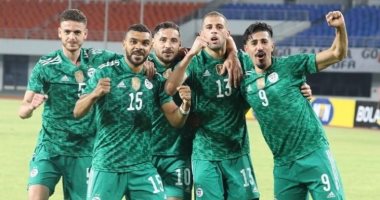 Tunisia and its Algerian counterpart aspire to take the lead in the first and second groups when the Carthage Eagles are guests of Zambia, while Burkina Faso receives the desert warriors in the second round of African qualifiers for the 2022 World Cup in Qatar.

The match between Tunisia and its host Zambia will start at 3 pm today, Tuesday, while the Algerian team will play at nine in the evening against its host Burkina Faso.

Tunisia will host Zambia at Levi Mwanawasa Stadium at 3:00 p.m. Cairo time. The Carthage Eagles are in the lead with 3 points, equal to their Zambian rival, who has the same balance, while Mauritania and Equatorial Guinea are at the bottom of the standings without points.

Tunisia opened its campaign in the African qualifiers for the FIFA World Cup Qatar 2022, with an important victory over Equatorial Guinea with three clean goals..

Zambia won its first match of the qualifiers in the first round, away from its stadium, against Mauritania, with two goals to one..

Tunisia aspires to continue achieving its second successive victory in the qualifiers and consolidate its lead, to ensure early qualification for the Qatar 2022 World Cup..

In the same case, the Zambia team seeks to be in the lead and remove the Tunisian team from its place, taking advantage of the preference of the land factor and the public in its favor in order to achieve its second victory in the qualifiers and ensure qualification. A team that is not easy, but the Tunisian team will do its best to be at the forefront and ensure qualification for the 2022 World Cup Qatar.

Today, at nine in the evening, Algeria will play an important match against Burkina Faso, in the second round of the African qualifiers for the 2022 World Cup..

The “Marrakesh Stadium” will be the scene of this World Cup summit, by a decision of the Confederation of African Football (CAF), due to the lack of Burkina Faso’s stadiums with the specifications imposed by the International Football Association (FIFA)..

The Algerian national team will play this match with a near-perfect formation, as it was confirmed that Sofiane Feghouli was key, after he missed the match against Djibouti due to his lack of physical fitness..

Youssef Atal will be the only absentee from this World Cup due to a muscle injury with his team Nice, during one of the French League matches..

According to the Algerian French-language newspaper, “Competition”, the Algerian national team will return to its traditional 4-1-4-1 method of playing..

The African champion played in an offensive manner (4-4-2), during the confrontation against the “Red Sea Sharks”, which he settled with a score of 8-0 scored by half of it, the veteran star Islam Slimani..

It is expected that Djamel Belmadi, the coach of the “Greens”, will present the following squad in the “Marrakech match”.“..

The Algerian national team has important cards on the bench, most notably Islam Slimani, the French Olympique Lyon striker, along with West Ham star Said Benrahma, and Rachid Ghazal, the former winger of Leicester City..

Algeria won its first match in the 2022 World Cup qualifiers, at the expense of Djibouti, 8-0, last week..

The Algerian national team is looking for victory in order to top the group with 6 points, and to approach the qualification for the final stage of the World Cup qualifiers, where the first place holder directly ascends.

Both the Algerian and Burkinabe teams are looking for victory in the confrontation that brings them together in the 2022 World Cup qualifiers, to be the leader of the group..