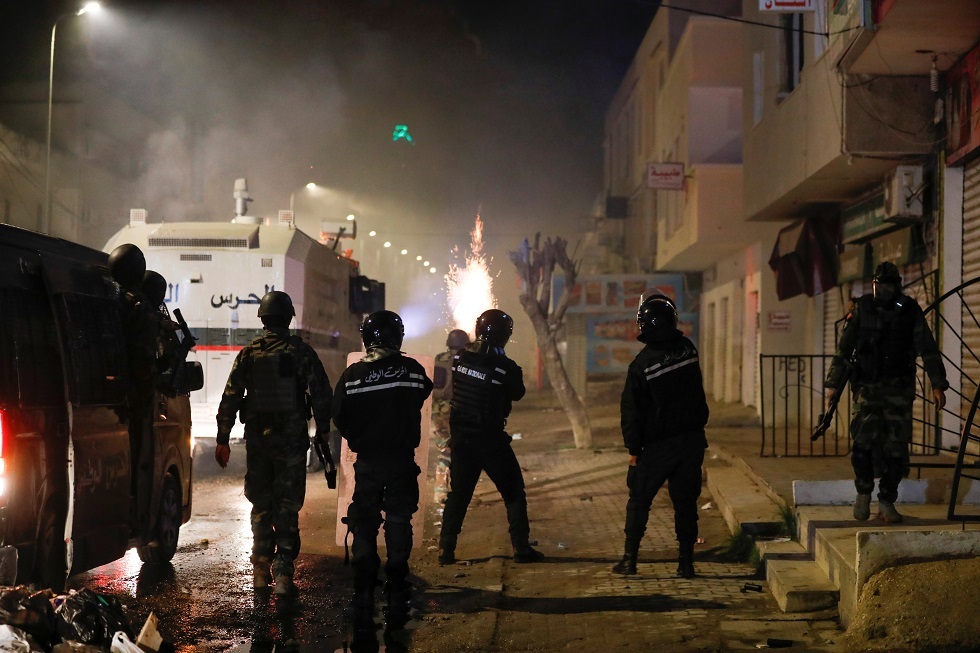 Violent clashes broke out Tuesday night between police and protesters for the fifth consecutive day in several Tunisian cities, including the capital Tunis and Sidi Bouzid, the birthplace of the Arab Spring uprisings.

In the capital, Tunis, violent night clashes took place in popular areas, including the Tadamon neighborhood and Sijoumi neighborhood, between the police and hundreds of angry youths who lit tires, blocked roads and threw Molotov cocktails at the police, and the police pursued them and fired tear gas canisters.

In Sidi Bouzid, where the Tunisian revolution sparked ten years ago, witnesses told Reuters that police fired gas to disperse protesters who were raising slogans against the authority and calling for an end to decades of marginalization.

There were also clashes between police and youths in the small coastal town of Qalaa.

Demonstrations erupted during the day in Tunis, the capital, and some other cities, demanding work, dignity, and the release of detainees, following night-time clashes and at a time when restrictions imposed to contain Covid-19 increase the wider economic suffering.

In an effort to quell the protests, Prime Minister Hisham Al-Mechishi addressed a speech to the people in which he said: “Your voice is heard, your anger is legitimate, and your frustration is understandable … and my role is to work to achieve your demands … Do not allow the saboteurs to be intrusive.”

He added, “The crisis is real, but chaos is unacceptable, and we will face it firmly, and we will not tolerate saboteurs.”

Earlier Tuesday, the Tunisian General Labor Union and other human rights organizations expressed support for peaceful protests in the face of “policies of marginalization, impoverishment and starvation”, accusing the state of squandering the hopes of the revolution.

Teen, 15, fails to resurface after jumping from a rock face into water in Sydney's southwest