Turin vs Juventus.. Allegri: We gave our best performances this season and the win is deserved 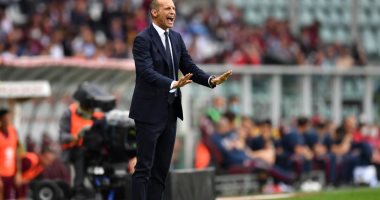 Juventus coach Massimiliano Allegri believes that the Bianconeri beat Torino today with one of his best performances this season so far, after achieving a fatal 1-0 victory today, Saturday, at the “Olympico de Torino”, in the seventh round of matches, from Italian Serie A competitions for the current season 2021-2022.

“We were a little bit steady in the first half, especially on the right side, and Kane was better at the end of the first half, but we lost possession several times, Torino lost its intensity over time and we moved more, so we moved more,” Allegri said. The more you move, the more the opponent loses sight of the reference points.”

He added: “Locatelli has stabilized well, he can improve a lot, he has started changing movements, so short and long passes only need to improve his position, after stopping international duty, we discovered the desire to defend when we needed to defend and attack when we needed to attack.”

He continued: “It was disappointing not to win a game after this performance, which after the first half against Milan, I feel it is our best of the season.”

On Moise Kean, he said: “Apart from losing the ball twice early on, he performed well, he is devastating when he runs towards goal, but he works on his technique, his first touch and control.”

He added: “It is a matter of experience, De Ligt is a good player, although he is 22 years old, and we do not forget that he came from a different kind of football, so in Italy he needs to improve his reading of situations and his aggressiveness in defences. He can only get better.”

With this result, Juventus occupies eighth place in the Italian league table with 11 points, while Turin occupies tenth place with 8 points.

After the age of 50.. you must take a multivitamin to control your mood

Several factors are complicating the search for Brian Laundrie

After Mohamed Salah’s meeting with Prince William.. I know the rules of etiquette for meeting celebrities with royals