Twenty Indonesian fishermen have been saved from a submerged boat following a coordinated response by a Japanese fishing vessel and Australian authorities.

The vessel was sinking 670 nautical miles west off the coast of Perth, Western Australia, on Thursday when Indonesian authorities notified the Australian Maritime Safety Authority (AMSA).

After days stranded at sea Japanese fishing vessel FUKUSEKI MARU 15 arrived to assist the crew on Saturday who were then transferred to HMAS Anzac. 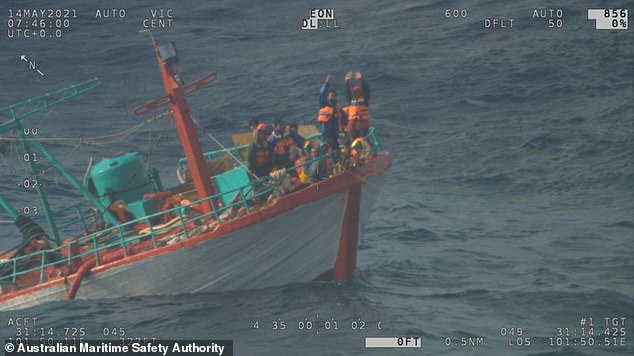 The Australian Maritime Safety Authority dropped life jackets to the fishermen and the ADF deployed life rafts to the crew on Friday.

A 33-year-old man had suffered a serious injury to his hand and was taken to Fiona Stanley Hospital in Murdoch, Western Australia, via helicopter for further treatment.

‘Yesterday, Japanese fishing vessel FUKUSEKI MARU 15 reached the Indonesian fishermen, whose boat was sinking, and was able to render assistance to those onboard,’ Mr Morrow said.

‘Their quick response was instrumental to the success of this time-sensitive mission. 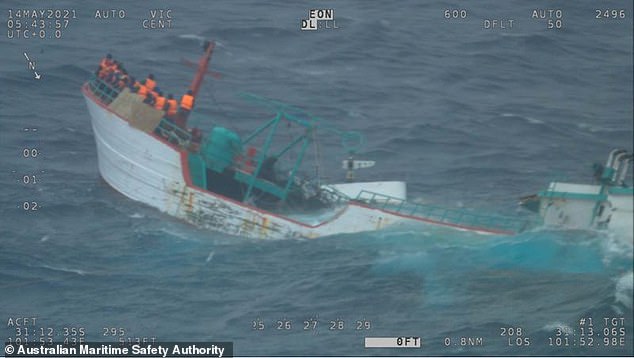 After days stranded at sea, Japanese fishing vessel assisted crew on Saturday and were later transferred onto HMAS Anzac (pictured)

‘HMAS Anzac was then able to arrive with medical and interpreter support for the rescued fishermen.

‘The successful saving of 20 lives at sea is an incredible achievement of which all responding authorities should be proud. We appreciate the assistance of the Australian Defence Force and FV FUKUSEKI MARU 15 in this search and rescue mission.’

Defence Minister Peter said HMAS Anzac was hours away from docking after a recent mission as families waited at the wharf – before the ship was redirected.

‘I also want to acknowledge the patience and goodwill of the families of Anzac’s crew, who are now waiting longer to see their loved ones following a long deployment,’ he said.

‘We will have your sailors back with you as soon as possible.

‘Their efforts in bad weather and high sea state should make all Australians proud. They helped save 20 lives.’

Police break up crowds in Barcelona after state of emergency lifted

A massive fire devours the homes of an Australian city, and helicopters intervene to extinguish the fire … Video

Strong to severe thunderstorms including large hail, damaging winds and tornadoes will impact the Central Plains...