The dance troop which twerked in front of a brand new warship to celebrate its unveiling has slammed the ABC for ‘deceptive’ editing.

The dancers from 101Doll Squadron say they feel ‘threatened, exploited and unsafe’ amid widespread criticism of their racy routine to unveil the HMAS Supply in Sydney on Saturday.

The group members performed prior to the arrival of dignitaries including Governor-General David Hurley and Defence Force chief Angus Campbell – but the ABC edited the footage to make it appear they were watching.

‘We found this very creepy and reflects more on the ABC’s camera operator and their need to sexualise these women and their dance piece for their own gratification,’ the group said in a statement.

The troop – which is made up of indigenous and multi-racial members – said they did not intend to be disrespectful and insist the footage was taken out of context.

Daily Mail Australia has contacted the ABC for comment.

‘I thought I was watching the Super Bowl there for a split second, I’ll be honest with you,’ she told Nine’s Today show.

‘Whoever made that call, it’s an absolute shocker for goodness’ sake.’

Senator Lambie added: ‘Good on those young ladies for getting out there, but I tell you, being half clothed outside a warship is probably inappropriate.

‘If that is the leadership in our defence forces, God help our sons and daughters who are serving.’

‘Standards in the ADF, and definitely when commissioning a ship, should be a little bit higher than that,’ he told the ABC earlier this week.

‘Our ADF shouldn’t be left or right; they should be straight down the middle of what their job is, and their job is to defend our nation, our interests, our values, our sovereignty, but also when we go on operations, have an unapologetic aggression and violence to get the mission done.’

He added: ‘We’ve gone a little bit woke over the past few years and we can’t afford to be doing that.’ 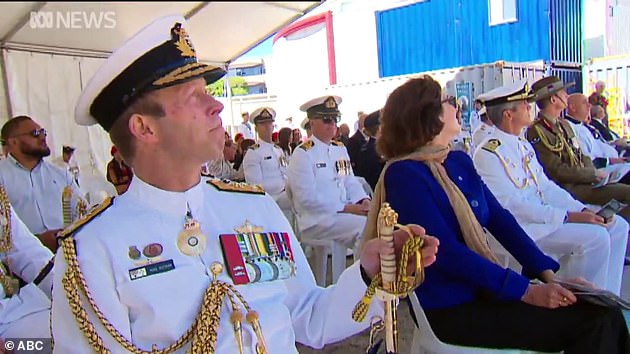 Others believed politicians should not worry about it and instead focus on the vaccine rollout and getting the nation open again following the Covid-19 pandemic.

What will the HMAS Supply will be used for?

The Australian Supply Class ships are based on the Spanish Navy’s Cantabria Class design.

The ships are intended to carry fuel, dry cargo, water, food, ammunition, equipment and spare parts to provide operational support for the deployed naval or combat forces operating far from the port on the high seas for longer periods.

In addition to replenishment, the vessels can be used to combat against environmental pollution at sea, provide logistics support for the armed forces, and to support humanitarian and disaster relief operations following a natural disaster.