By Katelyn Caralle, U.s. Political Reporter For Dailymail.com and Reuters

Twitter flagged one of President Donald Trump’s tweets Sunday as ‘misleading’ after he claimed he was immune to the coronavirus.

The social media site claimed that Trump violated its company’s rules about spreading misleading and potentially harmful information related to the virus and pandemic.

‘A total and complete sign off from White House Doctors yesterday. That means I can’t get it (immune), and can’t give it. Very nice to know!!!’ Trump said in a tweet, which has now been flagged by Twitter with a disclaimer. 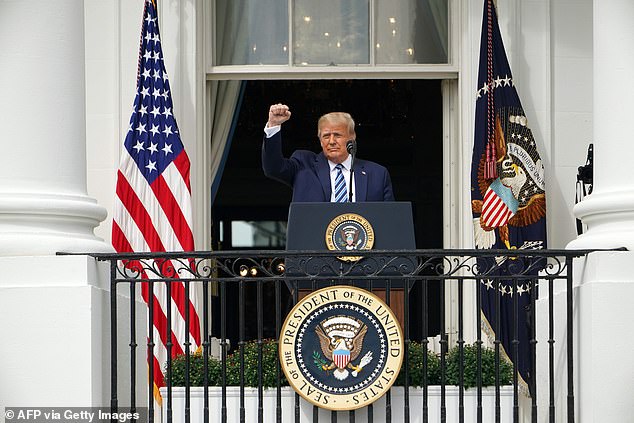 Trump claimed he could no longer get coronavirus or transmit it to others, which Twitter said is ‘potentially harmful information related to COVID-19’

It also prompts users to ‘learn more’ in a link that directs to a page on ‘helping people find reliable information’ about COVID-19.

Trump made the claim in a tweet after repeatedly telling Fox News’ Maria Bartiromo during a Sunday morning interview that he was ‘cured’ and now ‘immune’ from coronavirus just over a week after his initial diagnosis.

‘Once you recover, you’re immune,’ the president said during the 30-minute phone interview on ‘Sunday Morning Futures.’

He touted: ‘Now you have a president that’s immune.’

The comments also come the morning after he held his first in-person event since his diagnosis.

Trump received widespread criticism for hosting a ‘peaceful protest’ at the White HOuse where hundreds of supporters gathered on the South Lawn as he made remarks from the South Portico.

The Trump campaign began calling the president’s rallies ‘peaceful protests’ because that activity is still protected under the first amendment – even as states continue restrictions for social gatherings in the midst of the coronavirus pandemic.

Overnight October 1, the president announced that he and first lady Melania Trump had tested positive for coronavirus.

Just over a week after that initial diagnosis, Trump now claims he is cured and ‘immune.’

After his event Saturday, White House Physician Dr. Sean Conley released a memo stating the president was no longer at risk of transmitting the virus – but he did no explicitly say at the time if Trump tested negative.

The president said during his interview Sunday morning, that he passed the ‘highest standards’ and test and is now COVID-free

Boxing Day hunts WILL go ahead on Covid-secure trails

'I didn’t want to tell anyone I was claiming benefits'