The acting Customs and Border Protection commissioner was locked out of his Twitter account because he shared a tweet saying the border wall keeps out criminals from Mexico – a claim he has made on the social media platform several times in the past.

Mark Morgan, who has been in the acting commissioner role since July 2019, said one of his tweets was removed and he was locked out of Twitter account for posting support for the wall.

Morgan claimed that rolling back Trump’s immigration programs, including stopping construction of the border wall, would lead to an ‘invasion’ of illegal immigrants.

‘The wall system we’re looking at right now, it works,’ Morgan said during remarks in Texas on Thursday.

Acting Customs and Border Protection Commissioner Mark Morgan was locked out of his Twitter account for a day after making a post that claimed Donald Trump’s southern border wall was keeping out ‘murderers, sexual predators, and drugs’ 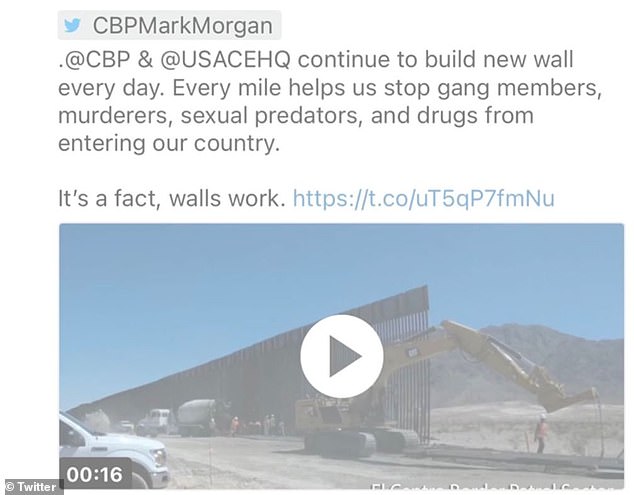 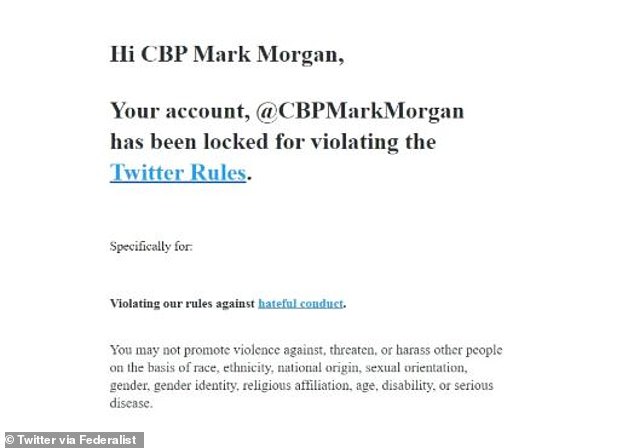 Morgan shared the Twitter notification he received with The Federalist, which claimed he ‘violated our rules against hateful conduct,’ alleging he either ‘promoted violence against, threatened, or harassed’ a minority group based on them being a minority 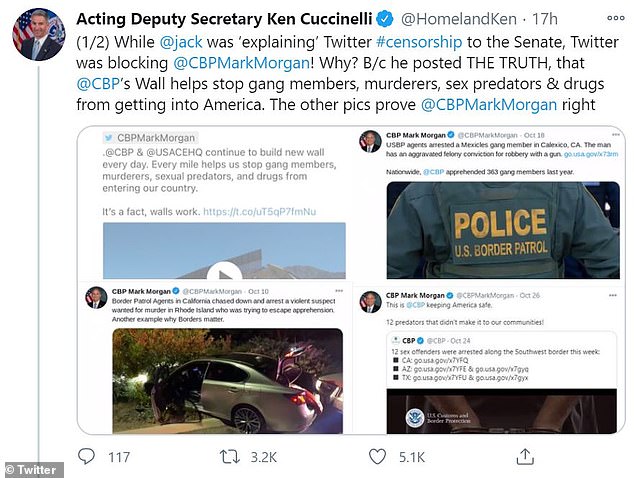 Acting Deputy Secretary of the Department of Homeland Security Ken Cuccinelli posted an image of the now removed tweet, which shows as a blank on Morgan’s Twitter profile between two tweets along with the word, ‘This Tweet is no longer available.’

‘While @jack was ‘explaining’ Twitter #censorship to the Senate, Twitter was blocking @CBPMarkMorgan! Why? B/c he posted THE TRUTH, that @CBP’s Wall helps stop gang members, murderers, sex predators & drugs from getting into America,’ Cuccinelli posted on Twitter, repairing the words that got Morgan locked out of his account. ‘The other pics prove @CBPMarkMorgan right.’

‘@CBPMarkMorgan had too much TRUTH for one tweet, so I had to extend this one…pictures of a drug seizure and a double Wall coming right after this one. @jack will only let me put 4 pics on here…’ Cuccinelli continued.

Twitter CEO Jack Dorsey, along with Facebook CEO Mark Zuckerberg and Google CEO Sundar Pichai, were summoned to Capitol Hill Wednesday to discuss their handling of politics on their respective platforms.

Dorsey specifically came under fire for Twitter censoring or flagging some of President Donald Trump’s tweets, but not doing so with Holocaust denial tweets and those calling for the destruction of Israel from Iranian leader Ayatollah Ali Khamenei.

‘They didn’t lock me out, they locked you out,’ Morgan said Thursday of Twitter blocking him from speaking to the American people. ‘They imposed their own ideology, their own belief system to justify keeping the truth from the American people because it didn’t fit their very obvious and transparent agenda.’

The comments came during a press conference Thursday morning in Texas’ Rio Grande Valley to celebrate 400 miles of Trump’s border wall being completed.

Morgan referred to the feat as an ‘incredible milestone,’ and called the wall system along the U.S.-Mexico border an ‘essential part of a decades-long, multi-faceted strategy of infrastructure, technology and personnel.’

He also defended his now-blocked tweet and previous ones with the same sentiment.

‘My tweet intended to educate the American people that borders matter and the great things done by the men and women of CBP and [the Department of Homeland Security] as a whole. My tweet was intended to emphasize that border security is national security,’ he said. 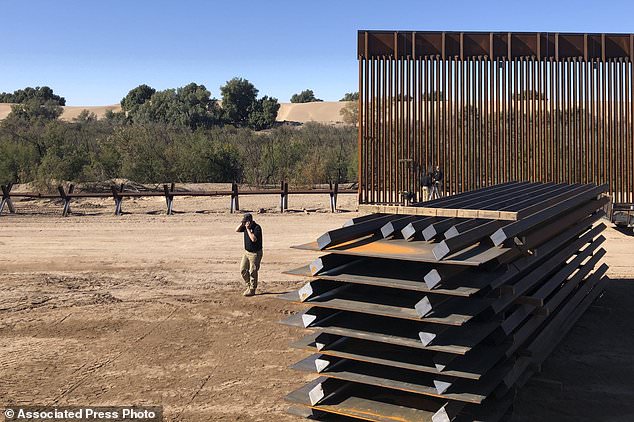 At a press conference commemorating 400 miles of border wall built under Trump,  Morgan said, ‘They [Twitter] didn’t lock me out, they locked you out,’ speaking of the American people. ‘They imposed their own ideology, their own belief system to justify keeping the truth from the American people because it didn’t fit their very obvious and transparent agenda’

Morgan shared with The Federalist an image of the message he received on the temporary ban on accessing his official Twitter account.

‘You may not promote violence against, threaten, or harass other people on the basis of race, ethnicity, national origin, sexual orientation, gender, gender identity, religious affiliation, age, disability, or serious disease,’ Twitter explained.

Morgan reasoned Thursday that the tweet had essentially read that border walls ‘are an important part of a multi layered strategy that assists the men and women of CBP to apprehend criminals,’ and was similar to ‘hundreds and hundreds’ of tweets he had sent out over the past few years.

While most of the wall went up in areas that had smaller barriers, the government built hundreds of miles of fencing as high as 30 feet in a short amount of time – most of it this year. But crews blasted hills and bulldozed sensitive habitats in national wildlife refuges and on American Indian land to do it, prioritizing areas where they could build more quickly.

The Department of Homeland Security waived environmental and other reviews to expedite construction. And despite President Donald Trump’s repeated promises that Mexico would pay for the wall, the construction has been funded by U.S. taxpayers for at least $15 billion, two-thirds coming from military funding.

In Texas’ Rio Grande Valley, where Acting Homeland Security Secretary Chad Wolf and other officials spoke Thursday, authorities have added just 7 miles to sections of stop-and-start fencing. That’s despite the region long being the busiest corridor for unauthorized crossings.

DHS officials have held several events announcing immigration operations this month in states considered competitive in the election. Polls show a tight race in Texas, which has not supported a Democrat for president since 1976. Stephen Miller, a top Trump adviser, told reporters Wednesday that ‘we have a president campaigning on having successfully built a border wall.’

Wolf and other officials echoed Trump’s campaign attacks Thursday at an official government event. Wolf criticized House Speaker Nancy Pelosi, judges who have ruled against the wall and what he labeled ‘outright lies in the press.’

Laiken Jordahl, a field campaigner for the Center for Biological Diversity Action Fund, has documented the destruction of sensitive areas along the border.

‘We’re seeing this administration just blow up anything in their path in order to build an additional mile of wall,’ he said. ‘None of this is about border security. It´s about inflating this mile count in order to make Trump look tough for reelection.’

Border Patrol Deputy Chief Raul Ortiz said this week that the agency was not pushing to build quickly this year in case Trump loses to Democrat Joe Biden, who has pledged to freeze any border wall construction if he wins.

‘For us, regardless of who’s sitting in the White House, I think giving the agents the tools and the resources are going to be awfully important,’ Ortiz said. ‘This infrastructure is important to us doing everything we can to control that border.’

Wolf claimed the new sections allowed agents to push border traffic into areas they could better control. But the Government Accountability Office has found that CBP couldn’t demonstrate how existing border walls improved security. Most drugs are smuggled through ports of entry, not across unfenced areas.

The Trump administration has enacted other measures to stop border-crossers, including new restrictions on asylum eligibility and a public-health declaration citing the coronavirus pandemic that allows agents to quickly expel most migrants.

As of last week, 381 miles of wall have been completed during the Trump administration. More than 270 miles were built using part of the $10 billion that Trump took from military funding under a national emergency he declared last year after Congress refused to meet his request for wall funding.

Congress has funded about $5 billion for border barriers under Trump, including more than $3 billion in the last two fiscal years for construction in the Rio Grande Valley and around Laredo, Texas. Of the more than 150 miles funded by Congress in the last two years, just 5 miles have been built.

The government faces significant obstacles in Texas, where the border is formed by the Rio Grande and the river floodplain is governed by international treaties. Much of the land is privately owned. While government attorneys have filed dozens of condemnation lawsuits this year, many landowners have refused to allow agents onto their land or surrender property without a court order.

‘We’re still fighting it,’ said Lilly Cavazos Rodriguez, whose family owns land in South Texas that the government has gone to court to seize.

‘We’re not willing to give up our land, so we’re going to fight as long as we can,’ she said.