Twitter is testing a feature that would let users remove a follower without blocking them.

Currently only available to some users on the web version of the platform, the option prevents a chosen user from seeing any of a person’s future posts.

To remove a follower, users with access to the test feature can go to their profile and click ‘Followers,’ then click the three-dot icon and select ‘Remove this follower.’

There’s no notification to the ex-follower, but they have the option of following again if they realize they’ve been removed.

The option is the latest in a series of moves the social media company has taken to increase user privacy. 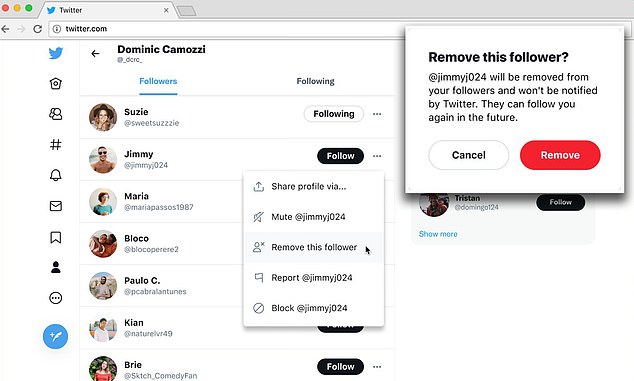 Twitter announced it is testing out a ‘Remove follower’ feature on its web version, allowing users to remove a follower without having to block them

Twitter is also apparently experimenting with allowing users to untag themselves from a conversation.

‘I want to make it easier to untag yourself from a tweet or conversation you don’t want to be involved in,’ Camozzi tweeted at the time.

‘Just pick ‘unmention yourself from this conversation’ from the more info menu and the link to your profile will be removed.’ 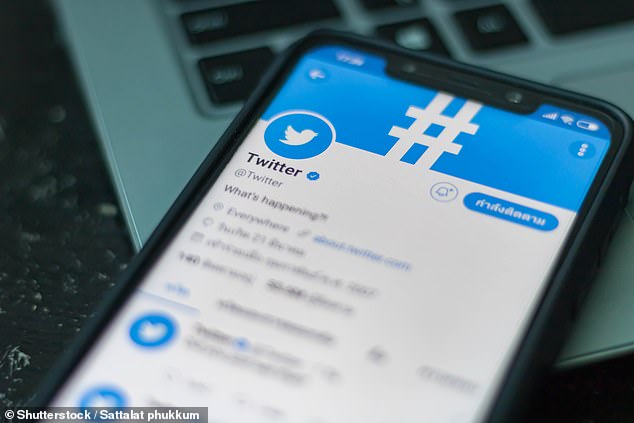 Twitter has been experimenting with a variety of ways to improve users’ privacy, including a ‘Trusted Friends’ feature that would only send posts to a select circle,  and letting users hide old tweets after a set period of time

Users would receive a notification if someone they don’t follow tags them, Adweek reported, and if they do opt to unmention themselves, the original poster won’t be able to tag them again.

In a followup tweet, Camozzi said that, based on feedback, the still-conceptual feature was being retooled and renamed ‘Leave this conversation.’

Twitter may also introduce the ability for users to prevent certain accounts from even mentioning them, or to block all mentions for one, three or seven days. 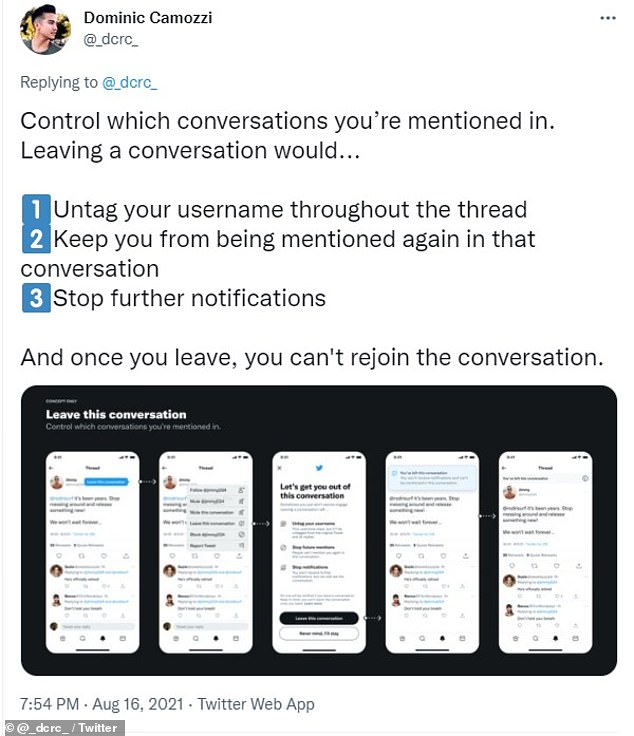 ‘Getting a little too much attention?’ Camozzi tweeted. ‘I want to make it easier to address that in three ways: Get notified when you’re getting a lot of mentions; review those tweets, and change settings to stop the situation from escalating further.’

In July, another Twitter designer posted that the company was working on a feature that could limit who receives your tweets.

The proposed ‘Trusted Friends’ feature could send posts to a select circle, and potentially put their tweets at the top of your feed.

Twitter may also let users hide old tweets after a set period of time, according to Bloomberg, with an expiration date that could take affect after 30, 60, 90 days or a full year.

Bloomberg also reported users may soon be able to control who sees which other people’s tweets they’ve liked.

The privacy options come as more and more users are facing consequences for tweets they thought long buried.

Not all the new features being worked on are about privacy, though.

On Tuesday, the Twitter support page also announced the company was testing edge-to-edge tweets that span the width of user’s timeline, ‘so your photos, GIFs, and videos can have more room to shine.’

Edge to edge Tweets that span the width of the timeline so your photos, GIFs, and videos can have more room to shine. pic.twitter.com/luAHoPjjlY

Earlier this month, the social-media giant finally launched its much-anticipated Super Follow feature, which allows creators to charge for exclusive content not available to ordinary followers.

In May, Twitter rolled out Tip Jar, a new in-app payment feature that allows users pay their favorite tweeters.

In March, the company confirmed it has been testing a paid ‘undo send’ feature that would give users five seconds to retract a tweet before goes live.

Germany wins the first half against Iceland with the double of Gnabry and Rudiger.. Video