At least two people are dead and a further eight wounded after a suspected terrorist opened fire on a crowd in central Tel Aviv on Thursday night before escaping on foot, Israeli police have said.

Terrified civilians were filmed desperately fleeing the scene of carnage along Dizengoff Street, one of the Israeli city’s busiest streets packed with bars and restaurants.

Police are moving house to house searching for the attack who is still on the run, officials said.

More than a thousand police officers, including elite police and military units, have joined the operation.

Tensions have been high after a series of attacks by Palestinian assailants killed 11 people just ahead of the holy Islamic month of Ramadan, which began nearly a week ago. Last year, protests and clashes during Ramadan ignited an 11-day Gaza war.

‘So far, 10 wounded have arrived at the trauma room of Ichilov Hospital,’ Ichilov Hospital said in a statement. ‘But unfortunately, despite the doctors’ efforts, two of the wounded died.’

It said four of those wounded in the attack were in ‘critical condition’ and undergoing surgery. 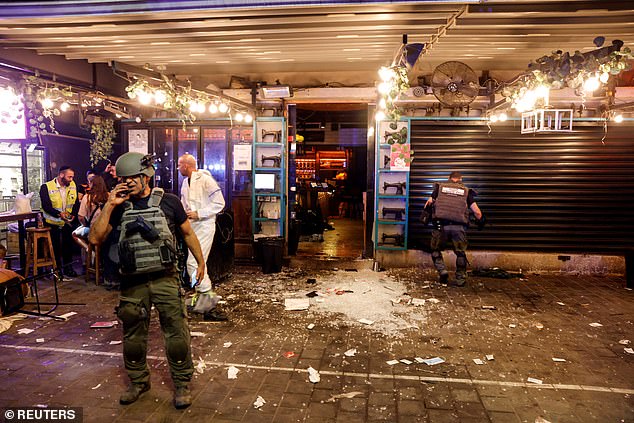 Two people are dead and eight wounded after a terrorist gunman opened fire in Tel Aviv city centre. Above: Israeli security and rescue personnels work by the entrance to a restaurant damaged in the attacks 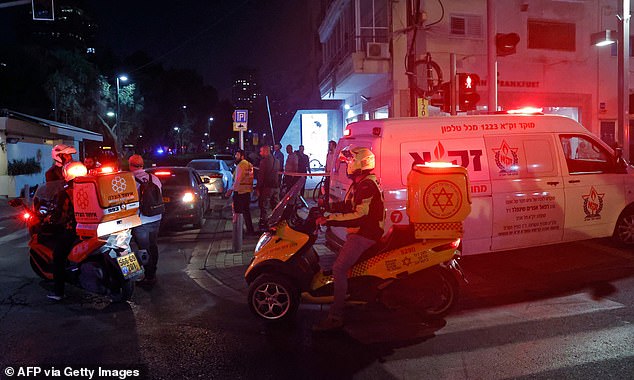 The attack took place at several spots along Dizengoff Street, one of Tel Aviv’s busiest streets packed with bars and restaurants. Emergency services arrive (above) at the scene of a shooting attack at a cafe 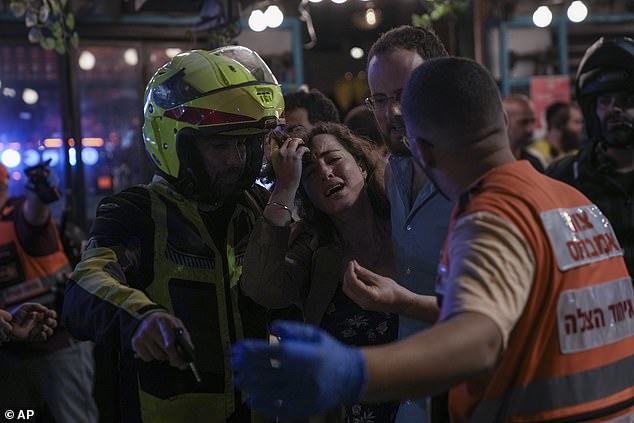 ‘A terrorist opened fire at short range and then fled on foot. Several people are wounded,’ police spokesman said. Above: First responders attend to people caught up in the attacks 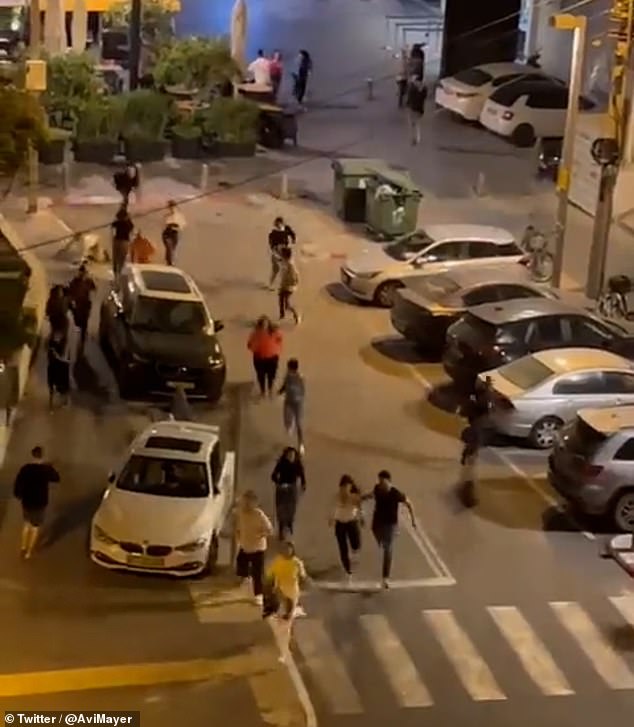 Live footage from Israel’s Kan broadcaster showed police flooding the area and training their guns on the upper story of a building. It also showed an explosion of some kind.

In a statement, police asked residents to stay inside during the incident ‘which is still ongoing.’

At least one shooting took place on Dizengoff Street, a central thoroughfare and popular weekend hangout. Police urged people to avoid the area.

Dizengoff Street has been the scene of several deadly attacks over the years. Most recently, an Arab citizen of Israel shot and killed two Israelis and wounded several others on the street in January 2016. 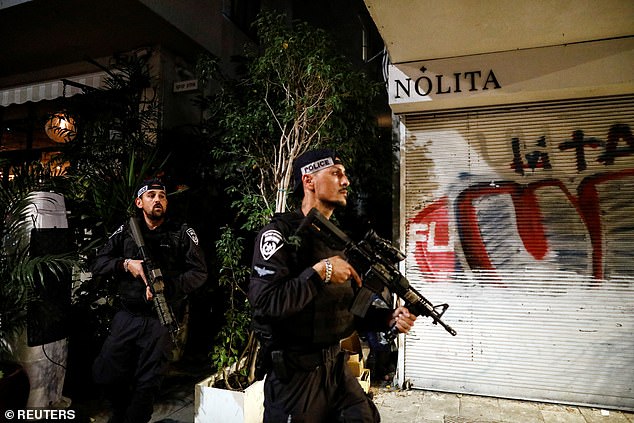 The gunman escaped on foot and it still at large, with heavily-armed Israeli security forces patrolling the area in force 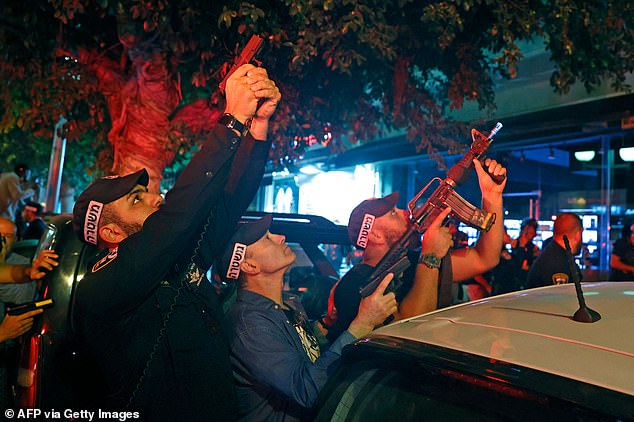 Security forces take aim at the scene of a shooting attack in Dizengoff Street. At least two have died in the attacks 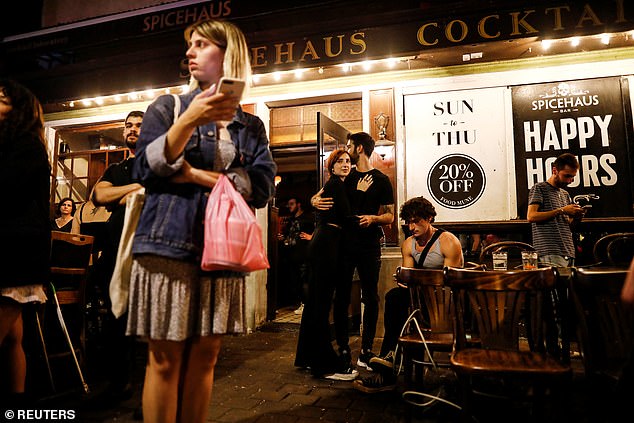 The gunman is reported to have opened fire on crowds in a busy tourist district of Tel Aviv, packed with bars and restaurants. Above: People hug at the entrance to a bar near the scene of the fatal shooting 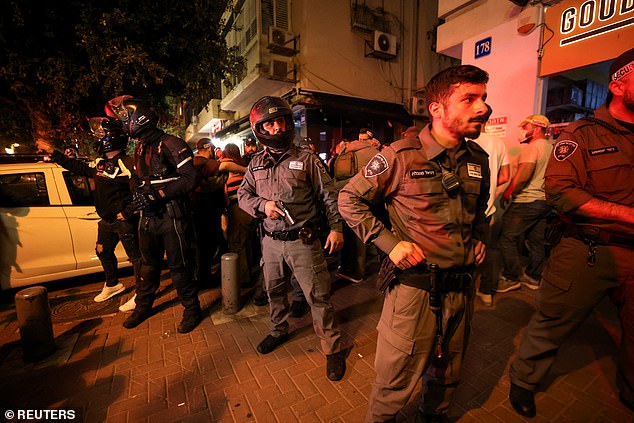 Tensions have been high after a series of attacks by Palestinian assailants killed 11 people just ahead of the holy Islamic month of Ramadan, which began nearly a week ago. Above: Security personnel at the scene

The popular nightlife area was packed on Thursday evening, the beginning of the Israeli weekend.

Prime Minister Naftali Bennett was monitoring the situation from the Israeli military headquarters, which is also in downtown Tel Aviv, his office said.

Israeli, Jordanian and Palestinian leaders have held a flurry of meetings in recent weeks, and Israel has taken a number of steps aimed at calming tensions, including issuing thousands of additional work permits for Palestinians from the Gaza Strip.

Prior to the attack, Israel had said it would allow women, children and men over 40 from the occupied West Bank to pray at the Al-Aqsa Mosque in east Jerusalem on Friday, the first weekly prayers of Ramadan. Tens of thousands were expected to attend.

The mosque is the third holiest site in Islam and sits on a hilltop that is the most sacred site for Jews, who refer to it as the Temple Mount. The holy site has long been a flashpoint for Israeli-Palestinian violence.

Israel captured east Jerusalem, the West Bank and the Gaza Strip in the 1967 Mideast war. The Palestinians want all three territories to form their future state.

The last serious and substantive peace talks broke down more than a decade ago, and Israeli Prime Minister Naftali Bennett is opposed to Palestinian statehood.

Israel annexed east Jerusalem in a move not recognised internationally and considers the entire city to be its capital.

It withdrew soldiers and settlers from Gaza in 2005, but along with neighbouring Egypt it imposed a crippling blockade on the territory after the militant Hamas group seized power from rival Palestinian forces two years later. Israel and Hamas have fought four wars since then.

He returned to Sydney in his $90million private jet on Thursday evening as he continues to fly back and forth between Australia and the US to manage his...