Two moped muggers took turns to stab a man for his £7,000 Rolex as he was murdered in front of his girlfriend, a court heard.

Danny Pearce, 31, was killed while walking home with Stephanie Holland after a night out at Oliver’s Jazz Club in Greenwich, southeast London.

Mr Pearce was stabbed and shot at on King William Walk on 15 July 2017 after he refused to hand over his watch to two men riding a moped.

One was David Egan, 24, who had carried out a series of moped robberies between 11 and 15 July with knives, a gun or both, Inner London Crown Court heard.

‘The offences were committed by two men on a moped who had been touring the Greenwich area looking for expensive watches,’ said prosecutor Louis Malby.

The couple left the club and were on King William Walk, being followed by their friends. 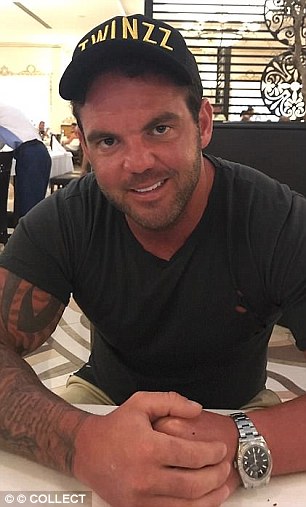 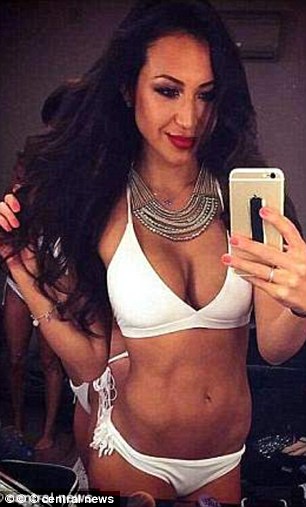 Danny Pearce, 31,  (left) was with his girlfriend Stephanie Holland (right) after a night out at Oliver’s Jazz Club in Greenwich, southeast London, when he was attacked

They intended to get some items from Mr Pearce’s car before getting an Uber home. 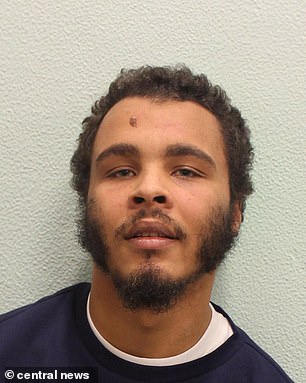 Jordan Bailey-Mascoll, 26, was jailed for 35 years for the murder during a moped robbery

As they walked up the road they were confronted by the two killers wearing crash helmets and balaclavas.

‘One of them had a pistol in his hand, described as an old fashioned revolver,’ said Mr Mably.

‘The other one had a knife in his hand and in Stephanie Holland’s view it was curved.’

The men shouted: ‘Give me your watch’ at Mr Pearce as they brandished the weapons at the couple.

‘Stephanie shouted, ‘Run!’ and ran back towards Nevada Street. As she was running down the street she heard shots fired.

‘They were real bullets that were being fired.’

Mr Pearce was chased up and down the road before Jordan Bailey-Mascoll, 28, stabbed him beside a parked car.

Egan then cornered him on the front steps of a flat where he was knifed again, the court heard.

Mr Mably told the court: ‘The attack has started, the confrontation is just taking place off camera. 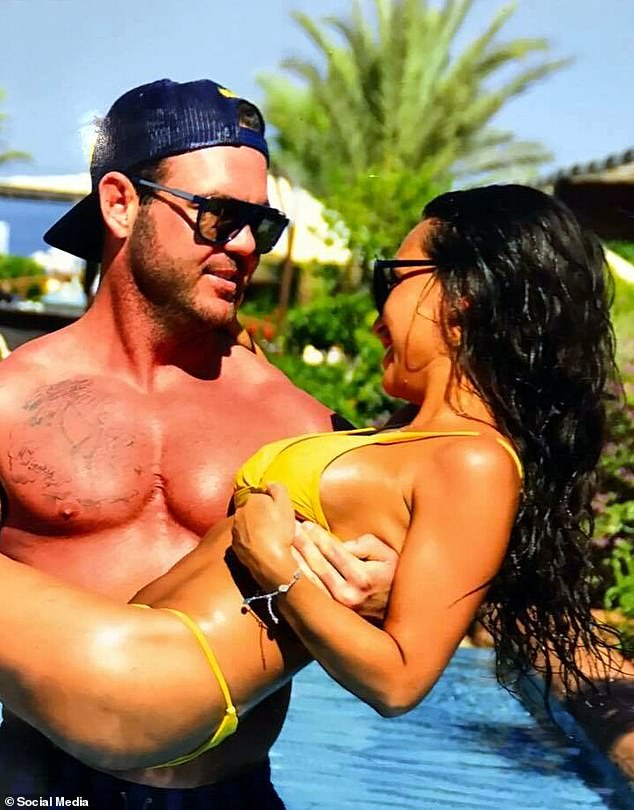 Danny and his girlfriend Stephanie, who pleaded with his attackers to spare Danny’s life, a court heard. The pair had been dating for a year

‘We are going to see as a man on foot chasing Danny Pearce to the pavement. They are going to go between the cars.

‘Mr Pearce, he has been stabbed by that time struggles back down the pavement.’ 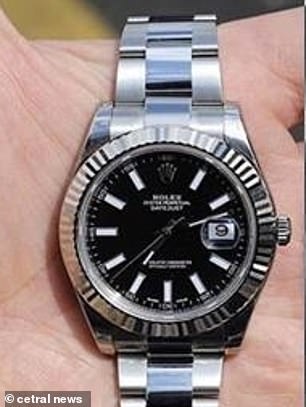 Mr Mably added: ‘When I said earlier these two men were working together. I can see one of them in the moped who is covering the chase after in fact both of them stabbing Danny Pearce at different times.’

The court heard a student in a nearby residence witnessed the attack and attempted to film on her phone.

But when she heard gunshots she dropped to her floor her phone still recording audio.

A harrowing recording of Mr Pearce’s last moments and his girlfriend’s anguished cries was played in court.

‘This was after the incident over the bonnet, just as the second chase was taking place, before Danny Pearce ran on the street and was knocking on the door of number 9 before he was cornered,’ added the prosecutor.

Mr Mably said: ‘Quite by chance there was a camera pointing right at the steps, and it covered the area of the steps and the bonnet of the car.

‘There were two things that happened that we would have never been aware about.

‘The first, is that as well as the attacks at the bonnet of the car, as well as the steps, there was a lot more chasing up and down the street and that is caught on the CCTV. 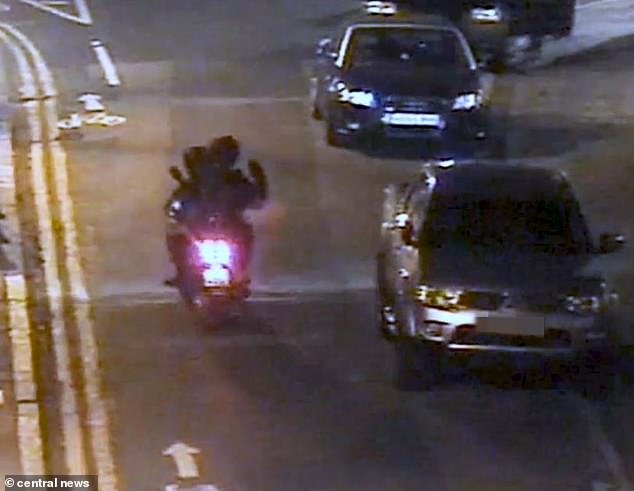 Jordan Bailey-Mascoll, on back of moped. Bailey-Mascoll and his accomplice were driving around on a moped, targeting people with expensive watches, Woolwich Crown Court heard

‘The second is perhaps even more significant, when the footage is examined you can see that the two men actually swap positions and they take it in turn to stab Danny Pearce.

‘It was the black car where the struggle took place over the bonnet, and that car was later found to have lots of spots of blood on the bonnet, Mr Pearce’s blood.

‘The steps were literally dripping with blood.

‘There is a wall on one side and railing on the other. Mr Pearce was trapped on those steps with this defendant attacking him with the knife.

‘He has already been stabbed by that stage by Bailey-Mascoll and he knew that he would be stabbed again. 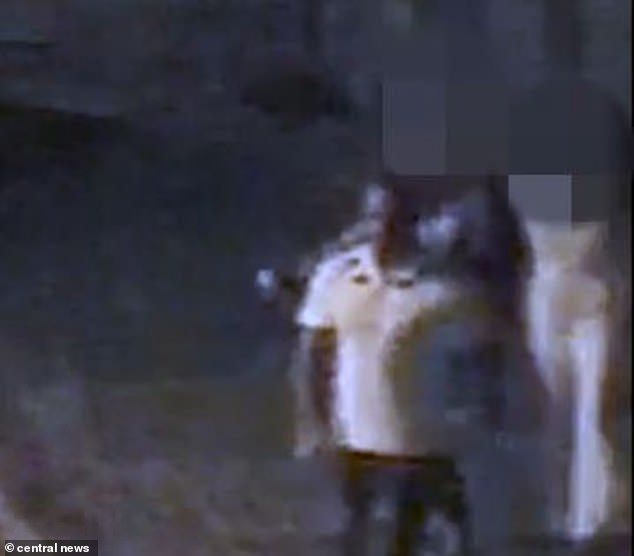 Danny Pearce (in white t-shirt) with friends shortly before the attack.  One balaclava-clad man was armed with a long ‘particularly gruesome’ hunting knife and the other a gun, court heard

‘He was banging on the door hoping someone would let him in, in the end someone did open the door but it was too late.’

Jurors heard the men pulled off Mr Pearce’s watch as Ms Holland ran back towards her boyfriend.

‘She was wearing high heels, she was running up and down the street trying to protect her boyfriend,’ Mr Malby said.

Mr Pearce was dragged into the flat but nothing could be done to save him.

He also denies possessing a gun in a public place, and possessing an imitation firearm with intent to commit an indictable offence.

Jurors were told Bailey-Mascoll has already been convicted of murdering Mr Pearce.

Product Title: Study Find out how to Construct A Legit On-line Enterprise Click here to get...