Two MORE cops were involved in death of black man, 33, who told officers ‘I can’t breathe’

Two more cops were involved with restraining a black man who died while telling officers ‘I can’t breathe’ in March, it has been revealed, as the other four cops who arrested him remain on paid leave and his family accuses the police of a ‘coverup’.

Manuel Ellis, a 33-year-old father-of-two, died of oxygen deprivation on March 3 after being pinned to the ground by cops and having a spit hood put over his head as he walked home from a convenience store with a snack.

Tacoma police say they spotted him trying to get inside a car and that they restrained him when he violently threw one of the cops to the ground.

But bystander footage released in June cast doubts on this version of events as it showed Ellis being aggressively beaten and restrained by the officers.

His death was ruled a homicide by the Pierce County Medical Examiner’s Office in June but no one has been charged in connection to his death. 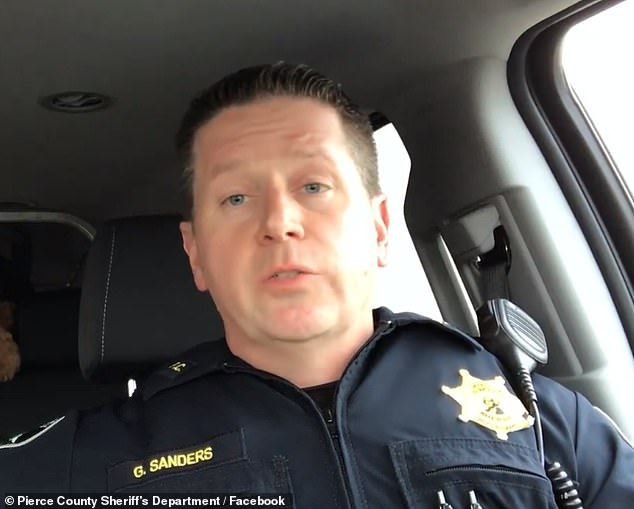 Two more cops were involved with restraining a black man who died while telling officers ‘I can’t breathe’, it has been revealed. Pierce County Sheriff’s Office Det. Sgt. Gary Sanders (pictured), who was off duty at the time, also helped to shove the 33-year-old’s leg into a hobble to hogtie him while he lay handcuffed and prone on the pavement 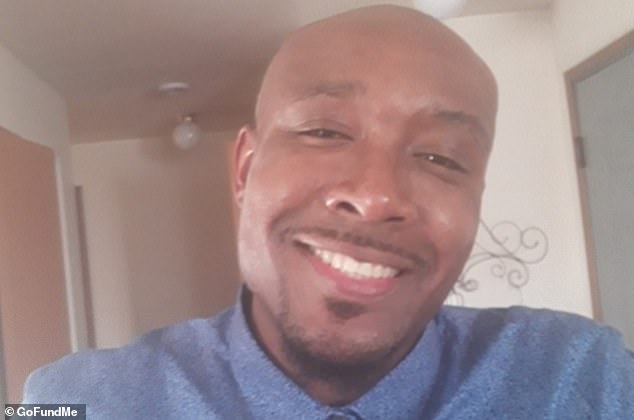 Manuel Ellis, a 33-year-old father-of-two, died of oxygen deprivation on March 3 after being pinned to the ground by cops and having a spit hood put over his head as he walked home from a convenience store with a snack

Ten months on from the incident, authorities have now revealed that two additional law enforcement officers were also involved in the restraint of Ellis that led to his death.

Pierce County Sheriff’s Office Det. Sgt. Gary Sanders, who was off duty at the time, also helped to shove the 33-year-old’s leg into a hobble to hogtie him while he lay handcuffed and prone on the pavement.

Neither officer has been suspended and they are being treated as witnesses and not targets of the investigation.

The four cops already identified in the incident remain on paid leave.

The lawyer representing Ellis’ family said the sudden emergence of the new details points to a ‘coverup’ within the city and the Tacoma Police Department as they say the black man was ‘murdered’ by the group of cops.

That a fifth Tacoma officer – Farina – was also involved was not revealed until now and Ellis’ family said they were unaware any other officers were involved before this week.

Authorities had previously said an off-duty sheriff’s sergeant was at the scene but Sanders, a 20-year veteran, had also not been named.

The presence of the sheriff’s sergeant only came to light when the Pierce County Sheriff’s Department was disqualified from its role as the independent investigating agency for conflict of interest when it emerged one of its own was at the scene. 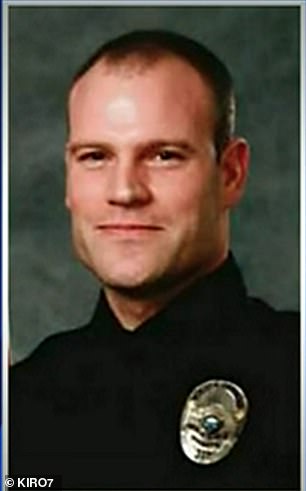 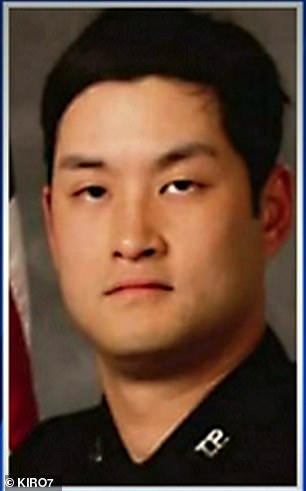 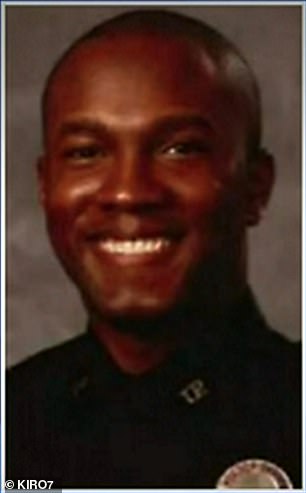 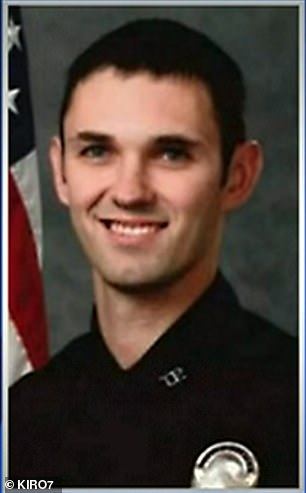 The newly-released records show that Collins and Burbank were the first law enforcement officers on the scene, according to the Seattle Times.

Ford and Rankine then arrived by which point Ellis was already in cuffs.

Burbank continued to hold Ellis down while the other two relieved Collins, the records state.

Farina then arrived on the scene to find Ellis ‘face down in handcuffs which also had a hobble connected to them’, according to his police report, obtained by the Times. 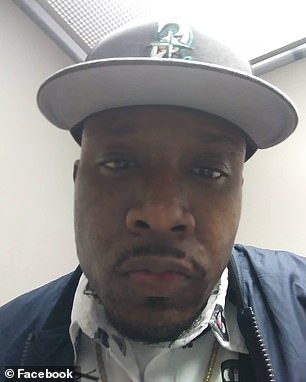 Manuel Ellis (above), a 33-year-old father-of-two, died of oxygen deprivation on March 3 after being pinned to the ground by cops and having a spit hood put over his head as he walked home from a convenience store with a snack. It has been revealed that two more cops were involved in his death

The officer then detailed how he put a spit hood over Ellis who had blood coming from his mouth.

‘The subject was alert and breathing and had blood on his face and coming from his mouth,’ the report says.

‘Due to his assaultive behavior I placed a spit hood over the subject’s head to protect everyone on scene from possible exposure.’

According to Sanders’ police report, he had finished his day shift at the sheriff’s department and was moonlighting at Pacific Lutheran University, when he responded to the call for assistance.

The sheriff’s sergeant said he arrived on the scene to see ‘four Tacoma police officers fighting with [Ellis].’

He said he helped place a hobble on the black man to hogtie him.

‘I just grabbed his foot and pulled it up toward his, his waist…he cinched it into the handcuffs, and then he was, there, he was pretty much contained at that point,’ the report states.

The revelation that more officers were involved in the restraint that ultimately killed Ellis comes a staggering 10 months after he died.

It also comes on the heels of numerous questions over the handling of the investigation into his death.

James Bible, the lawyer representing Ellis’ family, told the Times ‘it is clear that Manuel Ellis was murdered.’

‘It’s clear that he was on his stomach, that he was hobbled, that he was bleeding from his mouth and that he was telling officers ‘I can’t breathe sir’ when the officers so callously disregarded his humanity and then put a spit mask over his head,’ he said.

‘We believe that this incident implicates more than just the officers in this case, but an entire system in Tacoma and Pierce County.’

Bible also accused authorities of a ‘coverup’ as he said the release of Wednesday’s report was the first the family knew of the new details.

‘There was a remarkable coverup by the city of Tacoma and the Pierce County Sheriff’s Office,’ he told KIRO.

Ellis died back in March 3 but his case gained more attention in early June, after the release of bystander footage of his death and in the aftermath of George Floyd’s death.

Floyd, a 46-year-old black man, died on Memorial Day when a white cop knelt on his neck for almost nine minutes until he passed out while he begged for air saying ‘I can’t breathe.’

Footage of Ellis’ arrest was posted on Twitter by the Tacoma Action Collective, a racial justice group, in June. 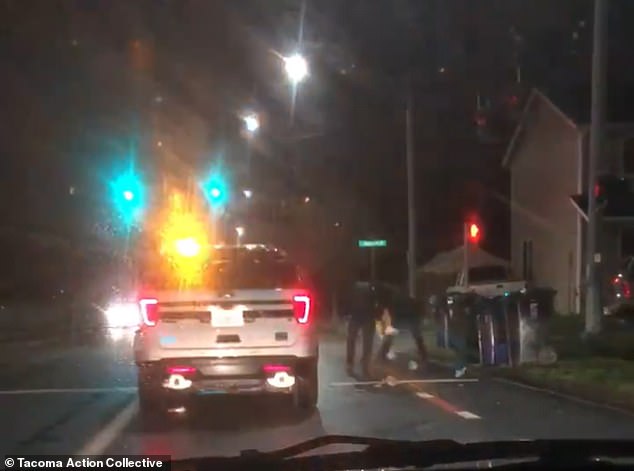 Footage of Ellis’ arrest was posted on Twitter by the Tacoma Action Collective, a racial justice group, in June. Officers are pictured in footage from the video aggressively trying to restrain Ellis 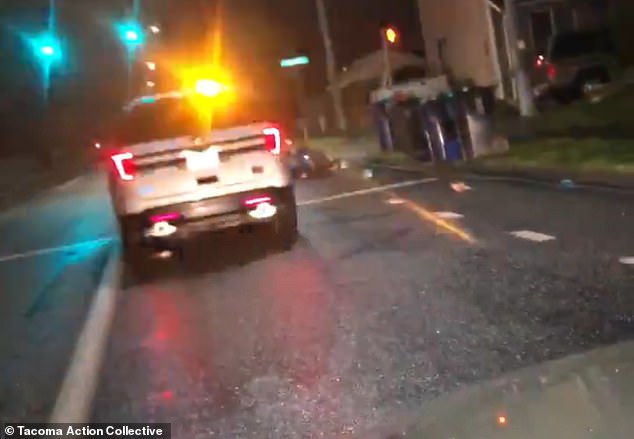 Ellis seen in the video on the ground, kicking at the officers in the footage shot by the witness from her vehicle n the witness video, a woman filming the arrest from her car is heard yelling out to the officers to stop 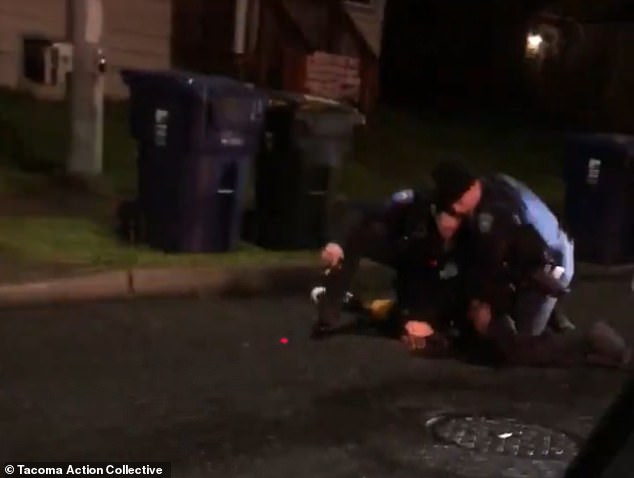 In the witness video, a woman filming the arrest from her car is heard yelling out to the officers to stop as they are seen throwing punches at Ellis, who is on the ground and kicking at them.

The officers are later seen in the footage holding down the man as the woman drives past them.

Accounts from the people behind the footage – Sara McDowell and Samuel Cowden – and the footage itself suggest Ellis was placed in a chokehold and shocked with a Taser, reported the Times.

Prior to the release of the footage, Ellis had only been heard in a recording of police radio yelling ‘I can’t breathe’ during the arrest. 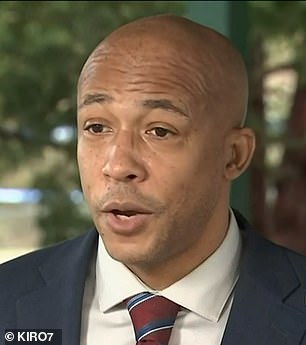 James Bible, the lawyer representing Ellis’ family, accused cops of a ‘coverup’ and said the black man was ‘murdered’ by the group of cops

According to police, Ellis started hitting their patrol car and asking to speak them about outstanding warrants against him.

Cops say he then picked up one of the officers by the vest and threw him on the ground.

They then tried to restrain him when he got combative on the floor, shortly before he died.

When the footage surfaced, protests erupted in Seattle demanding justice for Ellis and Tacoma Mayor Victoria Wooodards called for a full investigation and for the officers involved to face immediate firing.

The Pierce County Medical Examiner’s Office ruled that oxygen deprivation caused by restraint was the cause of death.

The four cops first identified were placed on administrative leave for two weeks after Ellis’ death and then returned to work.

After the coroner’s ruling, they were placed on leave again and continue to be paid.

Governor Jay Inslee also waded in to the case in the summer ordering an impartial investigation by the Washington State Patrol and taking it away from the Pierce County Sheriff’s Department on learning of the department’s sergeant’s involvement.

Attorney General Bob Ferguson will determine if any of the officers will face charges.

His office is also reviewing 20 other incidents of death or serious injury at the hands of law enforcement in the first half of 2020.

Suna: The resumption of the Renaissance Dam negotiations on Sunday