Dual Grand National winner Tiger Roll could race at Cheltenham next month in the Cross County Handicap Chase after starting the season with a sixth-place finish in a Flat race at Navan on Thursday.

Trainer Gordon Elliott said a pre-Christmas return to Cheltenham was a good option for the 10-year-old, whose priorities are a delayed tilt at a third victory in the Grand National after this year’s race had to be cancelled, preceded by a shot at winning the Cross Country Chase at the Festival for a third time.

Elliott, who runs Galvin in the Novices’ Chase as the track stages its first meeting of the season, said: ‘It was a good day out. Tiger Roll fell out of the stalls and was left 10 lengths, so, all things considered, we are very happy to finish sixth. He could now go Cheltenham in November for the Cross Country Chase.’ 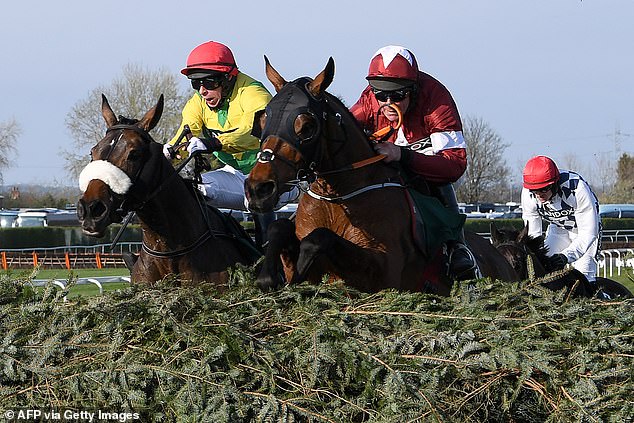 Tiger Roll ran in the race in 2018 when he finished fourth to Josies Orders.

After his sluggish start on Thursday, Tiger Roll stayed on in the mile and three-quarter race — less than half the distance of the Grand National — but was still beaten just under 30 lengths.

There were two winners on the Navan card for jockey Colin Keane, who has been installed by one bookmaker as favourite to be No1 jockey to Aidan O’Brien next year. That position is currently held by Ryan Moore and he will try to win the final Group One race of the domestic season when he partners O’Brien’s Dewhurst Stakes runner-up Wembley in the Vertem Futurity Trophy at Doncaster tomorrow.

Enable was yesterday ridden about for the last time by Frankie Dettori at Newmarket before she was transferred to owner Khaled Abdullah’s Banstead Manor Stud.