This is the shocking moment a toddler is strapped to a 30ft pole and catapulted into the air – before being dangled upside down by her ankle.

The crying two-year-old was part of a ritual at the Phuket Vegetarian Festival, also known as the Nine Emperor Gods festival, in southern Thailand on October 23.

Footage shows the youngster being tied to a huge wooden beam which is propelled forwards leaving her stranded more than 30ft in the air. 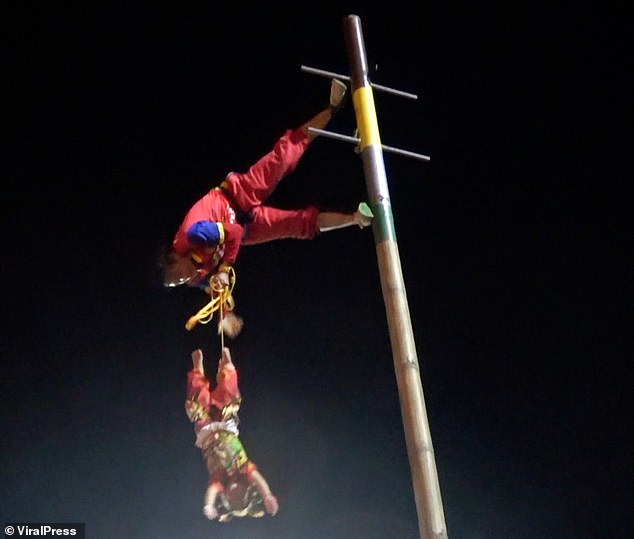 The toddler was dangled by her ankle at the Phuket Vegetarian Festival, also known as the Nine Emperor Gods festival, in southern Thailand on October 23

The little girl began crying before a man shimmied up the pole as he appeared to rescue her but instead began performing tricks and even dangling her by the ankle.

He put the child on his shoulders and thrashed back and forth before the pair waved to crowds as he balanced on metal poles sticking from the wooden beam.

In a heart-stopping moment, the man looks like he may fall, but as he regains his balance he dangles the child upside down.

He then tied a rope to the small girl’s ankle and dropped her from the top of the beam – stopping only a few feet before she hit the ground. 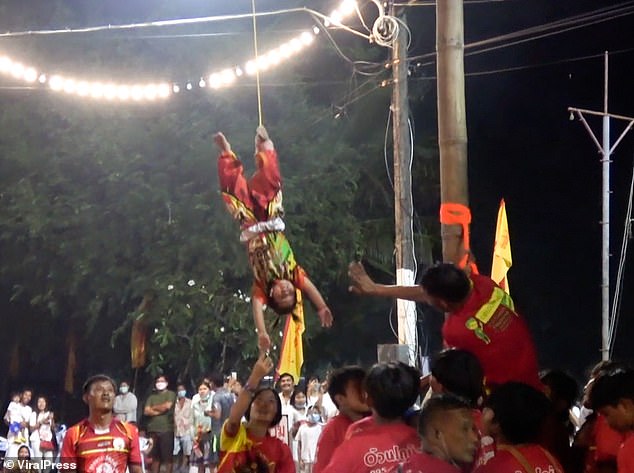 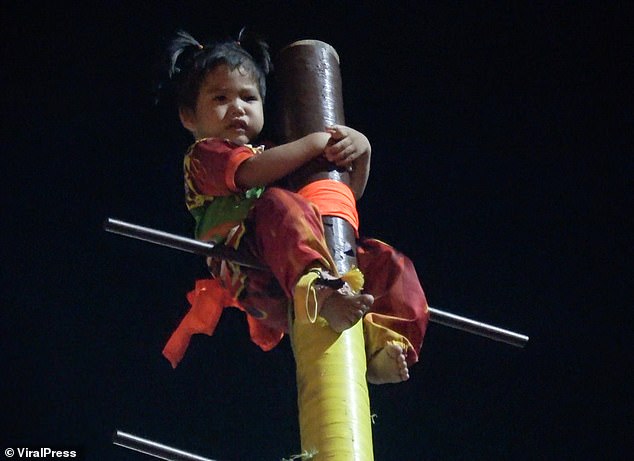 She was then hauled up and dropped two more times before the man slid down the pole with the little girl clutching his chest.

There were then displays with Chinese dragons and firecrackers from China.

A tourist who recorded the video said they were shocked when they saw the girl being attached to the pole.

They said: ‘I couldn’t believe what was happening when I saw her being tied to the wooden beam. She was only two-years-old.

‘I’m not sure if there was any special religious meaning to it or if it was just part of the show. But the girl definitely looked scared and I can’t say for sure that it was safe.’

The festival is best known for Thai-Chinese followers of the Taoist religion piercing their cheeks with skewers and hitting themselves with whips.

Followers of the religious event, which started on October 17 and lasted for nine days, raised no complaints about the display and cheered it on.

They believe that by entering a trance they are possessed by the Gods and the pain from the self-flagellation helps to cleanse their souls. 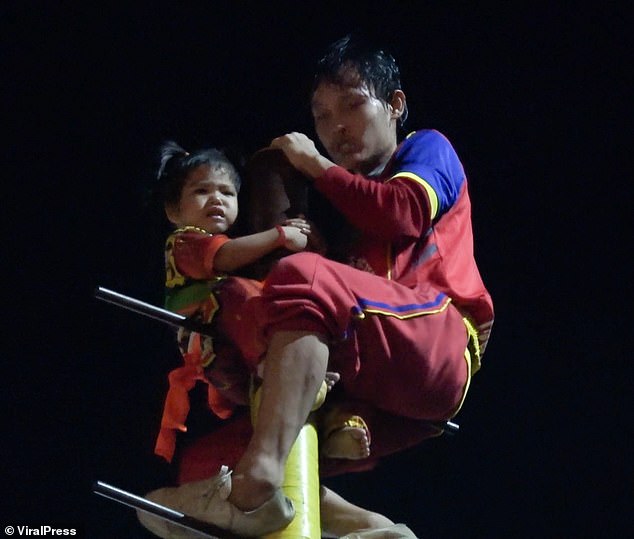 The pair sit at the top of the pole, perched on metal poles sticking out at the top, before the man dangles the small child through the air 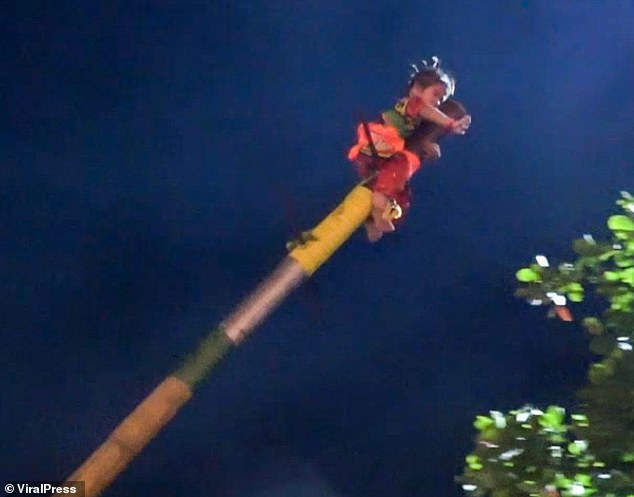 According to locals, the ritual started in the 19th century when a Chinese opera group visiting the island fell ill with a malaria epidemic.

They were doomed until they began worshiping the Nine Emperor Gods and cleansing their bodies, practices that have continued among believers.

Participants said this year’s festival had taken on extra significance because of the Covid-19 coronavirus pandemic.

Although travel restrictions meant that no international tourists were presents, locals carried on with the unusual events.

Many believe that the pain from the piercings is a way to absorb the ills of their community onto themselves and help to bring good luck back. 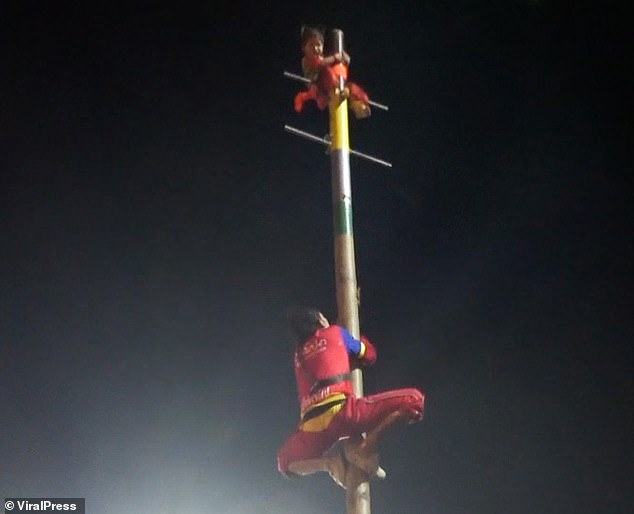 As the toddler begins to cry a man shimmied up the pole as he appeared to rescue her, but the pair instead start performing stunts 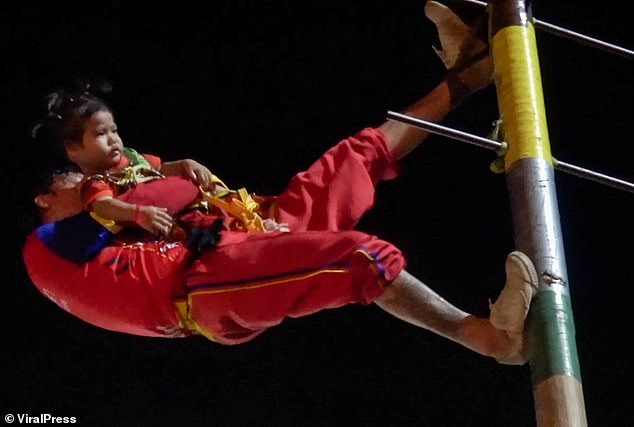 Devotee Warin Supattra, who took part in the ritual, said: ‘The world is suffering from the pandemic. Many followers have been affected, too.

‘Here there are no tourists anymore and people’s lives are hurting. They are having a very hard time. Everyone is in pain and I believe our actions will help.’

The festival takes place every year in the ninth lunar month of the Chinese calendar, and followers wearing white join the parades to cleanse their souls.

During the nine-day period, they will abstain from meat, alcohol, intercourse and bad behaviour. Pregnant and menstruating women must stay at home.

The festival is normally packed with tourists from around the world but Thailand closed its borders on March 22 and has not re-opened to holidaymakers since.

'I saw a big, white ghost dog in a haunted house'