A New South Wales highway patrolman has won over the internet after he came to the rescue of sisters stranded by the roadside of the busy M1 freeway.

Alanna Smith and her two sisters plus cousins Britt and Eb Perrin were left helpless when their car got a puncture near the Brooklyn Bridge over the Hawkesbury River, north of Sydney.

But passing motorcycle highway patrol officer Jon Beckerleg became a TikTok star when the shining knight stopped to lend a helping hand to the young ladies.

Within moments, he was inside the car’s boot to find the spare tyre for them before he got down to change the wheel for them.

And in the process he also gave them a quick lesson in how to do it for themselves in future.

The mystery cop’s kind act came to light when Alanna, 22, from Sydney, shared a video clip of the moment on her @.alannabanana TikTok channel.

The video – with the appropriate backing track ‘Bad Day’ by Daniel Powter – revealed how Britt had told the officer: ‘We don’t have a dad’ as he offered his help.

‘He made it his mission to teach us how to change a tyre,’ captioned Alanna on the video. As he undid the wheelnuts like a pro, she added: ‘Look at him go!’ 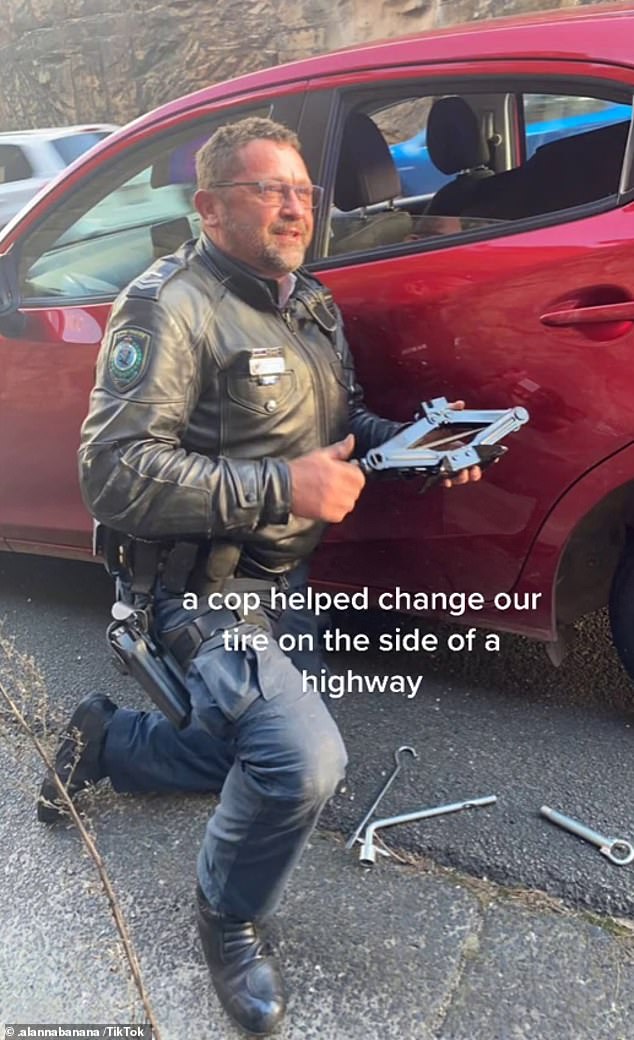 After replacing the wheel, the officer – wearing his highway patrol leather jacket – then showed the pair how to tighten the bolts on opposite sides.

As they filmed him riding off down the highway after his Good Samaritan act, Alanna added the caption: ‘Bye Dad’.

‘We were so grateful,’ Ms Smith told

The clip has been viewed 190,000 times in less than 24 hours after it was posted, with plenty of viewers praising the policeman’s good deed.

But it reached an even wider audience when New South Wales Police saw the video and reposted it on their Facebook page, quickly amassing thousands of likes.

‘The traffic officer stopped to help these people who weren’t sure how to change a tyre,’ NSW Police told Daily Mail Australia.

‘He was concerned for their safety and stopped to assist – and gave them a life lesson in the process too!’ 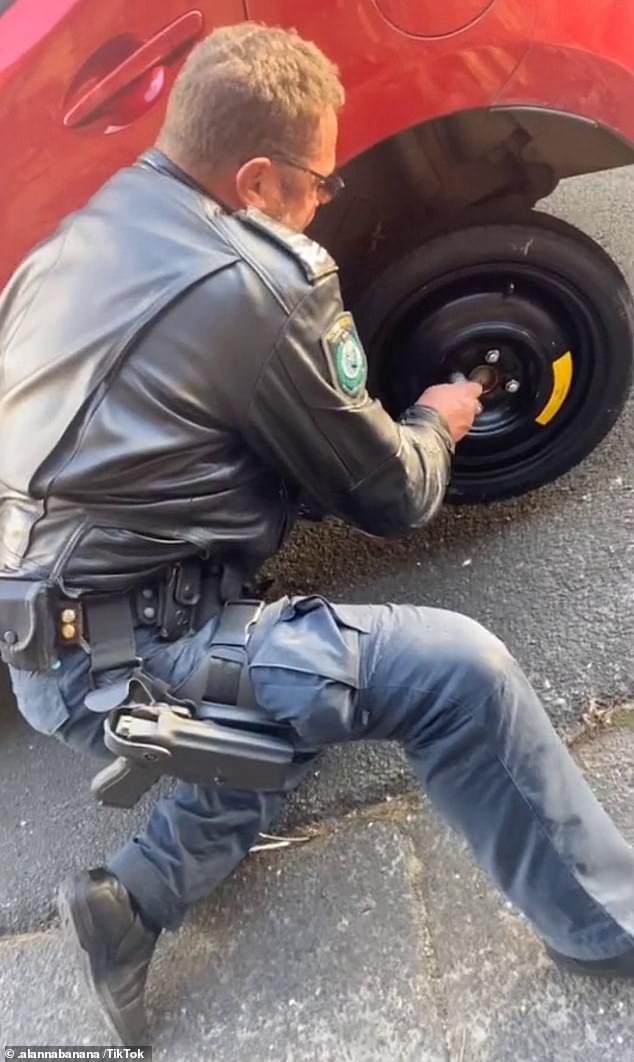 But others said the clip highlighted the need for basic car care maintenance to be part of driving licence requirements.

‘Great work from the officer. Hopefully he is rewarded for this,’ wrote Beggsy Beggs. ‘It does however show how woefully inadequate our driver training is.

‘This should be a requirement of getting your P plates. You should be able to check, and top up, all fluids, check tyre pressures, change a globe and change a tyre as a minimum.

‘If you can’t do this then you may be driving an unsafe vehicle.’