For all the anticipation of what both of these prize fighters would say it was the five minutes of silence that really set the tone here.

Tyson Fury and Deontay Wilder face to face once more, ready for a trilogy bout which a judge ruled for, robbing fans of a Battle of Britain that Fury wanted with Anthony Joshua.

Wilder was refusing to speak to his opponent, instead letting the silence speak for him but when words were said Fury vowed to ‘smash in Wilder‘s face for the second time’ in Las Vegas next month. 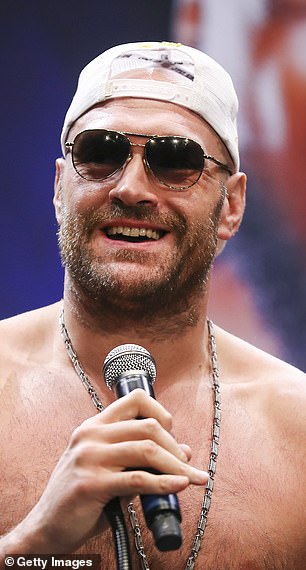 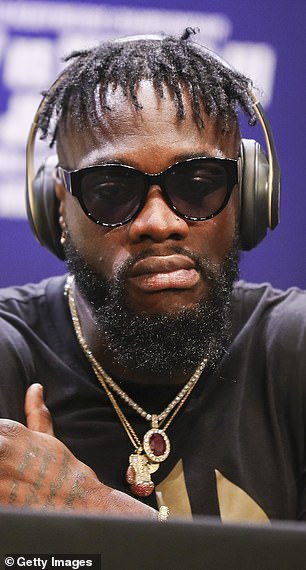 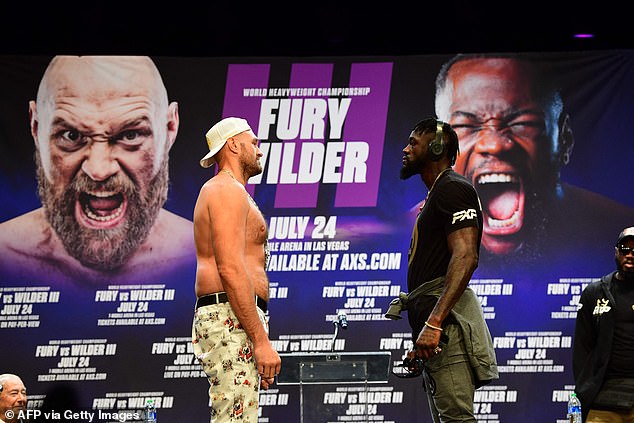 Not for the WBC title, not to add to the $70million dollars he banked in the past year, not for the glory, not for his legacy. But out of respect for ‘the biggest and most dangerous puncher in the history of boxing’ so as to knock him out first ‘in one or two rounds.’

Oh, and by the way: ‘Because I enjoy doing my job, which is a privilege at this difficult time when so many people are sadly losing theirs.’

Here in the City of the Angels the Gypsy King was in devilish mood as he launched the big sell for his legally enforced second rematch with America’s Bronze Bomber in Sin City on July 24.

Both said they would refuse to speak to each other on stage. Wilder was as good as his word, arriving late and only taking off his head-phones to make a short statement thanking God and his team and adding: ‘Time to stop talking and chop off his head. There will be bloodshed’

When he refused to listen to questions, never mind answer them, Fury mocked him by speaking for him.

Fury, who had revealed his plan to go from elusive to all out offence, came up with a simpler prediction this time: ‘I gave my game plan away the first time because he wasn’t good enough to do anything about it, I’ll do the same thing this time.

‘Deontay Wilder is a one trick pony, he has one punch power, we all know that, great. What I’ll do to him this time is run him over as if I’m an 18-wheeler and he’s a human being, I guarantee you it does not go past where it did before.

‘I’ve had 18 months of practicing what I’m gonna do to him. I want to get up to 300 pounds for this fight and I’m looking for the big knockout straight away.’ 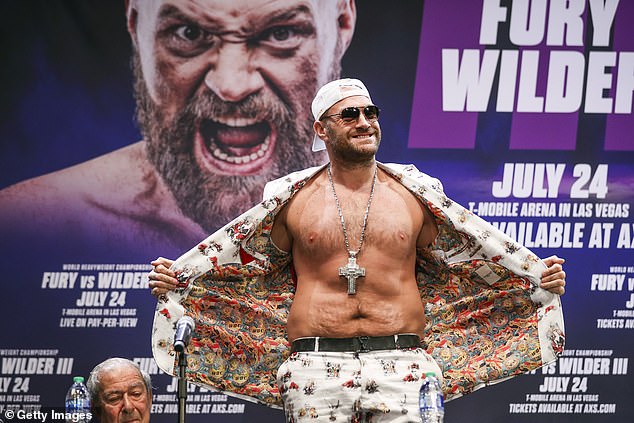 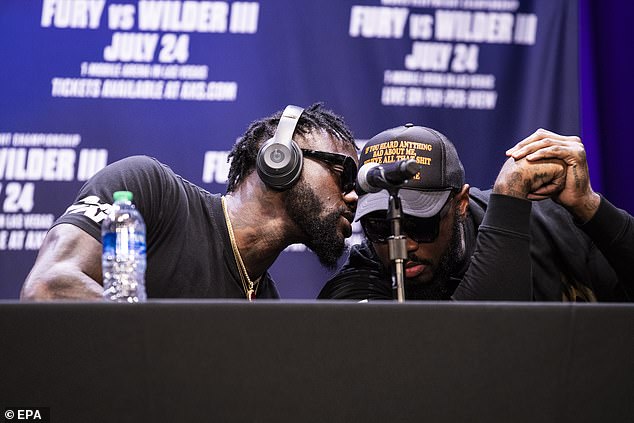 When asked his view on Wilder’s decision to stay silent, Fury added: ‘It shows how weak of a mental person he is and how much of an affect the beating from the last fight has taken an effect on his life.

‘I was worried about Deontay Wilder for quite a while after the defeat that I gave him, obviously he’s doing his little thing with his earphones on and doesn’t want to answer any questions, that’s up to him, I’m here to promote a fight.

‘No matter how much Malik teaches Deontay, Deontay will do what he wants. As soon as I hit him with the first right hand, he’ll see red and want to take my head off.’

Fury was at his most mischievous here when asked what he had done differently in training for his third encounter with Wilder, replying: ‘I’m increasing the number of times I w*** every day.

‘I did it seven times before I knocked him in out second fight in seven rounds. Now I’ve upped it to 10 to make sure I stop him even earlier.’ 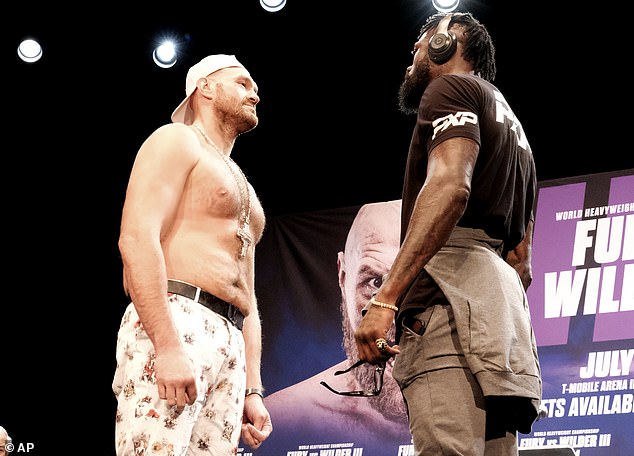 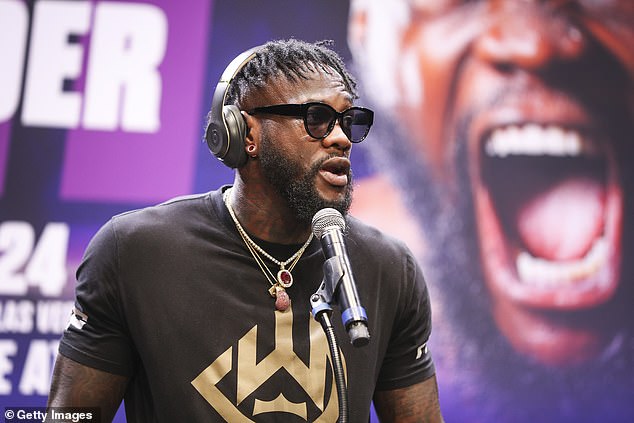 And what about all the insults and accusations of cheating Wilder sent his way by social media? Although he teased Wilder by saying ‘I have friends in high places so he has nowhere to hide,

Fury adds: ‘He doesn’t get under my skin.

‘I believe I can smash him again but I know that if he hits me perfectly just once it could be over, curtains, good night,’ he added.

‘I got up twice after he hit me in our first fight but that doesn’t mean I now know I can take every shot from the heaviest puncher of all time.

‘I’ve felt his power, if he catches me spot on just once in 36 minutes. I would never underestimate any opponent, least of all this.’ 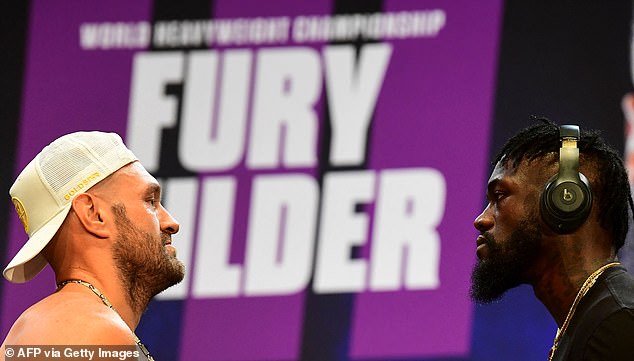 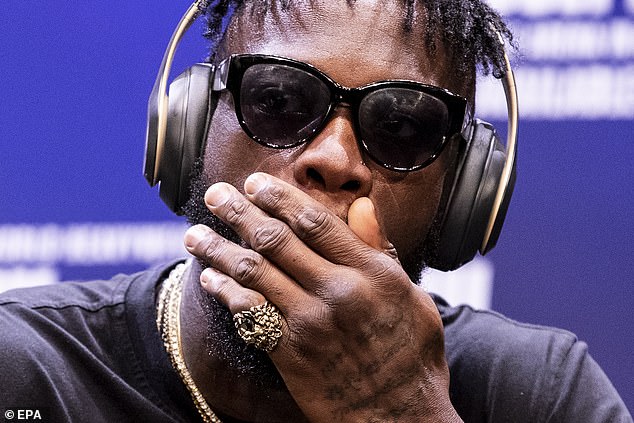 So as well as pleasuring himself more frequently, Fury says he has trained like a pedigree racehorse for what he calls: ‘A far tougher fight than that dosser of a pumped up body builder Anthony Joshua could ever give me.

‘That’s why the best dieticians, the best physical trainers, the best boxing men have been training me like I’m Secretariat, that great American thoroughbred.

Clearly, as well as the body, the mind games are working over time too. A key tool for Tyson, as he says: ‘Deontay isn’t intelligent enough to be better than me. But this is heavyweight boxing and anything can happen. I feel fantastic.

‘I believe that the Gypsy King is now the best boxer ever to pull on gloves. I think I’m unbeatable but it doesn’t turn out that I win so be it,’ he continued. ‘I would just move on to the next fight. Because fighting is what this Gypsy King was born to do. It brings me alive. 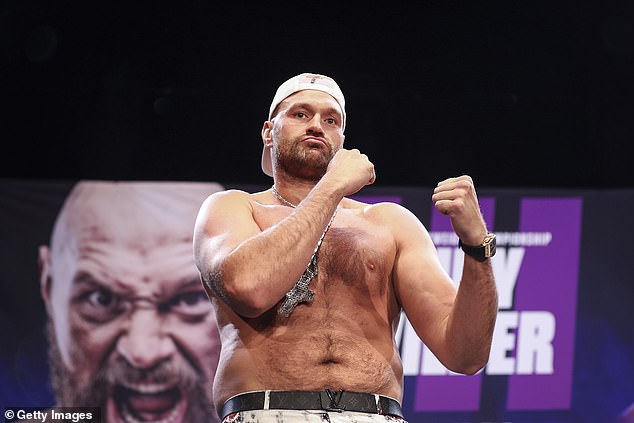 ‘I haven’t liked being out 18 months but so has Deontay. And I’ve got the experience of being out three years the previous time and he hasn’t. He doesn’t know how he will cope with that. I do.

‘I’m in a place now where what’s most important is waking up happy every morning. That and fighting. Not the belts. Not the money. Not the fame because that disappears as soon as you stop boxing.

‘I will just keep fighting until I can fight no more. That’s what we do.’

Fury was talking prior to the media launch of the fight. He and and Wilder had not spoken to each other, let alone been in the same room together, since their first rematch in February last year.

A few jibes and jests from the bare chested Fury was enough before they engaged in one of the longest stare downs on record, over five minutes before Wilder put his dark glasses back on. Wilder, no doubt, will need to find his voice come fight night.