U.S. survival camps with bunkers and guard towers will open after the presidential election


A chain of U.S. survival communities plan to activate and open to members for the first time over fears of violence following the presidential election on November 3.

Regardless of whether Republican President Donald Trump or Democratic challenger Joe Biden wins the election, Fortitude Ranch expects possible ‘looting and violence’ that could devolve into long-term, widespread clashes, the newsletter said.

Fortitude Ranch CEO Drew Miller said some on social media feared civil war, and he did not rule out the possibility. 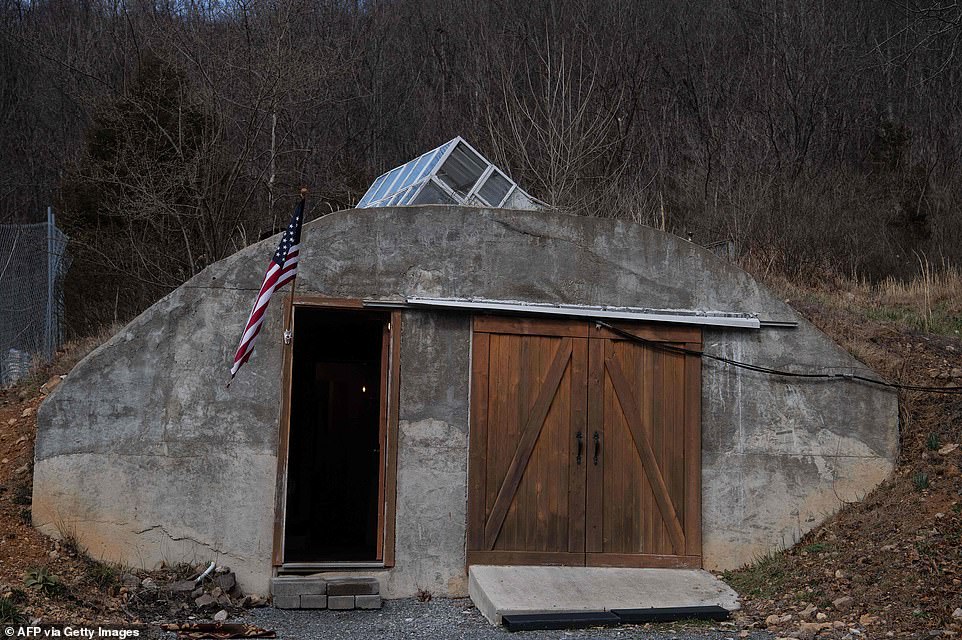 A survival bunker at Fortitude Ranch in West Virginia. The chain of U.S. survival communities plan to activate and open to members for the first time over fears of violence following the presidential election on November 3. 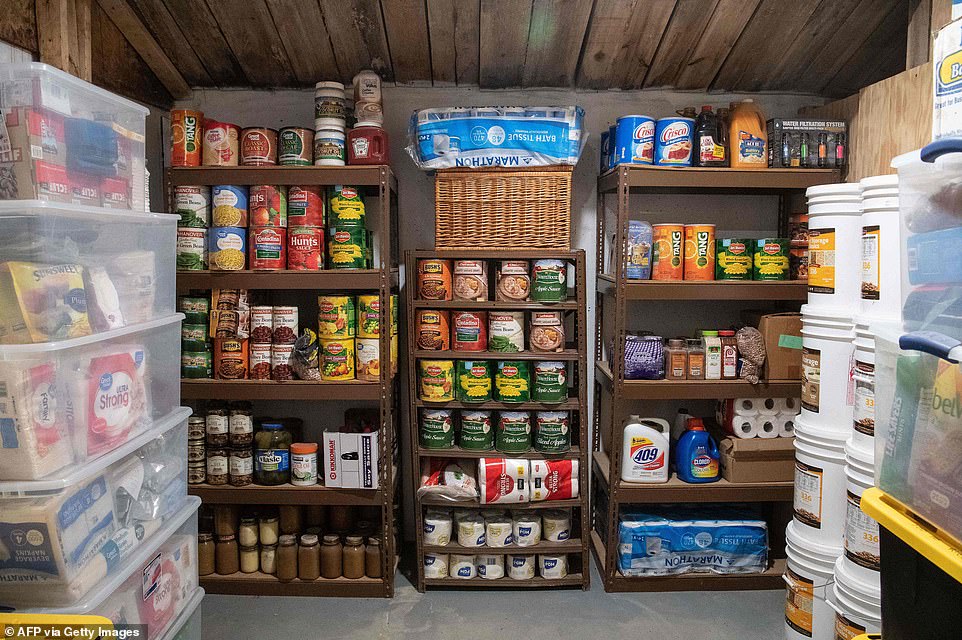 A storage room stacked with food is seen at Fortitude Ranch in Mathias, West Virginia. The company’s three locations will open on election day to protect members from ‘looting and violence’, the company’s October newsletter said 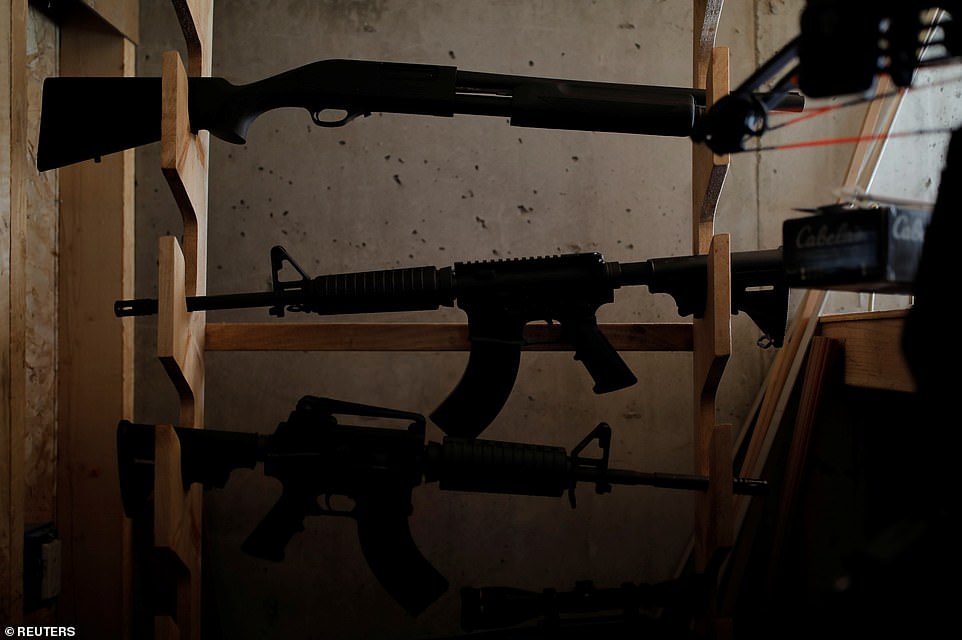 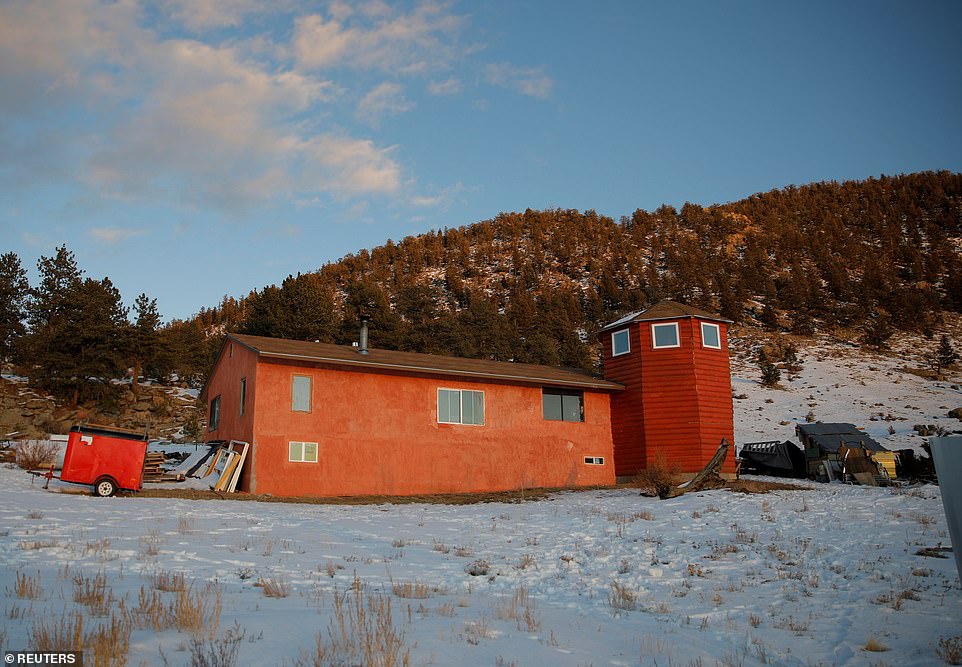 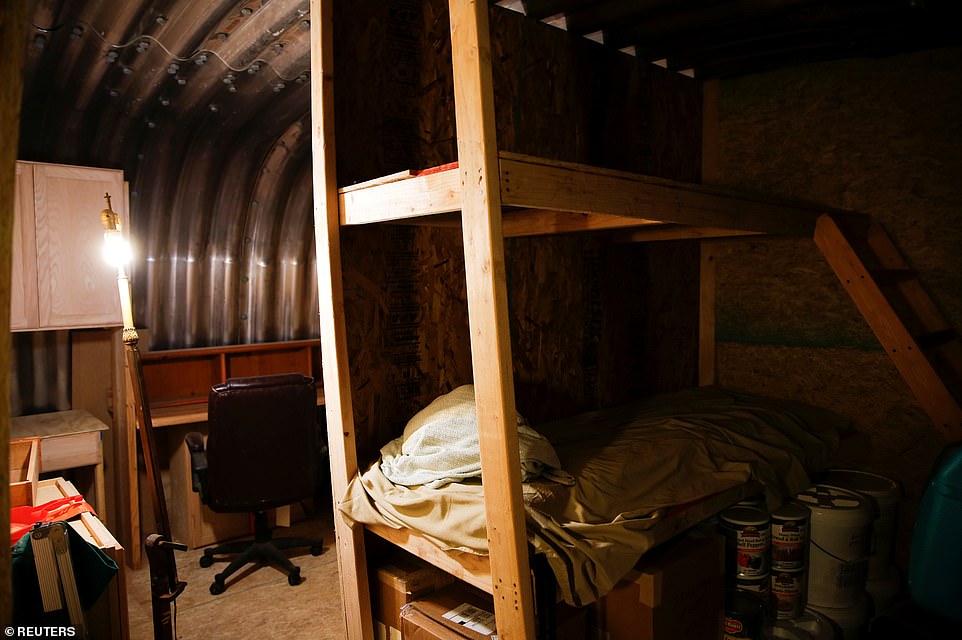 The interior of one of the bunkers in southern Colorado. Members can also vacation at the survival camp 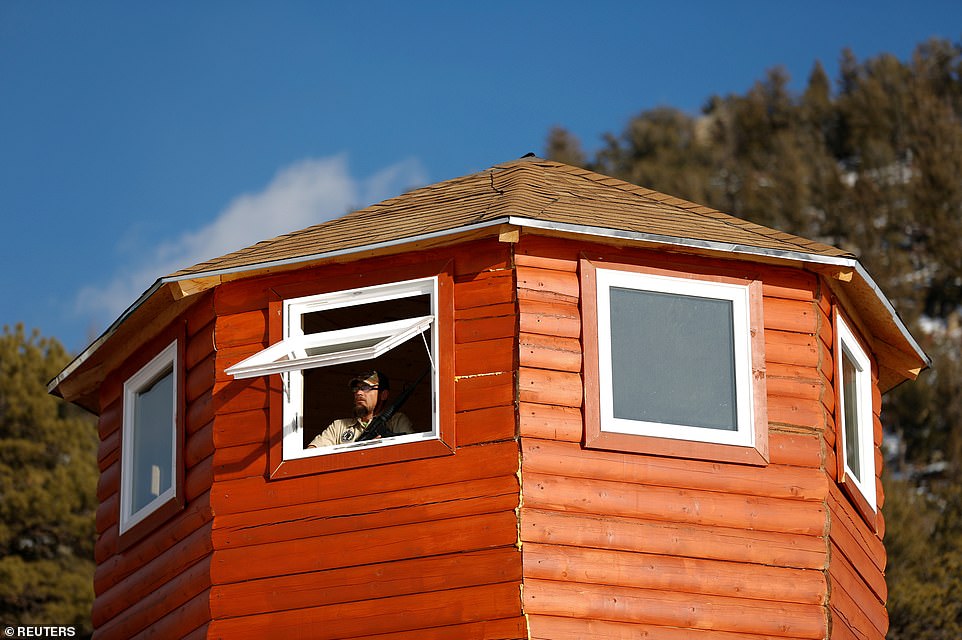 Kacey Dawson, assistant manager of a Fortitude Ranch camp, stands armed in a lookout tower at a survival camp in Colorado

‘This will be the first time we have opened for a collapse disaster, though it may end up not being so,’ said Miller, a former Air Force intelligence officer with a Ph.D. from Harvard in operations research.

‘We consider the risk of violence that could escalate in irrational, unpredictable ways into widespread loss of law and order is real.’

Fortitude Ranch set up its first camp in West Virginia in 2015 and has two more 50-acre locations in Colorado. The exact locations of the camps are kept a secret and are known only by members.

For an annual fee of around $1,000, members can vacation at camps in good times, and use them as a refuge in the event of a societal collapse.

Members are required to own either a rifle or shotgun to defend the communities.

The company does not disclose membership numbers.

Living by the motto ‘Prepare for the worst, enjoy the present’, residents live in underground bunkers that offer protection from nuclear blasts, sleeping on one of 500 bunk beds.

The bunkers are surrounded by a concrete wall ‘easily manned by defenders’.

The camp is flanked by four lookouts armed with guns so that other Americans don’t come and try to steal their food.

It also has wells, radio equipment, greenhouses and a farm with goats, chickens and cows.

Solar panels have been installed, allowing the camp to run off the grid. 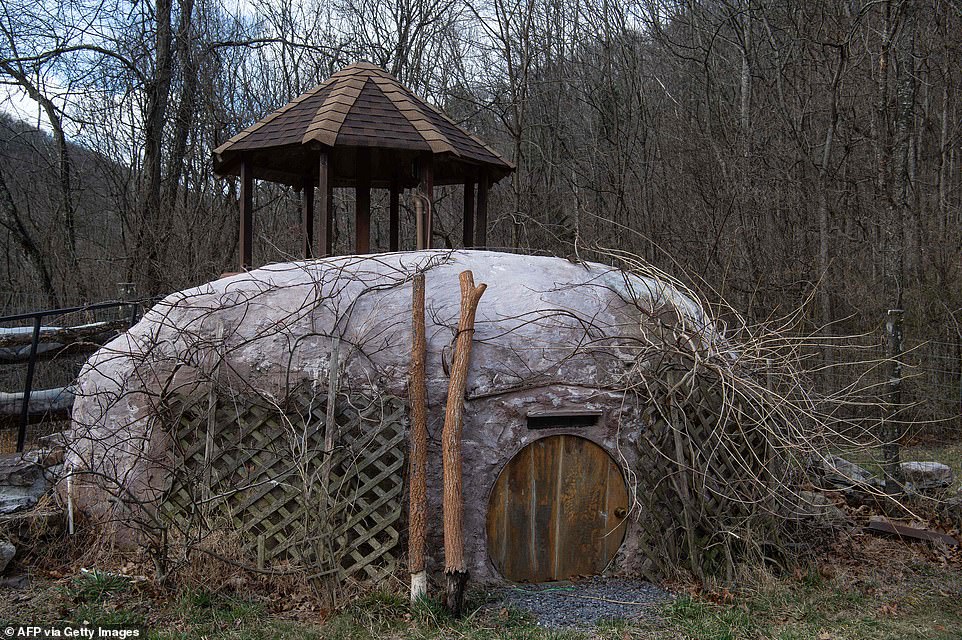 A guard post and bunker are seen at Fortitude Ranch in Mathias, West Virginia. The camps will now be opening from election day on November 3 over fears of a widespread loss of law and order no matter who wins the presidency 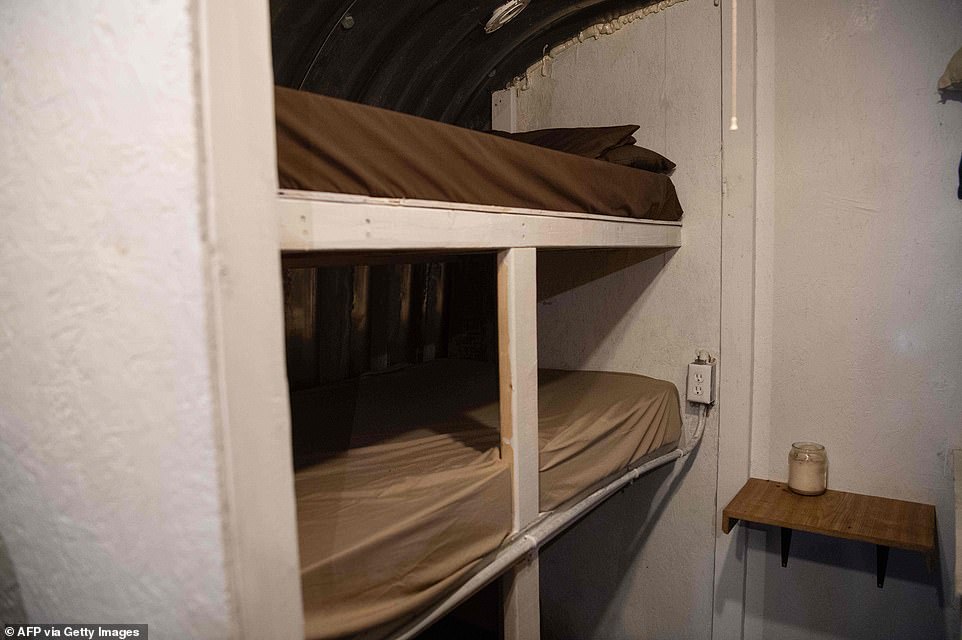 Bunk beds inside a bunker at the Fortitude Ranch in West Virginia. Members can join for as little as $1,000 a year 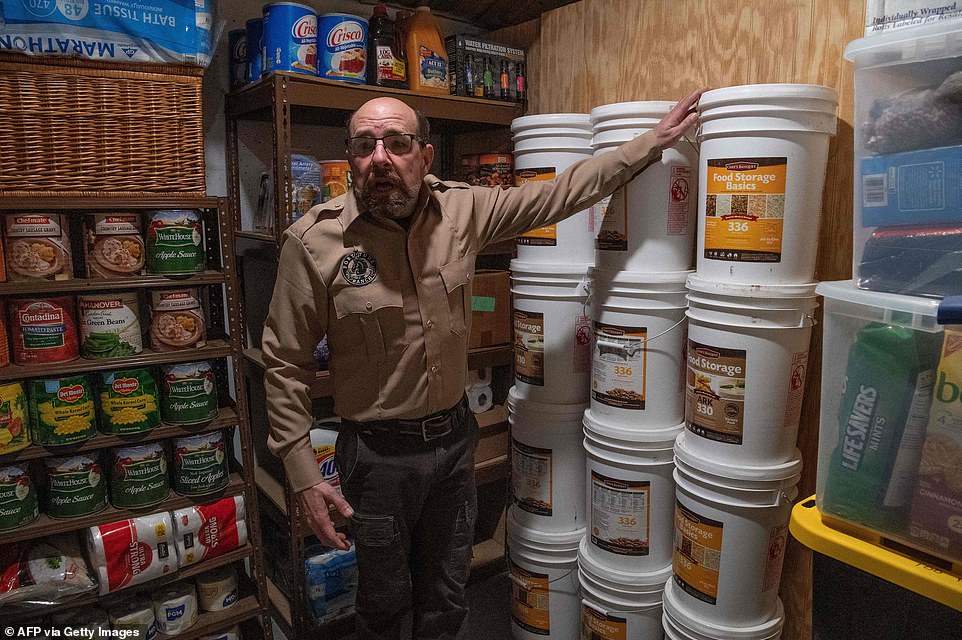 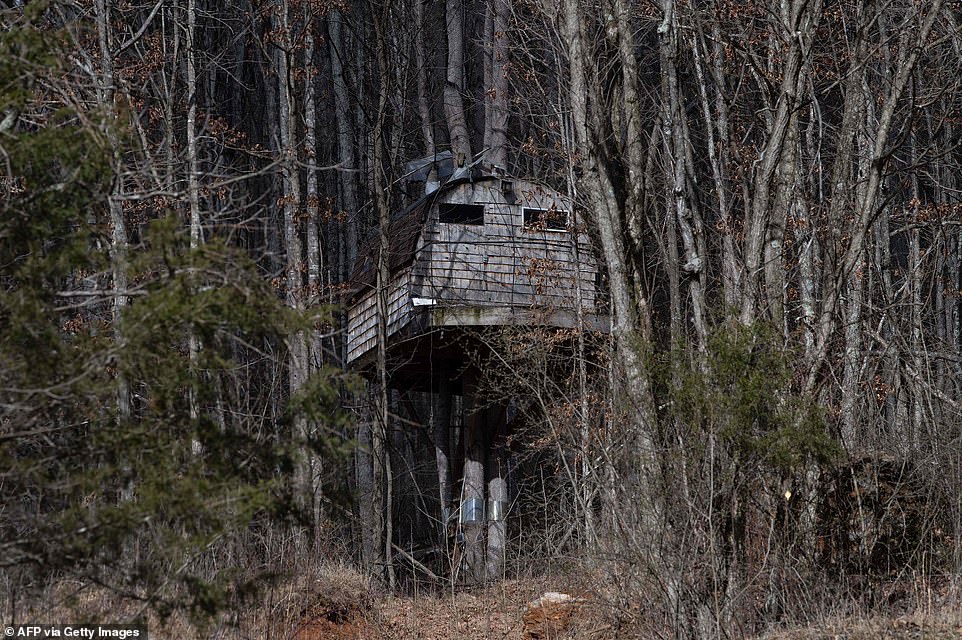 A guard post is seen at the Fortitude Ranch in Mathias, West Virginia. Members are expected to help with guard duty 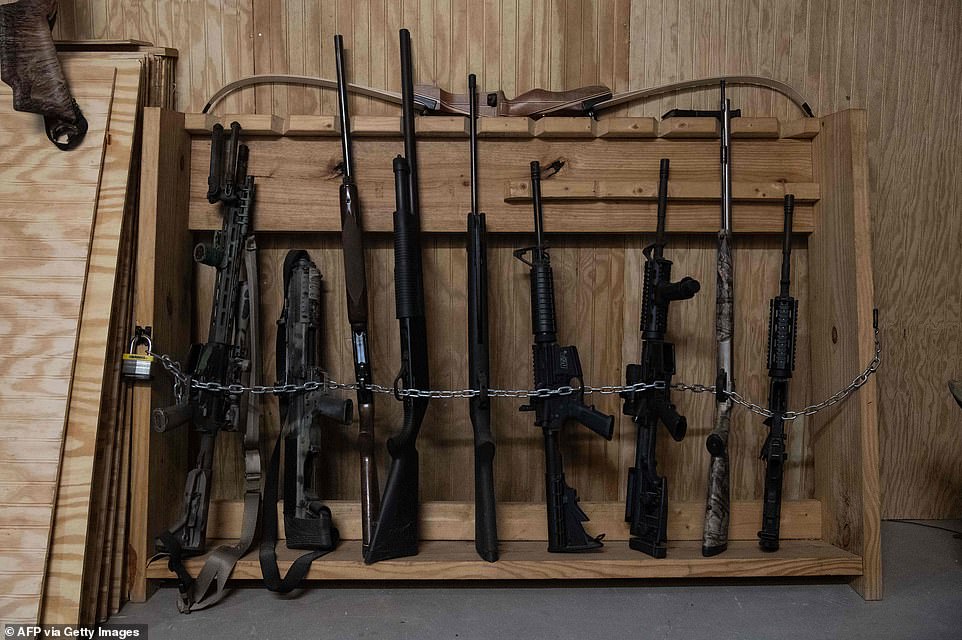 Members are required to own either a rifle or shotgun to defend the communities, pictured here

‘It’s not a bunch of crazy people with this idea that tomorrow the world ends,’ said manager and former Operation Desert Storm soldier, Steve Rene.

‘We’re not militaristic. We have no ties with militias, anything like that. If you’re not prepared in some way, you have just nowhere to go, nothing to do. Everybody scrambles and lots of things get out of hand.’

The camps are strategically placed in remote areas near water for fishing and in heavily wooded areas that provide firewood and hunting grounds (elk in West Virginia, deer and turkey in Colorado).

The communal areas are equipped with kitchens, books and board games for entertainment.

In the event of societal collapse, the front gate to Fortitude Ranch will be blocked off and only accessed by members with a password. A different set of protocols that screens members upon entry for illness are already in place during a pandemic. 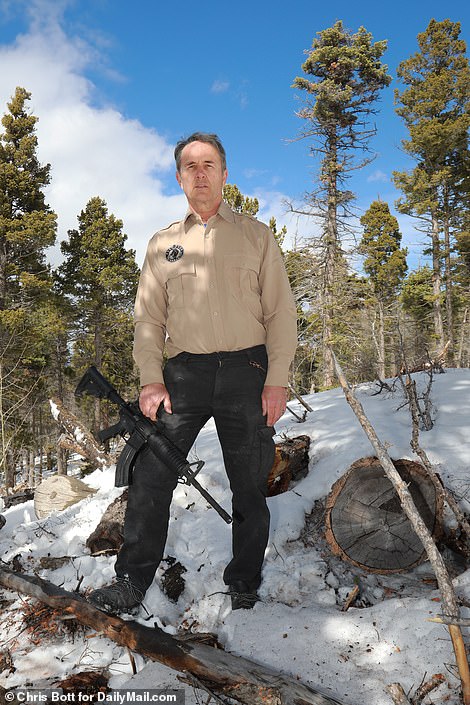 Drew Miller, a former Air Force intelligence officer with a Ph.D. from Harvard in operations research, runs the camp

Every member will be expected to contribute to the shared survival of the community whether its guard duty, collecting firewood, preparing meals or doing chores. The Fortitude Ranch staff (which comprised mostly of former military and law enforcement personnel) are in charge of making the big decisions and assigning tasks.

‘But no one can be voted off the Island,’ assured Miller, ‘It’s a business and we promise everyone that will take care of you, and we will.’

The business is designed to keep members safe ‘when society breaks down, there is widespread looting, marauding, lawlessness, and it’s not safe to be in cities or suburbs,’ he told Reuters earlier this year.

Miller has been a prepper for as long as he could remember but it was seven years ago when he realized that solo-prepping ‘just wasn’t very feasible,’ he told DailyMail.com in March. ‘For one, it’s too expensive; but more importantly – it’s just not safe.’

The economics of doomsday prepping has proven to be very costly. Costco recently began selling a $6,000 prepper kit that can feed a family of four for an entire year, though prices can soar into the many millions with companies such as Rising S who specialize in extravagant fortified homes for annihilation-conscious billionaires.

Miller saw the need for a survival community that was professionally run and not merely based on volunteers with a hope that people would band together and do the right thing during a crisis.

Fortitude Ranch is unique in that it also functions as a recreational resort year round.

All members are welcome to stay at the facility for up to ten days per year while enjoying the local outdoor activities: hunting, hiking, fishing and Frisbee golf.

‘Worst case (or best case) you join Fortitude Ranch and a disaster never happens. At least you’ve still got great place to vacation, it’s cheaper than renting a cabin in Colorado or West Virginia,’ said Miller. 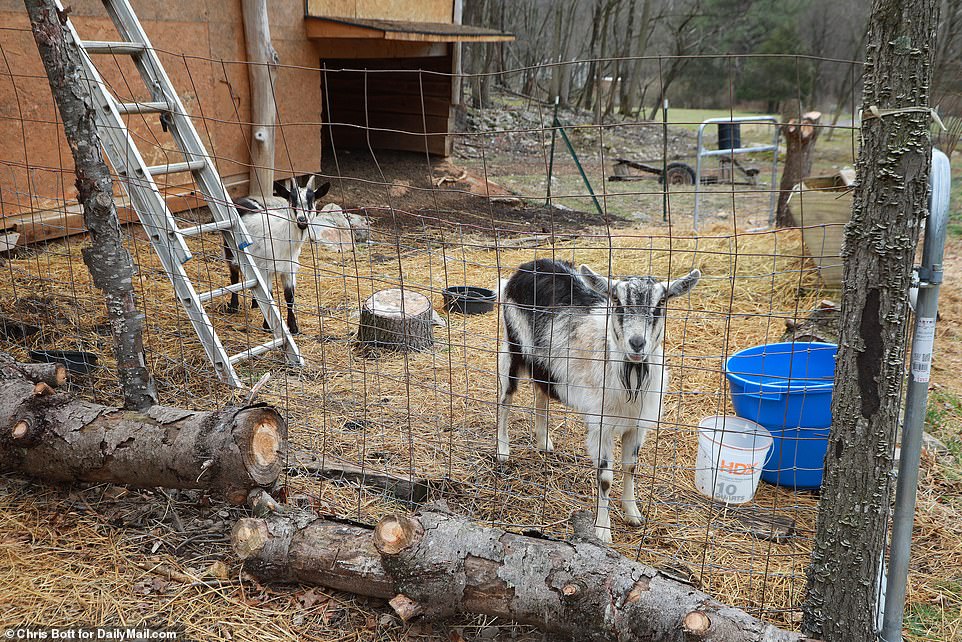 Milk goats, free range chickens and cattle are some of the important livestock that will allow the Fortitude Ranch survival community to sustain life long-term in the event of a ‘collapse’ which Miller defines as ‘a complete loss of law and order’ 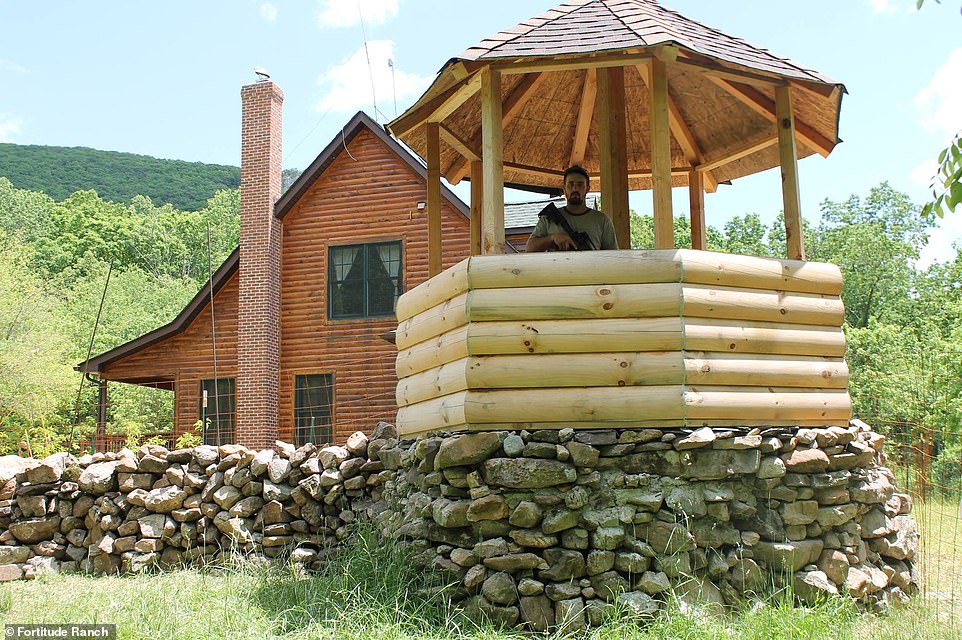 A member stands guard at one of the guard posts on the camp. For an annual fee of around $1,000, members can vacation at camps in Colorado and West Virginia in good times, and use them as a refuge in the event of a societal collapse 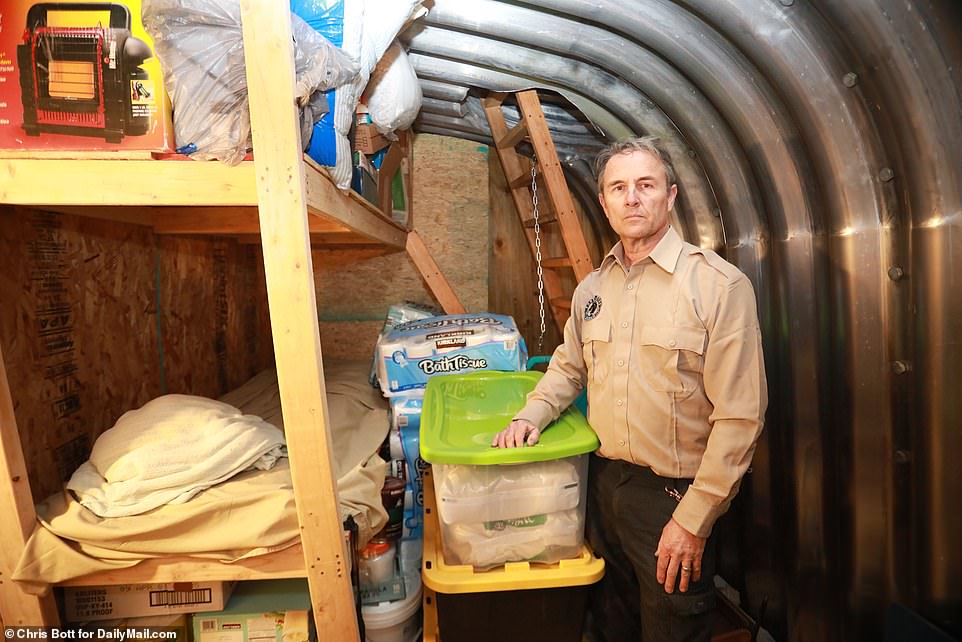 Unlike most prepper packages and bunkers which can cost into the millions, Fortitude Ranch’s ‘Spartan’ package guarantees a bed and personal storage locker in the shared bunker rooms for roughly $1,000 per year. Pictured, Drew Miller 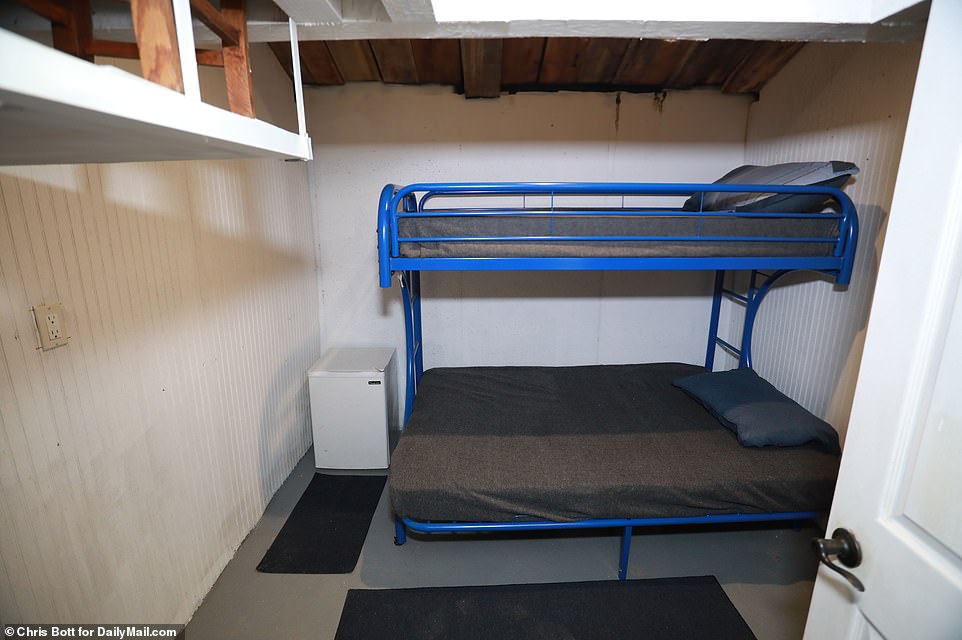 Above is considered a ‘mid-level accommodation’ at the Fortitude Ranch in the mountains of West Virginia which can house up to 500 people in its various shelters. Fortitude Ranch also provides arrangements for families, couples and allows for pets 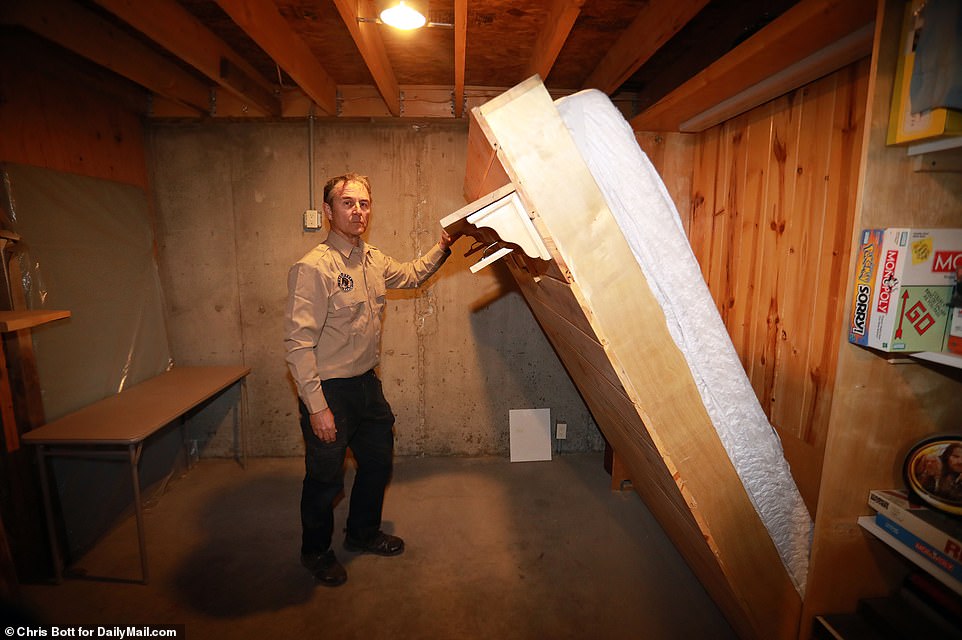 There are three different membership packages at Fortitude Ranch: Spartan, Economy, and Luxury. Drew Miller, who runs the camp with other investors, showcases an ‘Economy’ room that comes with private space and in-room storage 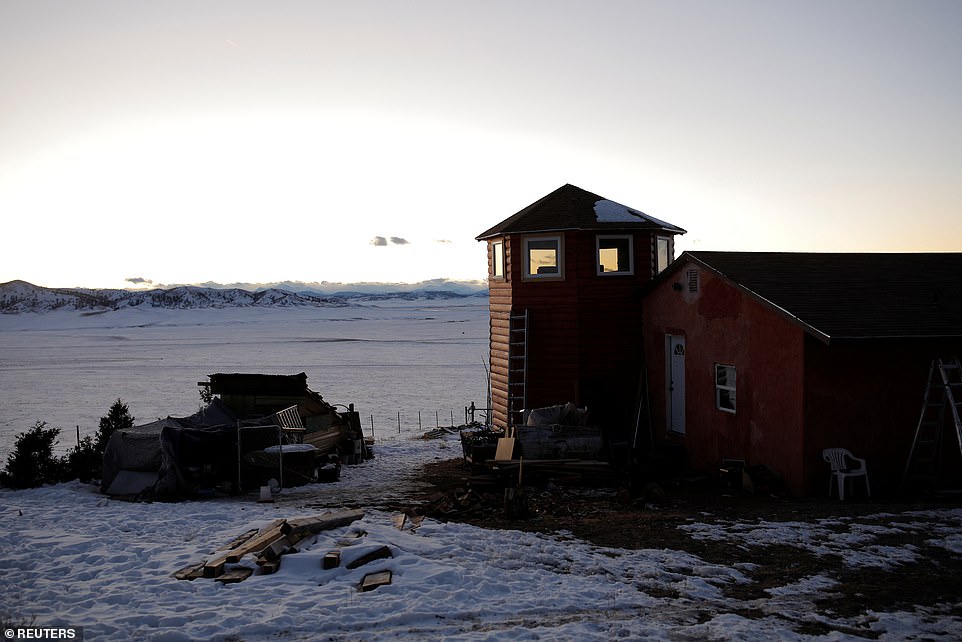 An exterior shot taken of the Fortitude Ranch survival camp in December 2019 reveals another guard tower. The location of each camp is selected for strategic reasons but they are kept completely secret and known only to members

FBI and U.S. Department of Homeland Security (DHS) memos said threats by domestic extremists to election-related targets will likely increase in the run-up to the election.

Trump and some Republican allies have said, without evidence, that a surge in mail-in voting during the coronavirus pandemic will lead to massive election fraud.

Both major political parties have marshaled an army of lawyers to litigate election disputes.

Fears of a disputed or undecided presidential contest have increased interest in the U.S. ‘prepper’ movement, supplied by a multi-billion-dollar industry selling everything from gas masks to dehydrated food to help people survive an apocalypse.

The survival camp industry had already seen a surge due to the coronavirus pandemic which increased requests to Fortitude Ranch tenfold earlier this year.

As well as the election and the pandemic, the company tracks a diverse laundry list of other lethal threats that they refer to as ‘trigger events’ – a phrase they use to define potential cataclysmic incidents that could initiate the total collapse of democracy and law and order.

Pictured, a bunker at a Fortitude Ranch. The bunkers are designed to survive a nuclear attack

A 2017 photo of the Fortitude Ranch, run by doomsday prepper Drew Miller, which has various locations across the US 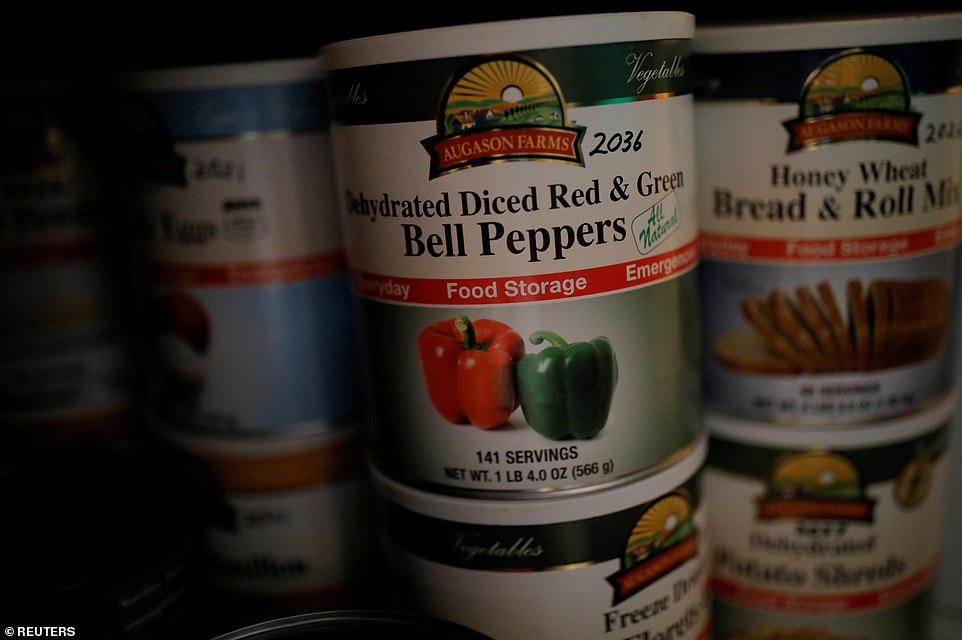 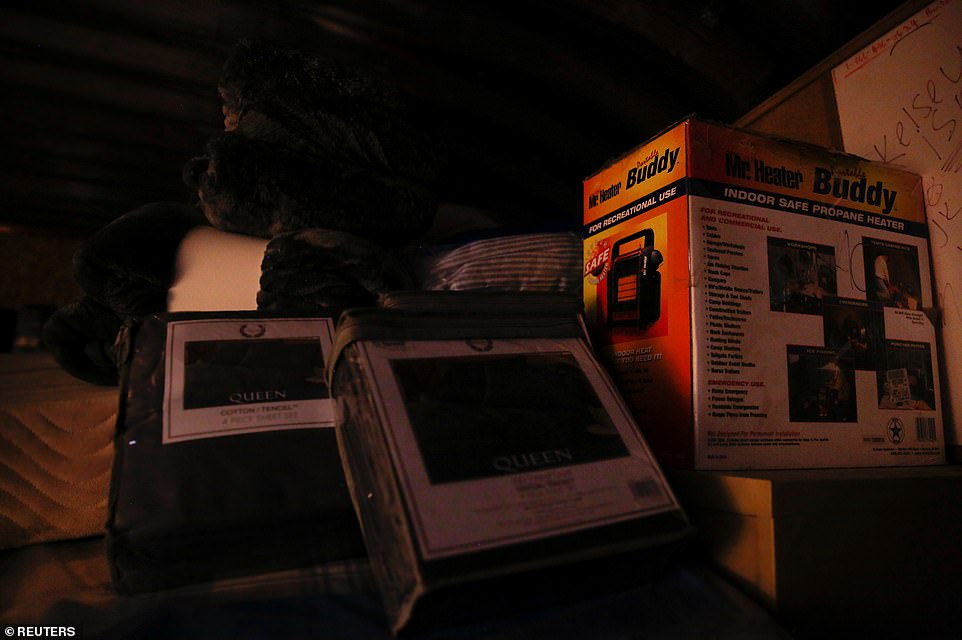 Supplies including mattresses, heaters, and blankets are stacked to the ceiling in an underground shelter 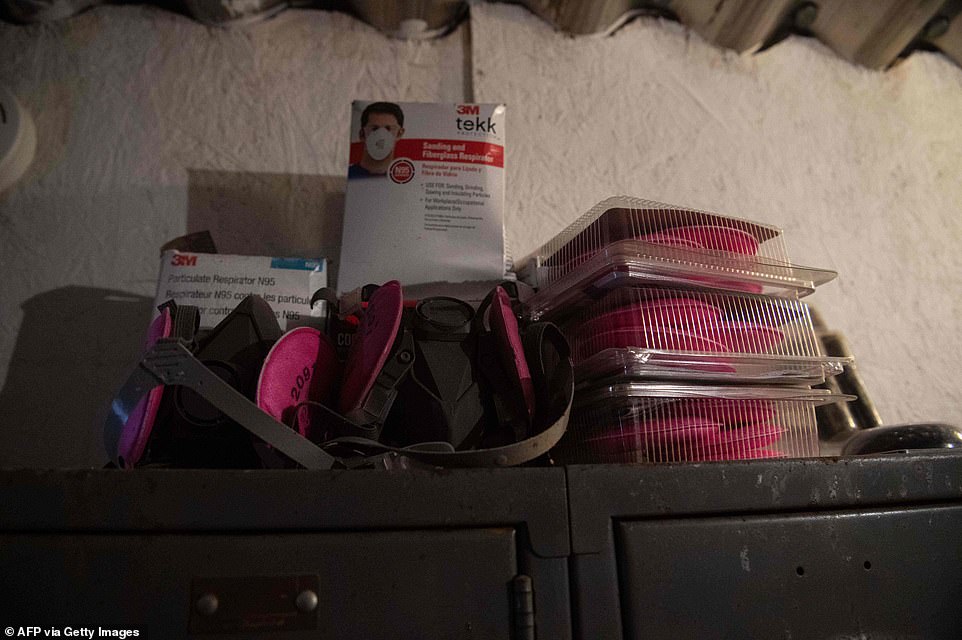 They include climate change, a major earthquake, the eruption of Yellowstone’s mega-volcano, a North Korean electromagnetic pulse attack, an earth-shattering meteor shower, the collapse of the country’s electrical grid, artificial intelligence running amok, a tsunami, and uncontrollable self-replicating nanotechnology.

While the probability of any one of these events happening remains low, Miller said that it’s also ‘not insignificant’ when you add up all 46 different triggers.

Now he and his partners invested in Fortitude Ranch are scrambling to raise capital in order to meet with the demand for expansion with preliminary plans to expand into Nevada and Wisconsin next.

Anonymity is crucial in the prepping community where the cardinal rule is: ‘don’t ever tell anyone that you’re a prepper.’ Miller explained that it’s because ‘you don’t want your neighbors coming to bug you and saying, ‘hey, give me food’ in a disaster situation. So you should always keep it secret.’

In fact, he argues that ‘preppers’ are more common than people think, ‘there are millions and millions of them in the U.S. and around the world and they are your neighbors, you just don’t know it.’

He blames television shows like National Geographic’s Doomsday Preppers for the ill-conceived notion that preppers are a cluster of conspiracy minded- hysterics with hordes of canned beans in their basement. He concedes that the popular show did film ‘the crazy ones’ but contends that it’s because the vast majority of average preppers obey the central rule of apocalypse planning.

‘So you tend not to see the average prepper on TV because they will never tell you that they are a prepper in the first place!’