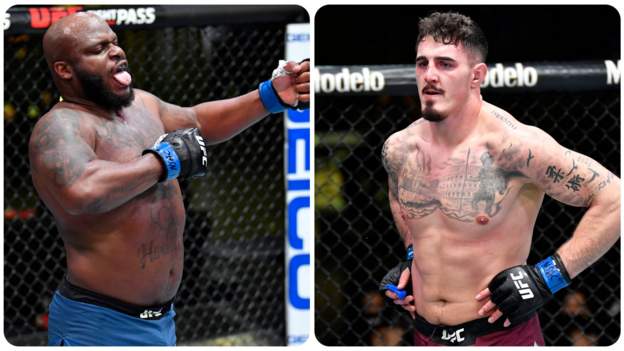 Lewis knocked out Blaydes with a stunning uppercut one minute and 26 seconds into round two.

“I didn’t expect to finish him with a submission,” said the 27-year-old.

“I’ve watched him for a long time so this means a lot to me. I’m happy with the result but not the performance. I learned a lot out there.”

Aspinall, a former sparring partner of Tyson Fury, made his intentions clear early on, immediately taking the centre of the cage and daring Arlovski to engage in a striking match.

The 42-year-old took the bait but was caught with a heavy strike which allowed Aspinall to unleash a flurry of quick-fire punches.

However, the veteran withstood the early barrage and managed to catch his younger opponent with a few clean shots as the first round drew to a close.

As Arlovski tried to resume the striking match, Aspinall forced his opponent up against the cage with a double leg takedown.

Arlovski attempted to escape, but in doing so gave Aspinall a window to take his back which he did just over a minute into the second round.

In the main event, Lewis came in with the most knockouts in UFC heavyweight history and added another for his fourth straight win.

Although he connected on just seven total strikes – compared to 28 for Blaydes – he made the last one count with Blaydes left unconscious as he hit the mat.

“That was the only punch I was waiting for the entire fight,” Lewis said.

“I knew he was gonna come in. I wasn’t worried about throwing a one-two, a jab or anything.”

SARAH VINE: How laughable for them to lecture the Queen on duty. She wrote the book