Black Lives Matter activist Sasha Johnson is in a critical condition after sustaining a gunshot wound to her head after she received ‘numerous death threats as a result of her activism’, Taking the Initiative Party (TTIP) has said.

In a statement published on Instagram, TTIP said: ‘It is with great sadness that we inform you that our own Sasha Johnson has been brutally attacked and sustained a gunshot wound to her head.

‘She is currently in intensive care and in a critical condition. The attack happened in the early hours of this morning, following numerous death threats as a result of her activism. 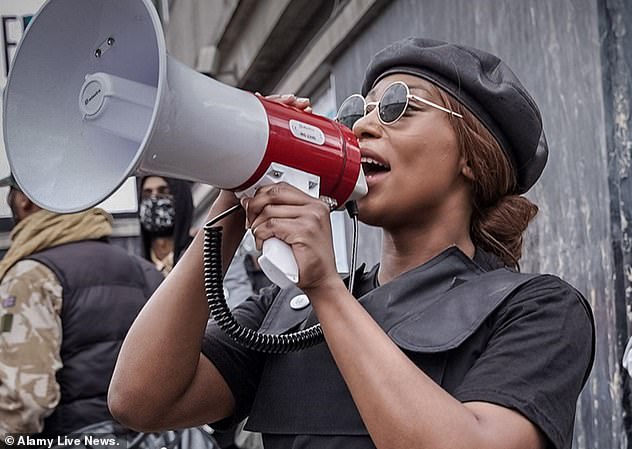 Black Lives Matter activist Sasha Johnson is in a critical condition after sustaining a gunshot wound to her head, Taking the Initiative Party (TTIP) has said 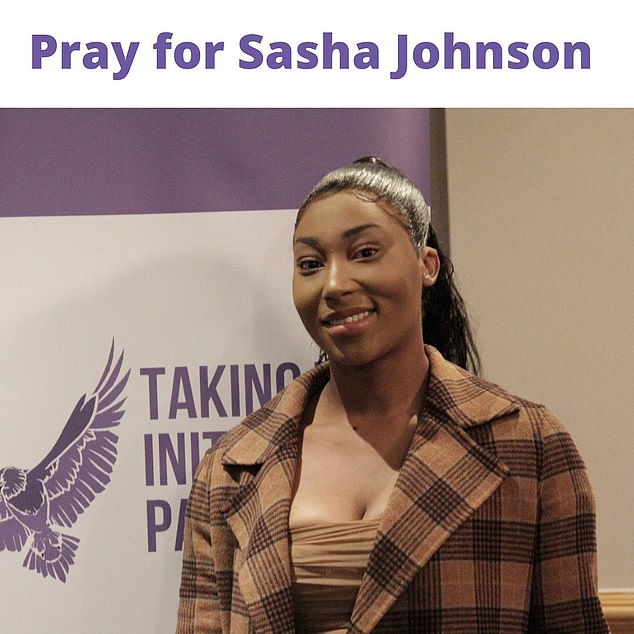 In a statement on Instagram, TTIP said: ‘It is with great sadness that we inform you that our own Sasha Johnson has been brutally attacked and sustained a gunshot wound to her head’ 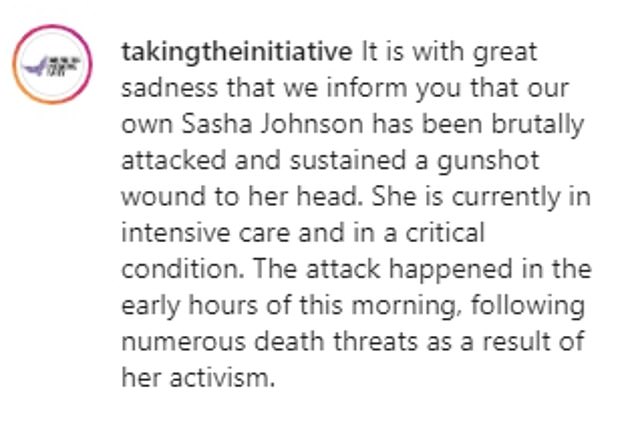 ‘Sasha has always been actively fighting for black people and the injustices that surround the black community, as well as being both a member of BLM and a member of Taking the Initiative Party’s Executive Leadership Committee.

‘Sasha is also a mother of 2 and a strong, powerful voice for our people and our community.

‘Let’s all come together and pray for Sasha, pray for her recovery and show our support to her family and loved ones. #prayforsashajohnson’.

MailOnline has approached the Metropolitan Police for further information.

Ms Johnson, the self-styled ‘Black Panther of Oxford’, came to prominence as an organiser of the BLM protests last summer, where she was seen addressing crowds while wearing camouflage trousers, a black beret and a stab-proof-style vest.

She has called for a ‘race offenders’ register’ that would see people barred from jobs based on having been accused of ‘micro-aggressions’ in the workplace, saying the list would be ‘similar’ to the sex offenders’ register – which is used to bar paedophiles from professions like teaching.

The Oxford Brookes graduate is also a UK representative of the Black Panthers Party –  modelled on a far-Left sub-set of protesters who campaigned against police brutality in 1960s America.

She has campaigned for statues to be removed and is part of the secretive group Forever Family Force.  Footage on Instagram shows her parading with female FFF members in military-style garb during a march in Brixton last year for African Emancipation Day.

Ms Johnson, a youth worker and cafe owner, has called for the establishment of a ‘black militia’ in the UK. In a video posted in July, she compared the police to the Ku Klux Klan and dismissed ethnic minority politicians David Lammy, Priti Patel and Sadiq Khan as ‘tokenistic’.

The mother of two also recently led chants of ‘f*** the police’ and ‘one solution, revolution’ in a fresh campaign to remove the statue of Cecil Rhodes from Oxford University.

Speaking exclusively to MailOnline, she also called for ‘Holocaust-style’ reparations for black people on the basis that capitalism racially discriminates against them, and called for the ‘defunding’ of Britain’s police forces.

She also attacked ethnic minority politicians such as Labour MPs David Lammy and Diane Abbott, saying ‘as black people… they have been tokenistic’.

Ms Johnson, who is a TTIP executive committee member in charge of activism, said TTIP was ‘not just a party for black people’ and would also represent the working class.

The party operates a system of ‘coalition leadership’ so there is no one specific person in charge and different spokesmen sometimes air views that contradict the official party line.

Outlining the party’s manifesto in her first interview with a national publication, she called for a national register of alleged racists that would ban them from living near people from ethnic minorities.

This would include people guilty of ‘micro-aggressions’, which the Oxford Dictionary defines as ‘indirect, subtle, or unintentional discrimination against members of a marginalised group’.

‘It’s similar to the sex offenders register,’ she told MailOnline. ‘If you were to be racially abusive to someone, [the register] would question whether someone is fit enough to hold a particular job where their bias could influence another person’s life.

‘A lot of racism happens at work and places of education in a micro-aggressive way. If you exhibit an element of bias at work, you should probably receive a warning first [before later being added to the register] so people know in future that you hold these views.’

Ms Johnson said inclusion on the list would mean you could be excluded from ‘certain fields’ of employment – or even banned from living near people from ethnic minorities.

‘If you live in a majority-coloured neighbourhood you shouldn’t reside there because you’re a risk to those people – just like if a sex offender lived next to a school he would be a risk to those children,’ she said.

TTIP was formed in summer in the wake of the Black Lives Matter protests. The organisation previously called itself the first ‘black-led’ political party in the UK, although Ms Johnson now insists it is merely ‘black founded’.

Ms Johnson also believes that black people should be given reparations by the British Government due to the legacy of slavery and because capitalism ‘holds us down’. She said current constraints on the national budget meant black people should not receive direct payments, but tax breaks instead.

In the past, her Twitter account have been suspended for tweets which discussed enslaving white people. She now claims these tweets were ‘fake’ and an ‘attack from the Far Right’.

BLM has distanced themselves from groups such as TTIP and insists it is not setting up a political party in the UK.

This is a breaking news story. More to follow.

Inflation, employment, profits and investments: A year after recovery began, here's how the economy is graded

Amazing new scenes from Mars .. This is what NASA spacecraft spotted on the red planet

Eugenio Suárez hit an early two-run homer and the surging Cincinnati Reds climbed back over .500...