Today’s figures are a 2.5 per cent rise on the Government’s positive tally from last Wednesday, when officials added another 16,170 cases to the total.

Deaths from the virus fell by 17.7 per cent compared to last week, after 533 victims were posted on the dashboard compared to 648 seven days ago.

Department of Health figures showed cases plummeted during the first two weeks of England’s second shutdown. But the curve began to flatten a week before the draconian measures were lifted, suggesting Britons may have grown tired of the restrictions on their daily lives.

The British medicines regulator, the Medicines and Healthcare products Regulatory Agency (MHRA), has told anyone with a history of allergies not to get the vaccine while it investigates the cases.

The number of people set to be barred is not known, but up to 7million Britons suffer from allergies that are so severe they require medical attention, according to the NHS.

The two staff members, who have not been named, are said to be recovering well. They suffered an anaphylactoid reaction to the vaccine, which is milder than anaphylaxis, and tends to involve a rash, shortness of breath, swelling of the face and tongue or a drop in blood pressure, the NHS says.

Professor Chris Whitty, Britain’s chief medical officer, warned today that despite the vaccine roll out lockdowns would still be needed until March because it will take time to give the vaccine to enough people.

The jab is being rolled out at 50 hospital sites to the elderly, care home residents and NHS workers first – who are most vulnerable to the virus – before it is offered to the rest of the population.

But scientists say at least 60 per cent of Britons will need to get the jab – or 40million people – before the Government can start to relax restrictions without triggering a sudden surge in infections. 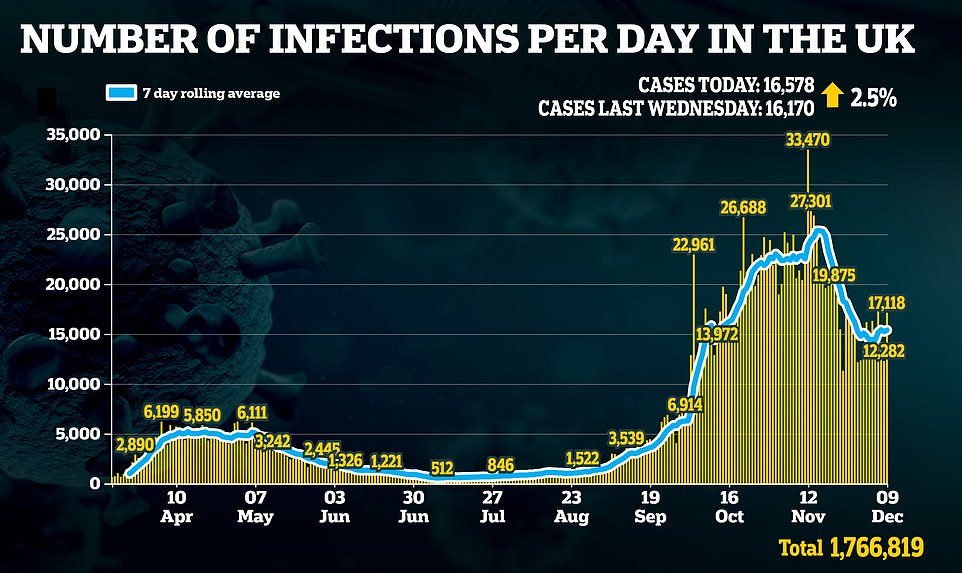 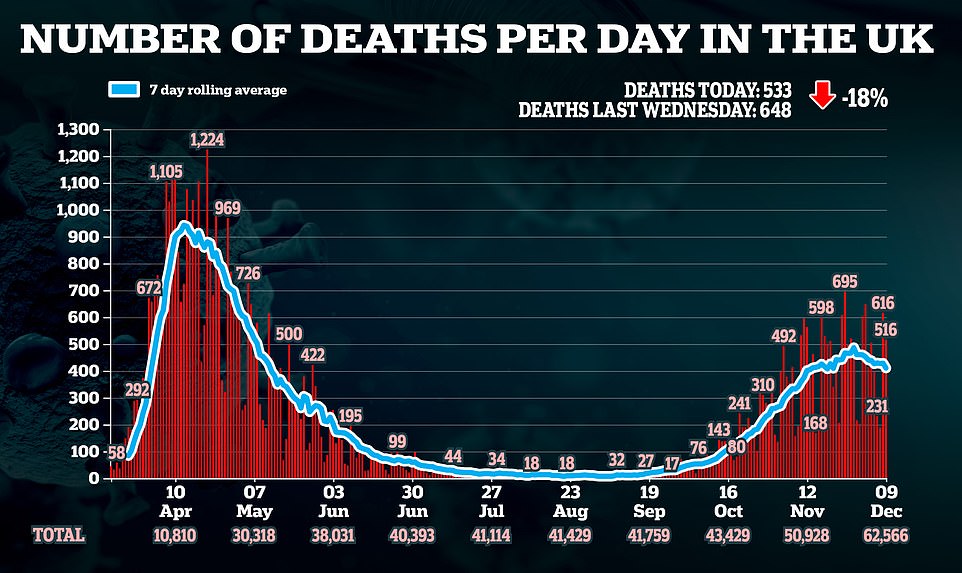 WHAT ARE THE KNOWN SIDE EFFECTS FROM THE PFIZER VACCINE?

The UK medicines regulator advised today that anyone who has a history of ‘significant’ allergic reactions to medicines, food or vaccines should not get the Pfizer coronavirus jab.

Dr June Raine, the chief executive of the MHRA, told Parliament’s Science and Technology Committee that this was not identified in the trials.

‘We know from very extensive clinical trials that this wasn’t a feature,’ she said.

Allergic reactions to the vaccine are ‘very rare’, according to the trials involving more than 40,000 people.

Pfizer found a ‘very small number’ during its phase three clinical studies, or 137 out of 19,000 people who got the vaccine.

They also identified 12 possible side-effects from the vaccine, with seven identified as ‘very common’ meaning they are likely to affect more than one in ten people. Below are the known side effects.

The patient safety leaflet for the vaccine cautions that anyone with an allergy to any of the active substances in the vaccine should not receive the jab.

It adds: ‘Signs of an allergic reaction may include itchy skin rash, shortness of breath and swelling of the face or tongue.’

Allergic reactions to the vaccine are:

Very common (Likely to affect more than one in ten people)

Common (Likely to affect up to one in ten people)

Uncommon (May affect one in 100 people)

The number of daily Covid-19 infections reported has plateaued after reaching a low of 14,400 a day on average on December 5, three days after England’s lockdown ended.

Professor Stephen Powis, national medical director for the NHS in England, announced today that those with a history of allergic reactions should not get Pfizer’s Covid-19 vaccine.

Despite the two allergy cases the Government is today continuing to vaccinate between 5,000 and 7,000 people per day across the UK with 800,000 Pfizer doses already in hospitals and millions more on the way.

In the US vaccine trial carried out by Pfizer, 137 out of around 19,000 people given the vaccine had one or more of these reactions. But 111 who got the placebo also had allergic reactions.

Reactions to the jab can include a temperature, nausea, swelling of the arm or in severe cases feeling generally unwell with swollen lymph node glands.

A Pfizer spokesman said: ‘We have been advised by MHRA of two yellow card reports that may be associated with allergic reaction due to administration of the COVID-19 BNT162b2 vaccine.

‘As a precautionary measure, the MHRA has issued temporary guidance to the NHS while it conducts an investigation in order to fully understand each case and its causes. Pfizer and BioNTech are supporting the MHRA in the investigation.

‘In the pivotal phase 3 clinical trial, this vaccine was generally well tolerated with no serious safety concerns reported by the independent Data Monitoring Committee. The trial has enrolled over 44,000 participants to date, over 42,000 of whom have received a second vaccination’.

Dr June Raine, the chief executive of the MHRA, told the Science Committee today there had been two allergic reactions to the Pfizer vaccine yesterday.

She said: ‘I may share with the committees that even last evening we were looking at two case reports of allergic reactions.

‘We know from the very extensive clinical trials that this wasn’t a feature, but if we need to strengthen our advice now that we’ve had this experience in the vulnerable populations – the groups who’ve been selected as a priority – we get that advice to the field immediately.’

Dr Raine said careful plans had been made for ‘real-time vigilance’ when monitoring side effects from vaccinations and that any updates to advice for patients would be communicated ‘immediately’.

She told the Committee regulators had been aware since last night of the two people who had experienced the reactions. 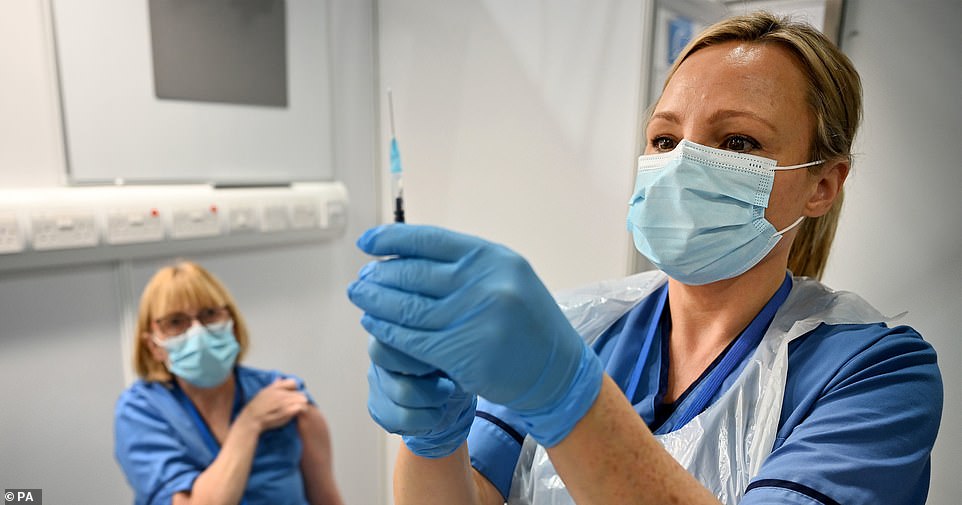 Both are recovering following the first day of the mass vaccination programme, it is understood (pictured, the vaccine being administered in Glasgow yesterday)

She said: ‘The role is before, during and after, and there is a true end-to-end looking from the scientific laboratory bench through to the patient who yesterday first received the vaccine.

‘As an illustration to this, I may share with the committee that even last evening we were looking at two case reports of allergic reaction.

‘We know from the very extensive clinical trials that this wasn’t a feature but if we need to strengthen our advice now that we have had this experience in the vulnerable populations… we will get that advice to the field immediately.’

The MHRA advice states: ‘Any person with a history of a significant allergic reaction to a vaccine, medicine or food (such as previous history of anaphylactoid reaction or those who have been advised to carry an adrenaline autoinjector) should not receive the Pfizer/BioNtech vaccine.

The yellow card scheme is the UK system for collecting and monitoring information on suspected safety concerns or incidents involving medicines and medical devices.

Commenting on the development, Peter Openshaw, past-president of the British Society for Immunology and professor of experimental medicine at Imperial College London, said: ‘As with all food and medications, there is a very small chance of an allergic reaction to any vaccine.

‘However, it is important that we put this risk in perspective. The occurrence of any allergic reaction was one of the factors monitored in the phase three clinical trial of this Pfizer/BioNTech Covid-19 vaccine, the detailed data from which was released yesterday.

‘In this, they reported a very small number of allergic reactions in both the vaccine and placebo groups (0.63% and 0.51%).

‘Similar to the rollout of all new vaccines and medications, this new Covid-19 vaccine is being monitored closely by the MHRA.

‘They will now investigate these cases in more detail to understand if the allergic reactions were linked to the vaccine or were incidental.

‘The fact that we know so soon about these two allergic reactions and that the regulator has acted on this to issue precautionary advice shows that this monitoring system is working well.’

Professor Ian Jones, a virologist at the University of Reading, told MailOnline he was ‘surprised’ by the warning and said he would be cautious about attributing this to an allergic reaction.

‘I think it’s probably safer in my view than many other vaccines currently available,’ he told MailOnline. ‘It really is very clean technology.’

‘I would be cautious about attributing the allergic reactions to the vaccine at this moment, especially as it hasn’t cropped up in clinical trials,’ he said.

‘The big allergic reaction to vaccines normally is an egg allergy, because historically influenza vaccines and several others have been grown in hens eggs and you inevitably get a bit of egg protein coming through with the final product.

‘But there’s nothing like that in the mRNA vaccine. The only addition is the lipid coating that they put on the mRNA before it goes into cells – but there’s no history of allergic reactions to that.’

At least 25 people are killed during gun battle between police and a drug gang in...

Does Denmark want to send its refugees to Rwanda?