Another Covid variant that could dodge vaccine-triggered immunity has been identified in the UK, scientists say.

The strain — called B.1.525 — has been spotted 33 times already but experts say this could be an underestimate. MailOnline understands health chiefs will today officially list it as a variant under investigation while further tests are carried out. It will not be instantly listed as a strain of concern, like the South African and Kent viruses.

It carries the E484K mutation found on both the South African and Brazilian variants, which make the current crop of jabs slightly less effective.

The variant also has the Q677H mutation on its crucial spike protein, prompting warnings from scientists that this could make it even more resistant to vaccines. And it shares similarities with the Kent strain, which studies show is up to 70 per cent more infectious and deadlier.

The B.1.525 variant was first detected in Britain in mid-December — but this doesn’t mean it evolved here. The UK does far more sequencing than other countries. It has already spread to 11 countries including the US, Canada and Denmark, which are not on the UK’s ‘red list’.

The discovery will likely spark fears Britain’s lockdown restrictions may be delayed. Boris Johnson — who is set to unveil his ‘roadmap’ back to freedom on Monday — last week refused to rule out extending measures if the South African virus kept on spreading. His comments came after an alarming study claimed Oxford University’s vaccine may not stop people falling ill with the mutant strain.

One senior Tory MP told MailOnline that the discovery of such variants could give Downing Street cold feet about easing lockdown. They said: ‘It looks as if these variant are actually tackled by the existing vaccines but the fact is you don’t know until time passes and you can see the impact on real people. The problem is that every time a variant pops up it causes this problem with people saying “hang on”.’

But although some genetic changes have been found to make jabs slightly less effective, experts say everyone should still get vaccinated because the jabs should prevent serious illness and death from the disease — even if they don’t stop people developing symptoms.

Britain has identified several Covid variants since the pandemic began, including the more infectious Kent lineage — B.1.1.7 — which is the dominant strain. The South African variant — B.1.351 — has also been found, sparking mass testing in dozens of areas to prevent larger outbreaks. Other troublesome strains have also been spotted in Bristol and Liverpool. 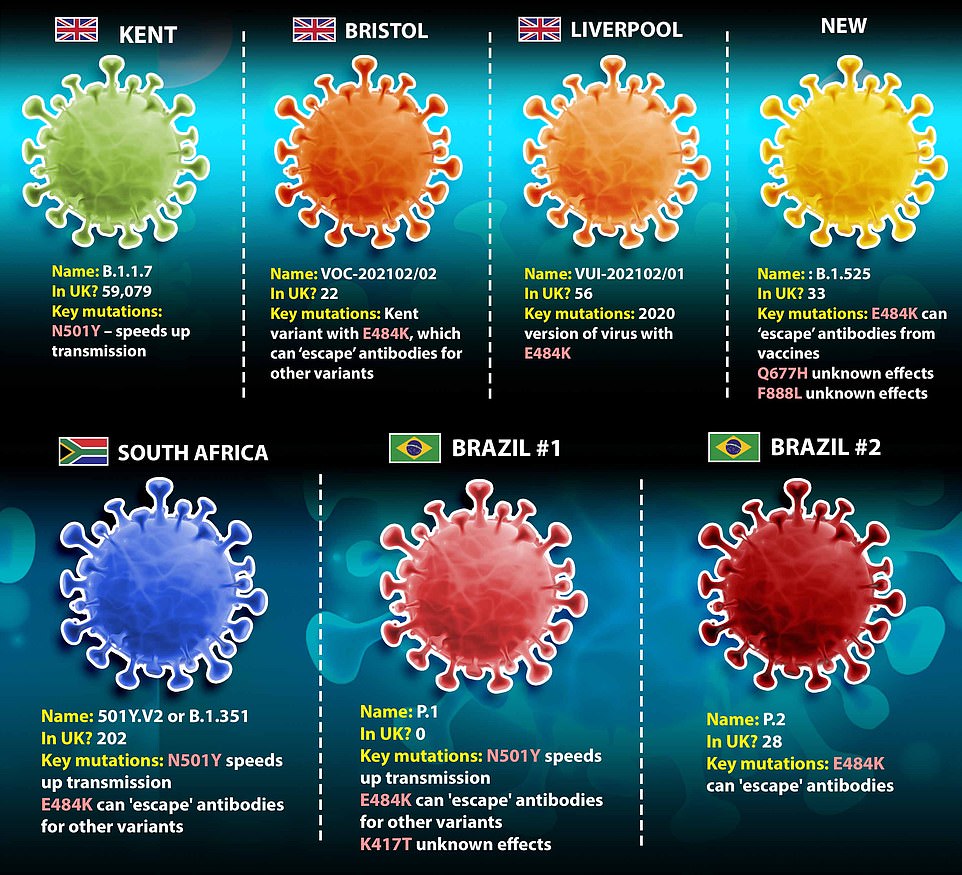 The above map shows where the strain B.1.525 has been detected in the world. It was first identified in the UK and Nigeria in late December 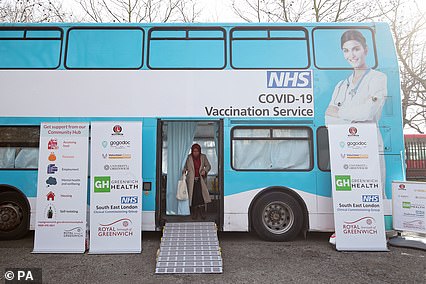 Vaccines are being administered on a double decker bus to target areas with a lower uptake of jabs.

The specially adapted vehicle has the specific aim of inoculating communities known to have greater hesitancy towards the being vaccinated.

Patients are taken on board one at a time and jabbed in one of two clinical booths which are deep cleaned after every vaccination.

Asha, who was one of the first people to receive her first dose on the bus, was keen to encourage others to follow suit.

She said: ‘I want everybody to get the jab, especially people who are Black or Asian.’

The bus first stopped at the University of Greenwich on Saturday before moving onto Thamesmead on Sunday.

It will continue to patrol south east London over the next few months to reach priority groups.

Volunteers carry out targeted outreach work within local communities to encourage those eligible to book an appointment before the bus arrives.

Local GP and Co-Chair of Greenwich Health Ltd Dr Niraj Patel said: ‘Going forward we hopefully can take the vaccination bus to pockets of areas in Greenwich where maybe the uptake is not as high as we would hope it would be.’

Greenwich Council deputy leader Cllr Denise Scott-McDonald added: ‘The bus will enable us to reach areas of the borough where take-up of the vaccine has been lower.

‘It will also make it easier for residents to get their vaccine, especially in this first phase when we’re asking people aged 70 upwards, and other vulnerable groups, to have their vaccination.’

SARS-CoV-2 — the strain of coronavirus that causes Covid — constantly evolves, which could spark the need for booster shots this Autumn in the vulnerable or the need for winter vaccine campaigns like those for influenza.

Variants of the virus contain dozens of mutations, but not all of these spark concern among scientists.

Nonetheless, a handful of troublesome ones have prompted officials to carry out door-to-door testing in some parts of the UK.

Studies have shown vaccine-triggered antibodies may be less able to destroy some variants, sparking fears that the rollout will be unsuccessful.

But not all immunity is based off antibodies, scientists say, meaning it is unlikely any of the variants will render the current crop of jabs useless.

The new variant was revealed in a report by scientists at the University of Edinburgh, who said it also had the mutation F888L. Experts say they are not sure whether this gives it an advantage.

Denmark has spotted the most cases of the strain (35), followed by the UK and then the US (10). The strain has also been detected in Jordan, France, Belgium, Ghana and Spain. None of these countries are on the ‘red list’.

Scientists have appealed for calm over the new variant, saying there is no evidence it is more infectious or more deadly at present.

Professor Jonathan Stoye, a virologist at the Francis Crick Institute, warned it was not surprising that the new variant contained some mutations already seen.

‘The minute you start putting selection pressure on this virus, you start selecting particularly for things that give it the ability to escape immune responses, and I think that is what we are seeing here,’ he told The Guardian.

‘This [E484K] change seems to be the key change at the moment to allow escape, so that’s the one you put into the tweaked vaccine.’

When asked by MailOnline about the other mutations, he warned the Q677H change may impact the effectiveness of vaccines by changing the shape of the spike protein — which the immune system recognises as a threat and tries to snuff out. Any changes in shape could allow the virus to evade detection.

Dr Simon Clarke, a cellular microbiologist at the University of Reading, told MailOnline that it was not yet clear what impact the new mutations besides E484K would have.

But he warned it was ‘entirely possible’ a new mutation would soon emerge that would affect T-cell immunity — although there is no evidence that the new variant impacts this response.

Part of the T-cell immune response is to destroy infected cells in order to stop the virus from reproducing and spreading, thereby curbing an infection.

Above is the number of cases identified by country. In areas where more genomes are checked for variants of the virus, it is likely more cases will be detected

Above is the number of times cases have been found since the first variant was reported by country. It has been most common in Nigeria, Jordan and Ghana this shows 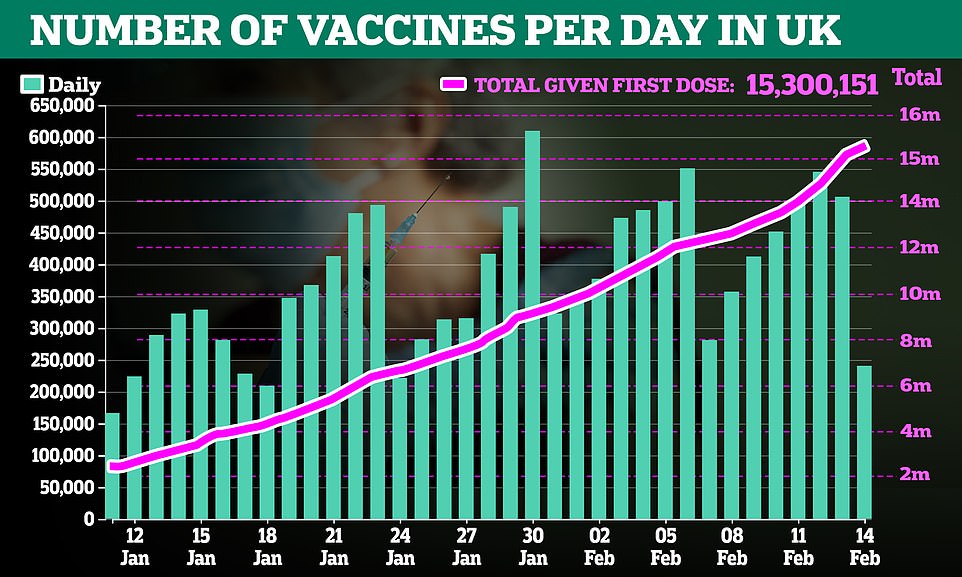 Officials have vaccinated the vast majority of the top four priority groups — everyone over the age of 70, NHS staff, care home residents and workers, and extremely ill adults 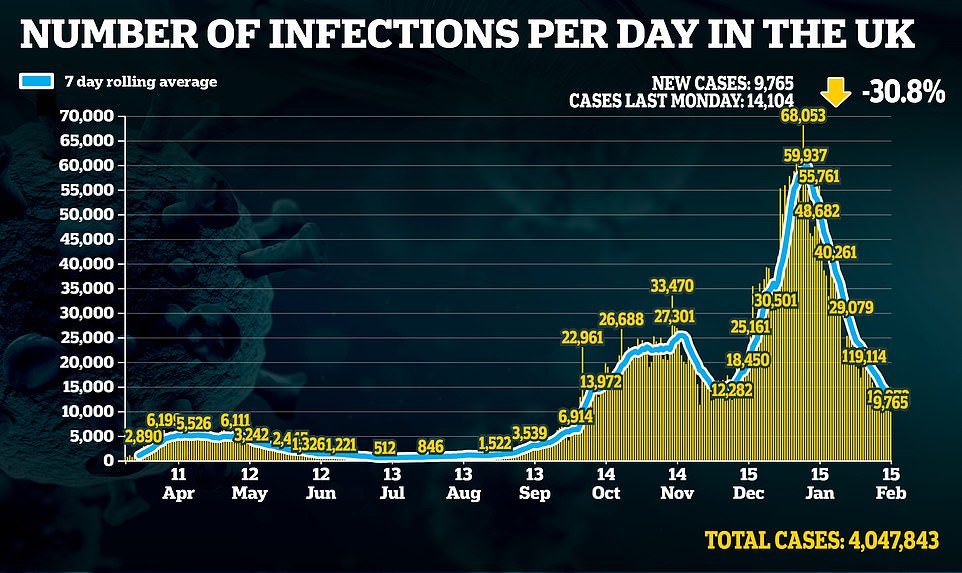 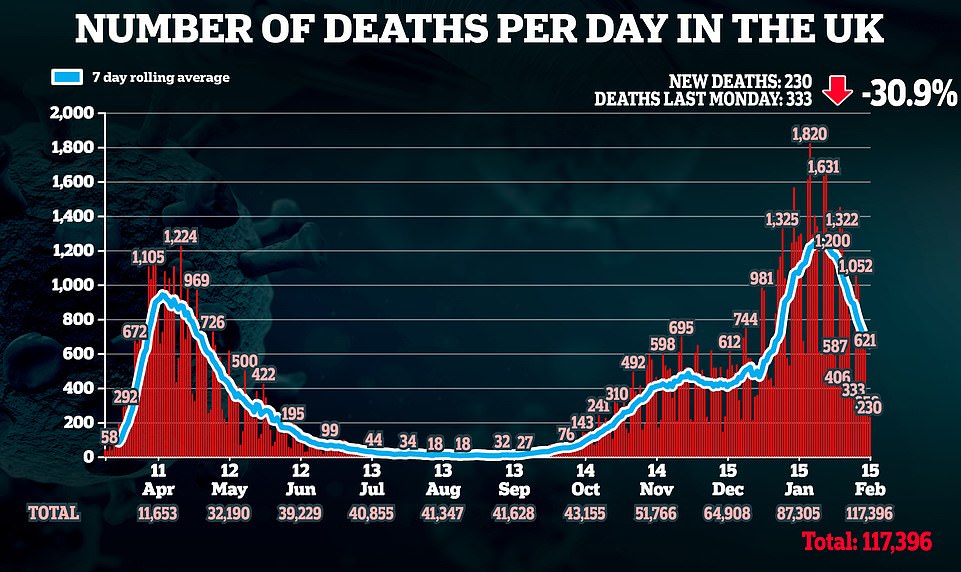 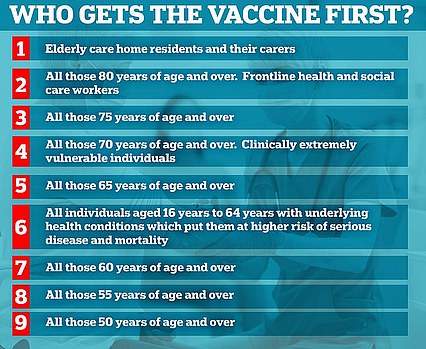 Ministers will be urged to vaccinate people by age and ethnicity rather than their job during the next phase of the coronavirus jab roll-out, it was claimed today.

Number 10’s leading jab experts, who are due to meet this afternoon to finalise their recommendation, are expected to advise that the UK continues with its age-based approach after the nine most vulnerable groups are inoculated.

When the virus enters the cells it leaves proteins on its surface which, when detected by T-cells, lead to them identifying an infection and destroying it.

But a mutation triggering a change in the shape of these proteins, would mean the T-cells would find it harder to identify and destroy infected cells – impacting immunity.

‘There is currently no evidence that this set of mutations causes more severe illness or increased transmissibility.

‘The best way to stop the spread of the virus is to follow the public health advice – wash your hands, wear a face covering and keep your distance from others. While in lockdown, it is important that people stay at home where possible.’

It comes after it was claimed today that ministers will be urged to vaccinate people by age and ethnicity rather than their job during the next phase of the coronavirus jab roll-out.

No10’s leading jab experts, who will meet this afternoon to finalise their recommendation, are expected to advise that the UK continues with its age-based approach after the nine most vulnerable groups are inoculated.

Officials have until now been focusing on vaccinating the top four vulnerable groups — everyone over the age of 70, NHS staff, care home residents and workers, and extremely ill adults.

Yesterday NHS England officially moved onto the second stage of the vaccine drive, inviting over-65s and ‘clinically vulnerable’ younger people. The programme will aim to give everyone over the age of 50 their first dose by the end of April.

NHS England boss Sir Simon Stevens yesterday vowed to double the number of jabs being given in order for the Government to hit that target. It could see up to 1million doses dished out each day.

The Labour party and workers’ unions have been campaigning for weeks for the Government to prioritise people based on their jobs once the top groups have been jabbed.

London mayor Sadiq Khan told the Radio 4 Today Programme this morning: ‘The next phase should include those occupations where…you’re more likely to catch the virus with adverse consequences’.

Ministers have not yet laid out how the jabs will be prioritised once the top nine groups have been jabbed, which includes roughly 32million people.

They are expected to receive recommendations from the JCVI by the end of this week.

Elon Musk hosts SNL and Dogecoin drops 20%: Here’s how to buy the dip in DOGE

The best flower deals to shop for Valentine's Day 2021