By Mark Duell and Jack Wright For Mailonline

Britain will be battered by three days of severe weather with Storm Alex, the first named storm of the season, set to sweep in from tonight.

The storm could bring four inches of rain, 65mph gales and 24ft waves as crisp autumnal sunshine is swept away.

A low pressure area moving east has brought a spell of wet and windy conditions to the country, with up to two falling in Scotland yesterday amid fears over flooding of homes and travel disruption.

Another brighter interlude will follow today with sunshine and showers, but a further spell of heavy rain and strong winds is due on Friday – with the worst conditions in the South.

The Met Office has warned another two inches of rain could then fall along with gusts of up to 55mph inland and 65mph on the coast. This weather system on Friday could be named Storm Alex, depending on its severity.

Temperatures will drop from the mid-teens Celsius to the low-single figures this week in parts of the UK, while frost is expected in many parts of the North and West by Friday. 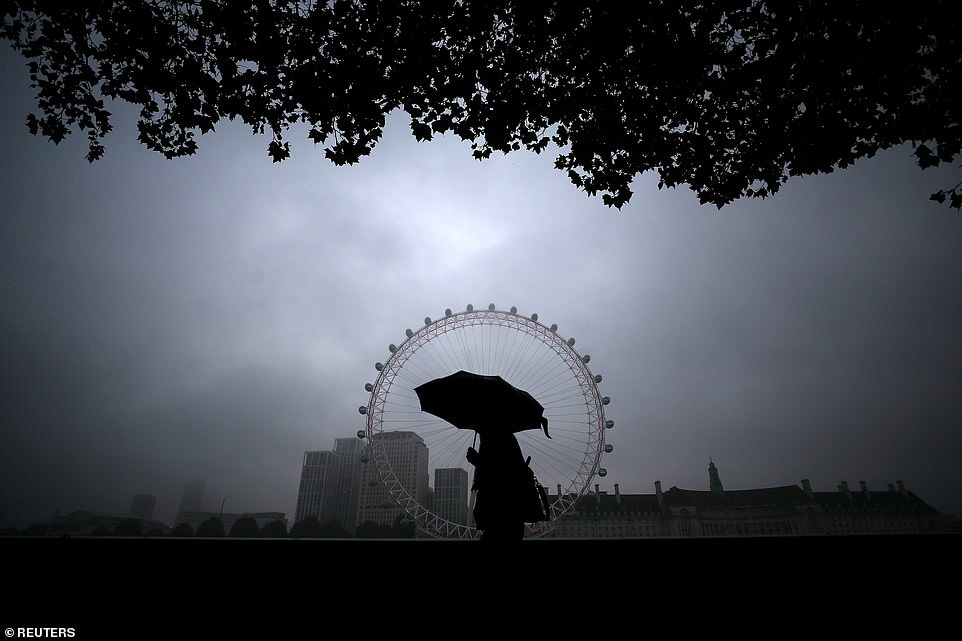 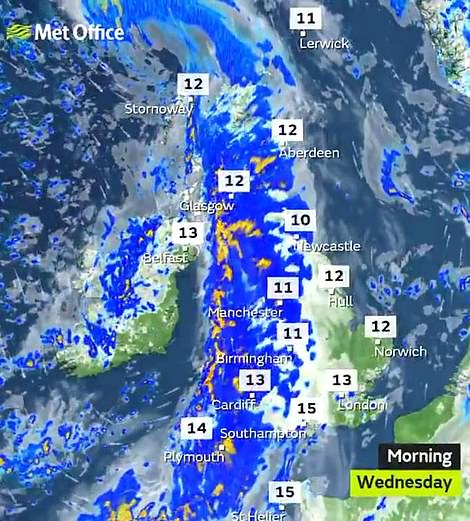 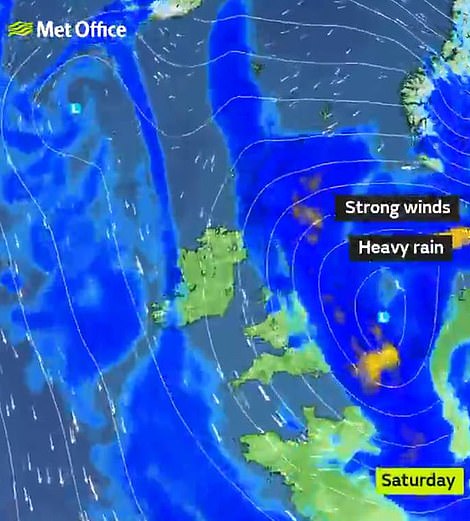 Craig Snell, Met Office meteorologist, said: ‘It looks like the wettest period for England and Wales will be on Friday going into Saturday. Southern England and Wales are likely to see the heaviest of the rain.

‘That will mean a chance of some problems with surface water which could affect transport. There is also a chance of gales around southern coasts in the later part of Friday into Saturday, with gusts of up to 60mph.’

The unsettled weather is expected to continue through the weekend and next week. Highs of just 13C (55F) are expected this weekend amid further rain – mirroring the chilly conditions seen last Saturday and Sunday.

A return to fine and settled weather is not expected until the middle of October, when ‘spells of fine and dry weather could become more widespread and long-lived’, with frost and fog at night.

The highest temperature of the week so far was 21.2C (70.2F) at Manston in Kent yesterday, while the low was -1.6C (29.1F) at Bramer in Aberdeenshire, also recorded yesterday.

BBC forecaster Helen Willetts said today will be a ‘thoroughly wet day’, adding that Storm Alex will be named as the first of the season if the winds this week are powerful to spark an amber warning. 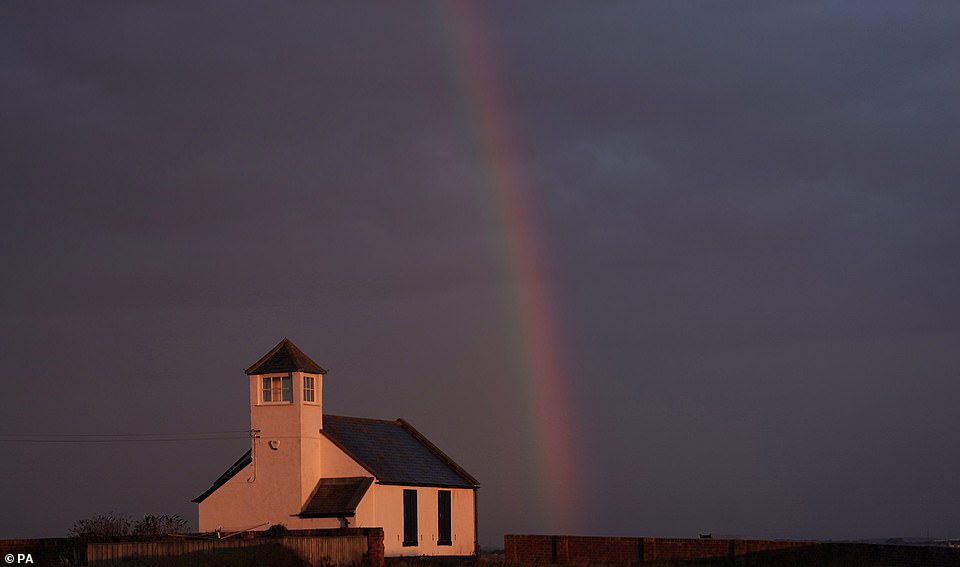 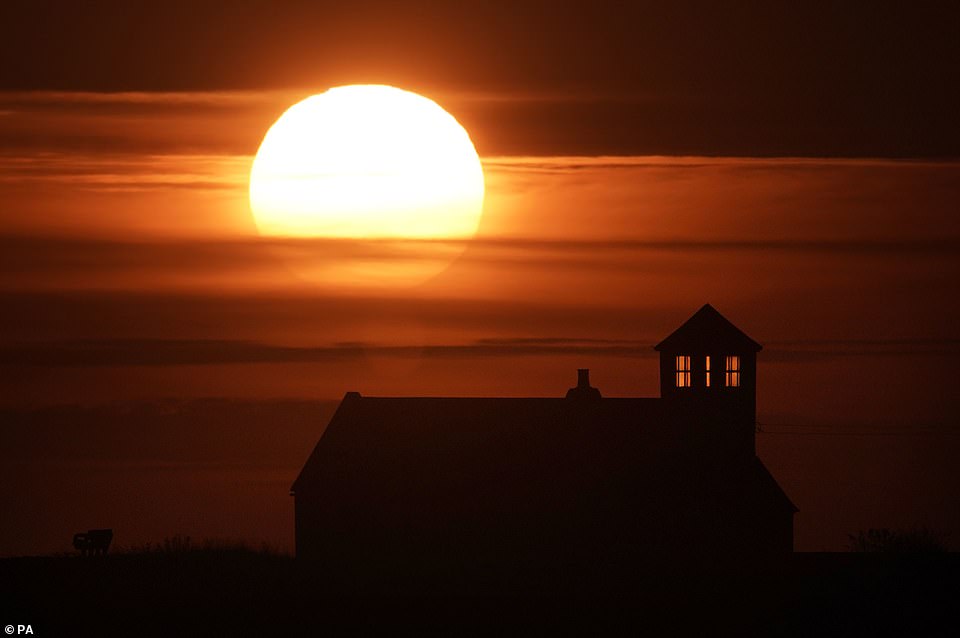 She added: ‘By Friday uncertainty remains as to where this area of low pressure will come. But once it does it’s going to bring in a spell of wet and windy weather, not just through Friday but into the weekend as well.’

And Aidan McGivern, a Met Office meteorologist, said: ‘Following a fine Tuesday for many of us, Wednesday will bring outbreaks of rain at times along with a freshening wind, gales around exposed western coasts.’

He said wind will pick up around western coasts with 50mph gusts in exposed spots. Mr McGivern added that a low pressure moving is will get ‘deepened quite furiously by the jet stream which dives to the south of the UK’.

He continued: ‘By Friday it’s significantly deeper and it’s likely to bring a significantly wetter period of weather during Friday and much of the weekend for various parts of the UK.’

Can’t get to the beach? It’ll blow to you in Norfolk…

Homes, cars and roads were blanketed in a thick layer of sand after a village was struck by a sand storm.

The phenomenon usually associated with arid, sun-blasted regions hit the wet and windy seaside community of Walcott in Norfolk.

Winds gusting at up to 70mph carried particles from the beach which was covered in 1.8 million cubic metres of sand last year to stop coastal erosion. 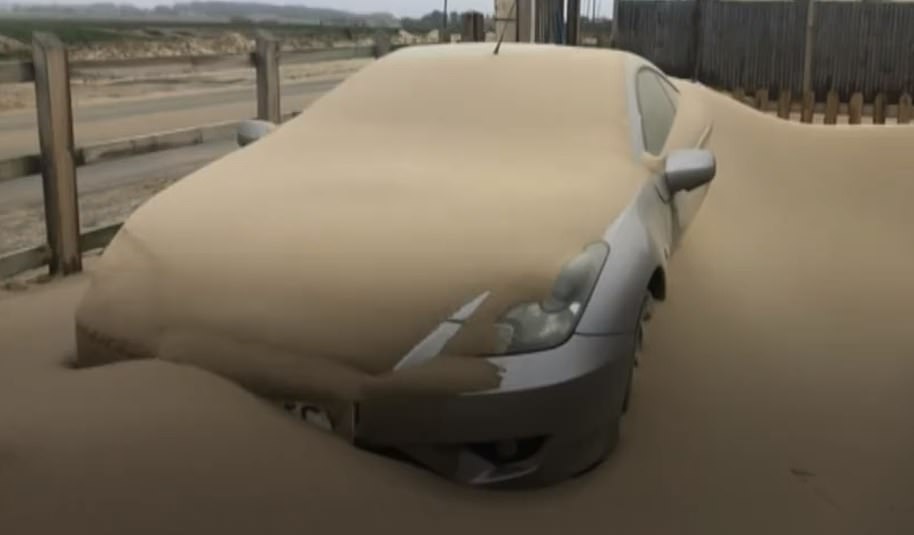 A thick layer of sand hit the wet and windy seaside community of Walcott in Norfolk on Saturday, covering cars 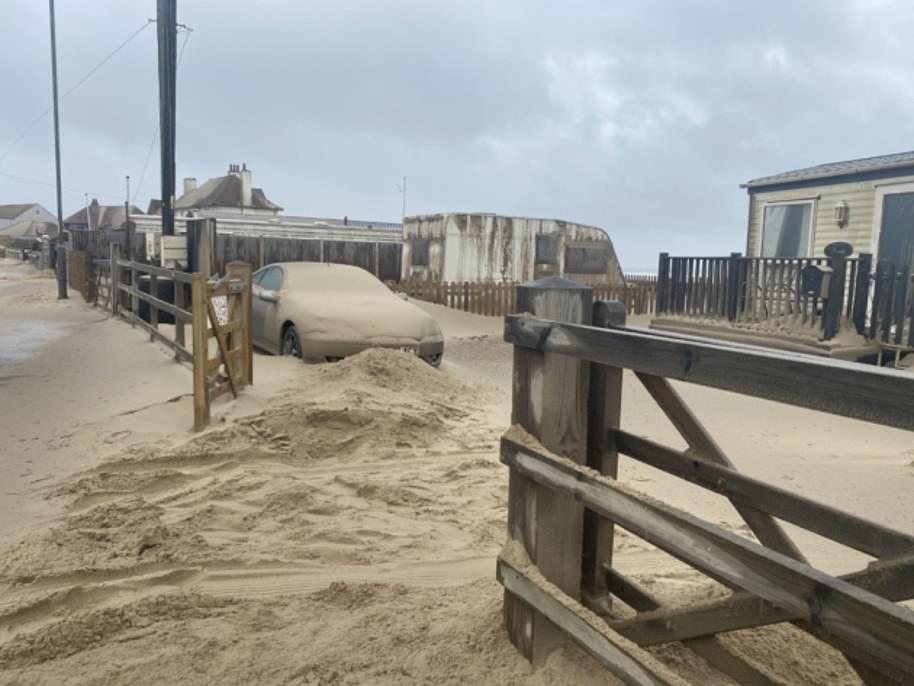 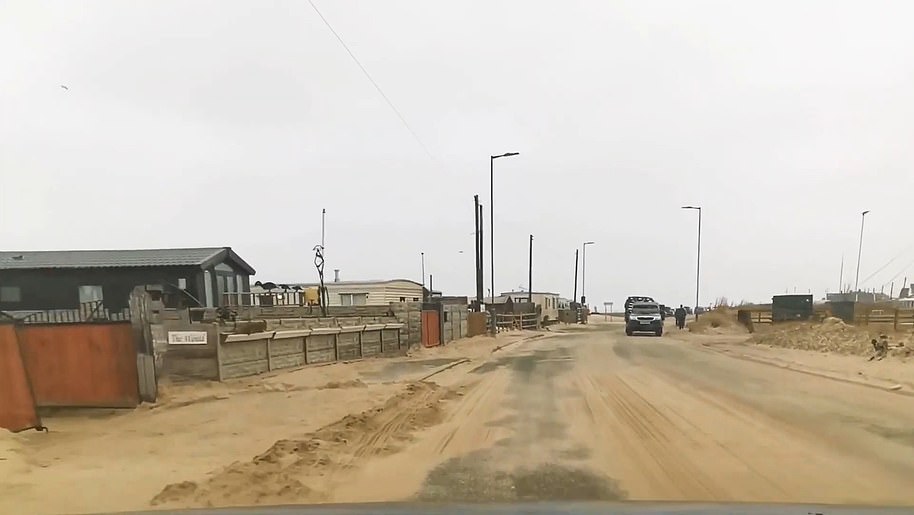 The beach at Walcott in Norfolk had been covered in 1.8 million cubic metres of sand last year to stop coastal erosion

Residents woke on Saturday to find themselves looking out at sand dunes. Jay Durrant said he ‘couldn’t believe it’ when he looked out of his window, adding that it will take up to a week to clear up the mess.

Caroline Stubbs said she had ‘never seen anything like it’ in 16 years as landlady of the Poacher’s Pocket pub. She added: ‘We have spent the morning digging ourselves a path out of the pub so customers can get in.

‘It has come through every nook and cranny of the building. I had to get a locksmith to come out as I couldn’t get my key into the door because of a build-up of sand.’

But Walcott Parish Council chairman Pauline Porter said the sand was ‘far superior than water and flooding’. She said: ‘It’s not nice but it is far better than sofas floating in a field.’