Slow blanketed parts of northern England and Scotland today as wintry weather returned to the UK with an Arctic blast of ice and -4C (25F) temperatures, bringing the onset of spring to an abrupt halt.

Up to 2in (5cm) of snow is set to fall over higher ground in parts of Scotland, Northumberland and the North York Moors – but the white stuff has also settled in northern cities such as Leeds and Sheffield this morning.

In addition, brief flurries were seen further south in the likes of London, Northamptonshire and Suffolk – with those on the school run caught out by the surprise conditions. Elsewhere, fields were left covered in snow, cars skidded off roads and police in Derbyshire reported three separate crashes on the A61 Dronfield bypass due to the ice.

The Met Office issued an ice warning covering the east coast of Britain all the way from the Shetland Islands down to Essex which alerted the public to snow and hail showers that could lead to icy surfaces on the roads.

Forecasters added that thundersnow – a phenomenon when thunderstorms form in wintry conditions – had already been observed in areas of England’s east coast from Newcastle-upon-Tyne down to north Norfolk.

Thermometers fell below freezing overnight as the cold front pushed down from the north – with temperatures still widely below zero at first light this morning, and a UK low of -4C (25F) at Cairnwell in the Scottish Highlands.

The conditions mark a stunning turnaround for the weather after last week’s early taste of summer that brought temperatures of 20.8C (69.4F) amid glorious sunshine that saw families flock to beaches and parks. 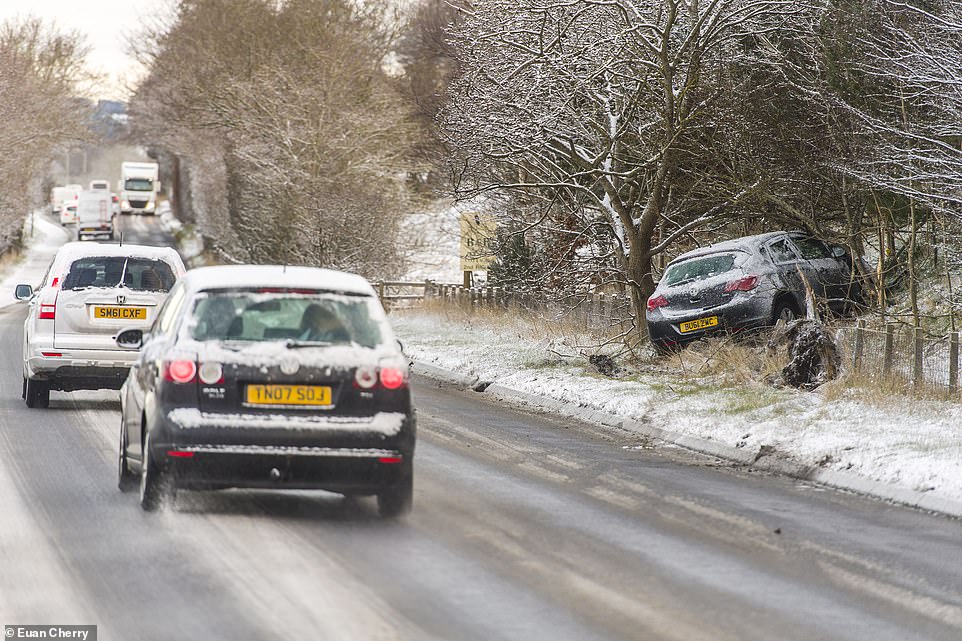 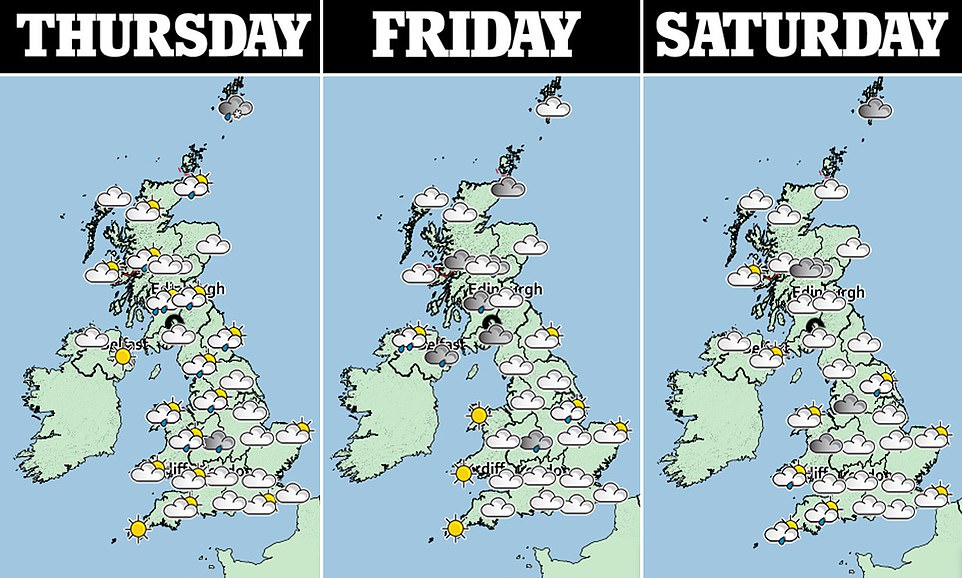 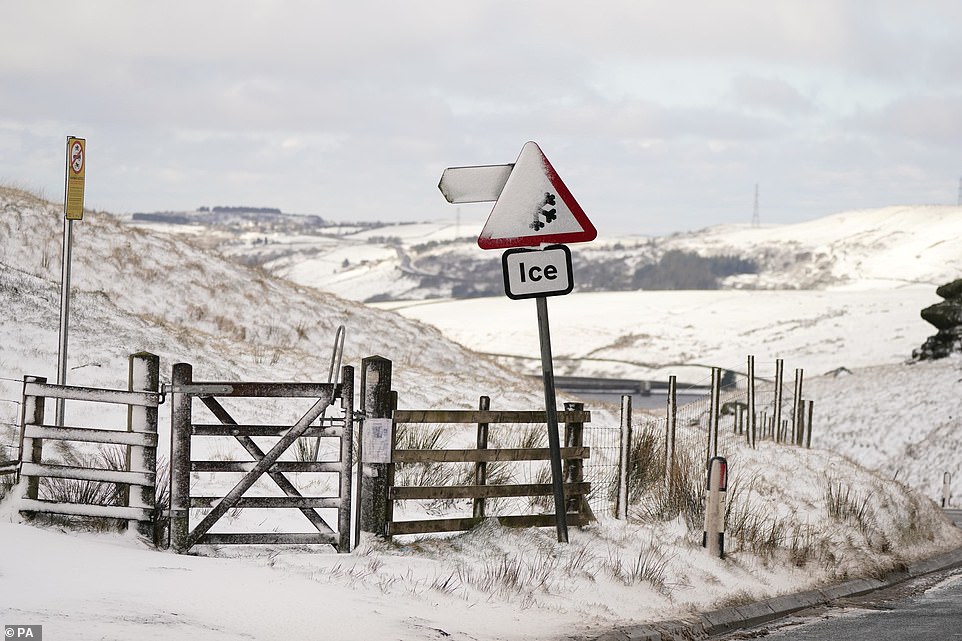 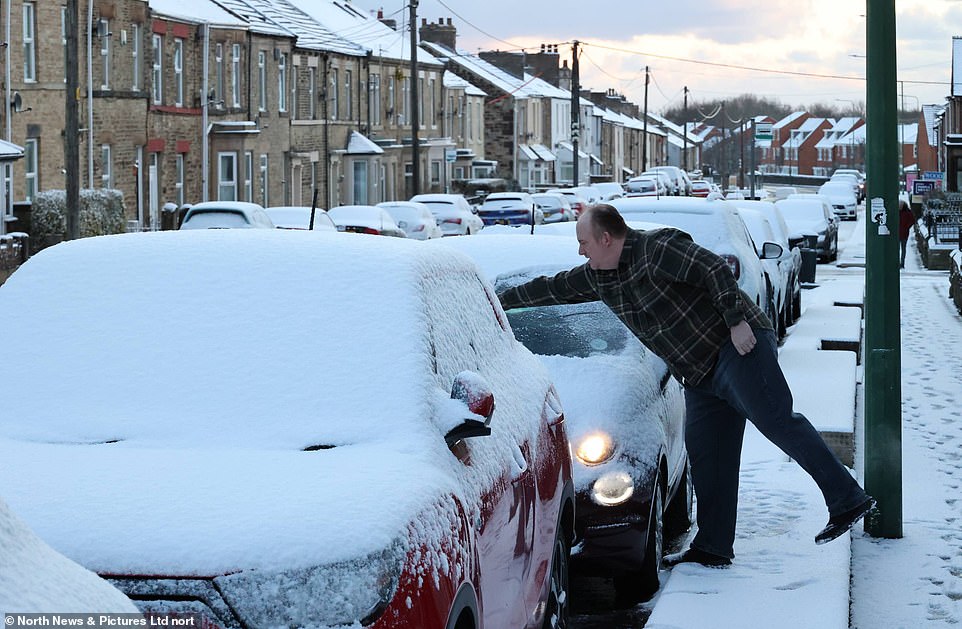 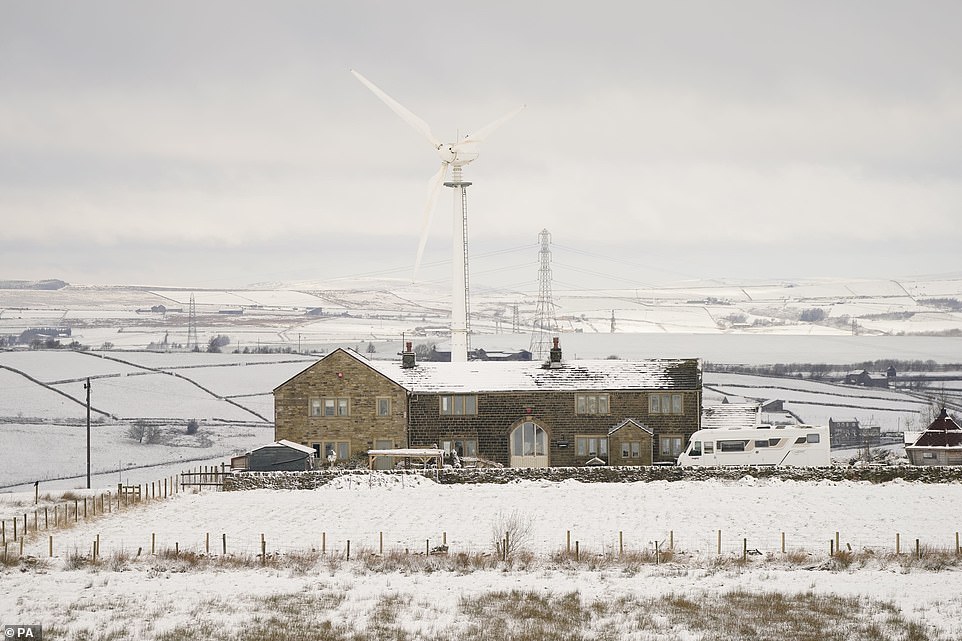 Snowy scenes in the village of Pole Moor in Kirklees, West Yorkshire, this morning as the country is hit by wintry weather 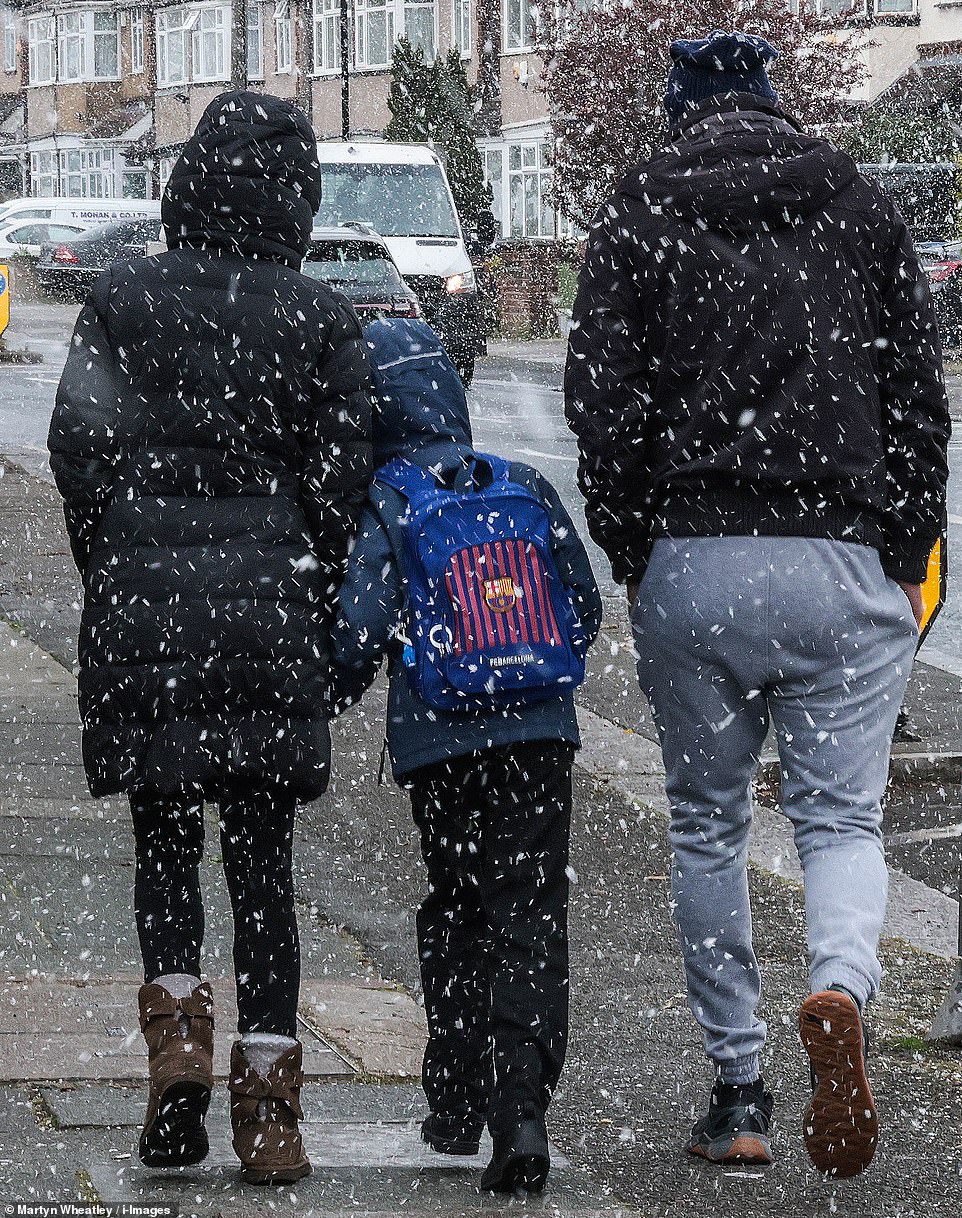 A family walk to school this morning through snow flurries in Northolt, West London, as the white stuff hits the capital 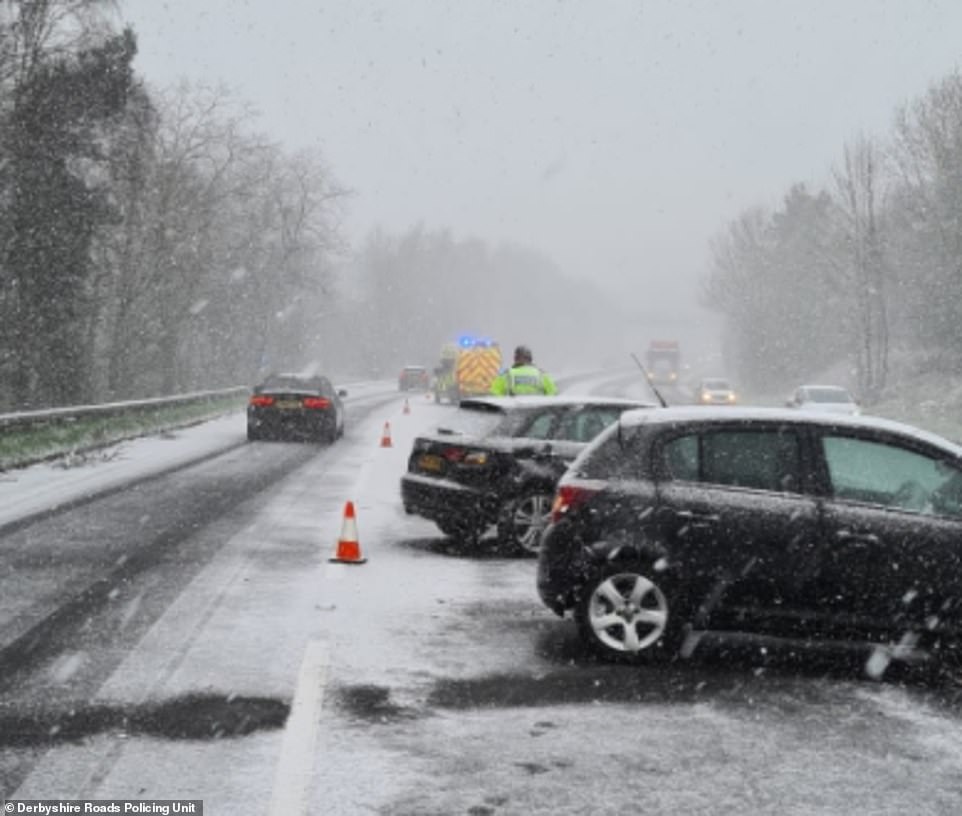 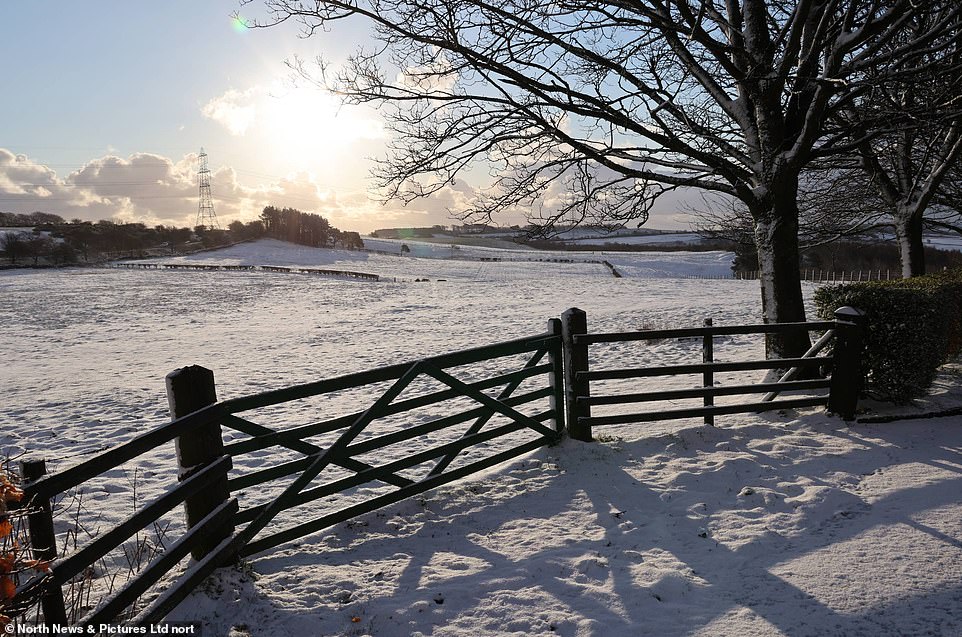 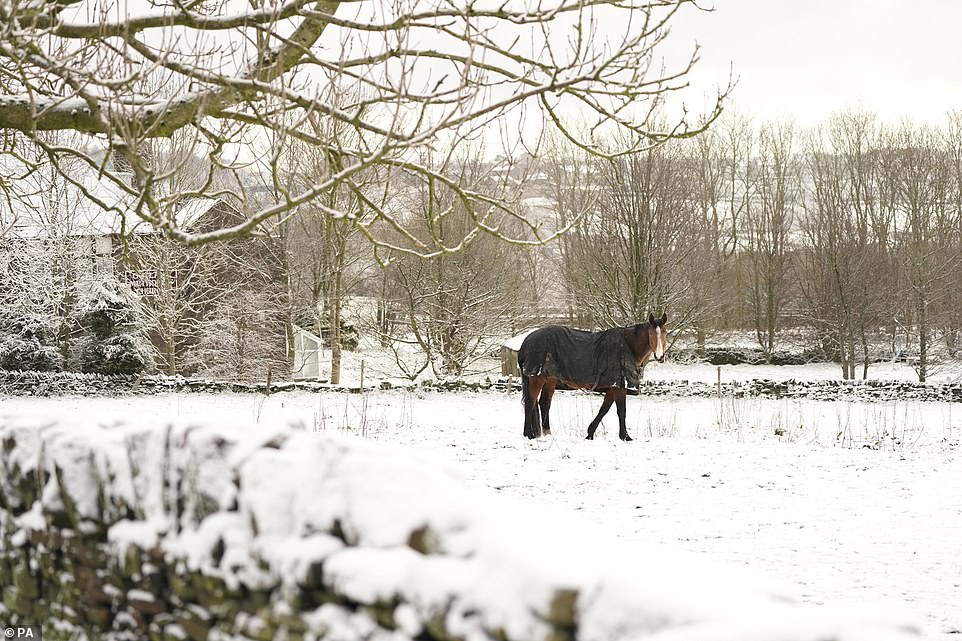 A horse in a snowy field in the village of Outlane in Kirklees, West Yorkshire, this morning as wintry conditions hit Britain 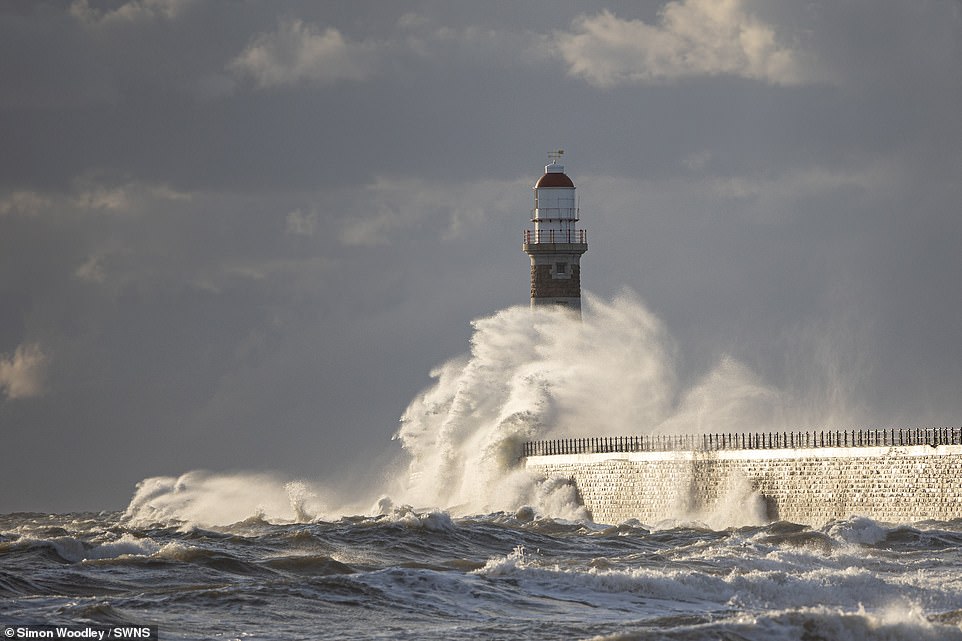 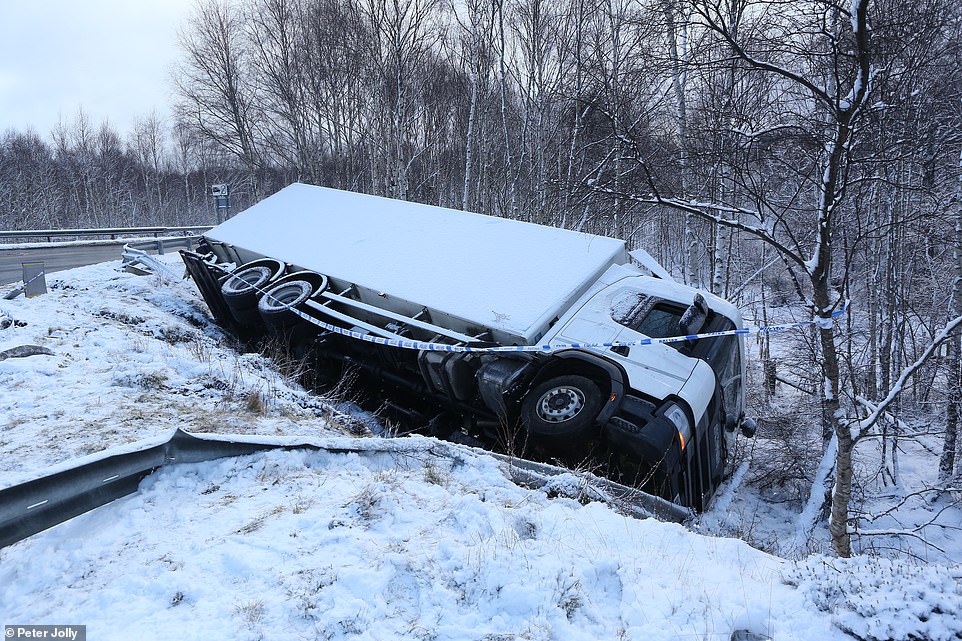 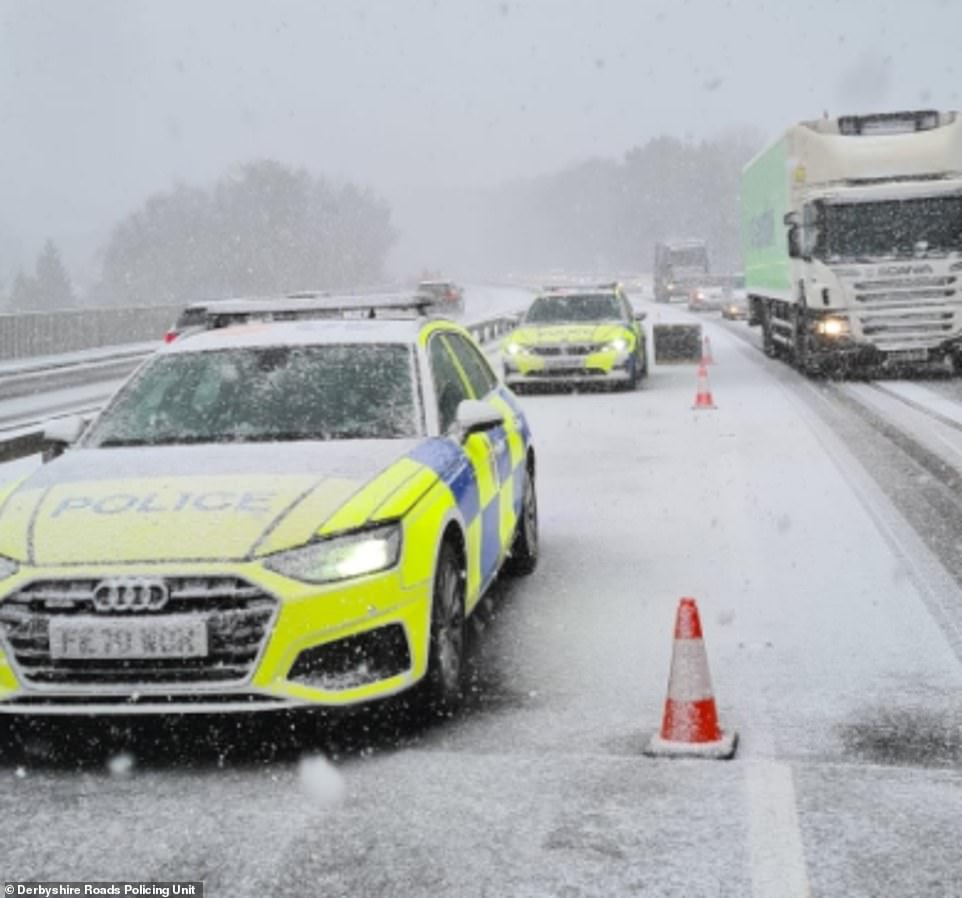 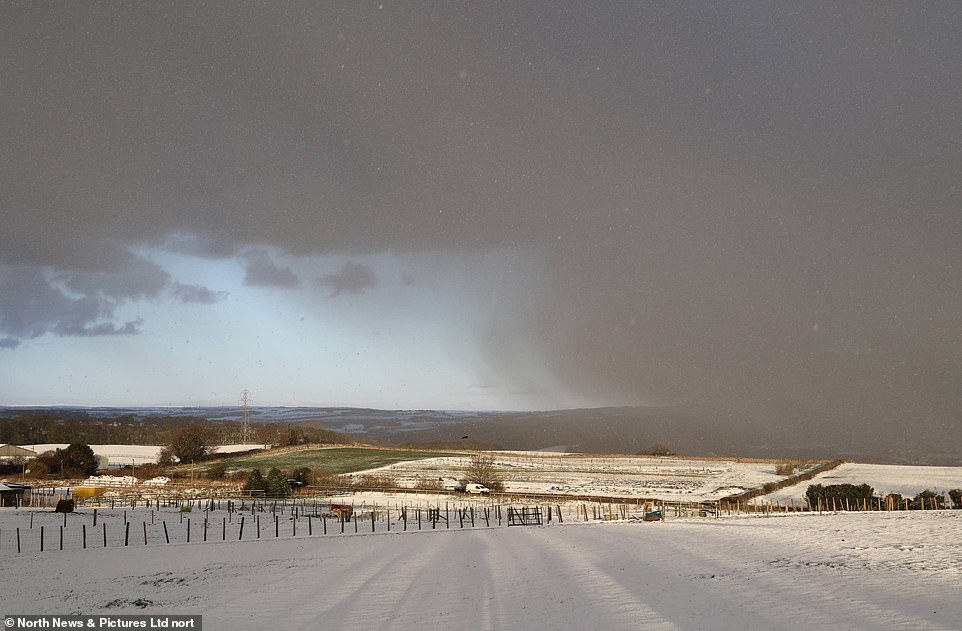 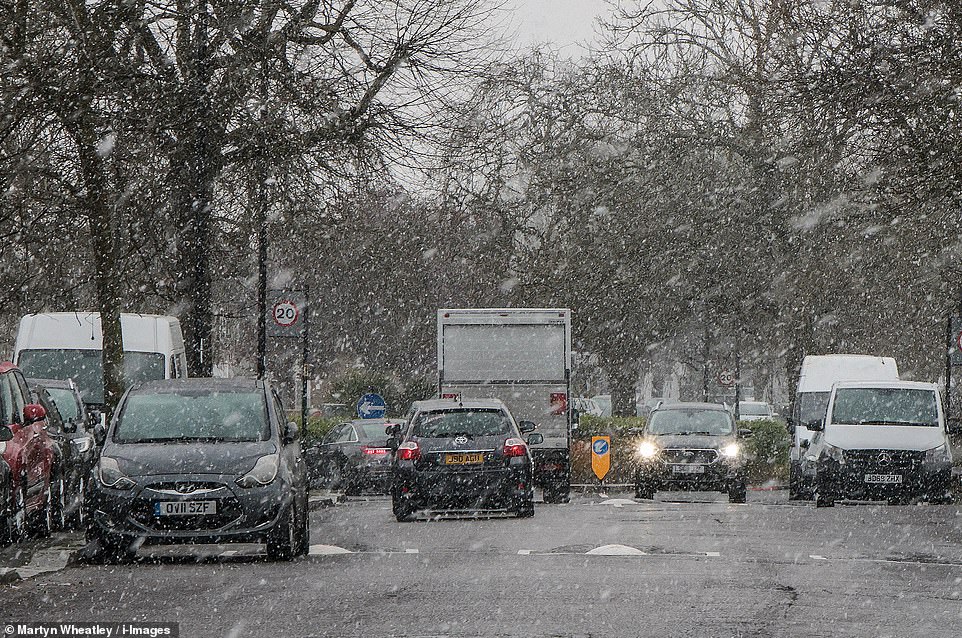 Snow flurries in Northolt, West London, this morning as temperatures drop below zero in many parts of Britain today 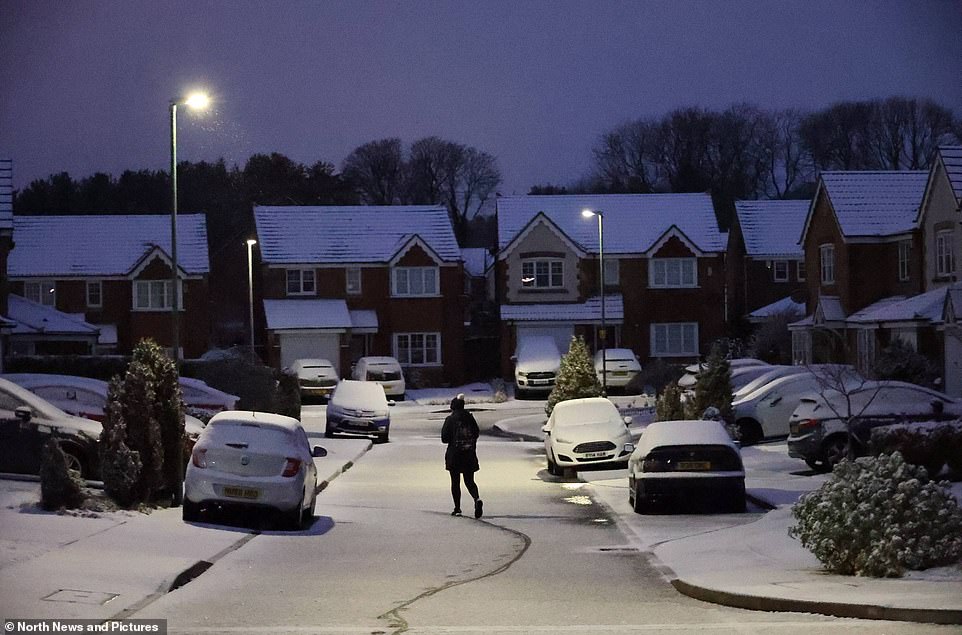 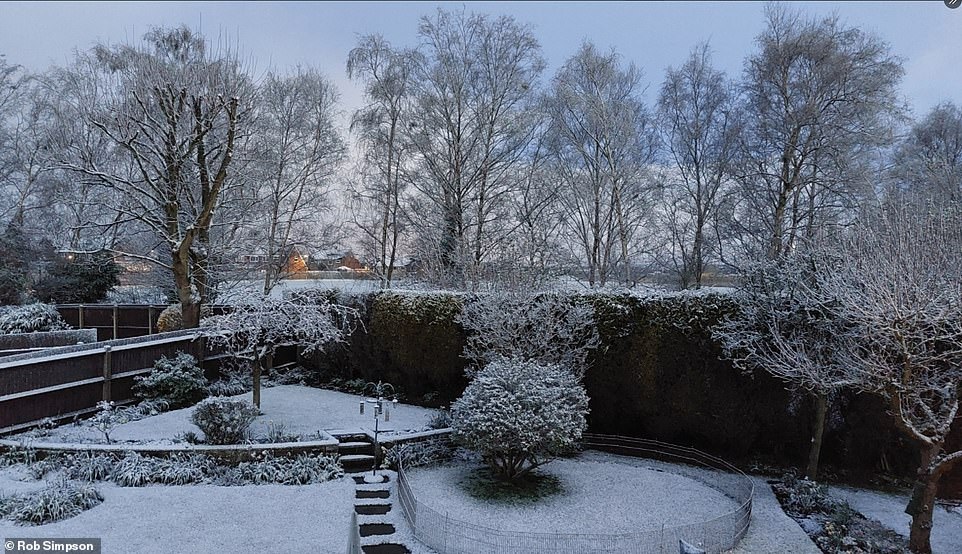 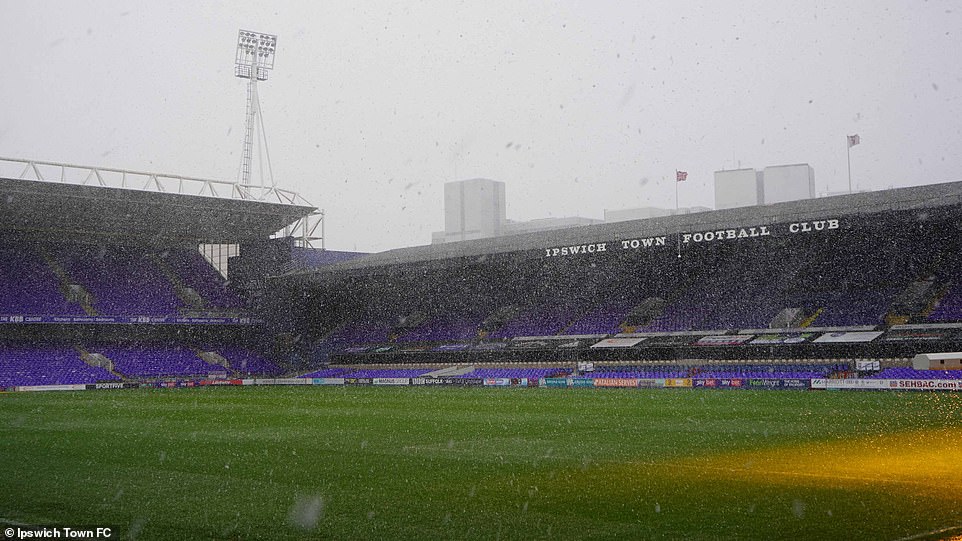 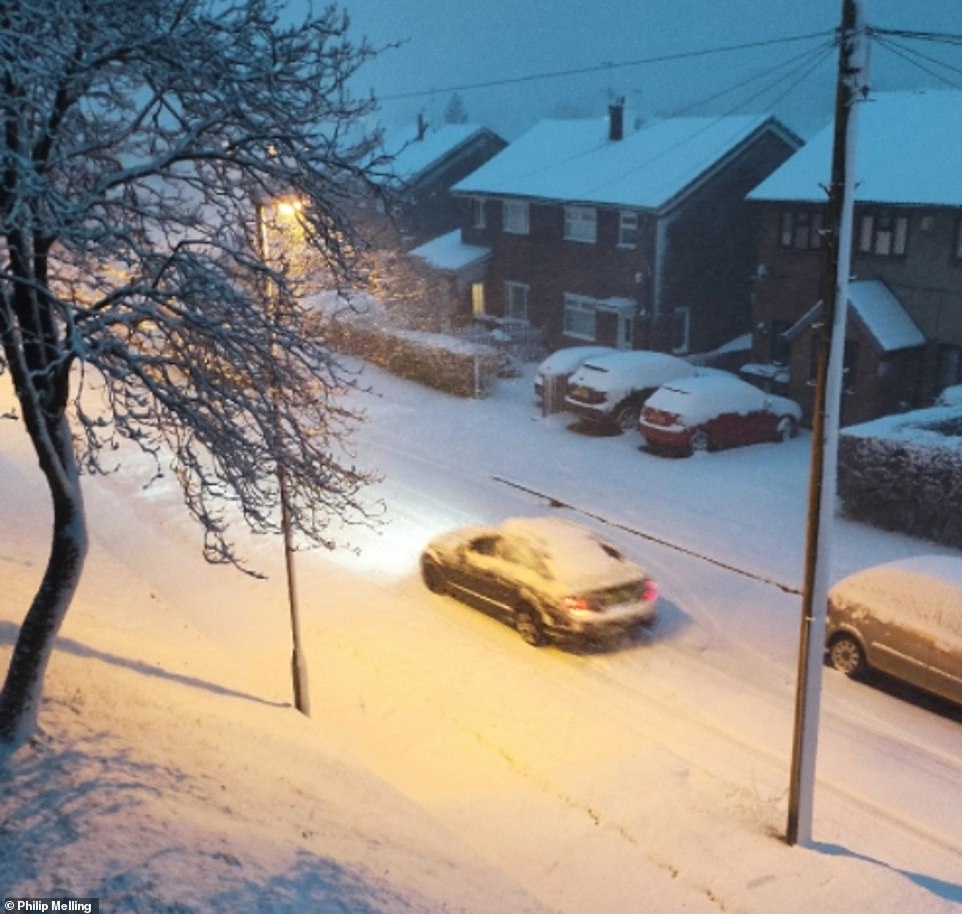 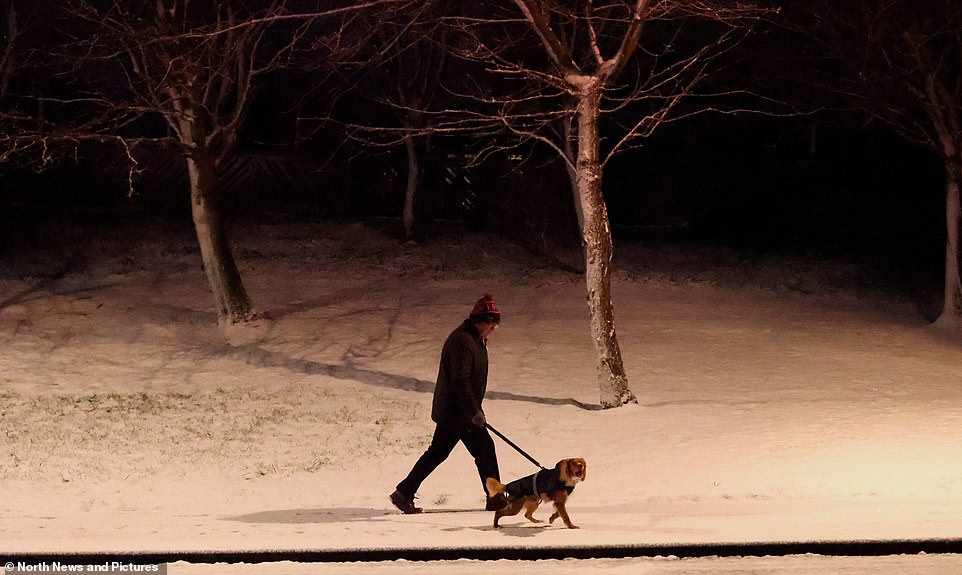 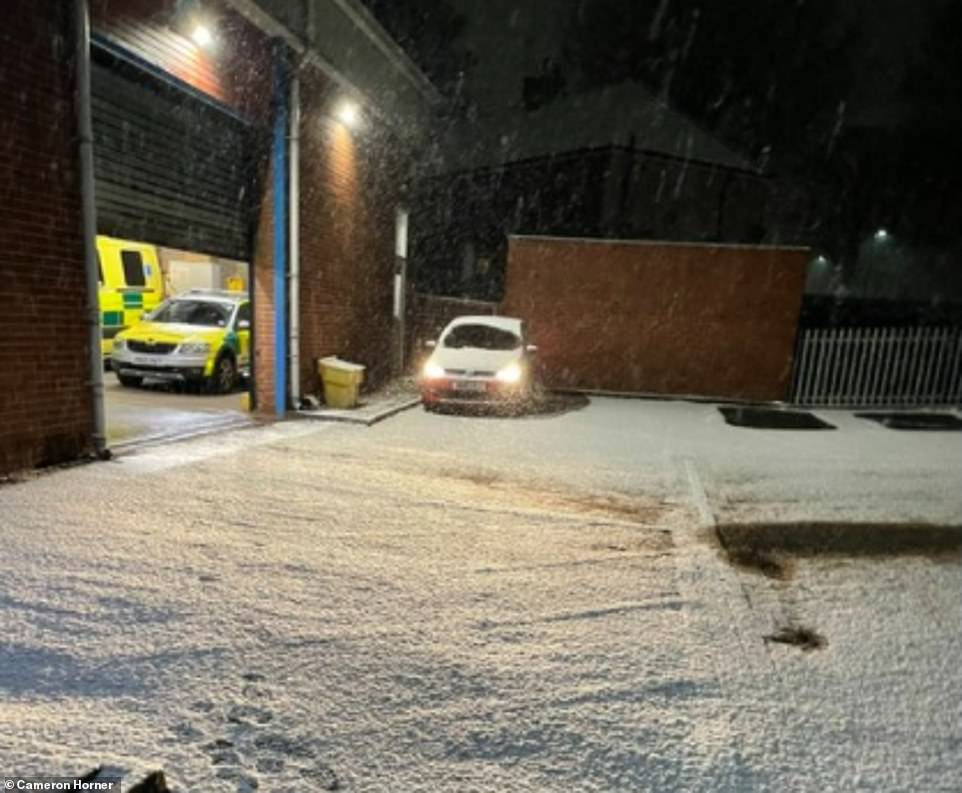 Snow was seen on the ground in Sheffield and Leeds this morning, one day after rural areas of County Durham, Northumberland and Cumbria were covered in the white stuff. Conditions are likely to remain icy for a few days.

Councils in Newcastle City, North Tyneside and Gateshead have all introduced their severe weather emergency protocols – which includes services to help people who are sleeping rough try to stay safe. 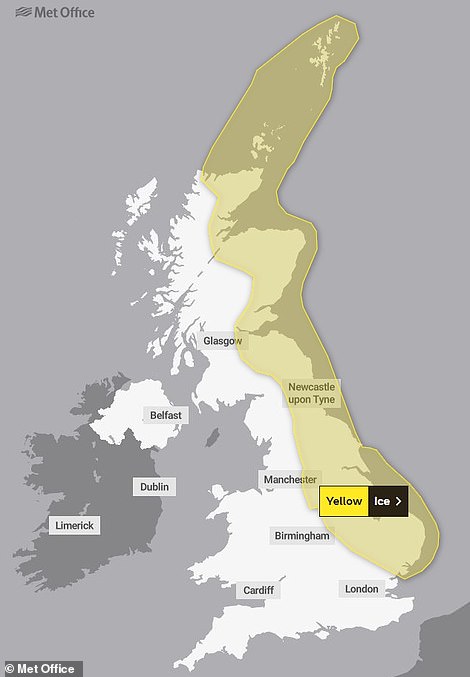 A Met Office ice warning in place for Britain this morning

They are urging people to get in touch if worried about someone who is sleeping rough – with temperatures set to drop 10C lower than those registered last week, and well below average for this time of year.

Overnight temperatures tonight could plunge down to -8C (17F) in the Scottish Highlands and -5C (23F) in rural parts of northern England, and the Met Office weather warning for ice will be place until 10am this morning.

The Met Office said the most snow will be on higher ground above 650ft (200m) in Scotland and northern England, but other areas up to 330ft (100m) above sea level could see 0.8in (2cm) fall in wintry showers.

Roads could be affected by snow amid travel delays, and other areas of Britain will not escape the chilly conditions.

Rain and sleet will hit many parts of the UK, with widespread overnight frosts and chilly single figure temperatures by day. The cold front will see temperature highs at half the levels of last week.

Forecasters say the pattern of ‘wintry showers’ and colder temperatures is expected to last until Sunday when the cold weather should start to ease with milder conditions.

Met Office meteorologist Richard Miles said: ‘The change is down to an Arctic maritime air mass over the whole of the UK. The wintry showers could crop up anywhere.

‘The sleet, snow and rain showers will continue for the rest of the week on and off, with clear spells in between. Although lots of places will see wintry showers, mostly you are not going to see it accumulating on the ground.’

No heatwave until it’s 28C

The temperature at which a heatwave is declared is being increased in eight counties as the climate warms.

Heatwaves are called when an area has at least three days in a row with daily maximums hitting or exceeding a threshold.

Levels are designed to be relative to the current climate and, with global warming pushing up UK temperatures, thresholds are being increased for parts of England.

His colleague Aiden McGivern added: ‘The last few days have seen a significant trend. A trend away from sunshine and temperatures of 20C to Arctic air coming south across the UK behind a cold front which has brought, in some places, snowfall.

‘As it crosses the south of the UK for the start of Thursday, it could even bring some slight snow coverings to south-eastern areas.’

This would be mainly over the hills and may touch on places such as the South Downs and the Chilterns, but it would not last long as the sun will soon clear it up.

Mr McGivern said: ‘There will be further wintry showers coming into the east and the north through Thursday on a biting north easterly wind which will be particularly strong on the coast of Kent. There is a potential for gales on exposed spots.’

There will be some sunny spells, but Mr McGivern described it as ‘a bright day if on the cold side with and temperatures that are well below average for this time of year’ before the skies clear this evening.

Mark Newberry, commercial director at breakdown firm Green Flag, said: ‘Although many of us thought the colder weather was behind us, it’s unfortunately starting to feel like winter again.

‘After the lovely sunshine of recent days, the temperature is set to drop even further towards the end of this week, with some parts of the UK expecting snow, sleet, and icy conditions. Green Flag is urging drivers to take extra care when setting off on their journeys.’

And Guy Barter, of the Royal Horticultural Society, warned the drop in temperatures could be a blow for gardeners.

He said: ‘Colder weather will slow plant growth and inhibit plums’ and pears’ pollination, as insects fly less in cold dull weather. Tender plants won’t be put outside for another month at least but lower light affects greenhouses and will slow their growth.’

6 Ways To Find Inspiration For Writing

The Future of the German Automotive Industry

The Future of the German Automotive Industry