Britain is to get its first proper taste of winter at the end of this week, with temperatures plunging towards zero and snow and floods on the way.

Gritter lorries were spreading salt and sand against a wintry backdrop in Scotland this morning, with the Met Office insisting snowstorms are also possible at ‘lower levels’ in Northern England.

Elsewhere, warnings have been issued along the North Norfolk coast, where there are fears high tides, whipped by the strengthening winds, will sweep over defences and swamp homes and businesses.

The Thames Barrier is also due to close, with strong northerly winds creating a storm surge that is expected to be funnelled along the Thames Estuary.

As the mercury plummets towards freezing point, with temperatures already as low as 2C (35F) north of the border, police are urging drivers to take care, warning that trees could be toppled by gales.

Weather forecasters say sleet and hail will batter Britain for the rest of the week, with lows of 1C (33F) after reaching a balmy 17C in some places just two days ago.

Drivers in the village of Tomintoul in Moray, Scotland, had to scrape snow and ice off their windscreens before braving the treacherous conditions 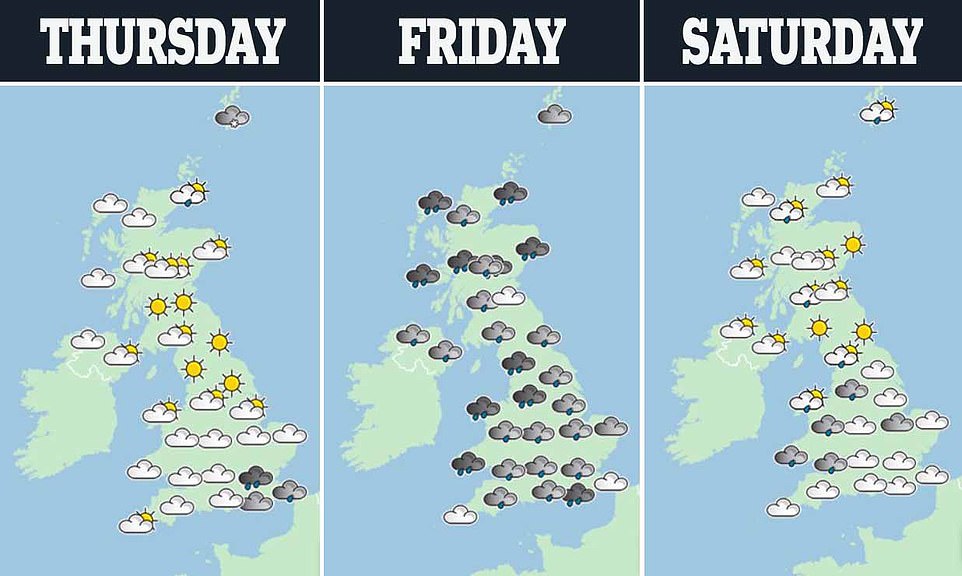 A graphic shows the weather forecast for the UK over the next three days, with low temperatures and rain widely expected 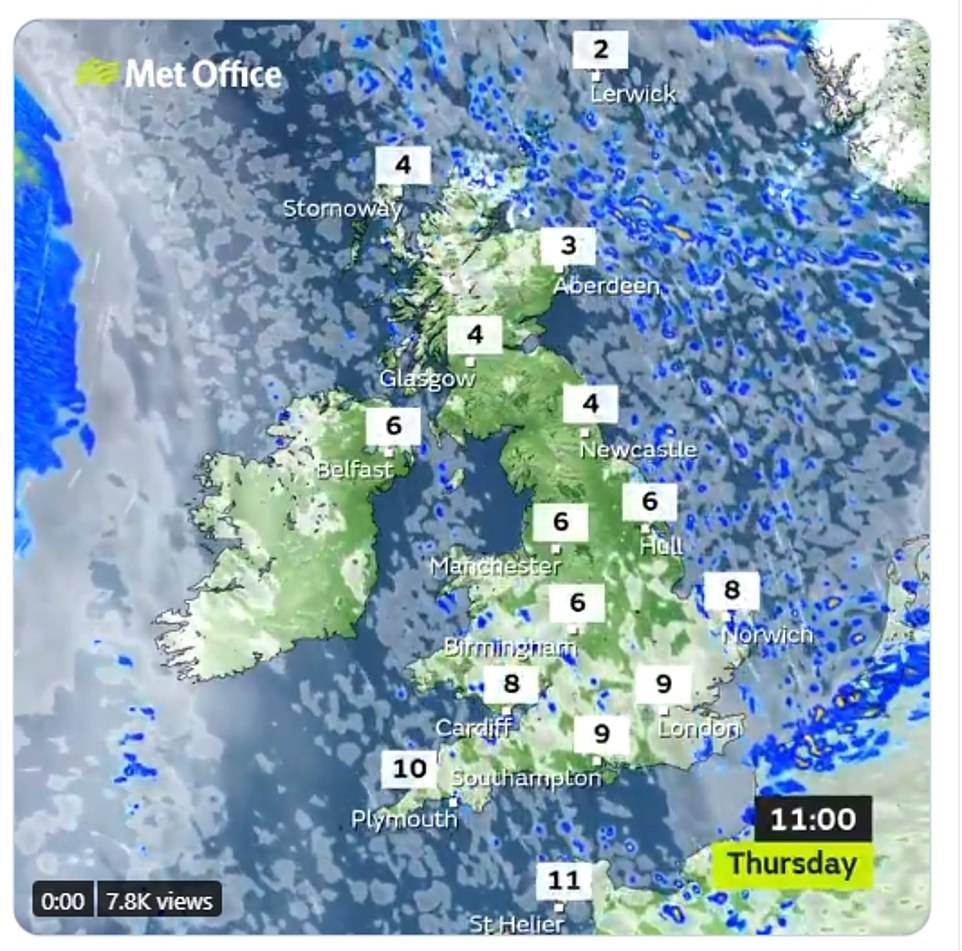 A Met Office weather map shows how temperatures are falling today, with the mercury as low as 2C in some parts of Scotland 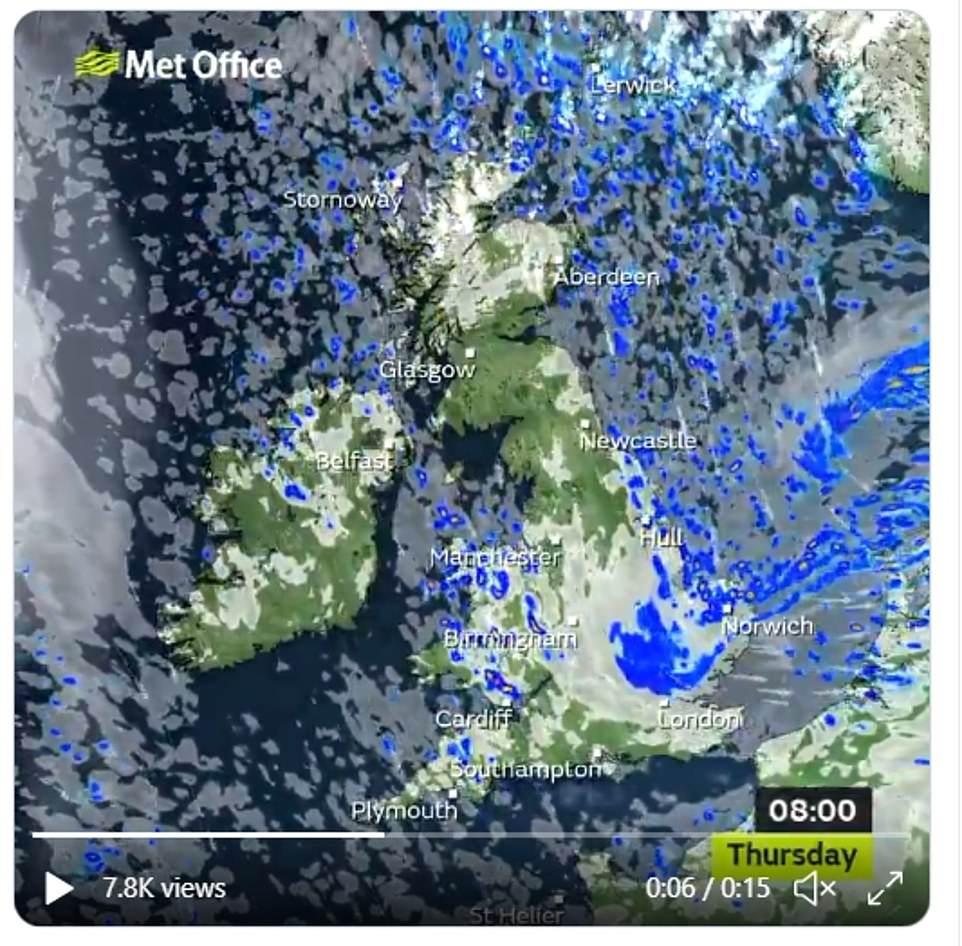 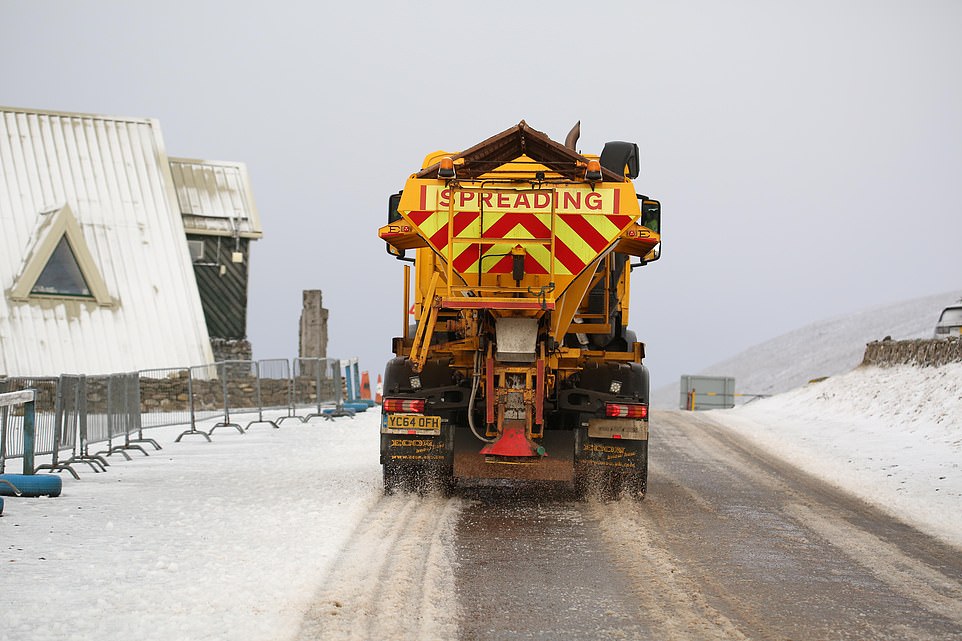 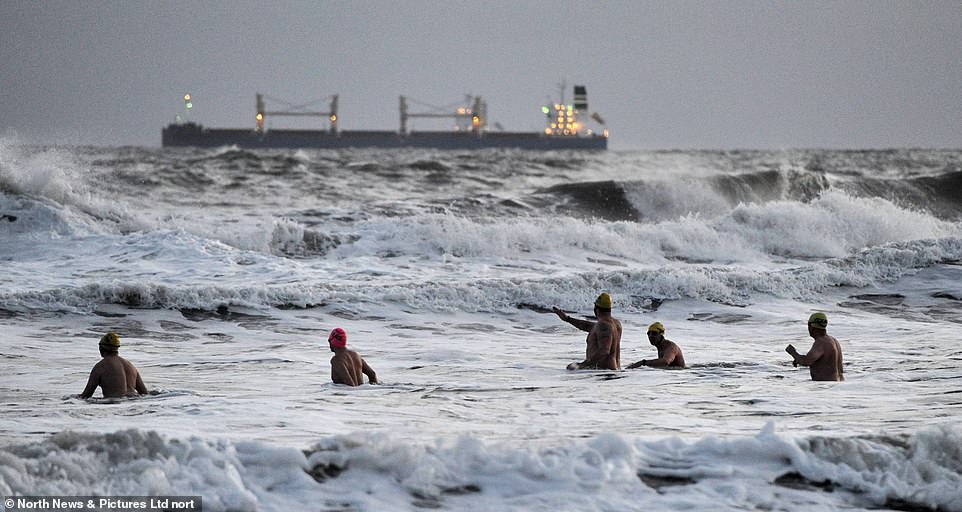 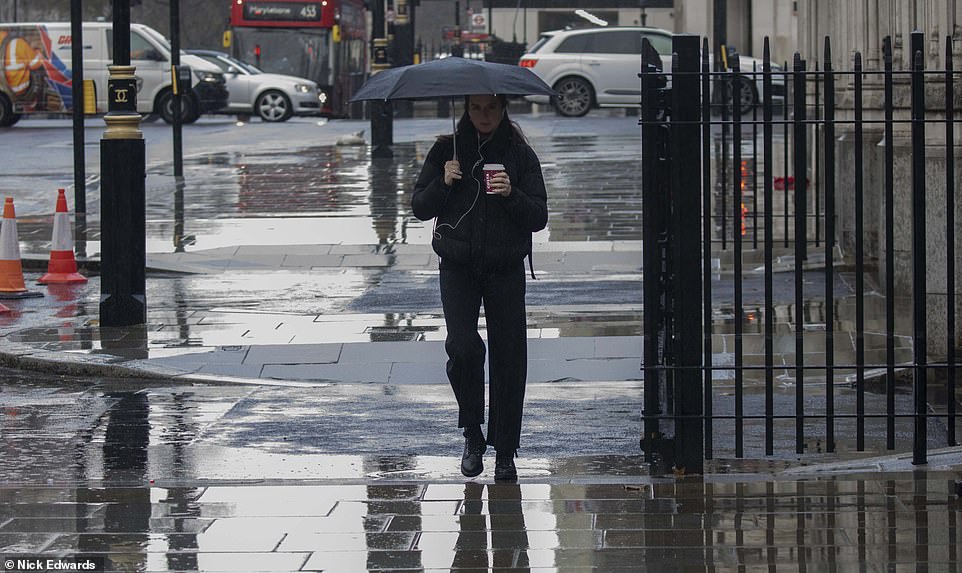 A woman holds an umbrella and a warm coffee as she walks through the rain on a dreary day in Westminster, London 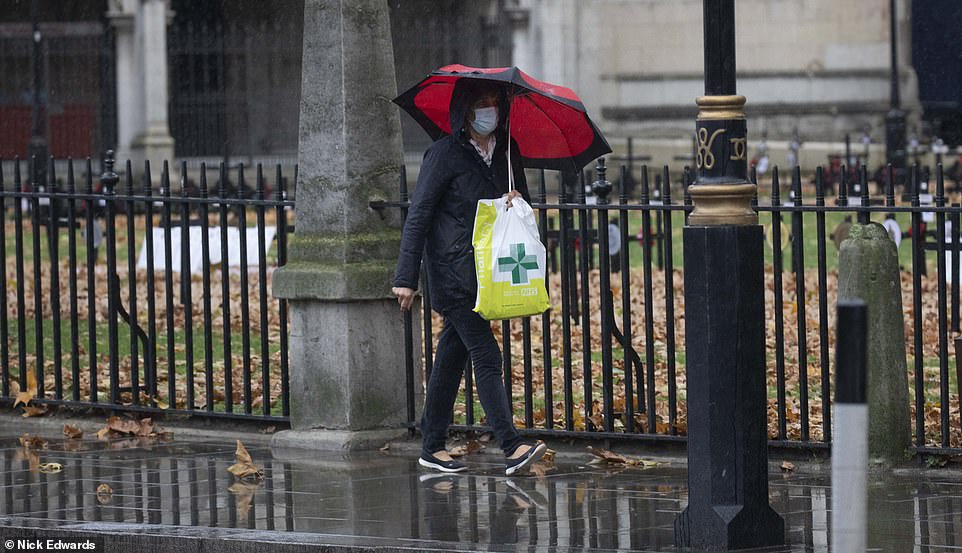 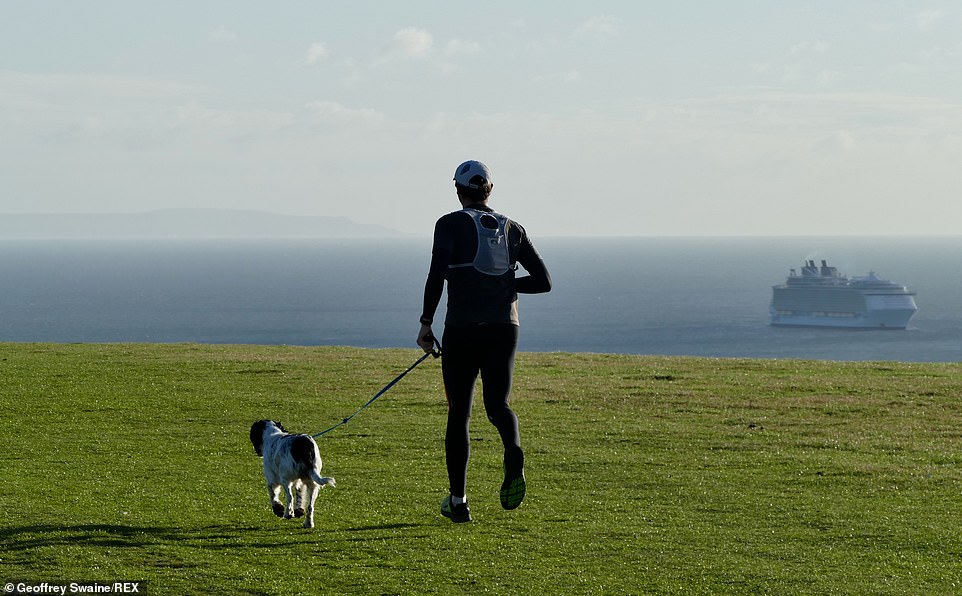 A jogger takes their dog for a run on a sunny but blustery morning in The Purbecks in Ballard Down, Dorset, earlier today 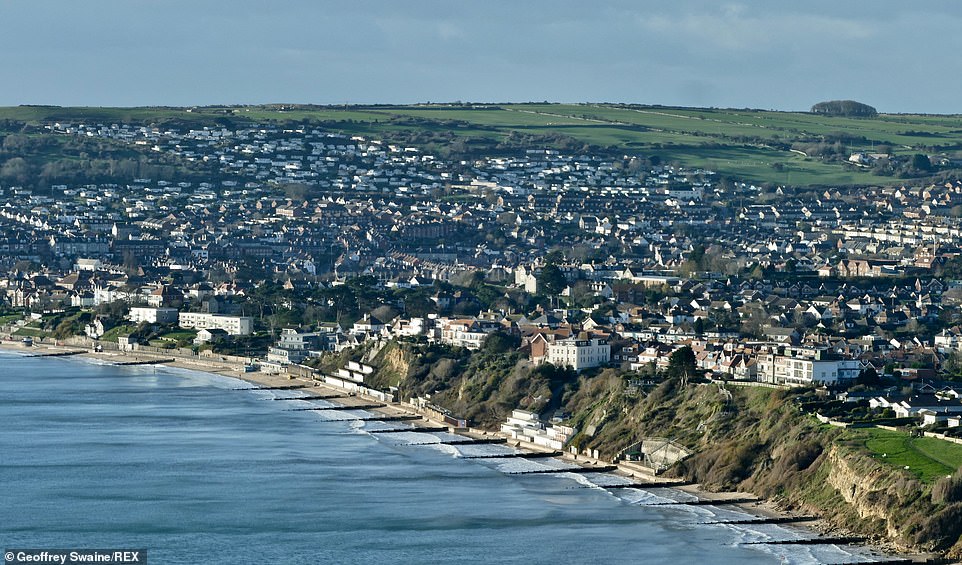 The view down to the Swanage coastline from The Purbeck Hills on a bright but chilly morning in Ballard Down, Dorset today 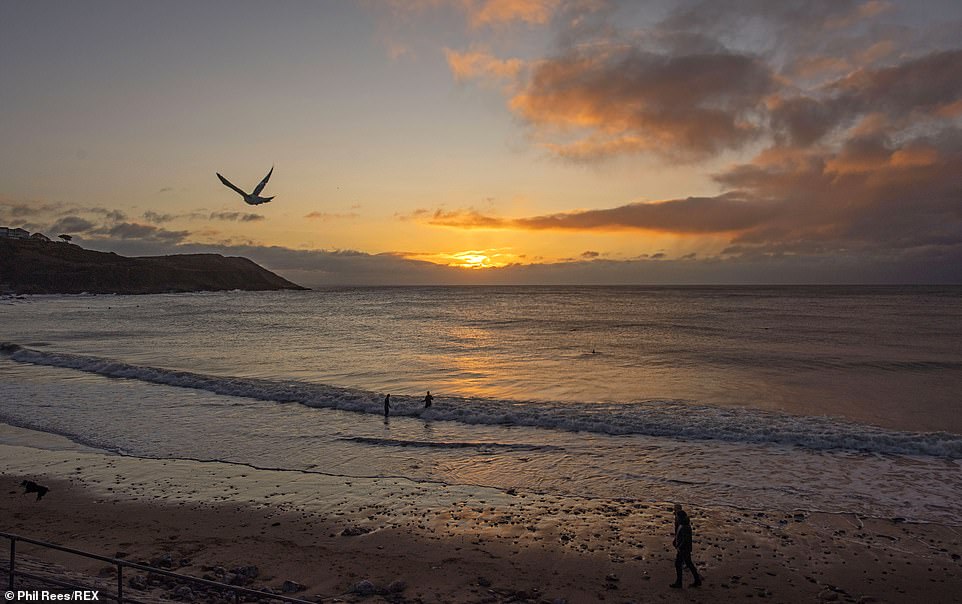 Bookies are offering odds of 4/6 for snow to fall in any major city by the end of the week, with temperatures to reach zero available at 4/9.

Coral spokesperson John Hill said: ‘The big freeze is on its way with temperatures likely to drop to 0C before the week is out, according to our odds.

‘With temperatures plummeting fast, it opens up the prospect of many parts of the UK seeing snow later this week.’

Meanwhile, the Environment Agency has said immediate action is needed in North Norfolk, facing out on to the North Sea.

Residents in villages including Watcott, Bacton and Salthouse, where there could be tidal flooding being expected. were nervously awaiting the worst of the weather.

Three flood warnings are in place in the north of the county, for the area spanning from Wells Quay as far as Bacton, with the EA warning that the worst of the floods are likely to come between 7.15am and 11.15am.

‘This warning is due to weather forecasts indicating that tides are expected to be higher than usual and therefore a surge could happen,’ they said.

‘People are urged to take care using coastal roads and footpaths and not put themselves in unnecessary danger.’

Elsewhere, there are several other less severe flood alerts in place across various parts of the county.

These state that flooding is possible in across the eastern coastline in the Great Yarmouth and Waveney areas, and in western parts of the county such as Hunstanton.

Met Office forecaster Alex Deakin said ‘It is going to turn much colder over the next 24 to 48 hours, Thursday particularly cold thanks to some strong winds.’

In the topsy-turvy weather, Britain endured its wettest day on record in October, with enough rainfall to fill Loch Ness.