German Chancellor Olaf Scholz has been accused of weakening Europe by refusing to take a hard line on Russia despite warnings that Putin is about to invade Ukraine.

Scholz, who took the job from Angela Merkel last month, has tried to maintain his predecessor’s warm relations with Moscow by refusing to supply Kiev with arms and ruling out sanctions on the Nord Stream 2 gas line if an attack goes ahead.

But the SDP leader – a socialist while he was a student – now stands accused of aiding Putin and undermining the West by creating rifts within the EU, NATO, and even his own fledgling coalition over the best way to deter the Russian strongman.

Today, the German government even went so far as to brief journalists that cutting Russia off from international banking systems – the so-called ‘nuclear option’ of sanctions – was off the table, prompting angry denials from Washington. 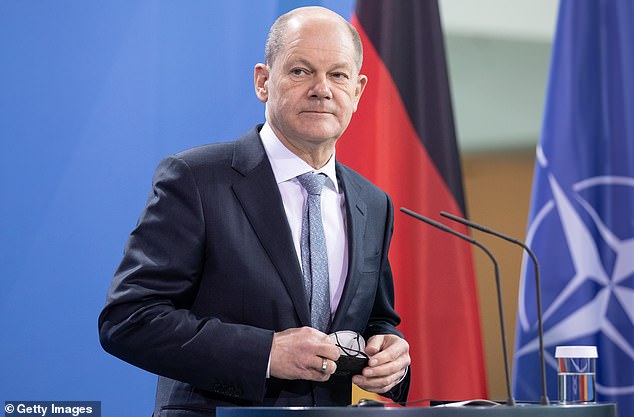 Olaf Scholz, Germany’s new Chancellor, has been accused of weakening NATO, the EU and his own country with a soft stance towards Russia even as Putin gears up to invade Ukraine

Western nations were said to be backing off from the idea over fears it would disrupt international markets, according to a government source who spoke to Germany’s Handelsblatt newspaper.

But the line was quickly slapped down by the US National Security Council, which insisted ‘no option is off the table’ as Secretary of State Anthony Blinken prepares to head to Moscow for a fresh round of talks.

It is just the latest incident of Germany blinking in the face of Russian aggression, after Scholz ruled out exporting weapons to Ukraine to defend against any attack.

He insisted on Monday that Germany has a long-standing policy of not exporting weapons even for defensive purposes, and does not intend to change it.

The same day, Scholz also dodged a question from a reporter over whether the Nord Stream 2 pipeline could be targeted for sanctions if Russia attacks.

The pipe, which runs from Russia to Germany while bypassing Ukraine and depriving Kiev of vital transport revenues, was completed last year but has yet to be opened.

Scholz has previously insisted – despite evidence to the contrary – that the pipeline is not a political project and thus should be exempt from sanctions.

Asked by a reporter in Madrid whether he still held that opinion, Sholz demurred – saying only that Russia will face ‘serious consequences’ if it attacks Ukraine.

Defense Minister Christine Lambrecht and SDP party Secretary-General Kevin Kühnert, two close allies of Scholz, also spoke out in defence of the pipeline last week – saying it should be exempt. 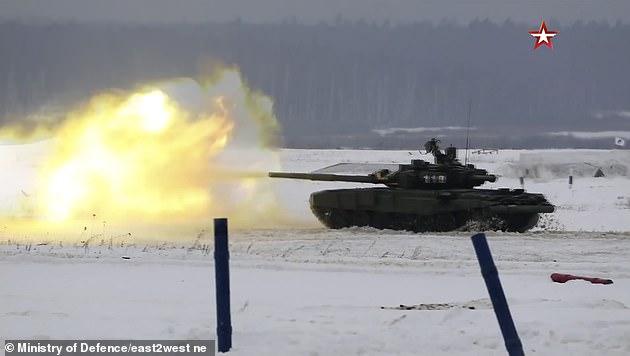 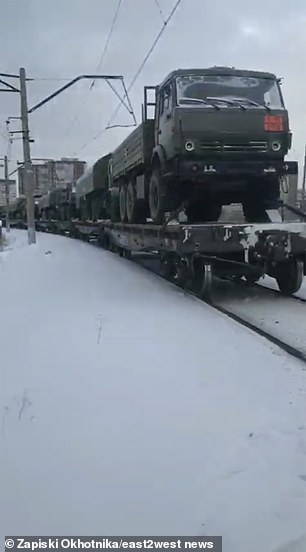 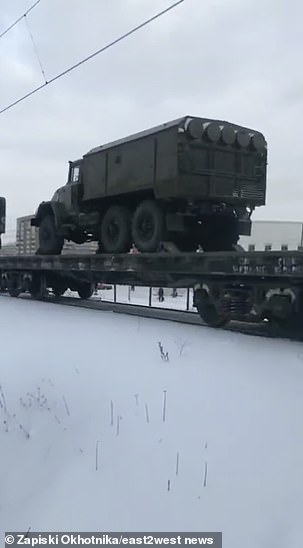 That is at odds with the government’s own Defence Minister, Annalena Baerbock – a member of the Green Party – who said on a visit to Kiev that it could be hit.

Such divisions ‘are weakening Germany and the EU’, according to Stefan Meister, an expert on Eastern Europe for one of Germany’s most-respected foreign policy think-tanks who spoke to the FT.

His words echo an open letter signed by 70 German academics and foreign policy heads at the weekend which calls on the government to urgently re-think its stance towards Russia.

German ‘passivity’ towards Russian aggression over the last 30 years has hurt the West and emboldened Putin, they argue, saying that his invasion of Crimea in 2014 was the ‘logical consequence’ of Belin’s policies.

‘[Germany’s] Russia policy must be fundamentally corrected,’ the letter says.

‘Merely verbal or symbolic reactions from Berlin to Russian [aggression] will, as in the past, only tempt the Kremlin into further escapades.

‘As a key country of the EU, NATO and the Western community of values, Germany has a special responsibility.’

In the face of mounting criticism, Scholz on Tuesday signalled he would be willing to sanction the pipeline as a way to punish Russia – though again refused to take a clear position on the issue.

Responding to a question from reporters after a meeting with NATO head Jens Stoltenburg, Scholz it was ‘clear that… everything will have to be discussed should there be a military intervention in Ukraine’. 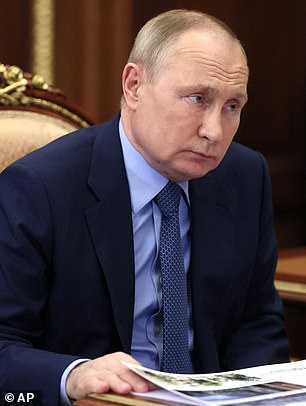 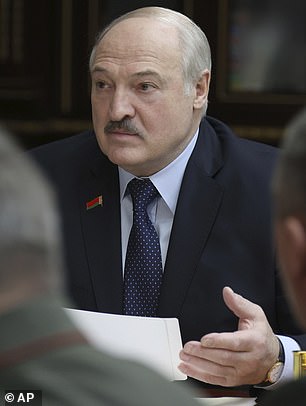 Putin has justified the war games because of alleged Nato interference in Poland and the Baltic states which he says threatens Russia (right, ally Lukashenko who is also hosting war games)

The SDP have historically been closer to Russia than other German parties, and Berlin is under pressure to find a way to fill its energy gap as it withdraws from coal and nuclear power production and becomes more green.

Opponents of Nord Stream 2, including Ukraine and the United States, say it will make Europe too dependent on Russia for energy supplies.

The fate of the project could ultimately be out of Germany’s hands as it is subject to the approval of European Union regulators.

The EU’s foreign policy chief, Josep Borrell, said last week that approval was tied to any potential conflict with Russia over Ukraine.

Stoltenberg said he had invited NATO allies and Russia to a further series of meetings at the NATO-Russia Council to discuss ways to improve the security situation, after an inconclusive first round of talks in two years last week.

‘NATO’s allies are prepared to discuss concrete proposals on how to reduce risks and enhance transparency regarding military activities and how to reduce space and cyber threats,’ he told a joint news conference with Scholz.

‘We are also prepared to resume the exchange of briefings on exercises and our respective nuclear policies.’

Russia denies plans to attack Ukraine. But Moscow says it could take unspecified military action if its demands – including a promise by the NATO alliance never to admit Kyiv – are not met.

German Foreign Minister Annalena Baerbock said earlier on Tuesday during a visit to see Russian Foreign Minister Sergei Lavrov in Moscow that it was difficult not to assess Russia’s military build-up near Ukraine’s borders as ‘a threat.’

Lavrov suggested Nord Stream 2 would add to both German and European energy security, saying Moscow ‘drew the attention of our German colleagues to the counter-productiveness of attempts to politicise this project.’

Markets anticipate a complex recovery in 2022

Markets anticipate a complex recovery in 2022