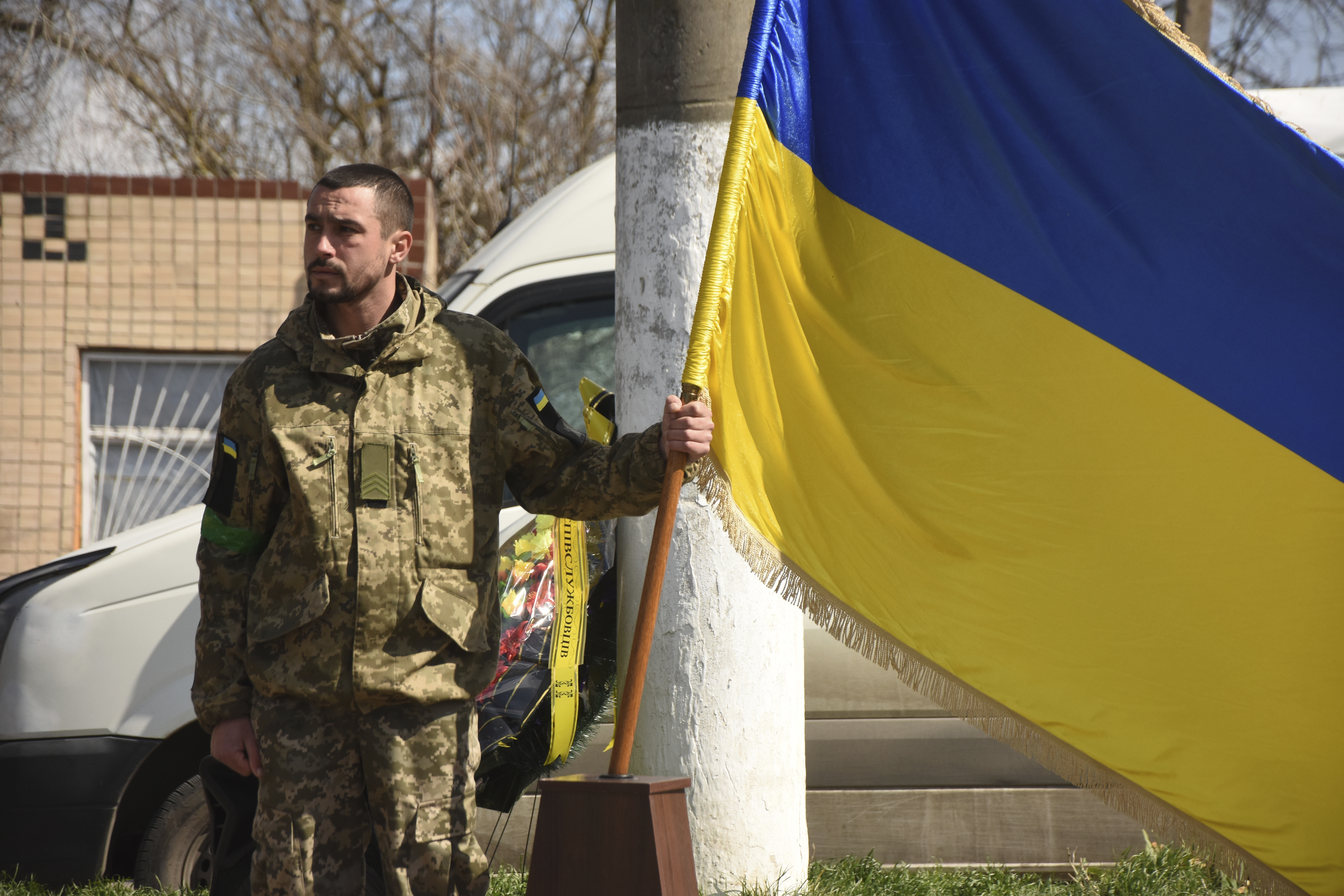 Russia faced no military resistance annexing Ukraine’s Crimean peninsula after it invaded in 2014. And when the Kremlin grabbed a large chunk of the Donbas region via proxies, for many months, there was only a disorganized military challenge from Kyiv.

With the most recent invasion, however, it has been a different story — and not only because of the flow of military supplies from overseas, Western tactical training and combat experience gained over eight years of low-intensity warfare in eastern Ukraine.

All that has been important. But the crucial difference has been the obdurate Ukrainian refusal to quit or be intimidated, even when outgunned and outmanned.

No matter whether they are in the towns northwest and east of Kyiv, or in Kharkiv — the country’s second largest city, which has come under relentless bombardment — or in the southern seaport of Mariupol, where around 3,000 defenders have remained holed up in a cavernous steelworks, Ukrainians are refusing to give up.

In Mykolaiv near the Black Sea, Ukraine’s military has resisted successive waves of Russian attacks, and despite nightly shelling, managed to push the attackers back toward the city of Kherson, where they have faced surly, protesting locals.

For Moscow, there have been plenty of frustrations and reversals on the Ukrainian battlefield, but it is a stoical resistance and fortitude that has allowed all of this to happen — upending the Russian plan to roll quickly into Kyiv or seize the country’s Black Sea rim. It is also disrupting the Kremlin’s plans for an offensive in eastern Ukraine to establish a land corridor between Moscow’s breakaway republics of Donetsk and Luhansk with Russian-controlled Crimea.

Few Western military strategists had calculated Ukraine would be able to hold out for more than just a few days in the face of a full-bore Russian attack. And judging by what Russian prisoners of war have been telling their Ukrainian captors, neither did the Kremlin.

“We are showing the whole world we are a nation, one capable of uniting, capable of fighting; and every single day since February 24, we have been proving we are something that Putin says doesn’t exist — a political nation,” states Ivanna Klympush-Tsintsadze, a former Ukrainian deputy prime minister and now opposition lawmaker.

“Putin says our nation hasn’t the right to exist and that we are little Russians: But here we are, neither new Russians or little Russians; but Ukrainians,” she adds.

“We are reclaiming our history,” she says.

Ask almost any Ukrainian whether the war is changing the country, and if so, how, and they will invariably reply that it is a collective experience, which has brought people together, helped overcome ethnic and regional differences and is fashioning a new national consciousness — one that is empowering Ukrainians to resist Russia but also to lambast Western powers for not doing enough to fight for liberal values.

“I have never seen my country so united,” exults Anna Mosinian from Odesa, Ukraine’s third most populous city and a major seaport, which may well have escaped a Russian assault thanks to Mariupol’s stubborn resistance.

A ship’s purser before the invasion, Mosinian says that while the 2014 Maidan uprising, which toppled Russian President Vladimir Putin’s ally Viktor Yanukovych, exacerbated deep-rooted divisions between Ukrainian-speakers in western and central Ukraine and Russian-speakers in the south and east — including her city of Odesa — the war has done much to shape a new national pride.

The Russian-speakers among her friends and family never thought Moscow would invade in the first place. They expected Putin would be satisfied with a bigger land grab in the eastern Donbas region. When the invasion came, and civilian infrastructure was targeted and towns and villages left in smoldering ruins, they were shocked. In disgust, many Russian-speakers have been switching to Ukrainian as a form of personal protest.

“It is the predominantly Russian-speaking cities and towns that are suffering the most — Kharkiv, Melitopol, Mariupol, Luhansk — that are feeling the full impact,” says Yaroslav Azhnyuk, an entrepreneur and co-founder of Ukrainian startup Petcube. “A few years ago, it would be relatively rare to hear the Ukrainian language spoken on their streets. And now, in those towns citizens are coming out and protesting and singing in Ukrainian and speaking in Ukrainian. I bet those cities never heard as much Ukrainian spoken as now.”

While there was some initial skepticism about the first reports of Russian soldiers raping and murdering civilians in the towns and villages north of Kyiv, those doubts have since disappeared, and been replaced by cold fury.

“There is no man who has done more to establish the Ukrainian nation than Putin,” Azhnyuk says. “Previously, the people of eastern Ukraine couldn’t understand us in western Ukraine, and why we hated Russia for all the atrocities of the Second World War. Now they understand,” he adds.

According to Azhnyuk, the war is making Ukrainians more confident about who and what they are, and what their place should be in a post-war world. “Ukrainians have united around a geopolitical view — this is a war about a civilizational choice between freedom and authoritarianism,” he says.

“The war has definitely changed Ukraine,” says Mykolay Danylevych, a priest in the Ukrainian Orthodox Church-Moscow Patriarchate, an autonomous church that’s a subordinate of the Russian Orthodox Church. “This is a national war, and when it is over, there will definitely be a new Ukraine in terms of identity and the society’s shape,” he adds.

The reshaping of Ukrainian society is already playing out between Ukraine’s two rival Orthodox churches. Since the invasion, more than 150 parishes have defected from the Ukrainian Orthodox Church-Moscow Patriarchate to the smaller Kyiv-based Orthodox Church of Ukraine. The defections are in reaction to the weekly broadcasts by Patriarch Kirill, the head of the Russian Orthodox Church, justifying Putin’s invasion and depicting the war as an apocalyptic battle against evil forces determined to break the God-given unity of Holy Russia.

Danylevych expects there will be more defections, but he also suspects there could be an even bigger religious and cultural schism, saying there’s a possibility the Ukrainian Orthodox Church could “loosen its connection, or maybe even break it altogether, with the Moscow Patriarchate and become independent.”

“Priests and bishops are talking about this; the tendency is in this direction,” he says.

There are risks, though, if Ukraine rejects all things Russian, Danylevych cautions. Because of its tangled history, the Russian language and culture are also part of Ukrainian identity, he says. Adding, “When the war is over, we all should draw conclusions about our lives before the war and learn from our mistakes. And the government will have a unique opportunity. [Ukraine’s President Volodymyr] Zelenskyy said, before the war, there are no right Ukrainians or wrong Ukrainians; we are all Ukrainians; and he needs to maintain that message after the war.”

There is some way to go before then, and in the coming months, there may well be an even heavier price to pay than has already been extracted for the refusal to give up. The Russian offensive now taking shape in Donbas is being commanded by Aleksandr Dvornikov — the general who oversaw Russia’s razing of Chechnya’s Grozny and Syria’s Aleppo.

Ukraine’s strengthened sense of nationhood has been shaped on the anvil of war — but the blows to come will likely test its resilience even more.

5 Reasons Why Children Should Go to Summer Camps