Daily coronavirus infections in the UK have spiked by 50 per cent again as health chiefs recorded another 25,161 cases in the last 24 hours.

Covid-19 deaths have also risen 14 per cent week-on-week, with 612 new victims reported today compared to 533 a week ago.

Today’s cases are the highest since November 14, when England was in full lockdown, and mark a 51 per cent jump on the 16,578 figure last Wednesday.

It’s the second day in a row that daily infections spiked by more than 50 per cent after 18,450 positive tests were announced yesterday, up from 12,282 last Tuesday.

The seven-day average number of daily cases – considered a more accurate indicator because it accounts for day-to-day fluctuations – is nearly 21,000, the highest in more than three weeks.

The worrying trend in the figures came as Britons were warned Christmas mixing will lead to more coronavirus deaths in the new year.

England’s chief medical officer Chris Whitty delivered the stark warning tonight as the as he declared ‘this is not a moment to relax at all’ – though officials say people who have get-togethers won’t be punished.

Professor Whitty likened the situation to driving at 70mph on an icy road – saying that while it was legal, it was not ‘sensible’. 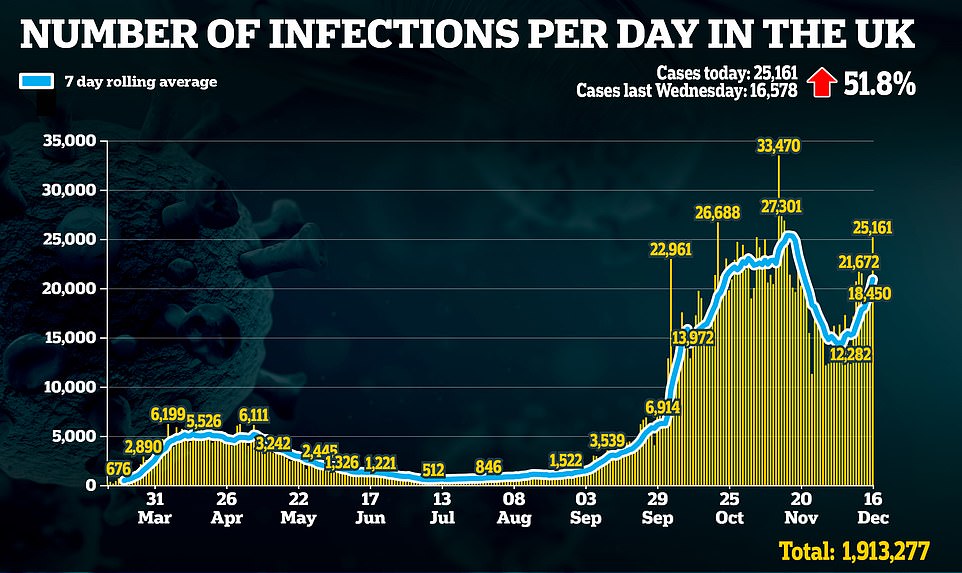 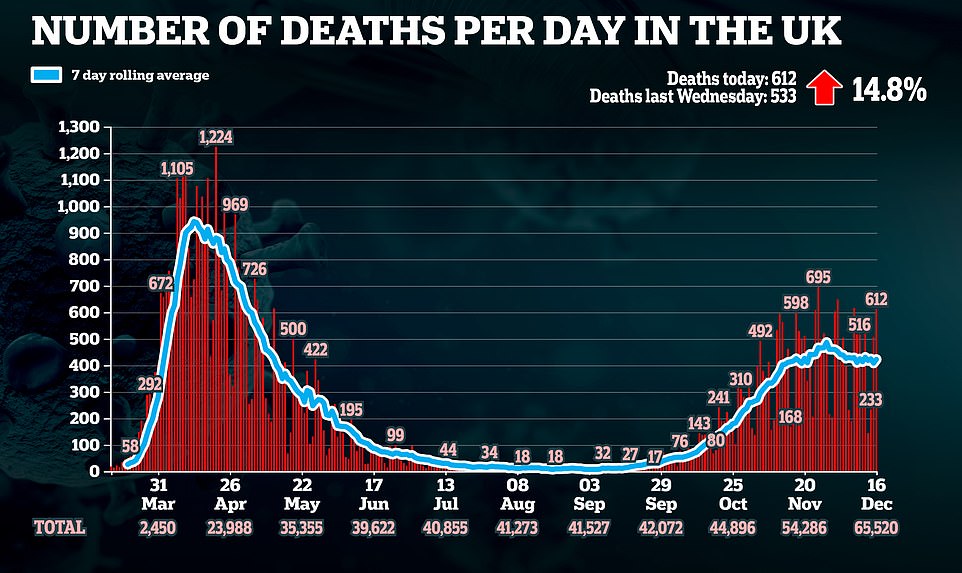 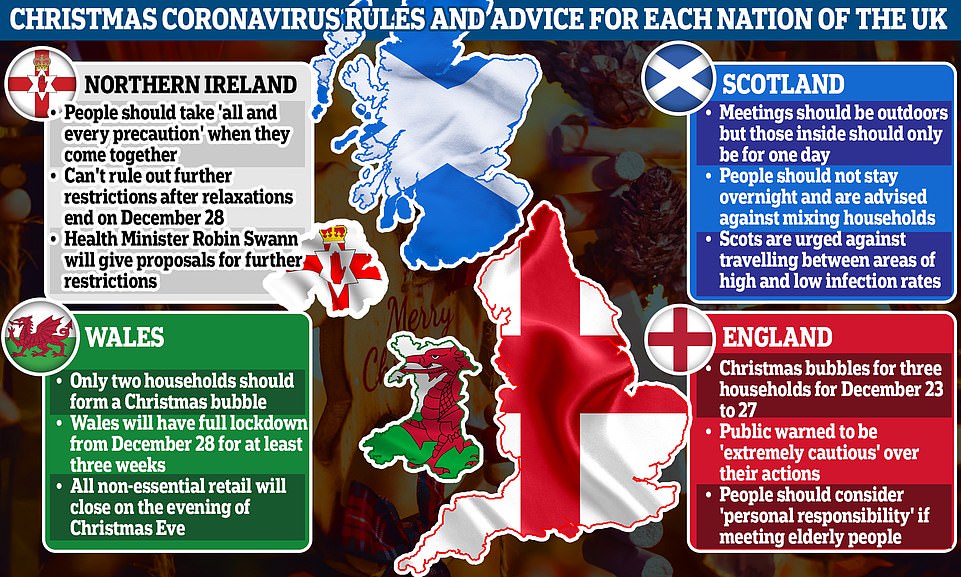 Mr Johnson urged Britons to have a ‘merry little Christmas’ with the emphasis on ‘little’, as he denied that the plan for UK-wide bubbles is descending into chaos. The PM said all the home nations were sending the ‘same message’ that ‘smaller is safer’.

He warned that the coronavirus case numbers were much higher than hoped when the festive easing had been designed – but insisted the law would be kept the same to avoid ‘criminalising’ families who were desperate to see each other.

The PM said the permission for three households to mix over five days was a ‘maximum’, advised people to decide their bubbles by Friday and isolate beforehand if possible, as well as avoiding elderly relatives. He also cautioned against travelling from high infection areas to lower ones, staying overnight with family, and flocking to high street sales on Boxing Day.

Quoting the classic festive tune, Mr Johnson said: ‘Have yourself a merry little Christmas but this year, alas, preferably a very little Christmas.’ But the united front across the UK was in tatters tonight as Wales announced that it will change the law to say only two households can mix between December 23 and 27 – as opposed to three in England.

Professor Whitty bluntly stated that the virus will kill more Britons due to the looser rules and likened the situation to driving at 70mph on an icy road – saying that while it was legal, it was not ‘sensible’. He struck a sombre tone alongside the PM 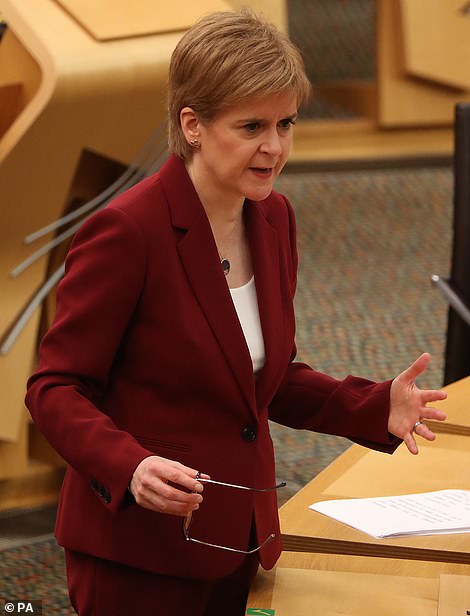 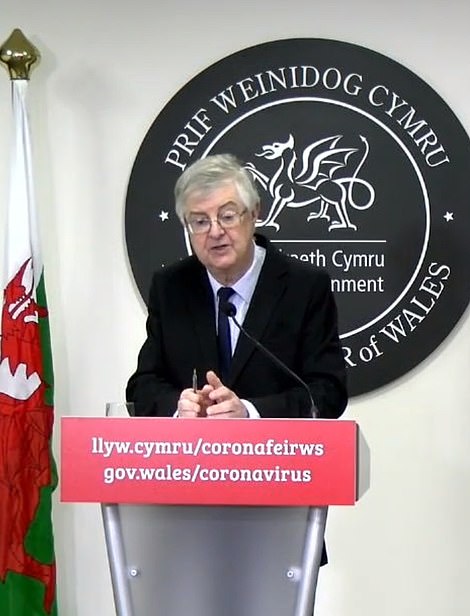 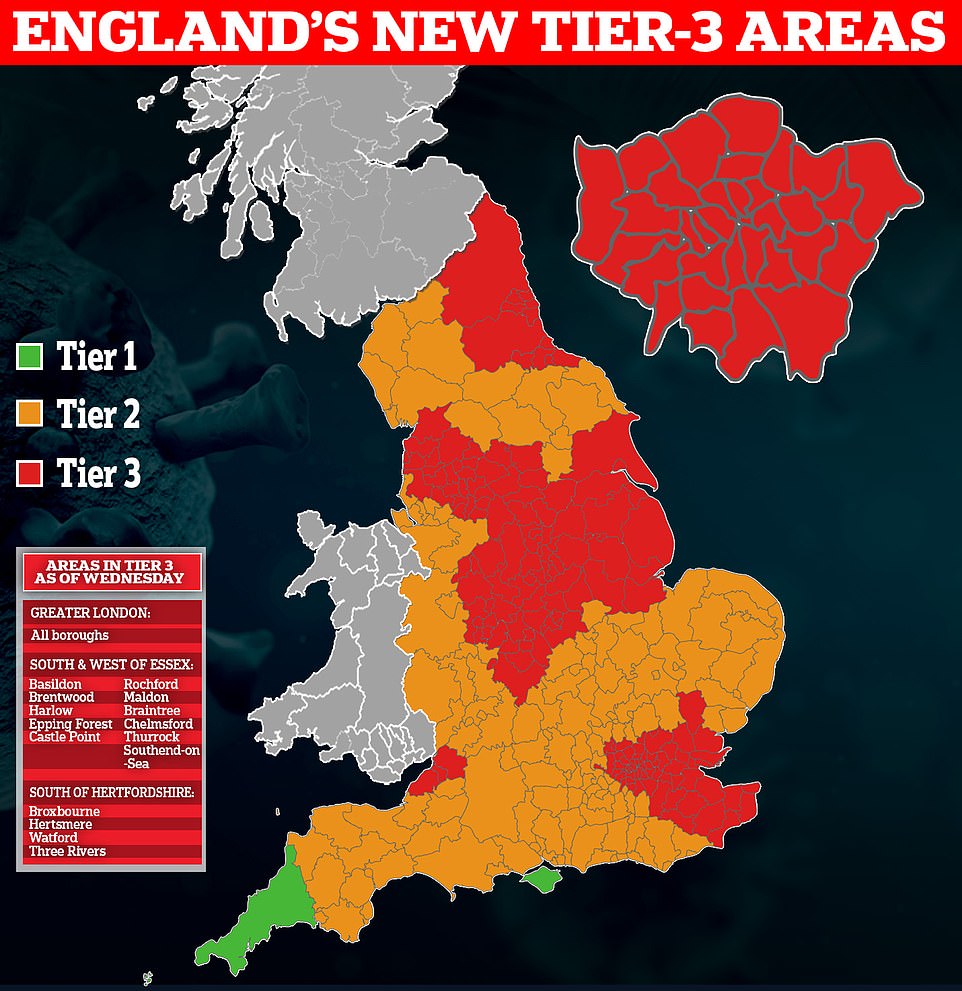 Meanwhile, Nicola Sturgeon said gatherings should only happen on one day, people should not stay overnight unless ‘unavoidable’, and pleaded with Scots who have not already organised a bubble to avoid doing so. In bruising clashes with Sir Keir Starmer at PMQs earlier, the Labour leader accused Mr Johnson of ignoring scientists’ advice on Christmas.

But he shot back by accusing Sir Keir of not having the ‘guts’ to come out explicitly in favour of cancelling the easing. The latest round of talks between Michael Gove, Nicola Sturgeon, Mark Drakeford of Wales and Northern Ireland’s Arlene Foster took place this morning.

No10 had been braced for Scotland to take a tougher line, after Ms Sturgeon said that she would not hesitate to break ranks – suggesting the length of the relaxation and the three-household limit might need to be reduced.

Majority of Britons believe Christmas SHOULD be cancelled, poll finds

The majority of Britons believe Christmas should be cancelled this year amid plans to loosen restrictions over the festive period, a poll has found.

A YouGov poll of 3,856 adults found 57 per cent think the current rules should be maintained over Christmas – instead of allowing bubbles of up to three households to mix.

Tory MPs are increasingly nervous about the UK-wide proposals, after respected medical journals the BMJ and HSJ warned the ‘rash’ move will ‘cost lives’ and must be axed.

And the British public appear to agree – as just 31 per cent said they wanted the plan for ‘bubbles’ to go ahead. Separate Ipsos MORI research found 49 per cent thought the rules were not strict enough.

The Government’s Christmas travel tsar Sir Peter Hendy told the Transport Select Committee this morning that people should ‘be careful’, ‘stay local’, and ‘book public transport early’. But he suggested that three-quarters of the public are not intending to travel, and predicted there will not be nightmare scenes.

Mr Johnson said it would have been ‘frankly inhuman’ to ‘ban Christmas’ altogether – pointing out that the current restrictions on civil liberties might be the most severe since Cromwell’s time.

Referencing days of wrangling between the UK nations over the Christmas bubbles, he said: ‘We’ve decided that the overall situation is alas worse, more challenging than we hoped when we first set the rules.

‘While it would not be right to criminalise people who made plans and simply want to spend time with their loved ones, we’re collectively, across the UK, governments at every level, asking you to think hard and in detail about the days ahead.

‘When we say three households can meet on five days I want to stress these are maximums and not targets to aim for.

‘If possible don’t travel from a high prevalence to a lower prevalence area and avoid staying away from home overnight if you can.’

He went on: ‘Whatever your plans for Christmas, please think carefully about avoiding crowds in the Boxing Day sales.

‘And no one should be gathering in large groups to see in the New Year.’

He added: ‘If you have an elderly relative you might want to delay seeing them until they have been vaccinated.’

At her daily briefing, Ms Sturgeon urged Scots to stay in their own homes if they can, rather than visiting relatives. She said those who have yet to fix a bubble to be in, should not form one now.

In her daily briefing she said: ‘The safest way to spend Christmas this year for you and those you love is to stay in your own household and your own home. 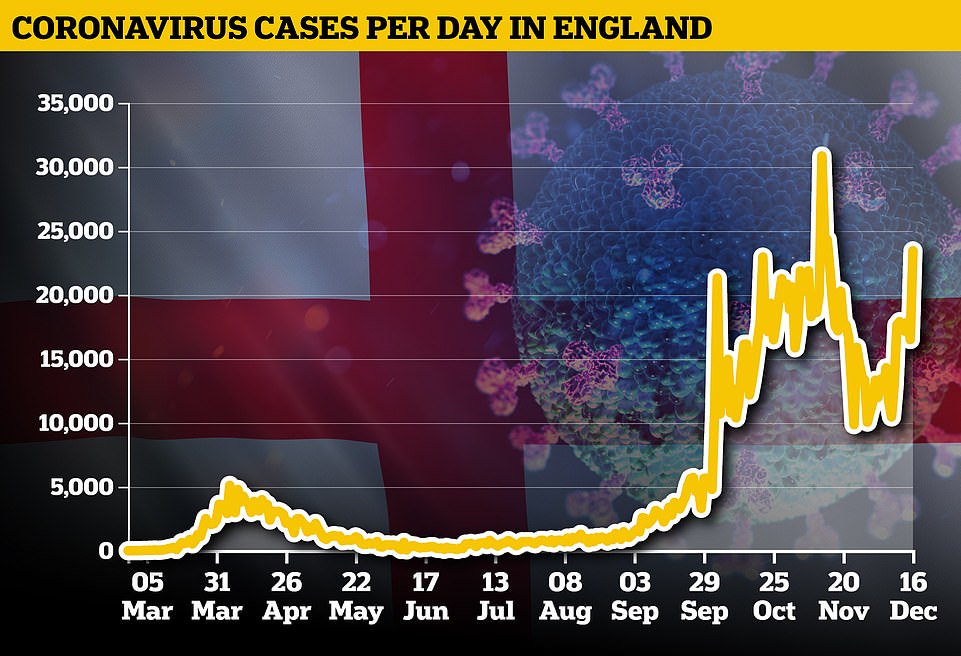 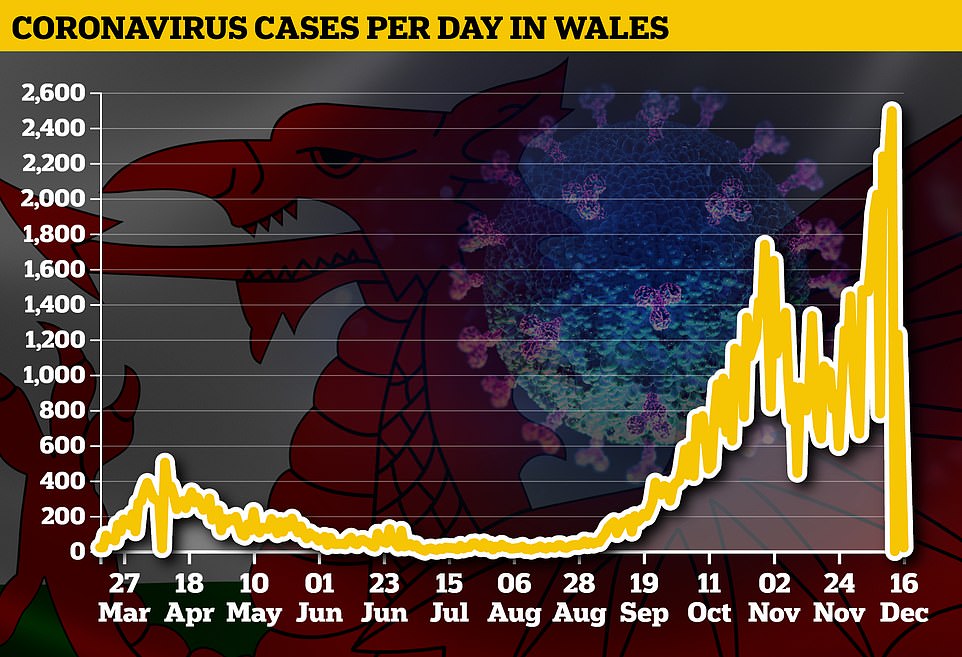 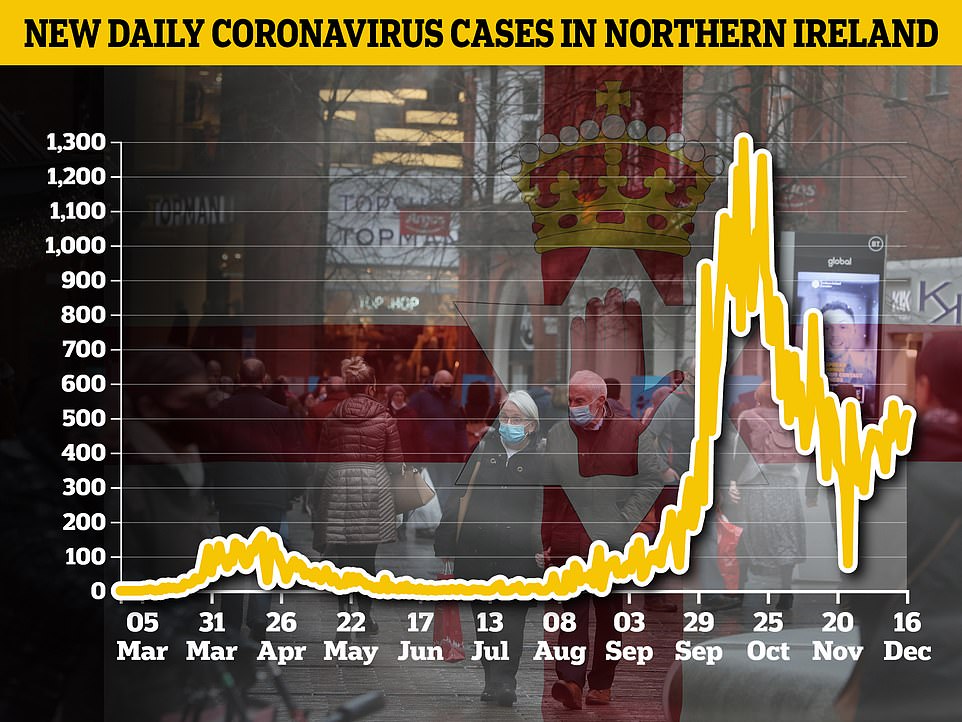 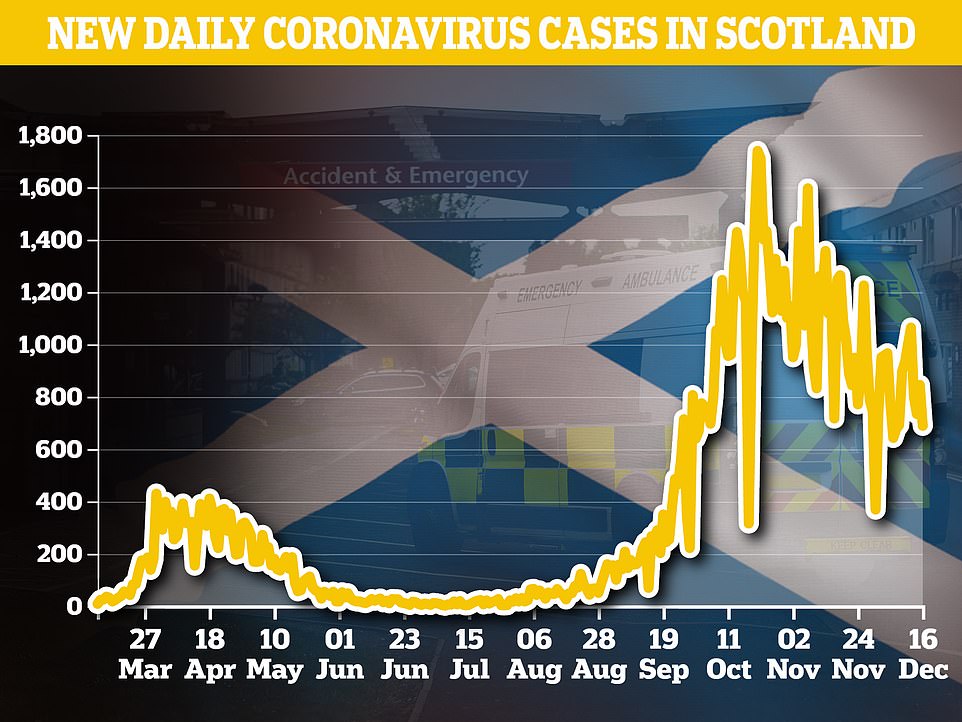 Coronavirus cases recorded in Scotland, England, Wales and Northern Ireland between March and December are seen above. No update was provided for Wales on Sunday due to planned maintenance of the NHS Welsh Laboratory Information Management System

‘My strong recommendation is that this is what you should do if at all possible.

‘Any interaction you do have with another household should if at all possible be outdoors, but if you do consider it essential indoors with someone from another household you should limit both the duration and numbers as much as possible.

‘The five-day relaxation is a window of opportunity during which you can meet, it is not a period that we think it is safe or sensible to get together for. You should see it as a maximum, not a target.

‘My recommendation is that if you do form a bubble you should not meet up with people in it any more than on one day over that period, if possible, and you should not stay overnight unless it is unavoidable.

‘You should also limit numbers as far as possible, three households is a maximum that tries to account for the fact that families come in all shapes and sizes, but two would be better. 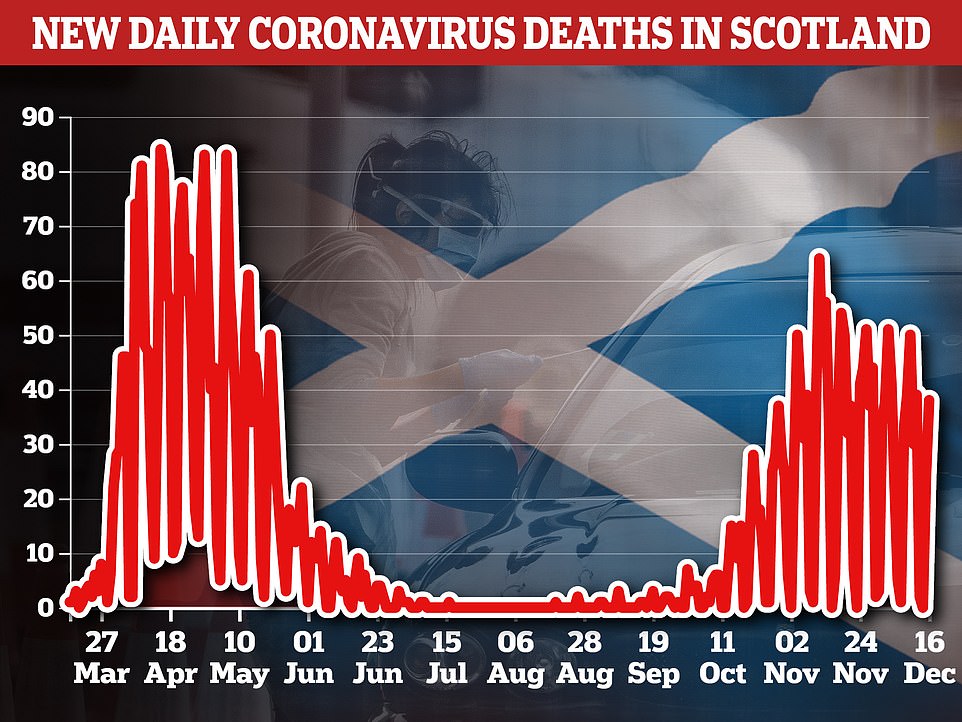 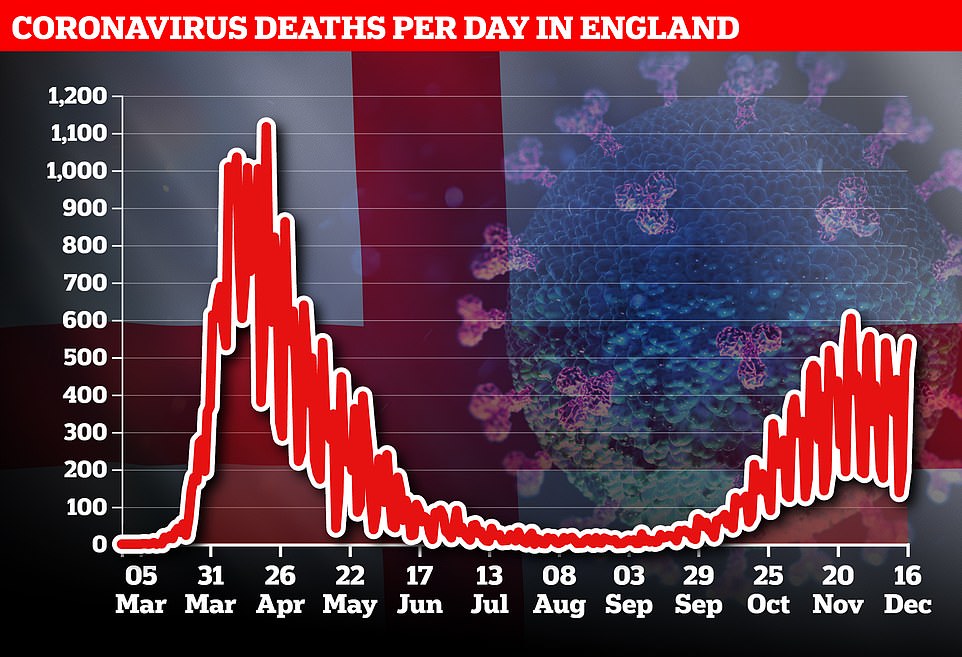 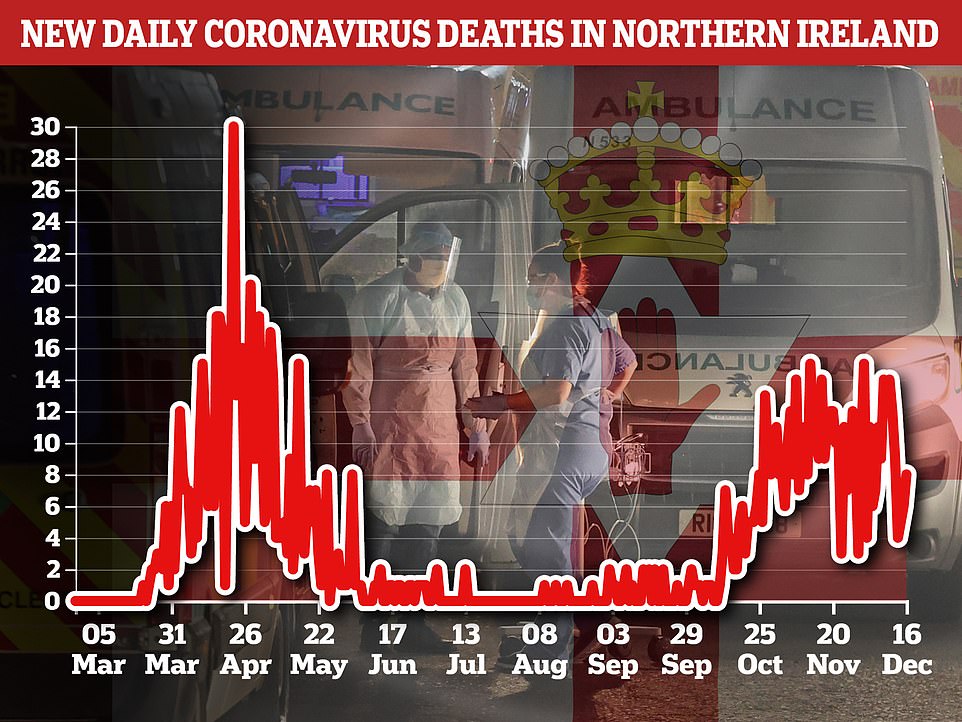 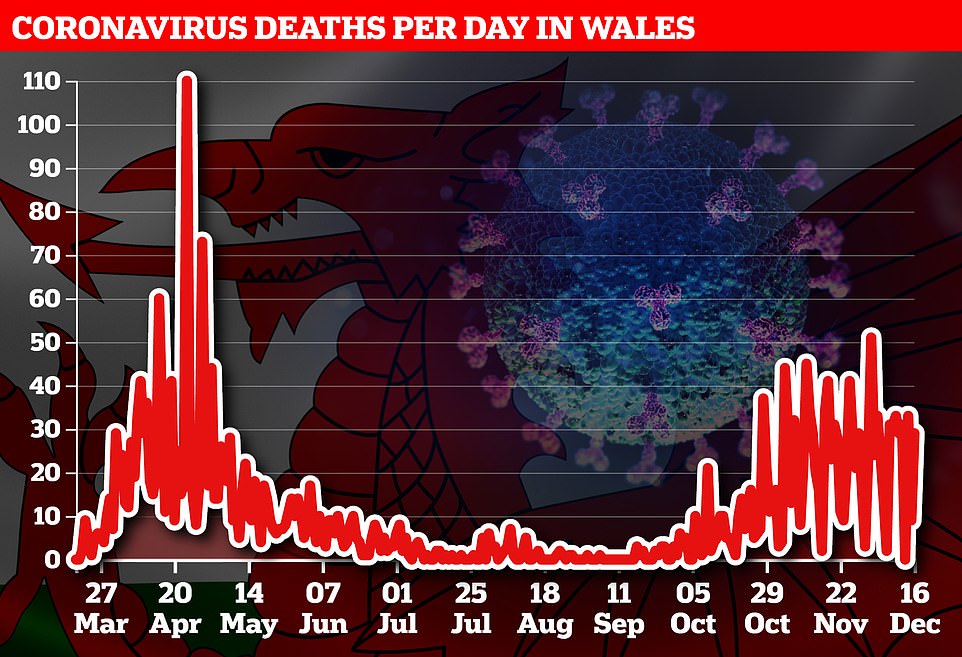 Coronavirus deaths recorded in Scotland, England, Wales and Northern Ireland between March and December are seen above

‘In short if you have to form a bubble keep it as small as possible.’

Mr Drakeford told the Welsh Government briefing: ‘Here in Wales, the position is that only two households should come together to form an exclusive Christmas bubble during the five-day period.

‘The fewer people we mix with in our homes, the less chance we have of catching or spreading the virus.

‘None of us wants to be ill this Christmas. And we don’t want to give coronavirus to our close family or friends.

‘The Chief Medical Officer for Wales has provided special advice for people who were previously shielding about mixing over Christmas.’

Mr Drakeford also announced swingeing restrictions outside of the bubbles, with all non-essential retail, including close contact services and all leisure and fitness centres, ordered to close at the end of trading on Christmas Eve. All hospitality premises will close from 6pm on Christmas Day.

A full ‘Level 4’ lockdown will then come into force from December 28 – after the bubbles legally expire – with blocks on household mixing, holiday accommodation and travel.