UK’s daily Covid infections rise 40% in a week to 3,383 amid Indian variant outbreak


Britain’s daily coronavirus infections today rose 40 per cent in a week after 3,383 cases were recorded amid a growing outbreak of the Indian variant, but only one death was registered.

Daily cases have been steadily climbing for the past fortnight, a trend which is being driven by the super-infectious strain. The seven-day average number of infections now sits at 3,345 after rising 28 per cent in the last week.

But the fact deaths have not yet followed suit will give ministers confidence the jabs are highly effective at preventing severe disease.

The latest Department of Health figures show some three in four adults have now received at least one dose of the Covid vaccine or 39.3million people, after another 120,243 first doses were dished out yesterday. And as many as 25.5million people, or almost half of all adults, got two doses after 204,282 second jabs were administered.

Small rises in the number of infections and the wide spread of the Indian variant have led to concerns the Government’s roadmap out of lockdown could be delayed beyond June 21.

Environment Minister George Eustice said today that ministers couldn’t ‘rule anything out’ and that a decision would be made in a fortnight’s time when more is known about the effect of the Indian strain — which is making up up to three-quarters of all new infections — on hospital admissions. 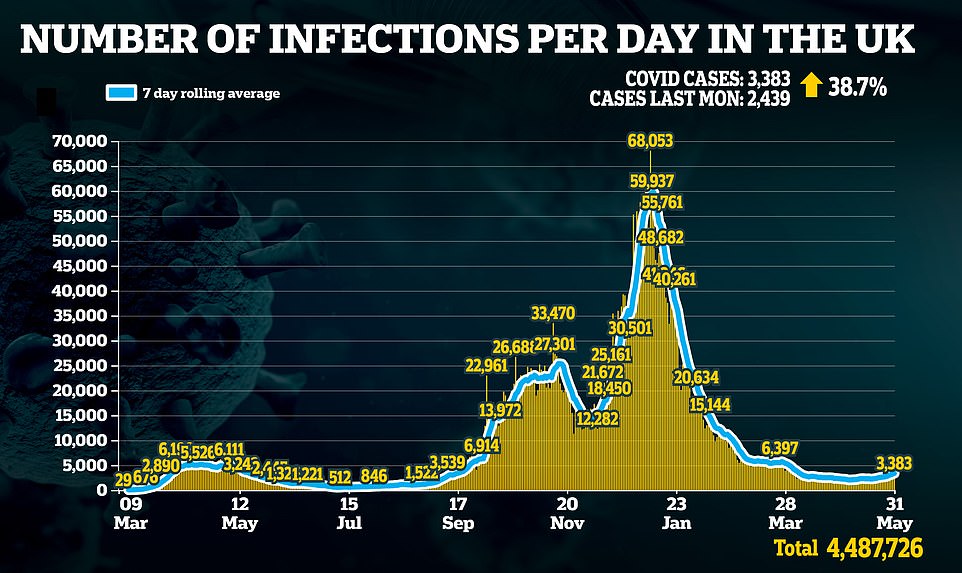 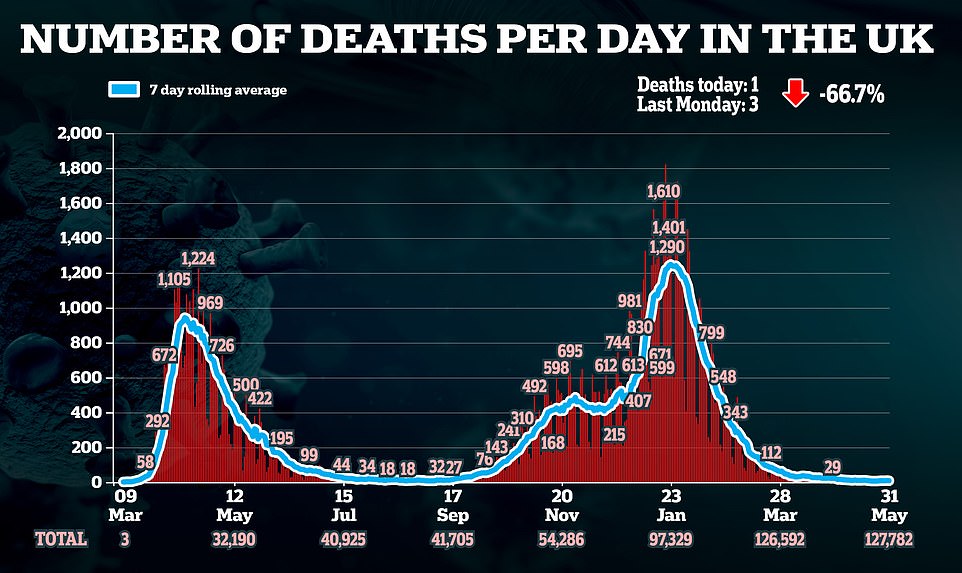 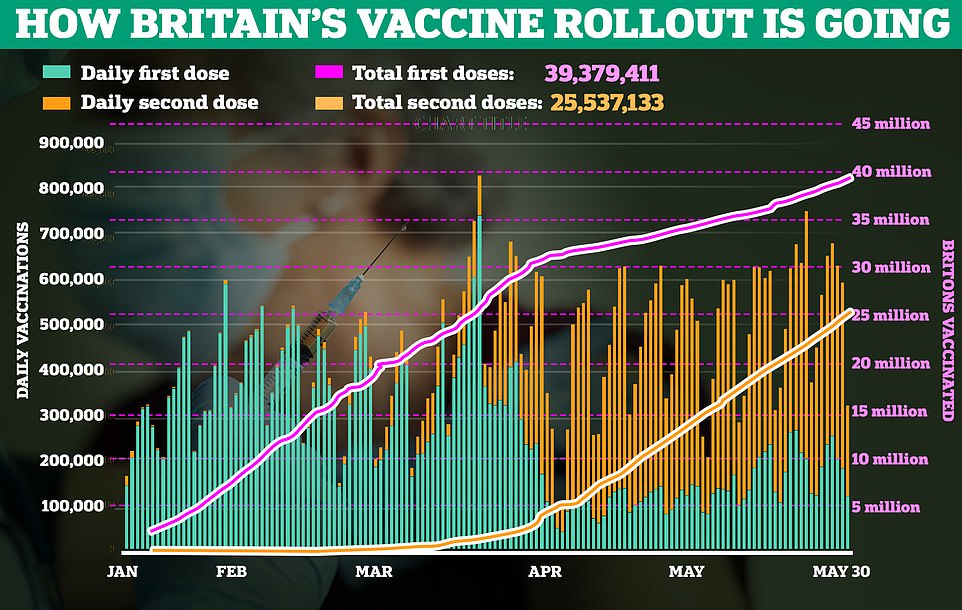 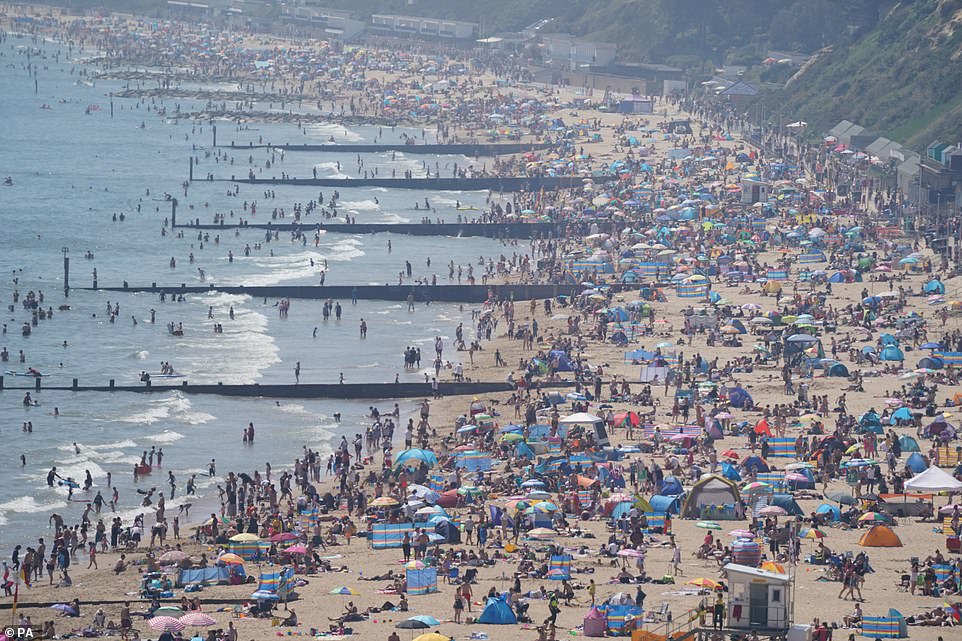 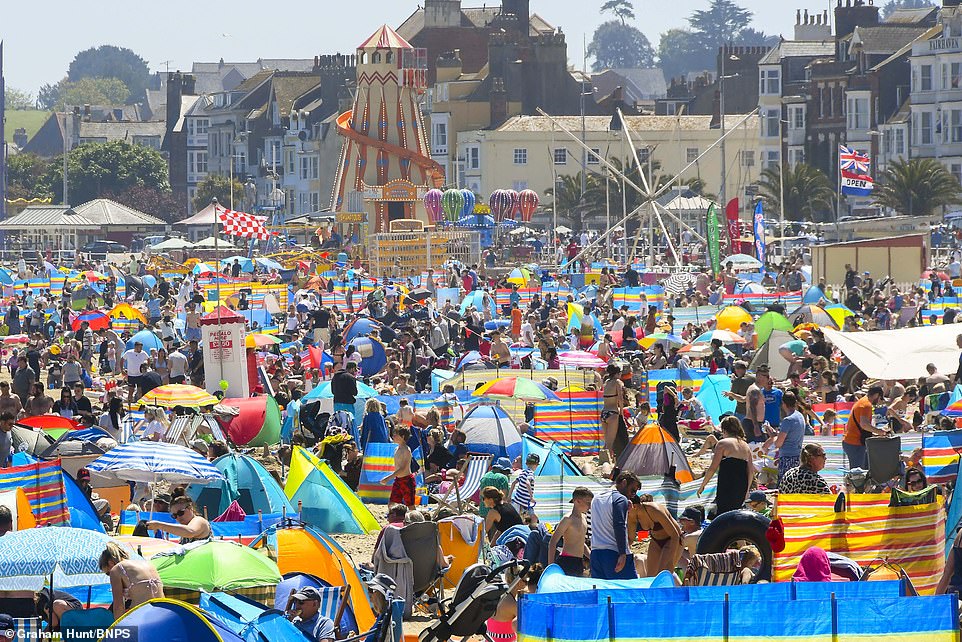 Britons today basked in the hottest day of 2021 so far as bank holiday Monday brought highs of 77F (25C) and two million drivers hit the roads – while scientists warned ‘freedom day’ June 21 is on a ‘knife edge’.

With three weeks to go until all Covid-19 restrictions are due to end, Downing Street sources said the plan was ’50/50′ amid calls by Sage advisers for it to be delayed ‘by a few weeks’ amid rising cases of the Indian variant.

Millions of Britons have enjoyed a hot weekend at beaches and parks, which are now looking mostly back to how they were pre-pandemic, but discussions continue within the Government over whether it can hit the target date.

While people have been able to see their friends indoors, visit the cinema or theatre and hold outdoor gatherings of up to 30 people since May 17, there are still restrictions on event capacities and nightclubs remain closed.

People are now flocking to parks and beaches as they make the most of the turnaround in conditions – with the spell of summer sunshine now expected to last more than two weeks, following the fourth wettest May on record.

Conditions will improve further this week with highs of 81F (27C) by Wednesday, making Britain hotter than Rome which will only reach 77F (25C) – and it follows two days of glorious weather already over the three-day weekend.

This afternoon, the beaches of Lyme Regis, Bournemouth, Brighton, Weymouth and Camber Sands looked particularly busy. It comes after highs of 75.2F (24C) were observed yesterday and 73.2F (22.9C) on Saturday.

In other Covid news:

Mr Eustice told BBC Radio 4’s Today programme: ‘The Prime Minister has said all along that he is going to take this one step at a time and will only make the judgement on the next step, on June 21, about a week before that.

‘The rates are going up again slightly but from a low base and probably to be expected, given there are a significant number of younger people who are now out and mixing but haven’t had the vaccine – I suppose that is to be expected. But the right thing to do in a couple of weeks’ time is to assess that data before deciding what we can do.’

Mr Duncan Smith told MailOnline that the Government appeared to be bowing to pressure from its scientists once again.

‘We listen to scientists far too much at the moment. They seem at times to be bullying the Government,’ he told MailOnline.

‘It’s like the 21st of June that we are heading for and look at them all up over the weekend saying “don’t do it, don’t do it, we must stay locked down”.

‘My worry is that all of this is leading to us having an inability in future to deal with any virus – we are going to be screaming at each other to lockdown.’

Nervtag’s Professor Gupta called for June 21 lockdown easings to be delayed while speaking in a personal capacity on BBC Radio 4’s Today programme.

‘I think the problem is we are not too far from reaching the sort of levels of vaccination that would help us contain the virus,’ he said.

‘I think that people are not saying we should abandon the June 21 date altogether but just to delay it by a few weeks while we gather more intelligence and we can look at the trajectory in a clearer way.’

Asked whether a delay would be necessary, he said: ‘If you look at the costs and benefits of getting it wrong, I think it is heavily in favour of delay, so I think that’s the key thing.

‘Yes, we will learn to live with it but this date that was set did not take into account the fact we would have a new variant on the horizon, with properties that allow it to evade antibodies to some extent and a virus which is more transmissible.’

He added: ‘It will probably take longer than earlier waves to emerge because of the fact that we do have quite high levels of vaccination in the population, so there may be a false sense of security for some time, and that’s our concern.’

Professor Gupta sits on the New and Emerging Respiratory Virus Threats Advisory Group (NERVTAG), which advises No10’s top scientists on the spread of the virus.

The committee recently advised two Covid vaccine doses would be needed to prompt strong protection against the Indian variant of Covid, and calculated whether troublesome mutant strains of the virus are more transmissible.

She said: ‘Everybody’s behaviour could potentially make the difference. So the key thing at the moment is for people to do their socialising outdoors, and if people are inside, make sure windows and doors are open.’

Government restrictions currently permit Britons to invite up to six family, friends or relatives into their homes, or one other household. They make no mention of whether windows and doors should be left open. 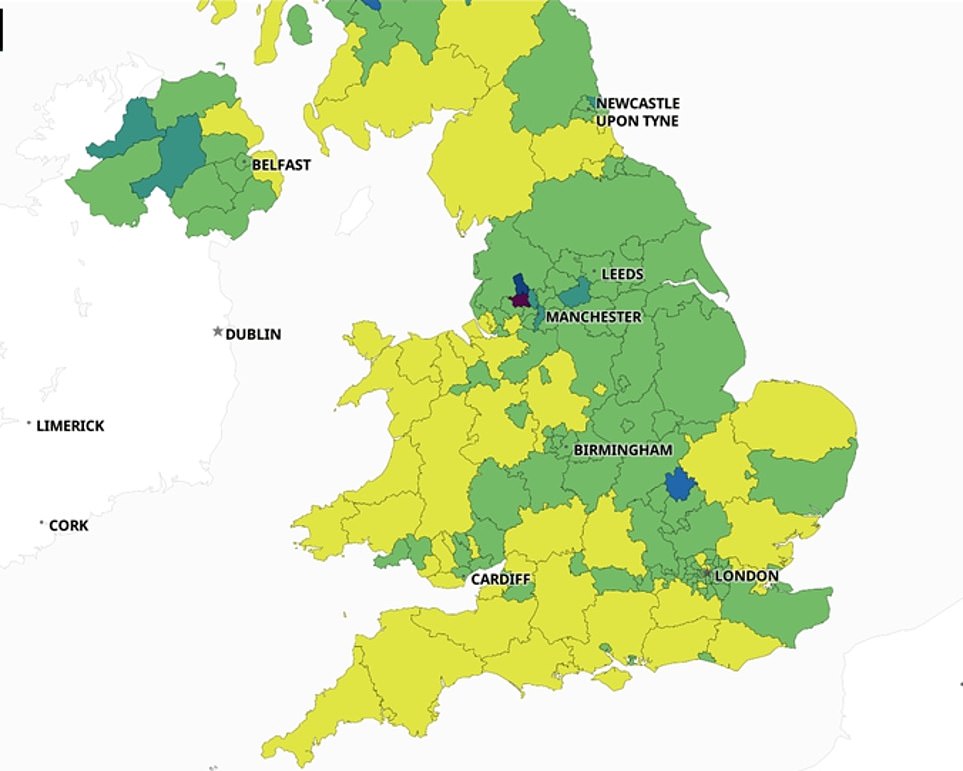 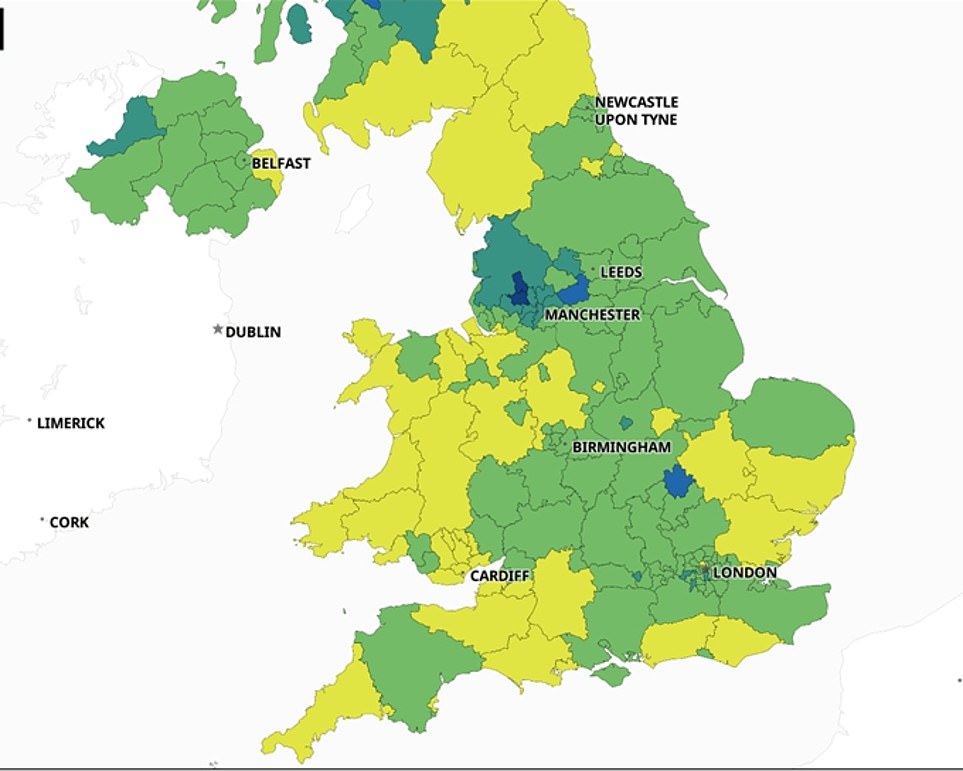 MAY 18 LEFT, MAY 25 RIGHT – DARKER COLOUR INDICATES HIGHER POSITIVE TEST RATE: Department of Health figures show that infection rates are rising in the North West around Manchester, where the Indian variant is being found most often. Bolton, Blackburn, Manchester, Wigan and Kirklees are all among the past of England with the highest rates of positive tests 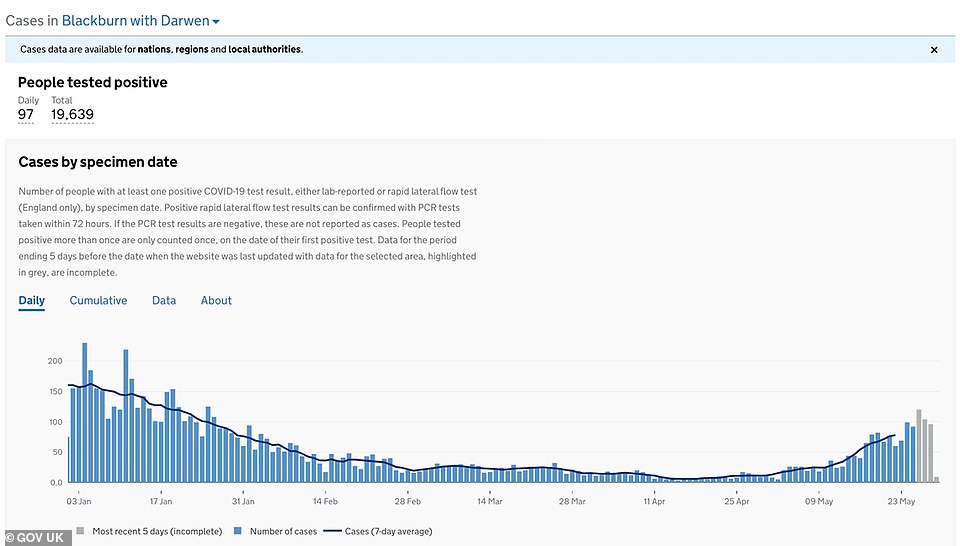 Cases in Blackburn with Darwen, in Lancashire, have clearly been rising towards the end of May and the weekly average is now at the highest level of anywhere in the country 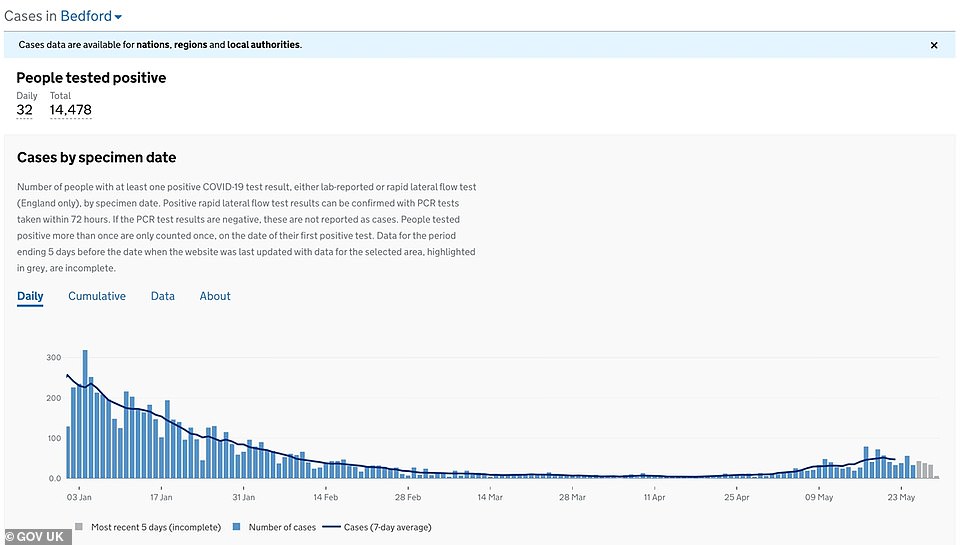 There were signs of a downturn in positive test results in Bedford, which has been one of the country’s Indian variant hotspots 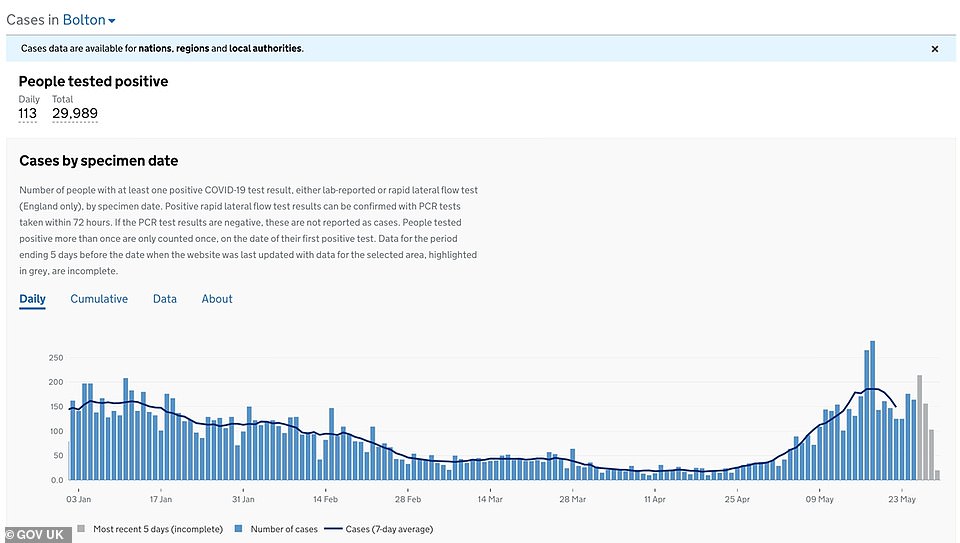 Cases have clearly dropped off in Bolton after peaking in mid-May, showing that efforts at mass vaccination and surge testing appear to have helped to keep the Indian variant under control even without lockdown

A mass Covid vaccination event at Twickenham Stadium will jab as many as 15,000 people today.

It is hoped the push will give locals their first dose of the vaccine without delay of having to book or wait.

The initiative comes as the spread of the Indian variant of coronavirus threatens plans to reopen the country on June 21.

The Twickenham jabbing day was dreamt up by a partnership of the local NHS and Hounslow Council with support from England RFU.

It is in the West London borough of Richmond upon Thames but close to Hounslow, which is currently having surge testing due to increased variant cases.

Separate figures today showed Bolton and Bedford appeared to have got the Indian variant under control and stemmed the tide of rising cases — but hotspot Blackburn with Darwen now has the worst case rate in the UK.

Department of Health data show that Blackburn, which has the second highest rate of Indian variant cases, now has the most infections per person of any local authority in the country after a 70 per cent spike in a week.

Positive tests also appear to have turned a corner in Bedford, where there are signs they have declined in recent days after peaking in the third week of May.

The UK’s fate will hang on data that comes out over the next fortnight showing how much of an impact the new variant is really having and how easy it is to control.

Bolton’s relegation from the worst-hit area in England should also raise hopes that surge testing and vaccinations helped to keep even the super-infectious Indian variant under control without a lockdown, although it remains to be seen whether cases will keep coming down.

At the start of May the council opened more swab-testing sites and offered them to everyone without symptoms in at-risk areas, as well as going door-to-door.

Officials also became more liberal with vaccines, dishing them out to adults of all ages, and stepping up campaigns to have more unvaccinated adults come forward for jabs.

The town gave out thousands of vaccine doses per day throughout the month and the number of people getting tested each day spiked from fewer than 7,000 at the start of the month to more than 20,000 a day within weeks in a population of 200,000 people.

As a result the daily average infection rate – of which 91 per cent of cases are the Indian variant – has fallen from a peak of 453 per 100,000 people to 362 and it appears to still be coming down.

The town’s Covid vaccine rollout chief, Dr Helen Wall, said on BBC Breakfast: ‘I’m pleased to report that things are starting to slow down in terms of the rise here in Covid cases, but we really can’t rest on that. It’s only been a few days of the rates slowing down so we really are keen to keep pushing forwards and get the rates down further.’

Blackburn with Darwen has now taken its place as the worst-hit part of the country, with a spike there being driven by the Indian variant which accounts for at least 95 per cent of all cases.

The director of public health at the council said young people were driving up infections. Dominic Harrison said in a tweet: ‘[Blackburn with Darwen] rates for 15-19s is raised because of 17-18yo rate of over 1,050/100,000. I think young adults are struggling most at the moment – we need 12-18 vaccination prioritised in high transmission areas as soon as judged safe/effective.’

The clock in the top-left corner had not even appeared on our television screens when Scotland...