Unlicensed learner driver, 35, is caught speeding at 200km/h with his three children in the car


Unlicensed learner driver, 35, is ‘caught driving at 200km/h’ during a high-speed police chase with his three children in the car – and one is just seven months old

An unlicensed learner driver has been charged after he was allegedly caught speeding at 200km/h with his three young children in the car.

The driver allegedly failed to stop when directed and a pursuit was initiated along the motorway, reaching speeds of up to 200km/h in a signposted 110km/h zone.

A man, 35, has been charged after he was allegedly caught speeding on with his three kids in the car in Sydney’s northwest on Sunday. Pictured: The Holden Commodore

The car was eventually brought to a stop a short time later when it slammed into a concrete barrier.

Police officers say they then discovered a 28-year-old woman, two boys, aged seven months and five years, and a three-year-old girl, sitting inside in the car.

The children were taken to The Children’s Hospital at Westmead to be checked as a precaution, where the girl was treated for bruising. 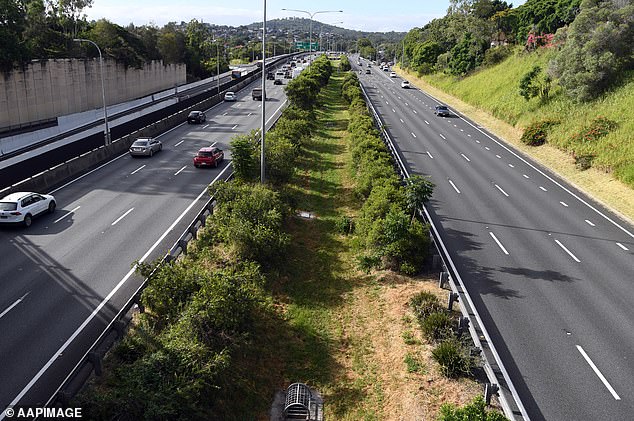 Checks revealed the 35-year-old male driver held an expired learner permit and it was disqualified.

He was arrested and taken to Hornsby Police Station where he was charged with police pursuit – not stop – drive dangerously, drive motor vehicle while disqualified, drive with low-range PCA, and speeding.

NSW Police said a child at risk notification has been made.

'Get out of my house!': Naked intruder breaks into Bel Air mansion and refuses owner's order...

Levin: Don’t be fooled, the Squad is nothing more than a ‘cabal of Marxists who hate this country’