By Adam Barnett For Mailonline

A man in China was detained by police after he was caught throwing coins into a jey’s engine for good luck – a superstition that put the lives of the 148 passengers and crew in danger.

The passenger, identified only as having the surname Wang, was scheduled to fly from Weifang to Haiku on a Beibu Gulf Airlines flight GX8814 when he tossed a handful of coins wrapped in red paper into the engine.

Coins in a plane’s engine can damage the blades or even cause a fire.

Luckily, runway workers noticed the coins on the tarmac under the plane before it took off and alerted the aircraft’s crew. 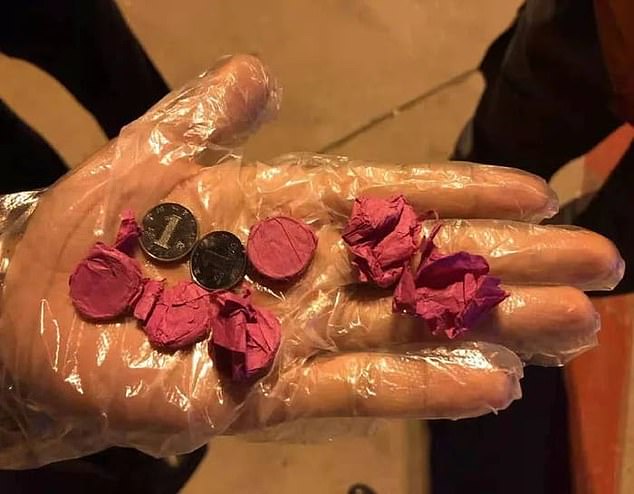 Wang reportedly admitted throwing six coins wrapped in red paper into the plane’s engine. A picture of the coins was later shared online.

The staff managed to recover all the coins but the flight had to be cancelled due to safety concerns. All 148 passengers were forced to disembark and wait for another flight until the next morning.

Wang was then detained by the police.

Many Chinese people believe that tossing coins into a specific target – such as a statue in a park or a bell in a temple – might bring them good luck or ward off evil spirits.

This is not the first time a passenger has attempted to toss coins into an aircraft engine for good fortune and a safe flight in the country. 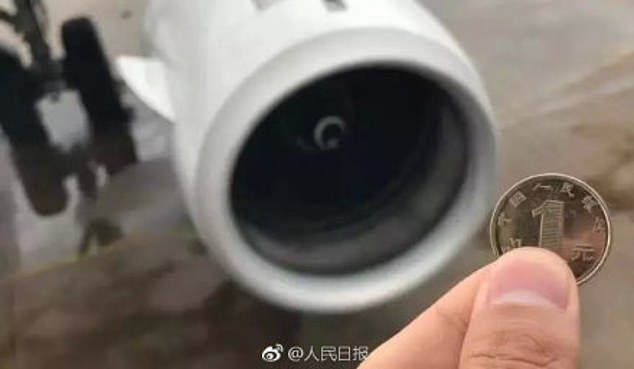 Many Chinese people believe it is good luck to toss a coin into a specific target such as a statue in a park or a bell in a temple.

In 2019 a passenger was ordered to pay Lucky Air more than £13,000 as compensation after throwing two coins at the plane’s engine, causing the flight to be cancelled and more than 160 passengers stuck overnight.

The 28-year-old man, named Lu Chao, was travelling by air for the first time with his wife and son when he tossed the coinage towards the aircraft in eastern China, according to a regional court.

All passengers set to travel with the domestic flight were left stranded at the airport and the carrier had to arrange overnight accommodation for them before they could take a replacement flight the next day, the court said.

Mr Lu was detained by Anqing Public Security Bureau for 10 days before being sued by the airline.

One of the coins was found directly underneath the aircraft and the other was spotted on the ground about one metre (3.3 feet) in front of the plane’s left engine.

The superstitious man was travelling with his wife and one-year-old child and was hoping for a safe journey when he threw the money, Anqing police said in a previous statement.

The court ruled in favour of the airline. It deemed that any normal person with common sense would think that the coins might land in the engines, which could lead to ‘a serious accident’. 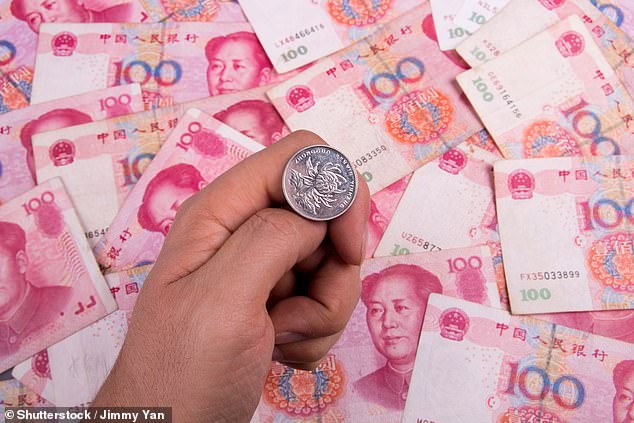 In an earlier case in 2019, a 23-year-old medical graduate threw three coins towards a plane’s engine in hope of helping her nephew get over his diarrhoea at an airport in Sichuan Province.

In April that year, a 66-year-old female passenger was detained by police for throwing six coins at a plane for good luck before take-off in Inner Mongolia.

Those who disrupt the normal operation of companies and organisations are subject to a maximum of 10 days of detention and 500 yuan (£56) cash penalty, according to China’s Public Security Administration Punishment Law.

Unruly and untrustworthy passengers in China may also be blacklisted by the country’s civil aviation authority and banned from taking planes, according to the nation’s social credit system.

Why do Chinese air passengers throw coins at planes? 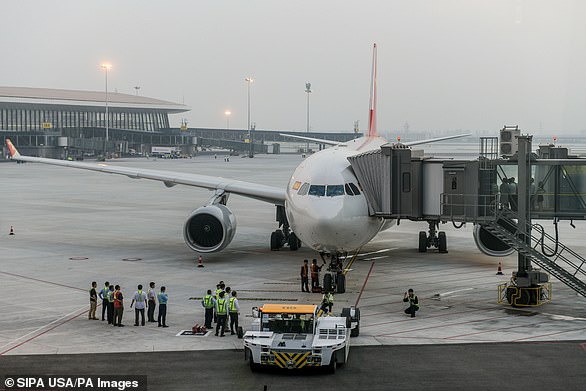 It has been estimated that more than 70 per cent of Chinese – or more than one billion people – have never flown in their life, therefore are oblivious of flight safety regulations

Many Chinese people believe that chucking coins at a specific target could bring them good luck or ward off evil spirits. This could range from a statue in a park to a bell in a temple.

More interestingly, the majority of the nation’s citizens have never travelled by air despite the fact that the country is set to overtake the United States to be the largest air travel market in the world in 2022.

Most air passengers in China are repeated travellers from big cities.

It has been estimated that more than 70 per cent of Chinese – or more than one billion people – have never flown in their life; therefore they are oblivious of the etiquette and safety regulations of travelling by air.

In April, a 66-year-old female passenger was detained by police for throwing six coins at a plane for good luck before take-off in Inner Mongolia, northern China.

A month earlier, two passengers were detained by police in Jinan, eastern China, after tossing dimes at a plane operated by Lucky Air.

The domestic flight was delayed for two hours as a result, affecting 260 passengers.