US diplomats to return to Ukraine this week 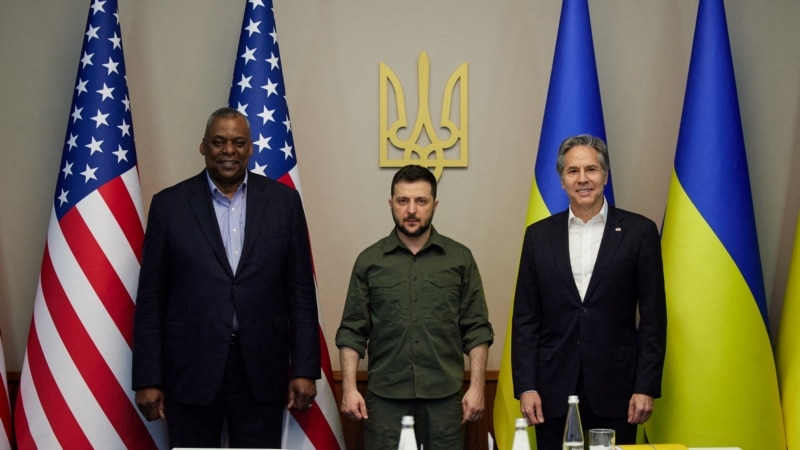 US diplomats will begin returning to Ukraine this week, first to the western city of Lviv and then to the capital kyiv.

The United States is also providing more foreign military funding to Ukraine to help the country obtain more advanced weapons and air defense systems to defend against Russian attacks, according to senior US officials.

US President Joe Biden will formally nominate Bridget Brink, currently Ambassador to the Slovak Republic, as US Ambassador to Ukraine.

“This would be to underline our commitments (to Ukraine). We will seek to return our diplomats to our embassy in kyiv as soon as possible,” a senior State Department official said.

Several member countries of the European Union and NATO are sending their diplomats back to kyiv, including Austria, Belgium, the Czech Republic, France, Italy, Slovakia and Slovenia. The UK government announced on Friday that it will shortly reopen the British embassy in kyiv.

The return of the foreign diplomats is seen as a sign of some semblance of security in Ukraine after nearly two months of bombing and shelling by Russia.

“We intend to commit more than 713 million dollars in foreign military financing,” said the state official. “This includes funds for Ukraine and 15 other allies and partner countries in Central and Eastern Europe, in the Balkans. … And it will provide support for the capabilities that Ukraine needs, especially for the fight in Donbas.”

With the new assistance in foreign military funding, the United States would have committed about $3.4 billion in security assistance to Ukraine since the Russian invasion began, and more than $4.3 billion since the start of the Biden administration.

Blinken and Austin’s visit to Ukraine is the highest-level visit by a US delegation since the start of Russia’s war against Ukraine on February 24.

It also came ahead of Tuesday’s consultations between the United States and dozens of allies at Ramstein Air Base, Germany, where Austin will discuss Ukraine’s long-term defense needs.

On Tuesday’s agenda will be an update on battlefield conditions, Ukraine’s resilience amid Russian attacks, upcoming security assistance to Ukraine, and Ukraine’s willingness and ability to move away from Russian-made systems. .

“This is not about (Ukraine’s call for) NATO membership. It is about helping them with their long-term defense needs in the future with possible migration away from Soviet systems,” a senior defense official said.

“One of the things we look forward to talking about at Ramstein on Tuesday is additional contributions from allies and partners on the systems, weapons and munitions Ukrainians need most,” Pentagon spokesman John Kirby said in a session on Sunday. informative in Poland.

Kirby said the United States has accelerated deliveries of major security assistance packages to Ukraine in the past 10 days, and some of them are already arriving. The United States sees no indication that those shipments are being intercepted by Russian forces.

On Sunday, Ukrainian officials said Russian forces launched a new airstrike on the Azovstal steel factory in Mariupol, where Ukrainian forces have taken refuge and are defiantly refusing Russian demands to surrender.

Russian President Vladimir Putin last week ordered a strict lockdown of the facility that Russian forces have fought to seize from perhaps thousands of Ukrainian fighters and civilians who have maintained control of the plant with its maze of tunnels and passageways.

At a lengthy news conference Saturday night at a kyiv metro station, Zelenskyy said he expected the Americans to produce results, both in terms of weapons and security guarantees.

“You can’t come to us empty-handed today, and we’re not just expecting gifts or some kind of cake, we’re expecting specific things and specific weapons,” he said.

In each of the last two weeks, President Biden has approved $800 million in more arms shipments to Ukraine, along with $500 million in economic assistance.

With congressional approval for military assistance for Ukraine nearly exhausted, Biden said he would seek approval for more aid, part of the West’s weaponry for Ukraine in its fight against Russia that stops short of sending troops to fight alongside Ukrainian forces.

Zelenskyy’s meeting with Austin and Blinken occurred as the Ukrainians and Russians observed Orthodox Easter. Zelenskyy is Jewish, but speaking from kyiv’s former Saint Sophia Cathedral, he alluded to Ukrainians’ wishes for the holiday.

The International Committee of the Red Cross said in a statement on Sunday that it is “deeply alarmed by the situation in Mariupol, where the population urgently needs assistance.”

“Immediate and unhindered humanitarian access is urgently required to allow the voluntary and safe passage of thousands of civilians and hundreds of wounded out of the city, including from the Azovstal plant area,” it added.

Following the visit by Blinken and Austin, Zelenskyy will meet with UN Secretary-General Antonio Guterres on Thursday. The UN chief is scheduled to meet Turkish President Tayyip Erdogan in Ankara on Monday and Putin in Moscow on Tuesday.

British officials said on Saturday that Russian troops had not gained significant ground despite announcing a renewed offensive along the eastern front, while Ukraine declared a countrywide curfew ahead of Orthodox Easter on Sunday.

“The evacuation was foiled,” Mariupol city official Petro Andryushchenko said on Telegram, adding that some 200 people gathered at the government-designated evacuation assembly point, but were “dispersed” by Russian forces. “.

Syrian refugees at the center of Turkey’s electoral battle | opinions

Syrian refugees at the center of Turkey's electoral battle | opinions