US Election 2020: Mike Pence says ‘this fight ain’t over’


Vice President Mike Pence broadcast Monday that he is up for President Donald Trump‘s fight to remain in office despite Democrat Joe Biden having seized the lead in the electoral college and won the presidency in a race called by the TV networks.

‘Told @VP Team Today, “it ain’t over til it’s over.. and this AIN’T over!’ Pence tweeted Monday afternoon. ‘President @RealDonaldTrump has never stopped fighting for us and we’re gonna Keep Fighting until every LEGAL vote is counted!

His tweet rallying the troops came as Biden expanded his lead in battleground states, a trickle of elected Republicans congratulated Biden, and world leaders placed calls to their next counterpart. 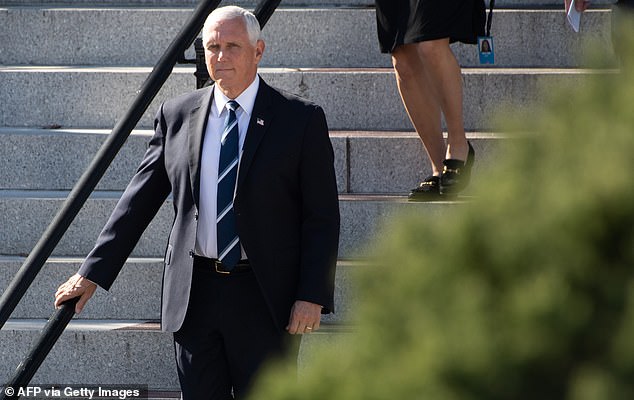 ‘It ain’t over til it’s over.. and this AIN’T over,’ Vice President Mike Pence says he told his team

Trump’s campaign effort continues to raise funds for its legal ballot, although as of Monday afternoon lawyers had yet to file a suit promised by Trump lawyer Rudy Giuliani in Pennsylvania. The effort encountered a setback Monday when the first witness Giuliani brought out at a Saturday press conference was identified as a convicted child sex offender.

Maine Senator Susan Collins, a Republican, congratulated Biden on his ‘apparent victory’ in a statement where she refers to him as ‘president-elect’ about the same time as Pence issued his battle cry.

‘I would offer my congratulations to President-elect Biden on his apparent victory – he loves this country, and I wish him every success,’ Maine Republican Sen. Susan Collins said in a statement that referenced the transition

‘This election is over,’ President-elect Joe Biden said Monday, calling for unity and naming a coronavirus advisory group

It all came on a day when President-elect Joe Biden, announcing his new coronavirus task force advisory panel, declared: ‘This election is over.’

The Trump-nominated official who heads the General Services Agency, however, has yet to assess that Biden won, freezing in place transition efforts.

Collins’ carefully parsed statement, issued in her trademark difference-splitting fashion, makes her the third elected GOP senator to publicly acknowledge Biden’s win, after TV networks called him as the winner in the Electoral College.

She stands in the currently lonely group that includes Utah Sen. Mitt Romney, who was the first to congratulate Biden on his victory, and Alaska Sen. Lisa Murkowski. Trump regularly attacks Romney, the party’s 2012 presidential nominee, as a ‘RINO,’ a ‘Republican in Name Only.’

Other top Republicans, including Senate Majority Leader Mitch McConnell, have either backed Trump or issued vague statements acknowledging his right to contest the election – which the president is doing with threats of lawsuits and an unfounded declaration that he ‘won.’

‘First, I would offer my congratulations to President-elect Biden on his apparent victory – he loves this country, and I wish him every success,’ Collins said in a statement.

‘Presidential transitions are important, and the President-elect and Vice-President-elect should be given every opportunity to ensure that they are ready to govern on January 20th,’ she added.

That second statement could be a comment on the Trump administration’s refusal so far to assess Biden as the winner, which would trigger actions and coordination under the Presidential Transitions Act.

She continued: ‘I understand the President and others have questions about the results in certain states. There is a process in place to challenge those results and, consistent with that process, the President should be afforded the opportunity to do so.

‘I know that many are eager to have certainty right now. While we have a clear direction, we should continue to respect that process. I urge people to be patient. The process has not failed our country in more than 200 years, and it is not going to fail our country this year,’ Collins wrote.

Collins was leading in the vote count based on results coming out of her home state and has been declared the winner by TV networks – although she technically didn’t win her own race, since Maine has yet to certify the results.

Absent pushback from his own party, Trump remains on a war footing to contest the election, although his lawyers have yet to put forward evidence to back up their charges of systemic fraud.

Trump campaign manager Bill Stepien told Trump’s campaign staff in a meeting at their Virginia headquarters that ‘We are still in this fight, NBC News reported.

The diverging statements come as Trump ‘terminated’ Defense Secretary Mark Esper in what is expected to be a post-election purge, even though his term expires January 20th.

Urinary tract problems are treatable but, as model Scarlett Howard found they can last for years