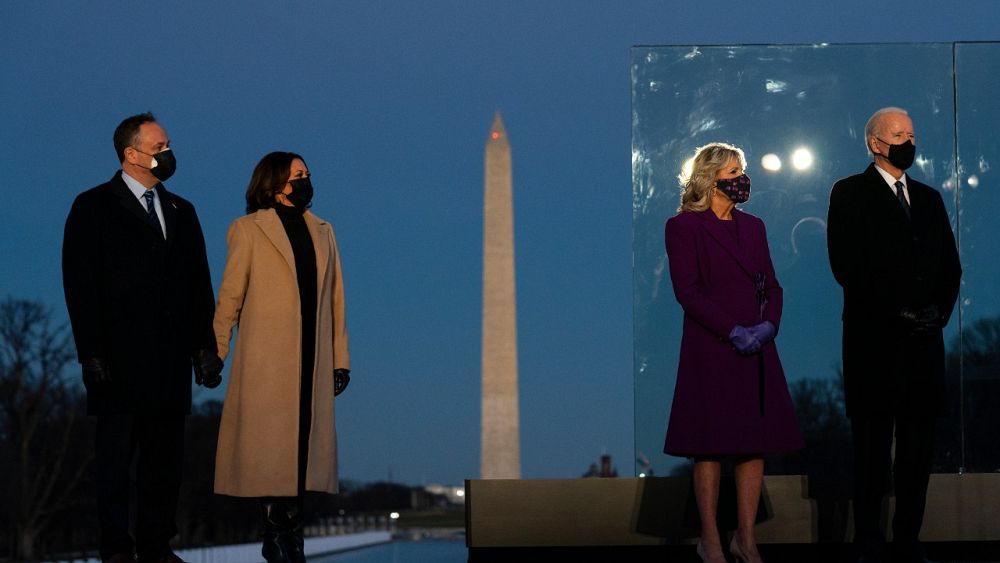 Hours from inauguration, President-elect Joe Biden paused on what might have been his triumphal entrance to Washington Tuesday evening to mark instead the national tragedy of the coronavirus pandemic with a moment of collective grief for Americans lost.

His arrival coincided with the awful news that the U.S. death toll had surpassed 400,000 in the worst public health crisis in more than a century — a crisis Biden will now be charged with controlling.

“To heal we must remember,” the incoming president told the nation at a sunset ceremony at the Lincoln Memorial. Four hundred lights representing the pandemic’s victims were illuminated behind him around the monument’s Reflecting Pool.

“Between sundown and dusk, let us shine the lights into the darkness … and remember all who we lost,” Biden said.

The sober moment on the eve of Biden’s inauguration — typically a celebratory time in Washington when the nation marks the democratic tradition of a peaceful transfer of power — was a measure of the enormity of loss for the nation.

During his brief remarks, Biden faced the larger-than life statue of Abraham Lincoln, the Civil War president who served as more than 600,000 Americans died. As he turned to walk away at the conclusion of the vigil, he faced the black granite wall listing the 58,000-plus Americans who perished in Vietnam.

Biden was joined by Vice President-elect Kamala Harris, who spoke of the collective anguish of the nation, a not-so-subtle admonishment of outgoing President Donald Trump, who has spoken sparingly about the pandemic in recent months.

“For many months we have grieved by ourselves,” said Harris, who will make history as the first woman to serve as vice president when she’s sworn in. “Tonight, we grieve and begin healing together.”

An inauguration amid ‘dark times’

Biden, an avid fan of Amtrak who took the train thousands of times between his home in Delaware and Washington during his decades in the Senate, had planned to take a train into Washington ahead of Wednesday’s Inauguration Day but scratched that plan in the aftermath of the Capitol riot.

He instead flew into Joint Base Andrews just outside the capital and then motorcaded into fortress D.C. — a city that’s been flooded by some 25,000 National Guard troops guarding a Capitol, White House and National Mall that are wrapped in a maze of barricades and tall fencing.

“These are dark times,” Biden told supporters in an emotional sendoff in Delaware. “But there’s always light.”

Inaugural organizers this week finished installing some 200,000 U.S., state and territorial flags on the National Mall, a display representing the American people who couldn’t come to the inauguration, which is tightly limited under security and Covid restrictions.

The display was also a reminder of all the president-elect faces as he looks to steer the nation through the pandemic with infections and deaths soaring.

Aides say Biden will use Wednesday’s inaugural address — one that will be delivered in front of an unusually small in-person group because of virus protocols and security concerns and is expected to run 20 to 30 minutes — to call for American unity and offer an optimistic message that Americans can get past the dark moment by working together.

To that end, he extended invitations to Congress’ top four Republican and Democratic leaders to attend Mass with him at St. Matthew’s Cathedral ahead of the inauguration ceremony.

Beyond the pandemic, the incoming president faces no shortage of problems when he takes the reins at the White House. The nation is also on its economic heels because of soaring unemployment, there is deep political division and immediate concern about more violence following the Jan. 6 insurrection at the U.S. Capitol.

Biden, who ran for the presidency as a cool head who could get things done, plans to issue a series of executive orders on Day One — including reversing Trump’s effort to leave the Paris climate accord, canceling Trump’s travel ban on visitors from several predominantly Muslim countries, and extending pandemic-era limits on evictions and student loan payments.

Out of the starting gate, Biden and his team are intent on moving quickly to speed distribution of vaccinations to anxious Americans and pass his $1.9 trillion virus relief package, which includes quick payments to many people and an increase in the minimum wage to $15 an hour.

Biden also plans to unveil a sweeping immigration bill on the first day of his administration, hoping to provide an eight-year path to citizenship for an estimated 11 million people living in the U.S. without legal status. That would be a major reversal from the Trump administration’s tight immigration policies.

Some leading Republican have already balked at Biden’s immigration plan. Many of Biden’s legislative ambitions could be tempered by the hard numbers he faces on Capitol Hill, where Democrats hold narrow majorities in both the Senate and House. His hopes to press forward with an avalanche of legislation in his first 100 days could also be slowed by an impeachment trial of Trump.

As Biden made his way to Washington, five of his Cabinet picks were appearing Tuesday before Senate committees to begin confirmation hearings. Treasury nominee Janet Yellen urged lawmakers to embrace Biden’s virus relief package, arguing that “the smartest thing we can do is act big.”

Trump won’t be on hand as Biden is sworn in, the first outgoing president to entirely skip inaugural festivities since Andrew Johnson more than a century and a half ago.

The White House released a farewell video from Trump just as Biden landed at Joint Base Andrews. Trump, who has repeatedly and falsely claimed widespread fraud led to his election loss, extended “best wishes” to the incoming administration in his nearly 20-minute address but did not utter Biden’s name.

Trump also spent some of his last time in the White House huddled with advisers weighing final-hour pardons and grants of clemency. He planned to depart from Washington Wednesday morning in a grand airbase ceremony that he helped plan himself.