In a dramatic shift from breathless ‘if true…’ coverage of damaging leaks and rumors during Donald Trump‘s presidency, the mainstream US media remains notably silent after a British newspaper claimed to reveal documents proving a Russian plot to support Trump.

The Guardian on Thursday published an explosive report based on the purported Kremlin documents, but nearly all US outlets have refrained from covering the story, aside from commentary expressing skepticism about the documents.

Perhaps unsurprisingly, conservative-leaning outlets including Fox News and the New York Post have also shied away from the story.

But after years of exuberantly hyping every whisper that could be damaging to Trump, the left-wing media’s caution signaled their quiet doubts about the report. 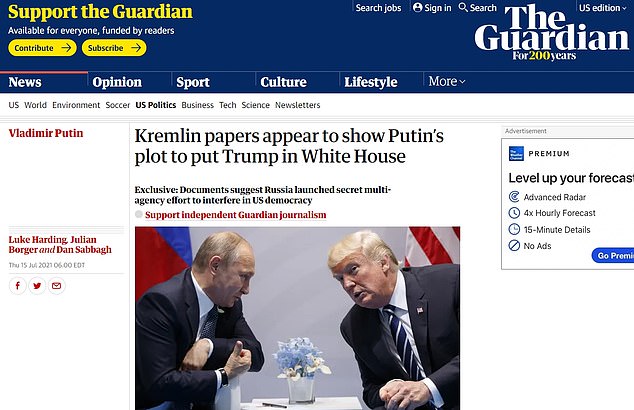 The Guardian on Thursday published an explosive report (above) based on the supposed Kremlin documents, but nearly all US outlets have refrained from covering the story 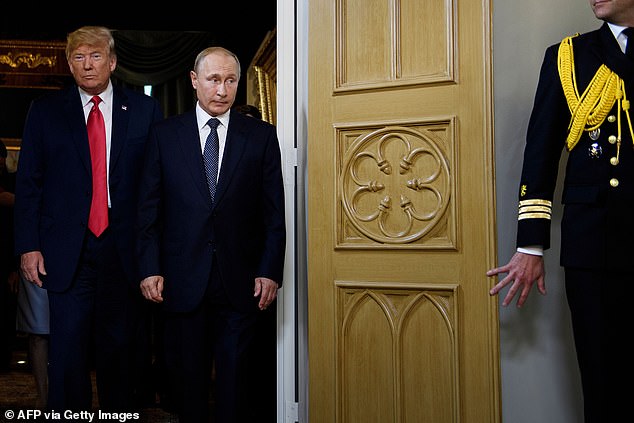 The Guardian report cited documents supposedly leaked from the Kremlin, showing that Vladimir Putin personally ordered a top-secret multi-agency spy operation to help a ‘mentally unstable’ Trump win the 2016 election and sow discord in the US

US outlets that did cover the Guardian report included Business Insider, Forbes, and the New York Daily News.

The Guardian report cited documents supposedly leaked from the Kremlin, purportedly showing that Vladimir Putin personally ordered a top-secret multi-agency spy operation to help a ‘mentally unstable’ Trump win the 2016 election and sow discord in the US.

Trump’s spokeswoman called the report a ‘hoax’ and Putin’s spokesman Dmitri Peskov dismissed the story as ‘great pulp fiction’ and ‘utter nonsense’, saying the documents are not authentic.

The document also references, but does not reveal the nature of, supposed ‘compromising material’ on Trump gathered during visits to Russia, echoing the salacious, still unverified claims of British ex-spy Christopher Steele’s ‘dirty dossier’.

The Guardian did not reveal the source of the documents, or even whether it knew who the source was, saying only that the papers ‘seem to represent a serious and highly unusual leak from within the Kremlin.’

A spokesperson for the newspaper told DailyMail.com in a brief statement on Friday: ‘Independent experts believe the documents to be genuine. We stand by our reporting.’

The spokesperson declined to answer detailed questions about the context of the documents.

In one of the few US articles addressing the Guardian’s claims, Washington Post commentator Philip Blum wrote that ‘it’s hard not to be skeptical of the document’

In one of the few US articles addressing the Guardian’s claims, Washington Post commentator Philip Blum wrote that ‘it’s hard not to be skeptical of the document, for a number of reasons.’

‘First and foremost, it’s very neat. As described by the Guardian, it reads like one of those viral Twitter threads from a guy with 4.4 million followers whose bio describes him as “resister-in-chief,”‘ wrote Blum.

Asked for comment, former President Donald Trump tore into the report in comments to DailyMail.com by spokeswoman Liz Harrington.

‘This is disgusting. It’s fake news, just like RUSSIA, RUSSIA, RUSSIA was fake news. It’s just the Radical Left crazies doing whatever they can to demean everybody on the right,’ the former president said.

Trump then defended his own record on Russia, and touted sanctions his administration slapped on Moscow. ‘It’s fiction, and nobody was tougher on Russia than me, including on the [Nord Stream 2] pipeline, and the sanctions. At the same time we got along with Russia. Russia respected us, China respected us, Iran respected us, North Korea respected us.’

‘And the world was a much safer place than it is now with mentally unstable leadership,’ he said, ripping a term from the purported Kremlin documents and using it on his successor.

‘There’s no telling why a secret government document might emerge at any particular time, but it is odd that this document, so closely related to the national discourse over the past five years, only emerged now,’ Blum wrote.

‘It was purportedly leaked from within the Kremlin, but that happened only now? Or it only trickled down to the media now, when so many other things emerged more quickly? It’s curious,’ he added.

‘First of all, as the story itself admits, the Kremlin doesn’t leak, at least not without a purpose, and the purpose behind this leak is still pretty vague,’ he wrote.

‘Frankly, my impulse is to believe what The Guardian reported,’ added Blum. ‘But my innate caution against leaping to conclusions based on leaks from intelligence services of any kind makes me cautious about this being a conclusive Eureka moment.’

Blum and others also raised questions, delicately, about the credibility of the lead reporter behind the Guardian’s scoop.

In 2018, Guardian reporter Luke Harding published another bombshell exclusive claiming that Trump’s former campaign chair Paul Manafort had met with Julian Assange in London prior to the release of stolen DNC emails on WikiLeaks.

‘It, too, was a massive allegation — but one that was never substantiated. The evidence was thin at the outset, and it was not corroborated in [Robert] Mueller’s research or in subsequent reporting,’ wrote Blum.

‘It was quickly embraced for how tightly it tied Trump’s campaign to the Russian effort, but it’s hard to assume that it’s accurate. No correction or retraction was offered, so the Guardian clearly stands by it,’ Blum noted.

Philadelphia Inquirer columnist Will Bunch expressed similar concerns in a tweet, writing: ‘There’s a bombshell report about Putin and the 2016 election, but – while I used to consider the Guardian a highly trusted source – the lead reporter was behind a bizarre surely-wrong scoop about Manafort, Assange.’

‘I’d to wait to see if anyone else more credible has the papers,’ he added.

Outside the world of journalism, analysts and intelligence experts are also expressing doubts about the documents.

Chris Krebs, the former director of the Cybersecurity and Infrastructure Security Agency who was fired by Trump for disputing his election fraud claims, tweeted that the leaked document ‘reeks’ of disinformation.

‘This is far too convenient, he noted, adding ‘It could all be individually or collectively true and at the same time planted & fake.’

People identified in rediscovered Alaska photos from 60 years ago

Product Title: Wonderful Self Click here to get Amazing Self at discounted price while it's still...