The U.S. State Department has ordered families of U.S. Embassy personnel living in Ukraine to start evacuating as soon as Monday, according to officials.

The department is also expected to tell Americans in the country next week to leave via commercial flights ‘while those are still available,’ an official told DailyMail.com

The order comes after U.S. Secretary of State Anthony Blinken and Russian Foreign Minister Sergei Lavrov met in Geneva on Friday for crunch talks over the Ukraine crisis. 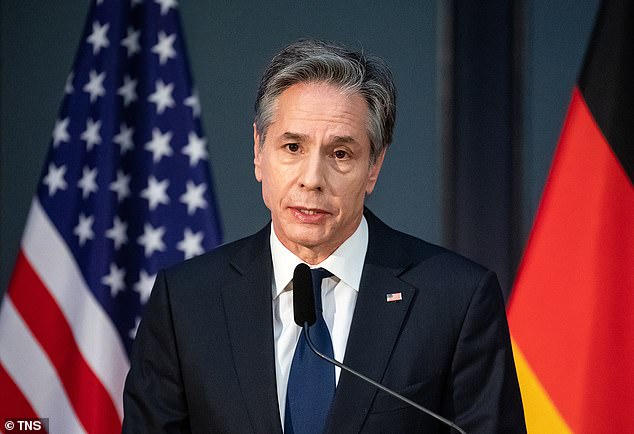 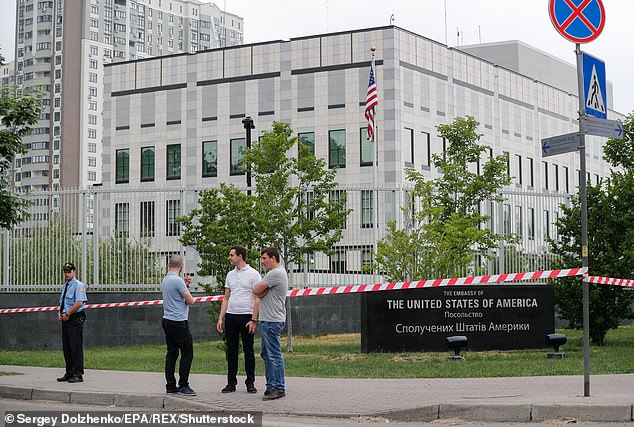 The U.S. State Department has ordered families of U.S. Embassy personnel living in Ukraine to start evacuating as soon as Monday, according to officials 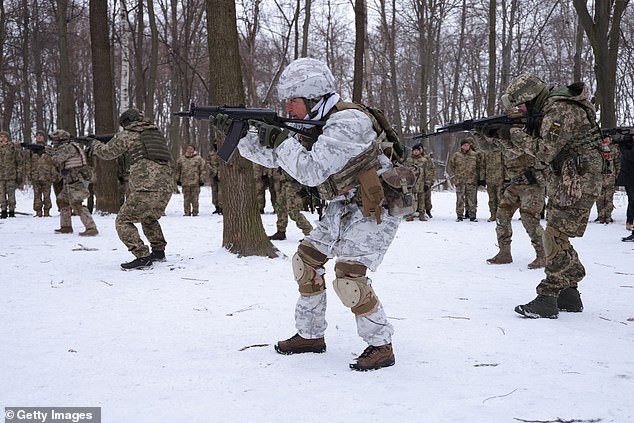 Ukrainian President Volodymyr Zelensky has predicted a ‘large-scale’ war with Russia if the superpower attempts to occupy the industrial city of Kharkiv – which he believes is a target due to its large Russian-speaking population.

Blinken said there were ‘no breakthroughs’ in the talks with the United States’ former Cold War rival in a bid to prevent an imminent war with Ukraine.

Kharkiv, in Eastern Ukraine, is the former Soviet republic’s second biggest city with a population of about 1.4 million, and Zelensky believes it is a ‘feasible’ target for Vladimir Putin.

After meeting with President Zelensky, Blinken warned that Russia could attack Ukraine on ‘very short notice’ during remarks at the American embassy in Kyiv on Wednesday.

Blinken met with President Volodymyr Zelensky earlier this week as the Biden administration said it would providing an additional $200 million in defensive military aid to the country amid growing fears of a Russian invasion.

Blinken told embassy staff in Kyiv: ‘We know that there are plans in place to increase that (Russian) force even more on very short notice.’

He also maintained that a peaceful, diplomatic solution was still the priority, but stressed the situation was entirely reactive to Russian President Vladimir Putin’s actions.

‘I strongly, strongly hope that we can keep this on a diplomatic and peaceful path, but ultimately, that’s going to be President Putin’s decision.’, Blinken said. 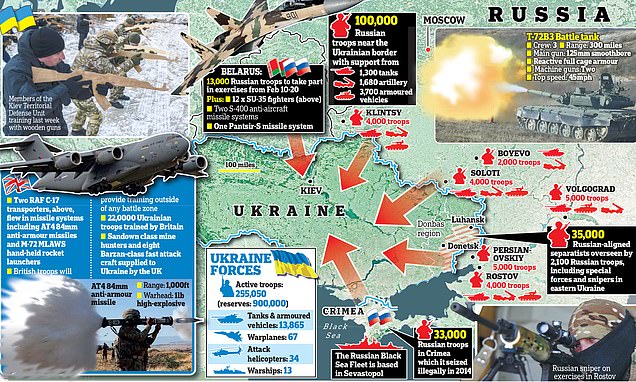 On top of the military forces sent to Ukraine by Britain, the Biden administration today said it is providing an additional $200 million in defensive military aid to the country, with the US having previously supplied small arms, ammunition, secure radios, medical equipment, spare parts and other equipment. Biden has also previously ruled out sending US forces into Ukraine, but special forces already operate under rotation there to train Ukrainian soldiers 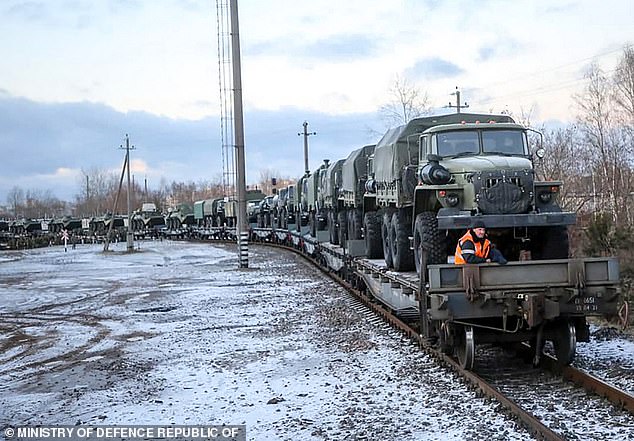 Russian military vehicles arriving in Belarus are seen in this photograph distributed by the Belarus Ministry of Defense on Tuesday, ahead of joint exercises 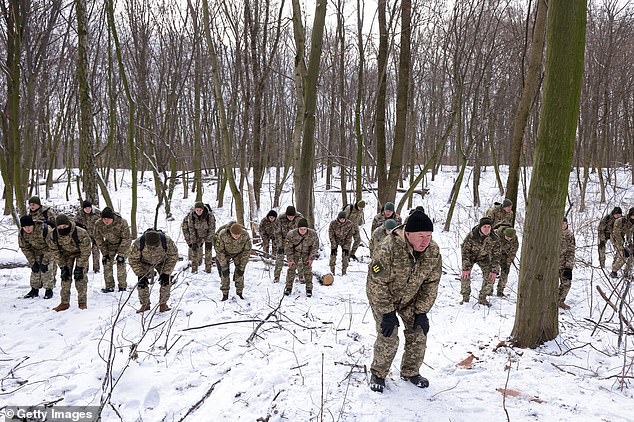 Blinken’s insistence on a ‘severe’ response came a day after President Joe Biden drew widespread criticism for saying retaliation would depend on the details – and that a ‘minor incursion’ could prompt discord among Western allies.

On Thursday, Mr Biden cautioned that any Russian troop movements across Ukraine’s border would constitute an invasion and that Moscow would ‘pay a heavy price’ for such an action.

‘I’ve been absolutely clear with President Putin,’ Mr Biden said. ‘He has no misunderstanding: Any, any assembled Russian units move across the Ukrainian border, that is an invasion.’

Asked whether Russia was intimidated by Ukraine, Deputy Foreign Minister Sergei Ryabkov said on arriving for the talks on a cold and blustery day in Geneva: ‘We’re not afraid of anyone, even not of the U.S.’

In Moscow, the Kremlin reacted coolly to a parliament initiative to recognise two pro-Russian breakaway regions in eastern Ukraine as independent states, saying it was important to avoid steps that could increase tensions.

Kremlin spokesperson Dmitry Peskov said it was important not to try and score political points in such a fragile situation.

Scholz and British Prime Minister Boris Johnson shared a phone call on Thursday evening, putting out a statement today that warned Russia would pay a ‘considerable and serious price’ if it invades Ukraine. 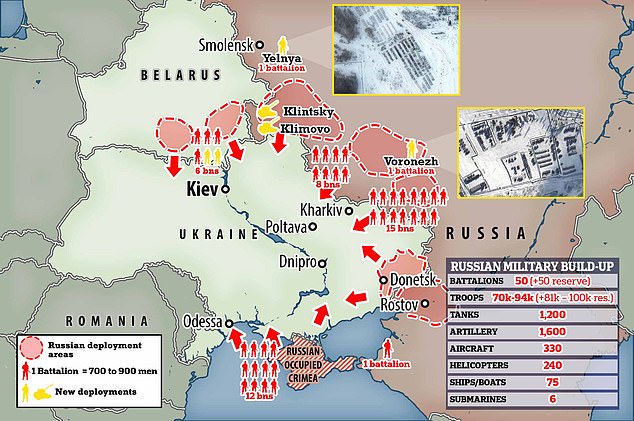 Moscow has for weeks been massing tens of thousands of troops, tanks and artillery pieces along its eastern flank, sparking fears of an invasion, though the Kremlin has insisted it is merely a defence force (pictured, Russian forces currently massed in border regions)

The two leaders agreed that ‘further military aggression by Russia against Ukraine must be averted’ and there would be consequences if the situation were to escalate, the German chancellery said.

Even while rejecting the core Russian demands, the Biden administration has said it is willing to speak to Moscow about its security concerns.

One proposal by the United States is to revive restrictions on missiles in Europe that had been set by the Intermediate-Range Nuclear Forces Treaty, a Cold War deal trashed by former president Donald Trump’s administration as it accused Moscow of violations.

The Biden administration has also offered more transparency on military exercises. Russia has not rejected the proposals but says that its core concern is Ukraine.

UK Foreign Secretary Liz Truss, speaking in Australia amid talks on the new AUKUS submarine pact, today warned Putin to ‘desist and step back’ from Ukraine before making ‘a massive strategic mistake’.

‘Invasion will only lead to a terrible quagmire and loss of life, as we know from the Soviet-Afghan war and conflict in Chechnya,’ she said.

‘We need everyone to step up. Together with our allies, we will continue to stand with and urge Russia to de-escalate and engage in meaningful discussions. What happens in eastern Europe matters for the world.’

Moscow insists it has no plans to invade but has at the same time laid down a series of demands – including a ban on Ukraine joining NATO – in exchange for de-escalation.

Washington has rejected Moscow’s demands as ‘non-starters’ and NATO chief Jens Stoltenberg this week insisted that the alliance ‘will not compromise on core principles such as the right for each nation to choose its own path’.

Upping the ante, Russia announced new naval drills that will see it deploy to the Atlantic, Pacific, Arctic and Mediterranean ‘more than 140 warships and support vessels, more than 60 aircraft, 1,000 pieces of military equipment, and about 10,000 servicemen’.

The announcement followed an angry condemnation from the Kremlin of what it described as ‘destabilising’ remarks from US President Joe Biden, after the American leader vowed a ‘severe’ response to any invasion of Ukraine.

A US official said the exercises could presage a permanent Russian military presence involving both conventional and nuclear forces in Belarus.