US threatens to destroy any Iranian missiles shipped to Venezuela

The United States has threatened to destroy any long-range missiles sent to Venezuela from Iran, after a UN embargo on Iran buying or selling weapons expired last week.

The warning comes a few days after Venezuela President Nicholas Maduro announced the creation of a Scientific and Technological Military Council that will seek the independence of the country in terms of its weapons system with the help of ‘sister’ nations, among which he mentioned China, Russia, Iran and Cuba.

There’s no confirmation that a shipment is imminent however a US official said the countries are likely to do arms deals.

‘The transfer of long-range missiles from Iran to Venezuela is not acceptable and will not be tolerated or permitted.’ Elliot Abrams, State Department Special Representative for both countries, told Fox News. 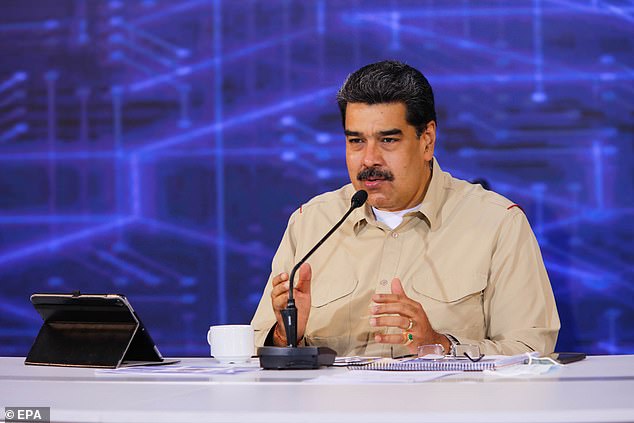 The United States has threatened to destroy any long-range missiles sent to Venezuela from Iran. President of Venezuela Nicolas Maduro is pictured on September 30 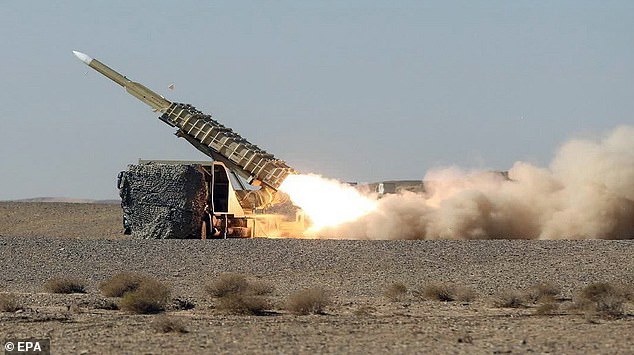 The Cuban missile crisis brought the world as close as it has ever been to nuclear war in October 1962.

After America’s failed attempt to overthrow Fidel Castro, the Cuban strongman allowed the Soviet Union to deploy nuclear missiles in Cuba – putting the warheads in easy striking distance of most of the US.

If Russia chose, it could launch the missiles at the US before Washington had a chance to retaliate. 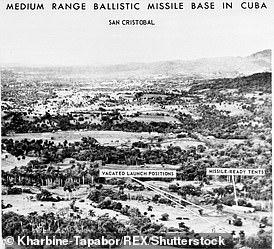 America had already deployed ballistic missiles in Italy and Turkey – putting them within easy striking distance of Moscow.

President John F Kennedy informed Americans during a television broadcast on October 22, 1962, that the Soviets had placed missiles on Cuba and that in retaliation, the US would erect a blockade around the island to force Castro and Khrushchev to remove to missiles.

He announced America would be willing to use military force if necessary to deter what was seen as a threat to national security – and the world waited with baited breathe.

On October 24, 1962, another key moment came when Soviet ships heading for Cuba neared the line of U.S. vessels enforcing the blockade. An attempt to breach the blockade would most likely have resulted in a military stand-off, but Soviet ships backed down.

A flashpoint which could have triggered all-out war was when an American reconnaissance plane was shot down on October 27, 1962.

A U.S. invasion force readied itself for an invasion of Cuba but were eventually stood down. The 35-year-old pilot of the downed plane, Major Rudolf Anderson, is considered the sole U.S. combat casualty of the Cuban missile crisis.

Throughout the tense stand-off, Khrushchev and Kennedy were in contact to try to avoid any military escalation between the two superpowers. On October 26, 1962, Khrushchev sent a message to Kennedy in which he offered to remove the Cuban missiles in exchange for a promise by U.S. leaders not to invade Cuba.

The following day, Khrushchev sent a letter proposing that the USSR would dismantle its missiles in Cuba if the Americans removed their missile installations in Turkey.

‘We will make every effort to stop shipments of long-range missiles, and if somehow they get to Venezuela they will be eliminated there.’

The proposed blockade bears similarities to 1962 when President John F. Kennedy blockaded Cuba to stop the Soviet Union from shipping missiles there.

It nearly sparked a nuclear war on October 27, 58 years ago, but the countries came to an agreement at the last minute.

The Trump admin recently tried to convince the UN Security Council to extend an embargo on Iran trading arms but was unsuccessful.

Last week Maduro bragged that his military council would have the ‘greatest minds’ and that other countries around the world would be impressed.

Senior administration official, Abrams, continued: ‘Iran has announced its intention to engage in arms sales, and Venezuela is an obvious target because those two pariah regimes already have a relationship.

‘Venezuela is paying in gold to buy gasoline from Iran, and there is an Iranian presence in the country. Venezuela’s economy has collapsed, so every bar of gold for Iran is tens of thousands of dollars the Venezuelan people need for food and medicine.’

Abrams said that a transfer of missiles would put countries near Venezuela at risk.

In an announcement last week Maduro Bolivarian National Armed Forces (FANB) to stand by for expected attacks from Colombia and to be ready to defend the country’s border with Brazil and the Caribbean Sea.

‘Iran has shipped missiles to the Houthis, so we know they are ready, willing, and able to ship them to Venezuela and other possible buyers,’ Abrams continued.

‘Every delivery of Iranian arms destabilizes South America and the Caribbean, and is especially dangerous to Venezuela’s neighbors in Brazil, Colombia, and Guyana.’

Last week, Reuters reported that a senior Trump administration envoy met secretly with a representative of Maduro last month to try to work out Maduro’s peaceful exit from power.

However no agreement was reached between Richard Grenell, the former acting US Director of National Intelligence and former ambassador to Germany, and Jorge Rodriguez, according to three people familiar with the matter.

They reportedly met in Mexico City after Trump became frustrated that his pressure to unseat Maduro wasn’t working.

Grenell is also a senior Trump campaign adviser and it’s believed Trump has been looking to gain favor with some Latin American voters in Florida ahead of the election.

Sources told Reuters that Venezuela is waiting to see the outcome of the election.

Meanwhile, on Monday the US imposed fresh Iran-related sanctions targeting the Islamic Republic’s oil sector, including the Iranian Ministry of Petroleum.

The Treasury Department in a statement said it was slapping sanctions on key actors in Iran’s oil sector for supporting the Quds Force, the elite foreign paramilitary and espionage arm of the Islamic Revolutionary Guard Corps blacklisted by the United States.

‘The regime in Iran uses the petroleum sector to fund the destabilizing activities of the IRGC-QF,’ Treasury Secretary Steven Mnuchin said in the statement. 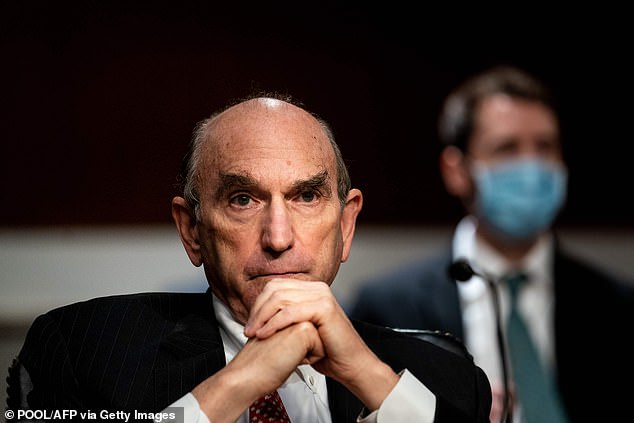 ‘The transfer of long-range missiles from Iran to Venezuela is not acceptable and will not be tolerated or permitted.’ Elliot Abrams, State Department Special Representative for both countries, told Fox News 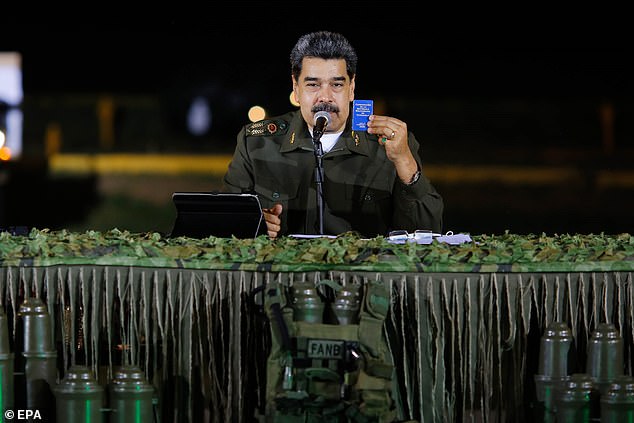 Last week Venezuela President Nicholas Maduro announced the creation of a Scientific and Technological Military Council that will seek the independence of the country in terms of its weapons system with the help of ‘sister’ nations, among which he mentioned China, Russia, Iran and Cuba

Tensions between Washington and Tehran have soared since Trump unilaterally withdrew in 2018 from the Iran nuclear deal struck by his predecessor President Barack Obama and began reimposing US sanctions that had been eased under the accord.

The minister of petroleum, the National Iranian Oil Company (NIOC) and National Iranian Tanker Company were also blacklisted alongside other individuals and entities in Washington’s move on Monday, which freezes any US assets of those blacklisted and generally bars Americans from dealing with them.

The Treasury also imposed sanctions on Mahmoud Madanipour and United Arab Emirates-based Mobin International Limited, accusing them of entering into an agreement with Venezuelan state-owned Petroleos de Venezuela (PDVSA) to ship gasoline obtained from NIOC to the government of Venezuelan President Nicolas Maduro.

Mobin International and Oman Fuel have said they were the owners of the cargo aboard several tankers confiscated by US authorities in August.

The Justice Department said the cargo was destined for Venezuela, whose oil industry is also under US sanctions, but the companies denied in court filings that Venezuela was the destination.

Iran has sent two other flotillas carrying fuel to gasoline-short Venezuela, and they entered the South American country without US interference.