USA stars donned protective googles as they soaked the changing room in champagne and beer after booking their place at the 2022 Qatar World Cup.

The United States, who missed out on the 2018 tournament, lost 2-0 to Costa Rica but still progressed along with the Mexicans, who beat El Salvador 2-0.

On the final matchday of CONCACAF qualifying, the United States knew that a win, draw or loss by less than six goals would ensure a return to the World Cup finals.

Much like when NFL, NBA, MLB or even NHL teams win the championship in their respective leagues, it is a common trend for the players to put on googles, and has been a symbol of winning in American sports for over 10 years. 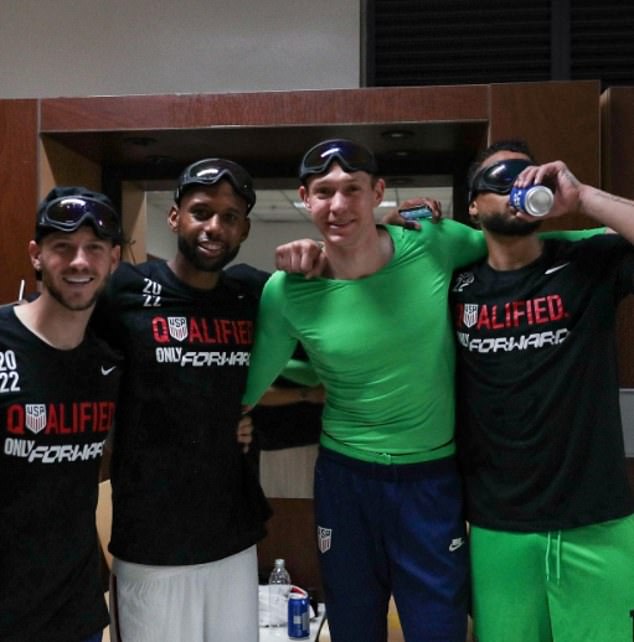 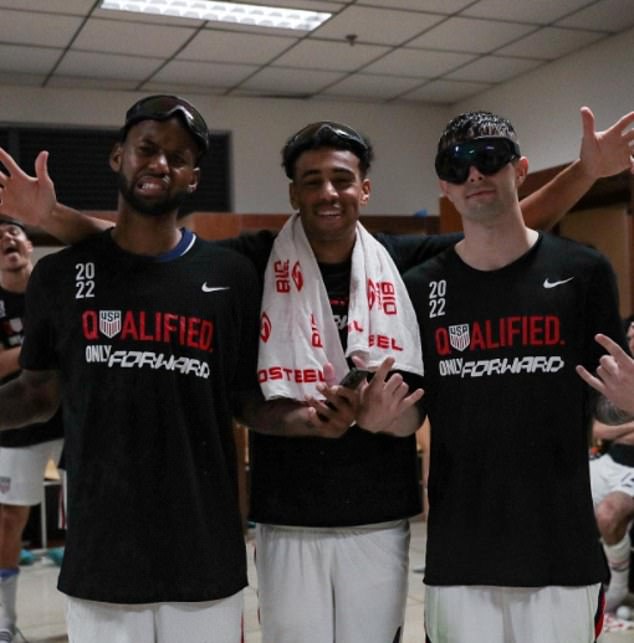 Much like when NFL, NBA, MLB or even NHL teams win, USA celebrated with their googles on 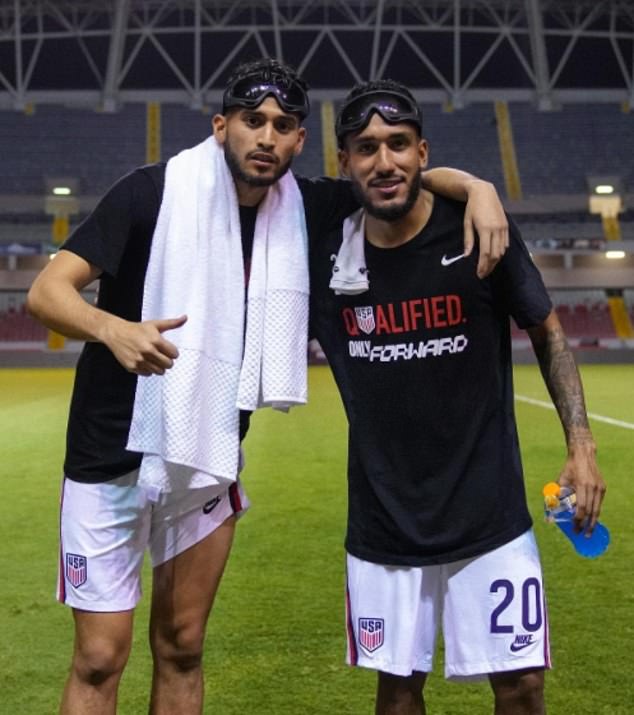 USA suffered a 2-0 defeat to Costa Rice, but that didn’t stop the celebrations post-match

Sporting giants such as Boston Red Sox, LA Lakers, and Milwaukee Bucks to name a few have been seen celebrating in such a way in years past.

Players spraying each other with bubbly, while wearing ‘beer or champagne googles’, as they drink or pour beer over themselves – and USA were no different despite losing the match.

Costa Rica went ahead in the 51st minute from a Juan Pablo Vargas header before Anthony Contreras doubled the lead from close range shortly after.

But that meant very little to the celebrations, as Chelsea’s Christian Pulisic and RB Leipzig’s Tyler Adams were two of the big-names among the wild celebrations. 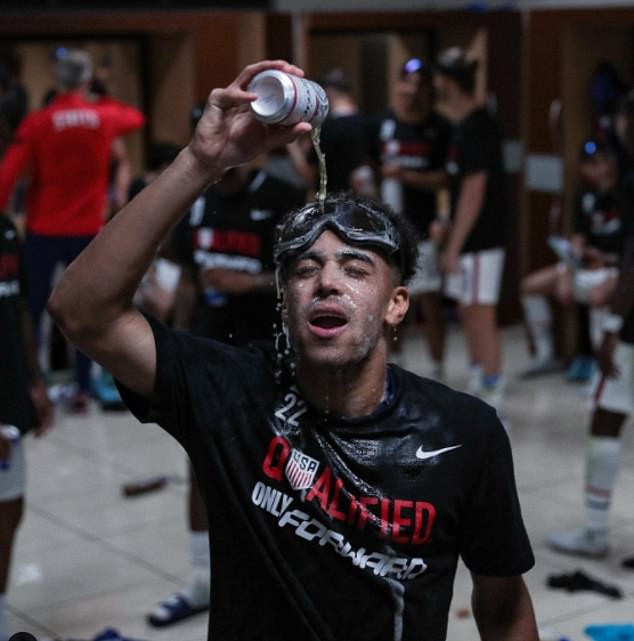 The bizarre tradition actually started to stop alcohol getting into players eyes or even a cork hitting them at speed during the wild celebrations.

But it has now stuck and has become a typical tradition in American sports.

USMNT tweeted during the celebrations: ‘This Bud’s for the fans that have had our back this entire journey, through thick and thin.’

Fans reacted differently by taking to social media to claim a number of the players are not over 21 – the legal drinking age in America.

Although the game took place in Costa Rica, which has a drinking age of 18, which some fans were also quick to point out.

One questioned the googles, by saying: ‘All these USMNT players posting their celebrations with their goggles, but they’re not 21 years old.

Another said: ‘What’s Gio got goggles on for man? He can’t drink.’

To which another fan replied: ‘They’re in Costa Rica yes he can.’

However, some fans were quick to realise the drinking age in Costa Rica is just 18 years of age

USA will be placed into Pot 2 for the draw to decide the eight four-team groups, which will be held Friday at midday.

PlayOffs NBA 2022: Doncic saves Curry’s broom and opts for what no one has yet achieved in NBA history

Host Qatar is in Group A with the top seven seeds. Then eight groups of four teams each will be constructed.

‘It’s amazing what this group of guys have been able to do over these last seven months,’ head coach Gregg Berhalter told CBS Sports. 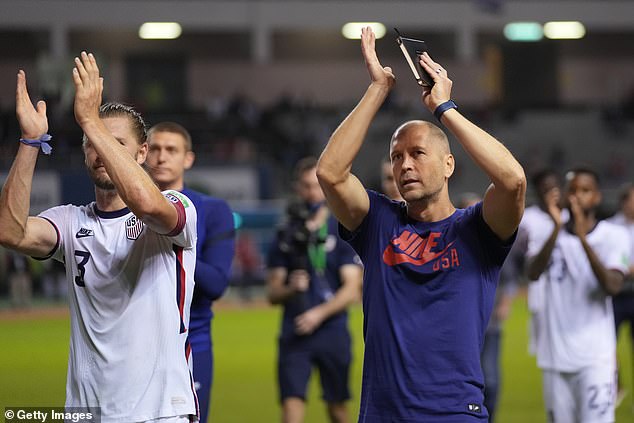 ‘I’ve really seen the team grow and this is a great accomplishment. We are looking forward to the World Cup.’

Berhalter was part of the U.S. team that reached the quarter-finals at the 2002 World Cup, where they lost to Germany. He was also part of their 2006 World Cup squad but did not play any games as they were knocked out in the group stage.

‘I don’t think that has sunk in yet,’ he said, when asked about leading the team to the World Cup as a coach.

‘Just being at a World Cup as a player is one of the most special things you can do… now to be doing it as a coach with this group of players is something special.’

Selena’s legacy 27 years after her death

EThe Warriors player starred one of the most unlikely scenes that have ever been seen on a basketball court when leaving the 'dead' ball on the back ledge...

They went through a period of flying under the radar, but fiercely private Adele and her man Rich Paul are now firmly back in the limelight once again.After...

PlayOffs NBA 2022: Doncic saves Curry’s broom and opts for what no one has yet achieved in NBA history

Lhe Dallas Mavericks beat Golden State Warriors 119-109 to make it 1-3 in their NBA Playoffs series and stay alive in the Western Final.The Texan franchise was forced...

NBA coach Steve Kerr lost his temper as he demanded background checks for guns in the wake of Tuesday's massacre at a Texas school that killed 19 children.  The...

PlayOffs NBA 2022: The top-5 of pure heart of the Boston Celtics: ‘magician’ Tatum and ‘airline’ Williams

Lhe Boston Celtics have the soul of a champion. In the 2022 Playoffs they show it after each game, in which they have gone from being on the...