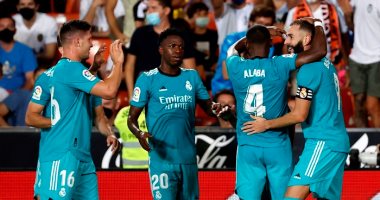 Real Madrid managed to end the knot of not beating Valencia in its stronghold, “Mestalla”, after an absence of 1331 days, after its deadly victory, which it achieved on Sunday evening, with a score of 1-2, in the fifth round of the Spanish League competition for the current season 2021-2022.

The last victory achieved by the royal in “Mestalla”, the stronghold of the bat team, was on January 27, 2018, with a score of 4-1. The Portuguese star Cristiano Ronaldo scored two goals, along with a goal for Marcelo and Toni Kroos, while the goal of Valencia was Santiago Mina.

Real Madrid lost two games and tied one match during their last 3 visits to the Valencia stronghold. They were defeated during the 2018-2019 season, with a score of 2-1, and tied 1-1 in the following season, and lost 4-1 last season.

The first half witnessed the exit of 3 players from the two teams due to injury, as the young American Noah Moussa participated in the place of the recently brilliant Carlos Soler in the 15th minute, and Tony Lato replaced Terry Correa in the 23rd minute for the Valencia team, and Lucas Vazquez participated in the Real Madrid instead of Danny Carvajal in the 26th minute..