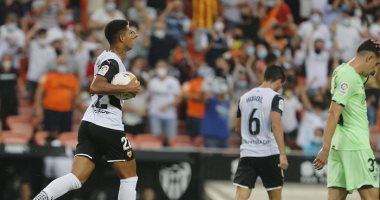 Valencia snatched an exciting 1-1 draw at Athletic Bilbao in the match that brought the two teams together today, Saturday, at the Mestalla Stadium, in the seventh round of the Spanish League for the current season 2021-2022.

Defender Inigo Martinez scored the goal of Athletic Bilbao in the 69th minute, but Marcos Andre scored the equalizer for Valencia in the fifth minute of stoppage time for the match.

The bat team raised its score to 11 points to occupy the fifth place, and on the other hand, Bilbao’s balance rose to 10 points in seventh place in the Spanish league table, which is led by Real Madrid with 16 points.

Real Madrid will host Villarreal at nine in the evening, Saturday, at the “Santiago Bernabeu”.

The Atletico Madrid team suffered its first loss in the current edition of the Spanish League against Deportivo Alaves, with a clean goal, in the match that brought them together at noon, Saturday, at Mendezorosa Stadium, in the seventh round of La Liga.

Victor Laguardia scored the game’s only goal in the fourth minute of the first half.

Klopp: Mohamed Salah and Mane are the strength of Liverpool... and the whole team helps them