Van Gaal: The Netherlands are not a world team and lucky to draw Turkey 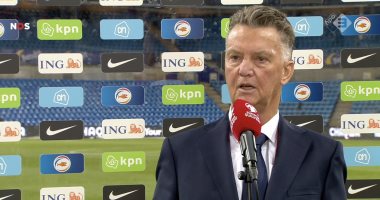 Dutch coach Louis van Gaal expressed his deep sadness over the disappointing tie that the team fell against Norway in the match that was held on Wednesday evening and ended in a 1-1 draw, at the “Waleval Stadium”, in the fourth round of the qualifiers. Europe qualifying for the 2022 World Cup in Qatar.

“We were not in our situation, and this is also due to the defense of the opponent, which is shrinking without spaces,” Van Gaal said in statements after the match.

Van Gaal added: “We had to be creative and solid on our balls, we lost the ball in unnecessary situations, none of the players were at his level today.“. And“I think De Vries played really well,” the Netherlands coach explained.

Louis van Gaal stressed: “The Netherlands is not a world team, we have to play as a team, Norway played really well as a team.” Van Gaal continued: “I think it’s too early to say we shouldn’t play 4-3-3, I’m just saying we were mediocre and ineffective on the wings.“. Van Gaal concluded: “Turkey drew, I’m very lucky, but if we don’t beat them, we don’t deserve to be top of the group.”