Vape use falls by 400,000 in 12 months – amid fears unfounded health worries are scaring people off

The number of vape users in Britain has dropped by 400,000 in just one year, according to campaigners.

The charity Action on Smoking and Health (ASH) blamed a misguided belief vaping is just as harmful as cigarettes for the fall.

In March, YouGov polling showed there were 3.2million e-cigarette users in Britain – down from 3.6million the year before, reported The Times.

It comes as an international evidence review showed e-cigarettes were 70 per cent more effective in helping smokers quit than nicotine replacement treatments.

Deborah Arnott, ASH’s chief executive, said: ‘About a third of smokers have never even tried an e-cigarette and less than 20 per cent are currently using one. 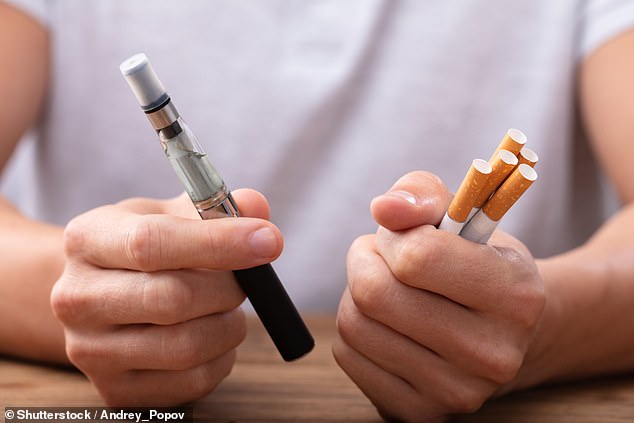 ‘If many more smokers could be encouraged to give e-cigarettes a go, the latest evidence indicates that many more might successfully quit.’

But only 39 per cent of smokers in Britain believe vaping is less harmful than smoking.

ASH wants healthcare professionals to encourage smokers to turn to e-cigarettes as a way to cut down on the habit.

Some 643,000 smokers in England quit in the 12 months to August – including the coronavirus lockdown. The year before the number was half that, at 307,000, according to the UCL Smoking Toolkit Study. 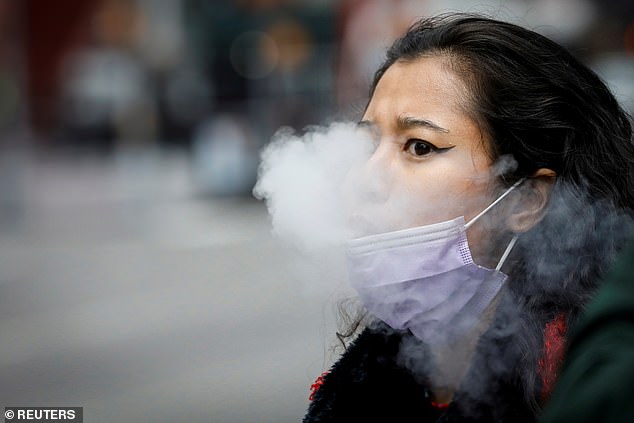 Caitlin Notley, from the University of East Anglia’s Norwich medical school, part of the review team, said: ‘This might be because e-cigarettes mimic the behaviour of smoking as well as providing nicotine to ex-smokers.’

In May, it was claimed vaping for only a short period of time can lead to the development of dangerous bacteria linked to significant health problems such as gum disease and even oral cancer.

Vaping causes significant damage to blood vessels in the same way as smoking traditional cigarettes, a study has found.

Blood vessels become stiffer and less effective in vapers and people who both vape and smoke, compared to non-smokers.

People who only inhale from cigarettes and do not vape also have the same issue of stiffening blood vessels.

Nicotine — the addictive substance in vapes and cigarettes — constricts blood vessels and over time this leads to a loss of elasticity.

Rigid arteries and blood vessels are known to increase a person’s risk of developing heart disease.

Researchers studied more than 400 men and women aged between 21 and 45 made up of non-smokers, cigarette smokers, e-cigarette users and people who both smoked and vaped.

The study, published in the Journal of the American Heart Association on Wednesday, found that former smokers who switched to e-cigarettes and dual users had arteries that were just as stiff as those in traditional smokers.

Bacteria thrives in the mouth of vapers and includes various infection-causing microbes similar to those found in the mouths of periodontitis sufferers.

After three months of daily use, scientists found a person’s mouth was a hotbed of microorganisms linked to tooth loss and, if left untreated, heart and lung disease.

The study from Ohio State University found the bacteria accumulates independent of the presence of nicotine.

The scientists leading the research, published in Science Advances, thought the culprit was the heated and pressurised liquids found in e-cigarettes.

Study senior author Professor Purnima Kumar from The Ohio State University said: ‘Vaping is such a big assault on the oral environment, and the change happens dramatically and over a short period of time.’

Even former smokers who had transitioned to e-cigarettes had more damaging bacteria present than current smokers who do not vape.

‘If you stop smoking and start vaping instead, you don’t move back toward a healthy bacterial profile but shift up to the vaping profile,’ said Professor Kumar.

‘Knowing the vaping profile is pathogen-rich, you’re not doing yourself any favours by using vaping to quit smoking.’

Among the participants in the study were first-time vapers aged between 21 and 35 who had been using e-cigarettes for between four and 12 months.

Researchers found the microbes triggered a response from the immune system which created a mucus-like slime layer.

This is part of a destructive inflammatory response, where the body’s immune system has been triggered by the invading bacteria and tries to fight it off.

As a result, the immune response can, in itself, cause damage to the body.

Proteins were also found which are created when the immune system is on standby to produce an inflammatory response. The scientists say this exponentially increases the likelihood of disease.

Debate over how harmful vaping is leads to confusion

E-cigarettes have the potential to benefit some people, by helping them quit smoking. But scientists still have a lot to learn about whether e-cigarettes are truly effective for quitting smoking and what the long-term risks are.

Nicotine is already known to be highly addictive and harm adolescent brain development, which continues into the early to mid-20s.

E-cigarettes produce an aerosol by heating a liquid that usually contains nicotine. Aerosol is inhaled into the lungs and can contain potentially harmful substances, including heavy metals like lead, volatile organic compounds, and cancer-causing agents.

US health officials, the Centers for Disease Control and Prevention (CDC), are investigating an outbreak of e-cigarette or vaping, product use associated lung injury (EVALI).

The mystery illness has swept across the states. Officials have identified Vitamin E acetate as a chemical of concern. THC is present in most of the fluid samples collected from the lungs of ill people, and most patients report a history of using THC-containing e-cigarette, or vaping, products.

‘Popcorn lung’ is the nickname for bronchiolitis obliterans, a condition which damages the smallest airways in the lungs and has been linked to people with vaping-related breathing problems. However, there’s no good evidence that e-cigarettes could cause the lung condition, according to Cancer Research UK.

The flavourings in electronic cigarettes may damage blood vessels in the same way as heart disease, according to research published in June 2018.

The chemicals used to give the vapour flavours, such as cinnamon, strawberry and banana, can cause inflammation in cells in the arteries, veins and heart.

They cause the body to react in a way that mimics the early signs of heart disease, heart attacks or strokes, the study by Boston University found.

Other recent studies have also suggested smoking e-cigarettes could cause DNA mutations which lead to cancer, and enable pneumonia-causing bacteria to stick to the lungs easier.

Researchers at New York University subjected human bladder and lung cells to e-cigarette vapor, which is marketed as being healthier than tobacco.

They found the cells mutated and became cancerous much faster than expected and mice exposed to the vapour also suffered significant DNA damage.

The vapour from e-cigarettes helps bacteria which cause the condition to stick to the cells that line the airways, they said.

The effect occurs with traditional cigarette smoke and those who are exposed to air pollution high in particulates from vehicle exhausts.

The team studied measures of blood vessel function in e-cigarette and dual users who had been using e-cigarettes for at least three months.