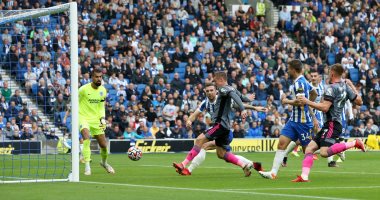 Jamie Vardy, Leicester City’s English striker, scored the 150th goal in his career with the “Foxes”, after he scored a goal in the fall of his team against its host Brighton, with two goals against a goal, in the confrontation that took place between them yesterday, Sunday, at the “Falmer” stadium, in the fifth round competitions. From the age of the English Premier League competition “Premier League” for the current season 2021-2022.

And the global network “Opta” reported that Jamie Vardy scored his 150th goal in all competitions with Leicester City, to occupy the fourth place in the list of historical scorers for the English club.

The network added that no player has scored more goals in the English Premier League since Brendan Rodgers’ first match with Leicester City than Jamie Vardy, with 50 goals equal to the Egyptian star Mohamed Salah, the Liverpool player.

Niall Maupai scored the goal for Brighton through a penalty kick in the 35th minute of the match, then Danny Welbeck added the second goal for the home team and the public in the 50th minute, before Jimmy Vardy reduced the difference with Leicester City’s only goal in the 61st minute of the match.

With this result, Brighton occupies third place in the English Premier League standings, after raising its score to 12 points, one point behind the two leaders Liverpool, Manchester United, who have 13 points each, while Leicester City came in twelfth place with 6 points.