Despite the economic cost, a majority of Australians believe Anzac Day should trigger a national holiday even if it means having a Monday off, like it would this year.

At the same time, most of us have seem to have no plans to attend services or events to mark the occasion.

An online survey of 1,038 Australians conducted by CoreData Research has found 82.5 per cent of respondents reckon this Monday should be a day off in all states and territories, even though Anzac Day falls on Sunday.

More than nine in 10 (90.8 per cent) said Anzac Day should always be a public holiday as a sign of respect to those who sacrificed their lives. 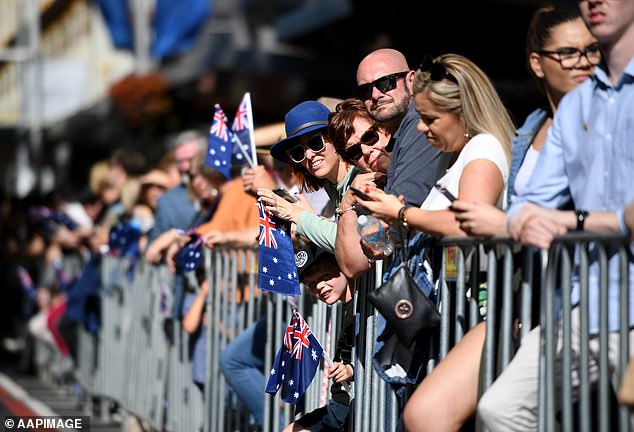 Despite the economic cost, a majority of Australians believe Anzac Day should trigger a national holiday even if it means having a Monday off, like it would this year

Even so, 36.6 per cent of those surveyed said they would be attending an Anzac Day service this year.

The research highlights intergenerational differences in attitude, with greatest support for a national holiday among Generation Z (aged 26 or younger) and Pre-Boomers (76 or over).

The strongest opposition registered among generations X and Y.

Support for a day off is strongest in WA and lowest in the Northern Territory, where April 26 is a public holiday but where fewer than six in 10 people apparently believe the rest Australia should get a break.

Even though the economic cost of a one-day national public holiday is estimated by CoreData Research at roughly $7 billion, more than 56 per cent of the people it spoke to still believe it’s worth it. 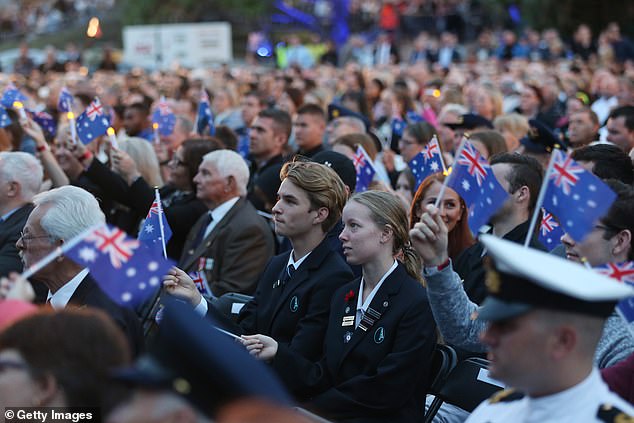 However, only 36.6 per cent of those surveyed said they would be attending an Anzac Day service this year

Slightly confusing is that a public holiday on April 26 will be observed in some states this year and not others.

The survey showed people from states where there is a day off are less likely to know it’s not a national occurrence. Only one in three West Australian respondents, for example, were aware.

NSW, Victoria, and Tasmania do not have a public holiday on Monday when Anzac Day falls on a weekend.

A year ago, Australians marked Anzac Day without marches for the first time since the Spanish flu hit in 1919.

This year, with the coronavirus largely contained, the parades are back and ceremonies will have crowds, albeit limited ones.

However, services in Western Australia’s Perth and Peel region have been cancelled after a hotel quarantine outbreak led to community transmission.

The two regions will be in the midst of a lockdown on Sunday, with state leaders encouraging people to mark the occasion in their driveways. 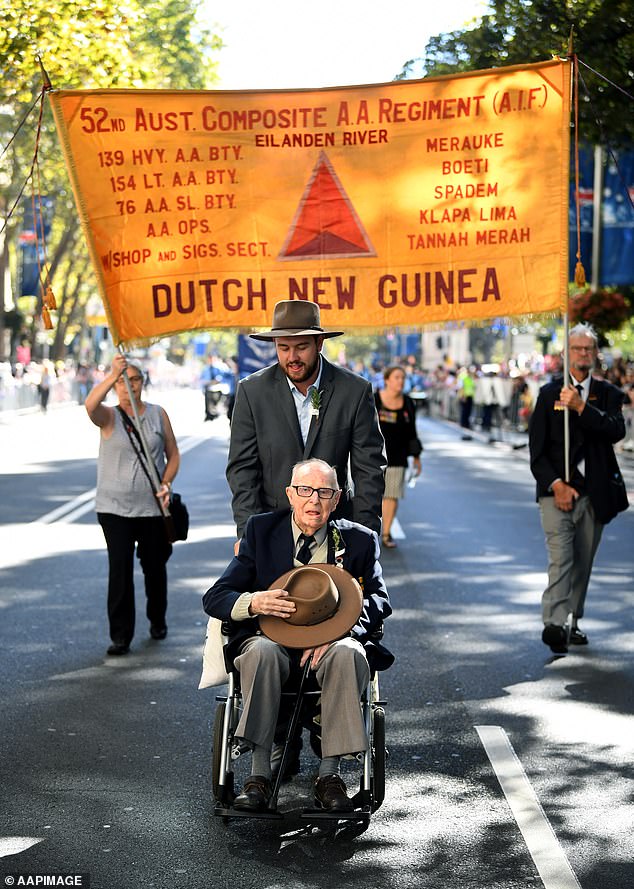 More than nine in 10 (90.8 per cent) said Anzac Day should always be a public holiday as a sign of respect to those who sacrificed their lives

Veterans’ organisations are encouraging other Australians to ‘light up the dawn’ in their driveways.

Sunday marks the 106th anniversary of the landings at Gallipoli.

The RAAF celebrates 100 years of service and the Royal Australian Navy, 110 years since it was granted the ‘Royal’ title by His Majesty King George V.

The Australian Army is recognising the two million Australians who have served, and continue to, under the Rising Sun Badge for the past 120 years.

‘Our armed services have loyally and courageously defended our nation for more than 100 years and I encourage all Australians to place our servicemen and women – past and present – at the front of our thoughts this Anzac Day,’ RSL national president Greg Melick said.

The Australian War Memorial has received approval from health authorities to hold the traditional dawn service and national ceremony.

This means 3,000 pre-registered ticket holders will be able to attend the dawn service and 4,200 for the national ceremony in Canberra. 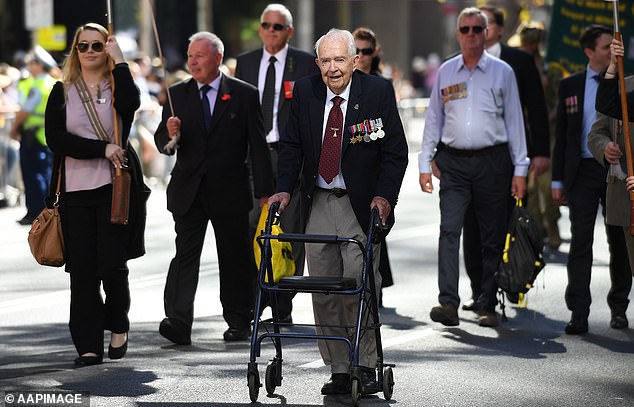 Veterans, descendants of veterans, members of the Armed Services, military bands and school children take part in the Anzac Day march in Sydney in 2019

The service will start with the playing of the didgeridoo by Flight Lieutenant Tjapukai Shaw, with Prime Minister Scott Morrison delivering the commemorative address.

The national ceremony will run from 10.30am to 12pm, with an address by Chief of Air Force Mel Hupfeld.

Those paying tribute at home are encouraged to stand at the end of their driveways at dawn, with a candle and radio or app for a synchronised playing of The Last Post, as occurred last year in the depths of the pandemic.

Royal Australian Navy veteran Grant Newham said his family had to rethink its commemorations during last year’s Covid-19 lockdown, taking part in Light up the Dawn.

‘(We stood) at the end of our driveway at dawn with a candle, listening to The Last Post,’ he said.

‘It was so different to what we’d done in the past but it turned out to be really special. Light Up the Dawn feels like a really inclusive and meaningful way to appreciate our past and present servicemen and women which is why we’ve decided to participate again this year.’

The RSL acknowledged some people still felt uncomfortable in crowd situations and plans to stream a digital dawn service at 6am through lightupthedawn.com.au

‘Regardless of how Australians choose to mark Anzac Day, the most important thing is to pause and reflect on those who served and those who made the ultimate sacrifice for the nation,’ Mr Melick said. 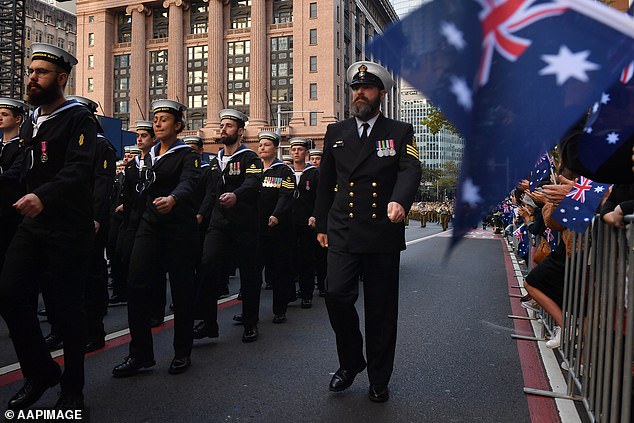 Governor-General David Hurley and Mrs Hurley are spending Anzac Day in the NT, attending the Darwin dawn service before travelling to Katherine for the parade and community reception.

In addition, the governor-general’s Anzac Day message will be broadcast on the ABC, focusing on the role families play in supporting serving men and women.

About 20,000 ADF personnel and cadets will contribute to activities, including the RAN ships HMAS Sheean and HMAS Armidale at the dawn service in Latrobe, Tasmania.

The day will still be recognised in these countries, however, with locally-based officials holding private commemorations.

Sinovac and Sinopharm – what do we know about the Chinese vaccines?

NHS Covid app has alerted 1.7million people to tell them to isolate since it was launched

Britain's daily Covid cases are down for the second day in a row, amid growing hopes...