These pictures reveal an eerie abandoned island where plague victims were once left to die in the Venetian lagoon – home of the world’s first quarantines.

The island of Poveglia has been deserted and closed to visitors for decades, its dilapidated hospital buildings frozen in time, its imposing fort now abandoned and its rumoured mass graves still hidden.

Its grisly past covers both the countless unknown plague victims thought to have died on the island and the lobotomies reputed to have occurred there when the hospital served as a mental asylum in the 1920s.

The island at the gateway to Venice was one of those used to shield the city from the plagues which wiped out millions over the centuries, most notably in the 1340s Black Death which killed as much as half of Europe’s population.

The word ‘quarantine’ originates from the Italian ‘quaranta’, meaning forty – the number of days for which ships had to remain at anchor when they arrived in Venice.

In a year when Venice and all of Italy have again been thrown into quarantine, two British explorers sneaked onto Poveglia to capture these rare images.

Plague island: An aerial view of the island of Poveglia in the Venetian lagoon, which was once used as a quarantine station where people suspected to have arrived with the plague would be sent to recover or die 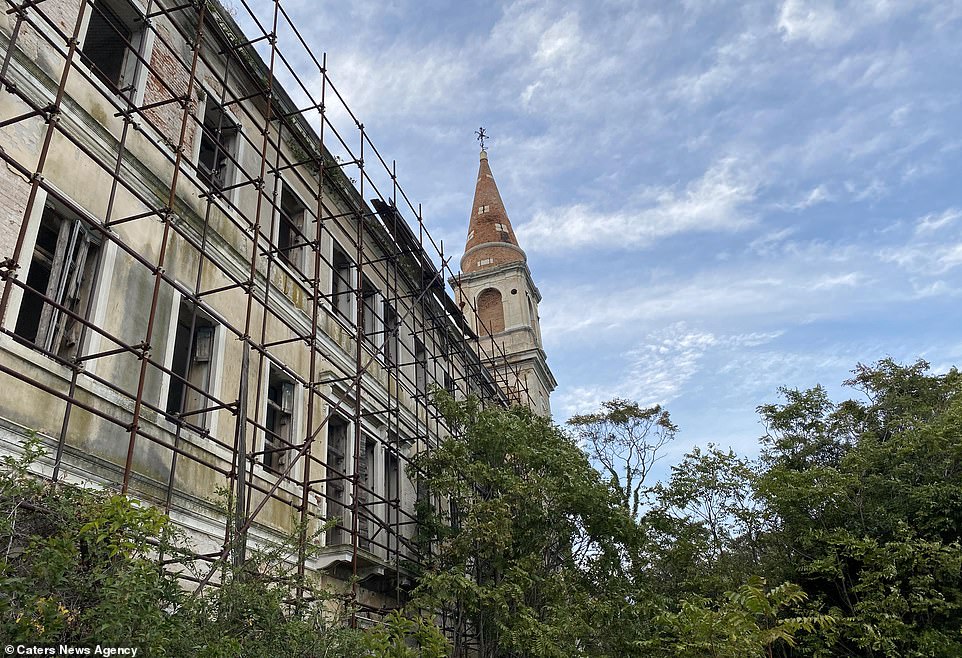 Abandoned: Long-forgotten scaffolding rusts on the side of a building with a bell tower on the island of Poveglia, which has been deserted and closed for decades after a mental asylum and nursing home on the island was closed 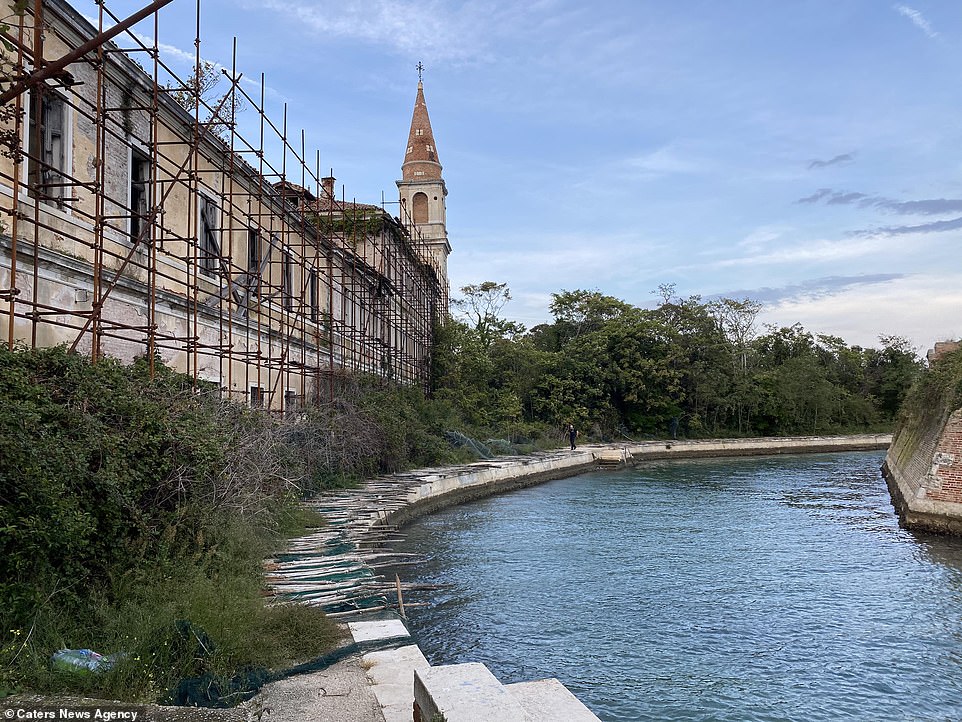 Eerie: The island’s grisly past covers both the thousands of plague victims thought to have died there and the lobotomies rumoured to have occurred there when the hospital served as a mental asylum in the 1920s

Venice first adopted a formal quarantine system during the Black Death which began in 1348, giving a council of three members the power to detain people and ships for 40 days.

Venice opened its first plague hospital in 1423, where people were sent to either recover or die.

The abandoned fort on Poveglia was built in the 17th century while the hospital buildings were from the 19th and the start of the 20th.

The fort was part of a plan initiated in 1645 to defend the city by fortifying the outlying islands and controlling the entrances to the lagoon.

By the 18th century, Poveglia was being used as a checkpoint for goods entering Venice – where suspected plague victims would be put in isolation.

Archaeologists on some of its neighbouring islands have found mass graves of plague victims – as well as burial items which showed how people blamed vampires for the deadly disease.

The threat from the plague gradually diminished over the centuries and by the 20th century the Poveglia hospital had been converted into a mental asylum.

Rumours of horrific lobotomies involving chisels and hand drills, carried out by a doctor reputedly driven to his death by ghosts, have added to the island’s allure.

According to legend, the doctor eventually committed suicide by throwing himself from a bell tower. 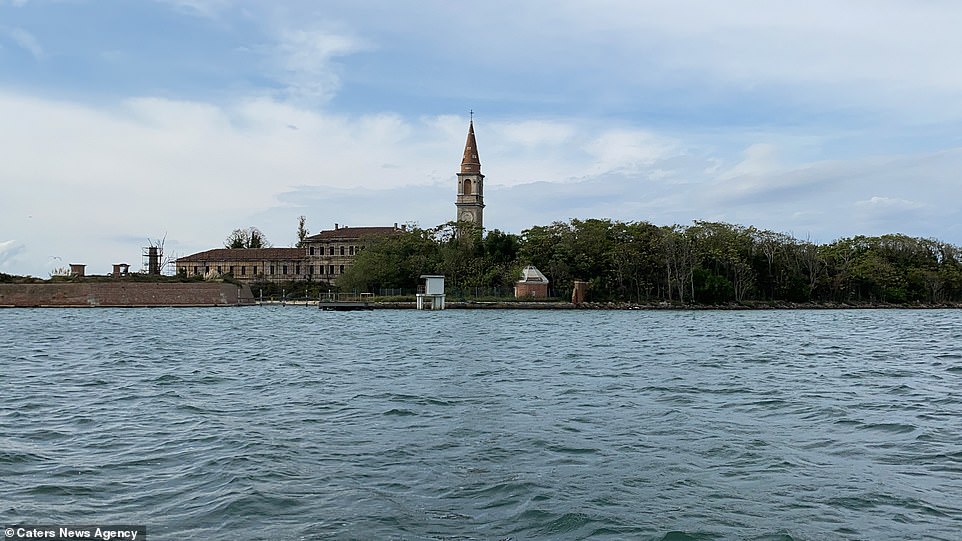 Isolation: The island of Poveglia from the water where Venetian rulers used outlying islands as a way of fending off the plague 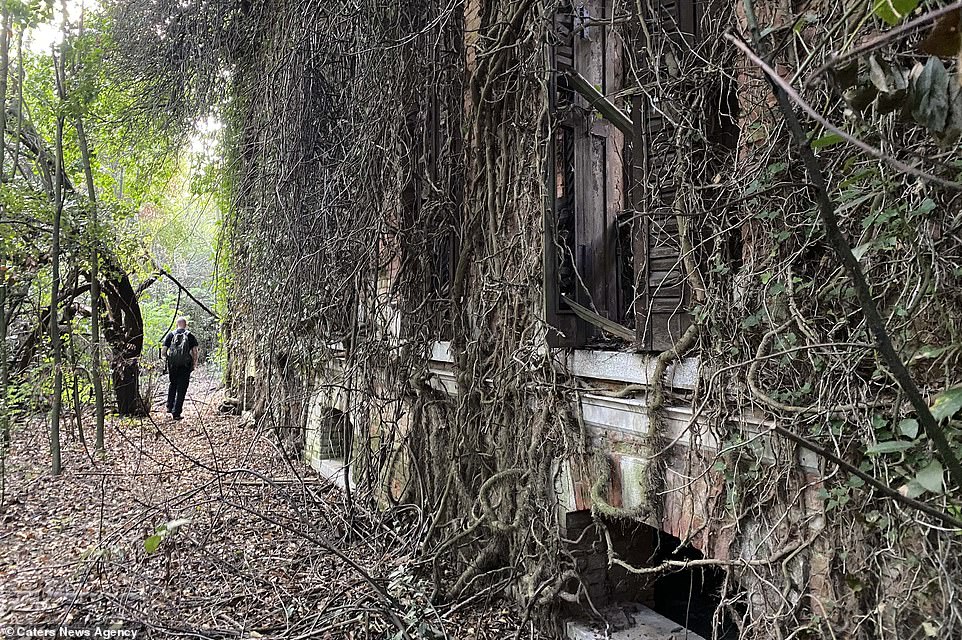 Overgrown: One of the British urban explorers walks by the the wall of a building which has been covered in plants in the decades since the former mental asylum was last used as a nursing home 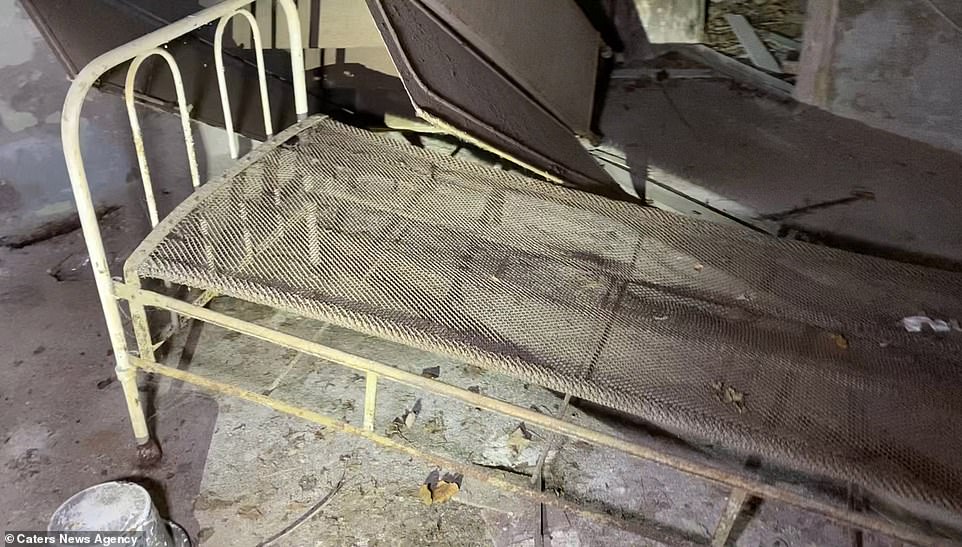 Eerie: A long-abandoned bed in one of the buildings on Poveglia, which was used to check new arrivals in Venice and to isolate suspected plague victims and prevent them bringing the disease into Venice 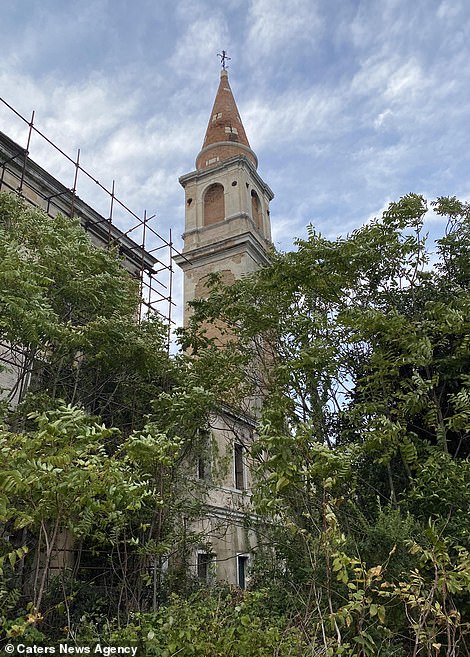 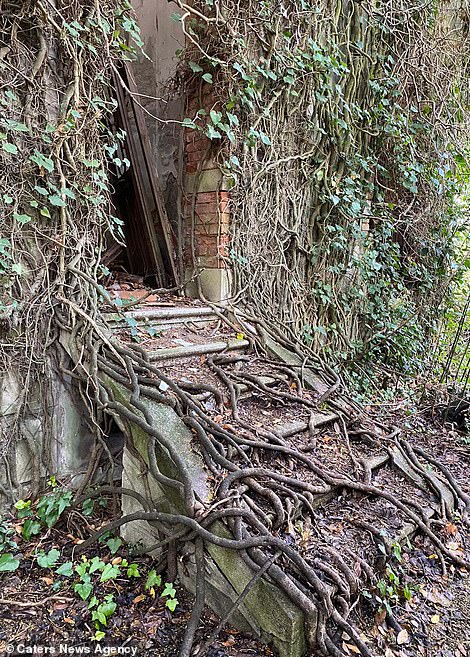 Secluded: A tower is partly obscured by trees (left) and a staircase is covered in vegetation (right) on the island of Poveglia where a fort was built in the 17th century to guard the entrance to Venice 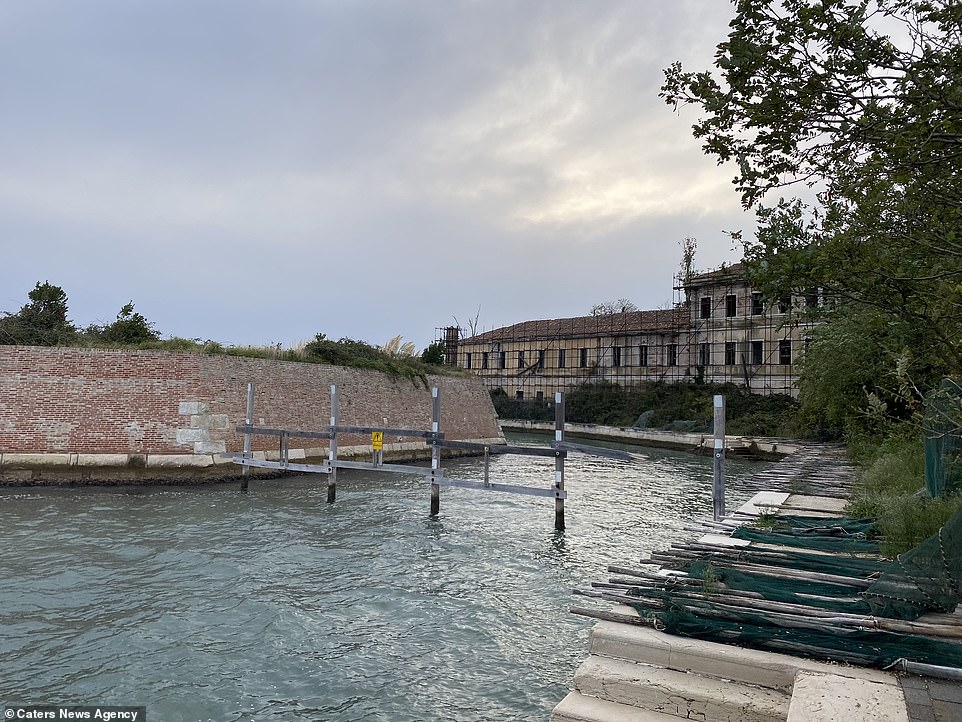 Approach: A view from the water of one of the buildings on the island of Poveglia – in the year which has seen Venice and all of Italy subjected to the same quarantines which were once designed to keep out the plague

The buildings are now full of collapsed roofs, overgrown floors and walls and missing parts of staircases, but still have an imposing aura when seen from the waters outside.

Italians have described Poveglia as ‘haunted’, but it has also attracted interest from developers in recent years.

In 2014 the island changed hands for £400,000 as part of an Italian government strategy to sell off unused property to address its budget crisis.

But a group of Venetians launched a campaign to protect the island from commercial development, calling themselves ‘Poveglia For Everyone’.

Now, British urban explorers Matt Nadin, 40, and Andy Thompson, 54, have shared the footage they took after sneaking into the most remote parts of the island.

Their images show the rotting abandoned buildings and eerie hospital beds which are still to be found on Poveglia, decades after the hospital – a nursing home at the end of its life – was shut in 1968.

Matt, a salesman from Sheffield, posted the footage to his You Tube channel, Finders Beepers History Seekers.

He said: ‘It was really, really eerie. You could tell even the taxi driver was scared, not just of the police but of the place itself, he couldn’t get away quick enough.’ 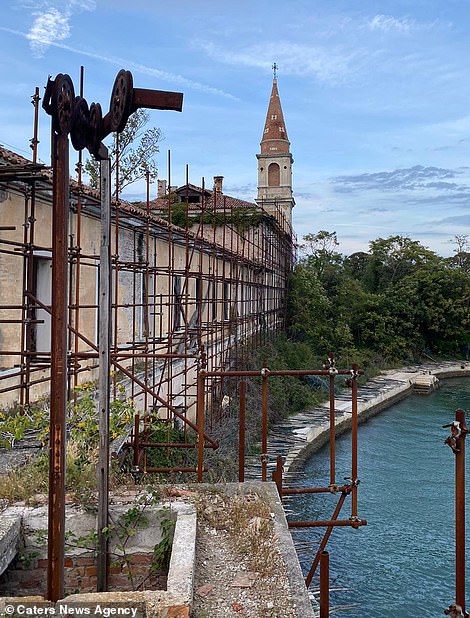 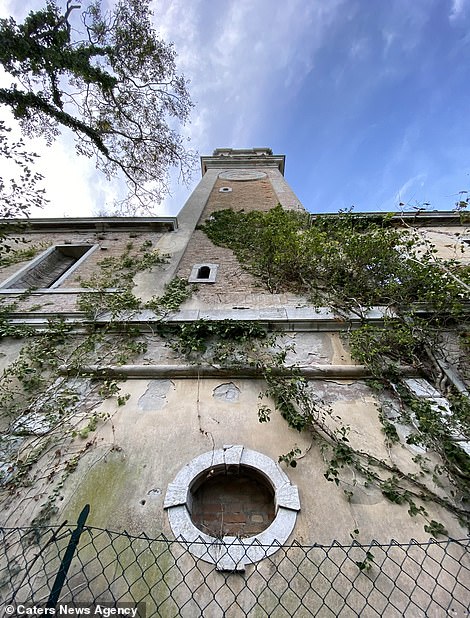 Closed off: Scaffolding on the side of the building (left) and a view from the foot of a tower (right), with legend having it that a sadistic doctor on the island once jumped to his death from a tower after being driven mad by ghosts 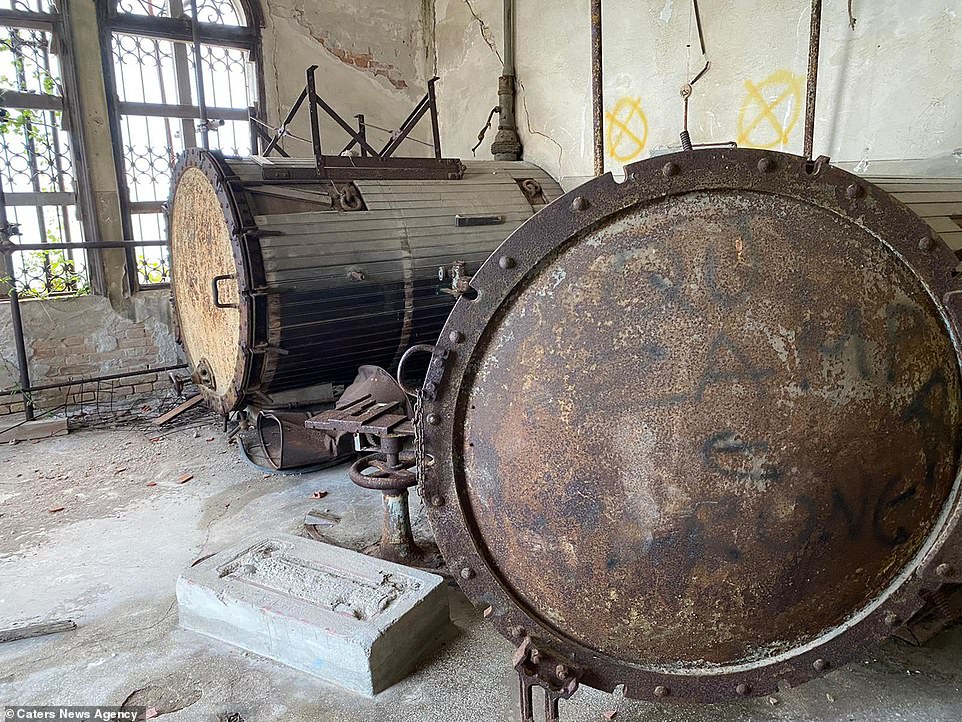 Furnace? Two long-abandoned barrels inside a building, which rumour has it could have been used for burning bodies 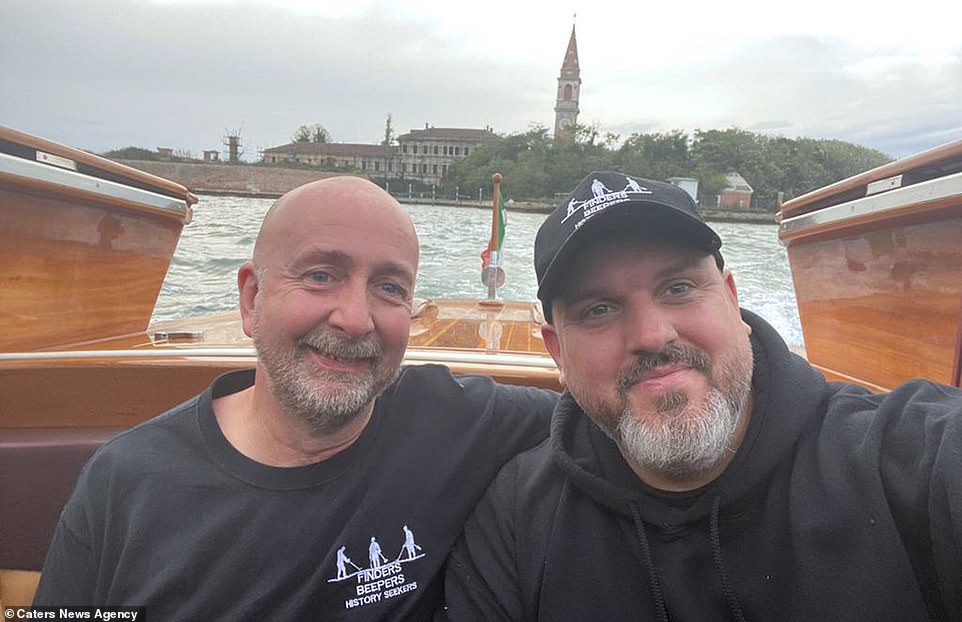 Urban explorers: Andy Thompson and Matt Nadin in a Venetian water taxi after their visit to the supposedly closed island

Discussing the island’s mythology, Matt said: ‘The island is so full of dark, dark history, a hell of a lot of people died there and you really get a sense of the horrors that took place there while you’re walking around.’

He continued: ‘They burned all the bodies and left them where they lay. The island has never really been cleared properly or anything so everything has just been left.

‘Later on, when it was turned into an asylum, because people were shoved there out of the way of prying eyes, they started to do experiments on them, horrible, horrible stuff.

‘Whilst we were there, we heard the bell toll and that was quite spooky, that did actually freak me out a little bit. It was like an omen or something.

‘The whole place was just really weird and eerie although you could tell from the tiles and the archways it would have been a beautiful building originally.

‘You could see that hardly anyone had set foot there for years because there is no graffiti or anything it’s all just natural decay.

‘Nature has really taken over and it was really typical of a horror movie with all the vines and creepers.

‘Definitely an experience I won’t forget in a hurry.’