‘Very annoying Asians’: Outrage as disgusting message is left on customer’s receipt at a restaurant

‘Very annoying Asians’: Outrage as vile message is written on a receipt to describe diners at a restaurant – as Snapchat post exposes how manager APPLAUDED his staff’s behaviour

A popular restaurant has come under fire after a staff member wrote ‘two very annoying Asians’ on a receipt to describe a young couple dining at the eatery.

The docket was posted on social media this week after the customers ordered a chicken croissant and fish cocktails at the venue in the heart of Brisbane‘s CBD.

In the Snapchat post showing the receipt, a manager of the restaurant responded with ‘OMG I love my staff’, followed by series of laughing emojis.

When quizzed by furious staff members about the description of the customers, the man, believed to be the restaurant joint owner, told them to ‘get a grip’ and that ‘it was just a joke’. Staff members called out the manager, who responded by saying ‘give it a rest’

A staff member responded by telling the manager the conduct was ‘unprofessional and inappropriate’ and that it was his ‘job to call out behaviour like that’.

‘I personally wish to apologise for the offence and hurt caused,’ he said.

‘I’ve been a business owner in the area for more than six years, personally and professionally invested in diversity.

‘I’m deeply disappointed and embarrassed at my actions as they go against everything I pride myself on.

‘Internally, my team and I will do better to ensure we uphold the diversity and inclusivity that is at our core.’

It comes after another Brisbane restaurant was accused of racism after releasing a takeaway menu offering a ‘Wuhan burger’ and ‘bat wings’.

Japanese eatery Nobunaga Yakitori launched the menu after the Queensland government had banned dine-in service to slow the spread of the coronavirus at the time.

The ‘virus-free menu’ was slammed by some customers, who accused the restaurant of being racist for making light of the supposed Chinese origin of the deadly pandemic. 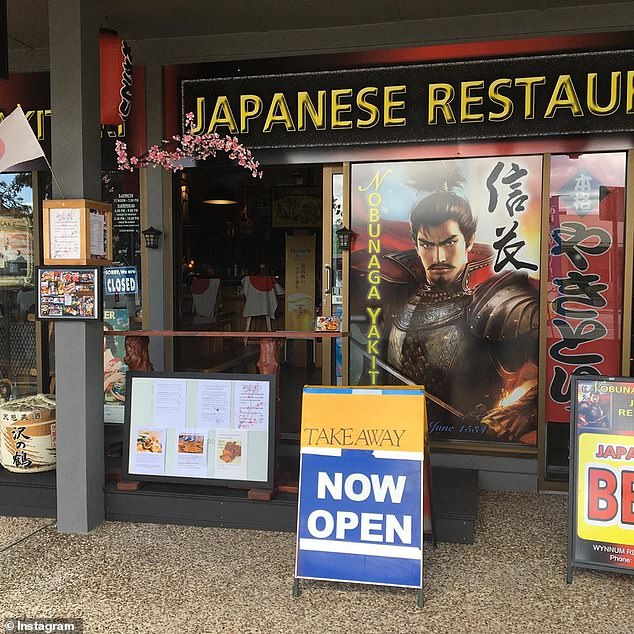 Brisbane Japanese restaurant Nobunaga Yakitori came under fire in 2020 after releasing a takeaway menu offering a ‘Wuhan burger’ and ‘bat wings’ – it was at the height of the pandemic, which China was accused of starting after a man ate bat soup at a market

The controversial menu featured a $16 ‘Wuhan Burger’ with ‘flame grilled bat’ – which is actually chicken – with wasabi mayo, lettuce and avocado.

It also featured ‘bat wings’ – which are actually chicken wings’ – with ‘China Sea salt’ for $6 a piece.

Coronavirus is believed to have originated from Wuhan, the capital city of Hubei in China, after a person ate bat soup at a wholesale animal market.

When he was accused of being insensitive, the owner of the Brisbane restaurant declared ‘it was an attempt to add humour’ in what was a challenging and unprecedented time for many.

Can YOU spot the budget Easter decorations among the luxury options?

Rania Youssef explains how “kisses” are filmed in Egyptian cinema

Coronavirus: ‘I quit my job to home school my son’