Fears are mounting Victoria could break its Covid-19 free spell after a test came back with an ‘indeterminate result’.

Department of Health and Human Services took to Twitter to make the announcement on Sunday.

‘DHHS received a notification of an indeterminate result last night,’ the tweet read.

‘Follow up tests are underway and precautionary public health actions are being taken. There will be an update on the case later today.’

It is 25 days since Victoria last had a new confirmed local case. 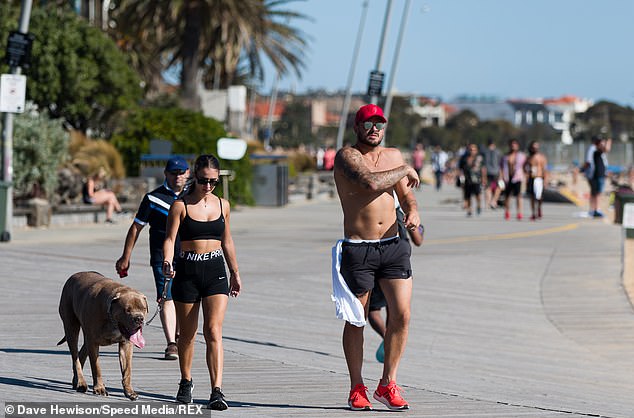 It has been 25 days since Victoria last had a new confirmed local case (pictured, people exercising at St Kilda Beach)

There are now 20 active cases and there were 10,681 test results to midnight on Saturday.

Meanwhile, the state government has issued more than one million travel permits since virus border restrictions were imposed just over six weeks ago.

As of late Saturday 1,014,787 permits had been granted for travellers to enter Victoria, an average of almost fifteen permits for every minute of every day since restrictions were imposed on December 16.

More than 20,000 applications were received in the 24 hours to Saturday evening.

But while plenty of visitors are being granted permits to enter the state, authorities have detected evidence of virus fragments at six different locations, including the popular tourist towns of Cowes on Phillip Island, and Castlemaine in the northwest.

Fragments have also recently been found in wastewater at the satellite Melbourne suburb of Pakenham, rural Gisborne, Hamilton in the state’s southwest and the South Gippsland town of Leongatha.

The health department is urging residents and visitors to these locations to get tested if they have even mild symptoms.

On Saturday, the WA government announced Victorians can travel to WA quarantine-free from next week.

Meanwhile Victoria’s chief health officer will allow up to 30,000 people to attend the Australian Open in Melbourne each day, about half the usual attendance numbers.

The last players and participants still in the hotel quarantine system are expected to leave on Sunday.

Fabrics from the era of King David discovered in Israel (photos)