Victoria was inflexible and initially overreacted to Covid only to destroy all the sacrifices with a botched hotel quarantining program, a report has found.

Coronavirus has so far killed 908 people across Australia, a figure that is low by international standards with just 35 deaths per million.

More than 90 per cent of those deaths, however, were in Victoria with 820 fatalities despite Labor Premier Daniel Andrews later imposing some of the world’s strictest lockdowns, including a curfew.

Despite having Australia’s strictest Covid rules, the initial sacrifices imposed in March were all for nothing as a result of a ‘disastrous’ hotel quarantining program. 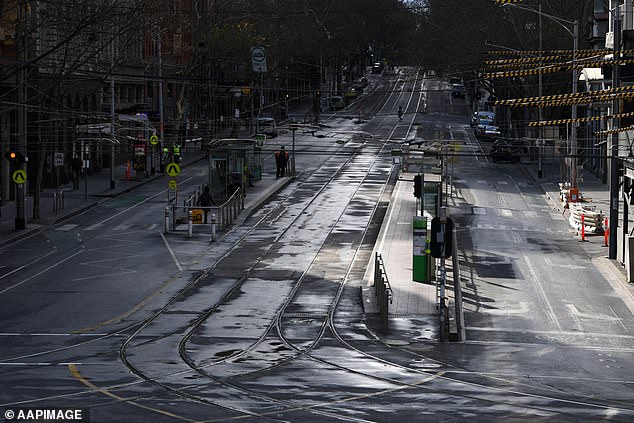 Victoria was inflexible and initially overreacted to Covid only to destroy all the sacrifices with a botched hotel quarantining program, a report has found. Pictured is Melbourne’s normally busy Bourke Street on August 12, 2020 during the Stage Four lockdown

The Centre for Independent Studies, a conservative think tank, said the hotel quarantining bungle and bad contact tracing showed how Victoria was unable to adapt to a health crisis.

‘The hotel quarantine disaster is the clearest example of how a lack of clear responsibilities and accountability can lead to negative outcomes.’

Victoria has also been home to 20,345 or 73 per cent of Australia’s 27,993 Covid cases due mainly to a botched Melbourne hotel quarantining program for returned travellers, which saw private security guards spread the disease to large families in the city’s north and west.

The CIS said Victoria was an example of a state that initially overreacted to the COVID-19 pandemic, despite Prime Minister Scott Morrison’s National Cabinet recommending a measured approach.

‘Victoria is a case study in being non-adaptive and inflexible — breaking the COVID-19 Response Plan’s commitment for measures to be flexible, scalable, and “proportionate to the risk associated with the current disease”,’ it said. 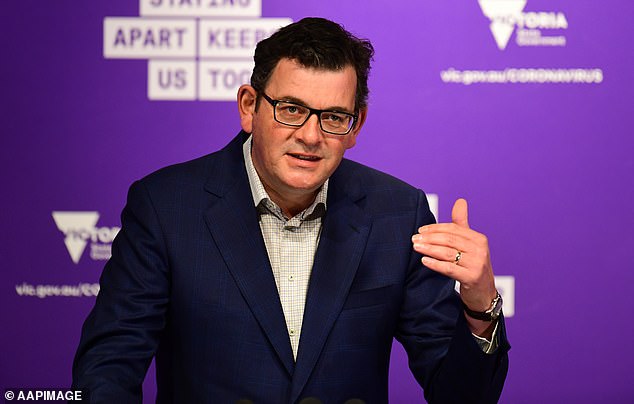 Victoria is home to more than 90 per cent of Australia’s Covid deaths despite Labor Premier Daniel Andrews later imposing some of the world’s strictest lockdowns, including a curfew. The Centre for Independent Studies said many of the decisions were political

Victoria was also harsher on civil liberties early on in the pandemic, with 17-year-old learner driver Hunter Reynolds in April fined $1,652 for having driving lessons at Frankston, south-east of Melbourne during the Stage Three lockdowns.

Despite the harsh restrictions, in July 36 Melbourne suburbs – including the housing commission areas of Flemington and North Melbourne – were placed into a strict lockdown where residents were banned from leaving home except to exercise, buy foods or medicines or visit a doctor.

At the time Treasurer Josh Frydenberg, who lives in Melbourne, revealed Victoria’s metropolitan lockdown in the city’s north and west would cost the economy $1billion a week.

Treasury updated that estimate by the end of July, estimating Melbourne’s lockdown would cost the national economy $3.3billion a week. 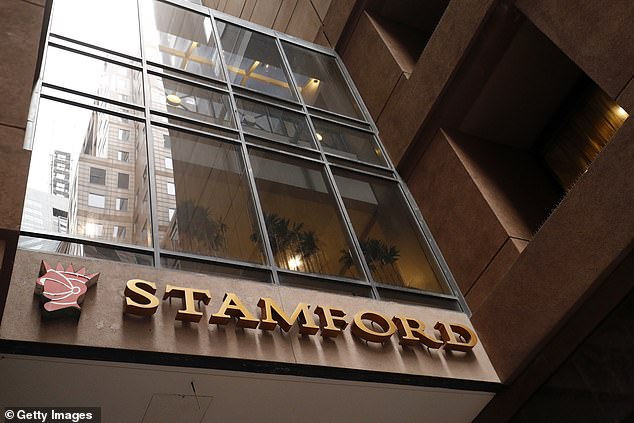 By August 2, all of Melbourne was placed into a strict Stage Four lockdown with an 8pm to 5am curfew.

‘Victoria introduced measures such as curfews, which have no scientific basis as a virus suppression method,’ the CIS study said.

‘Additionally, the decisions made by Victoria appeared to focus more on politics than evidence.’

To avoid the mistakes of 2020, the CIS concluded decisions on containing a virus needed to be assess the costs of imposing economically-crippling restrictions.

‘Interventions — especially when they are severe enough to shut down the economy, destroy businesses, life savings, and jobs, and place people under virtual house arrest — need to be soundly justified,’ it said.

She is due to deliver her findings on December 21.

Lakers' LeBron James will never be comfortable playing in empty arenas. 'The fans are a part of this game'

Mother and her disabled son, 3, face residing in her automotive after ‘landlord virtually doubled hire to $800’