So the Angels of Victoria’s Secret, wobbling precariously on their killer stilettos for some years, have finally fallen.

They will be replaced, according to a company announcement this week, with a ‘culturally relevant’ group of seven women who will form the ‘VS Collective’.

Their mission? As newly appointed brand ambassador Megan Rapinoe, 35, a pink-haired soccer superstar and LGBT advocate, put it bluntly this week, to address a culture which was ‘patriarchal, sexist, viewing not just what it meant to be sexy but what the clothes were trying to accomplish through . . . what men desired. And it was very much marketed toward younger women’.

That message, she added, was ‘really harmful’.

Surely, though, it’s more a case of reversing a decade of bad PR and falling sales in a breathtakingly cynical marketing exercise. 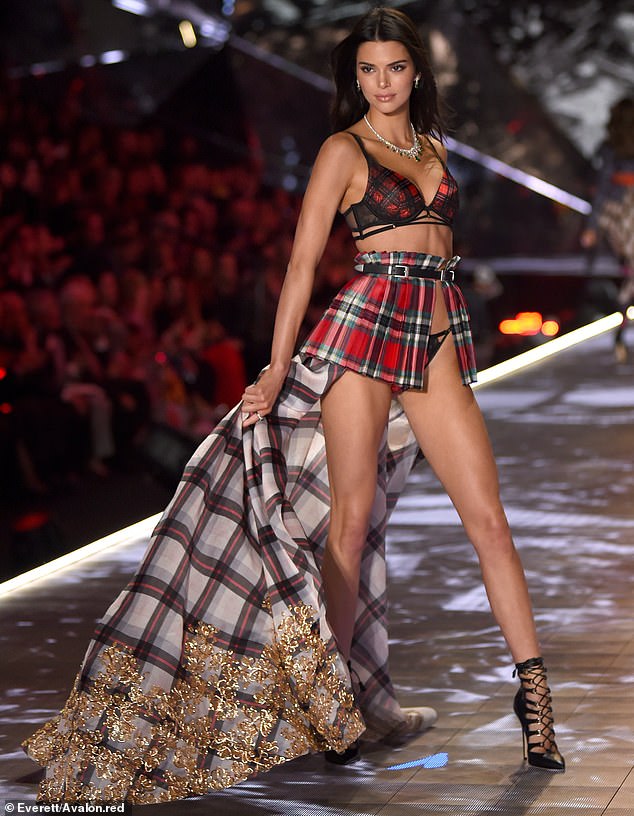 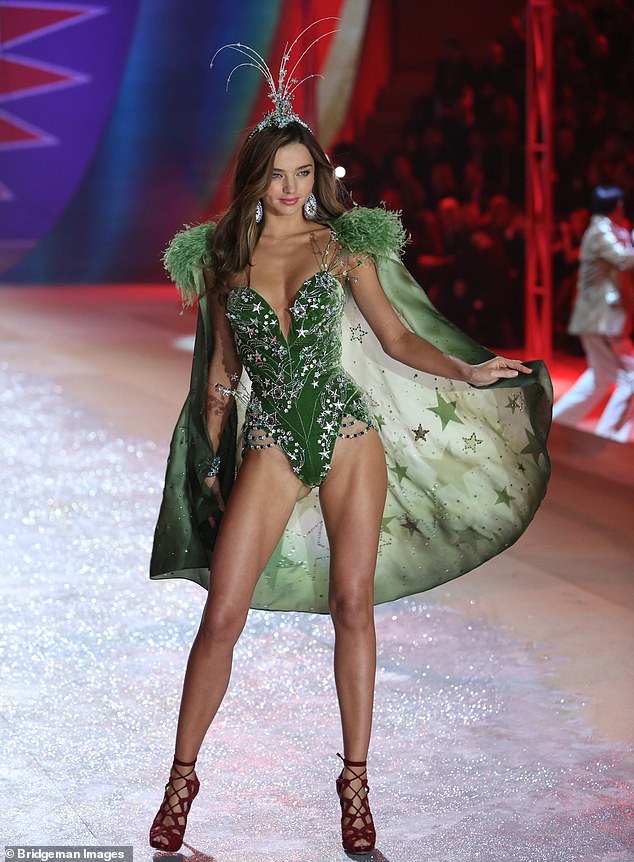 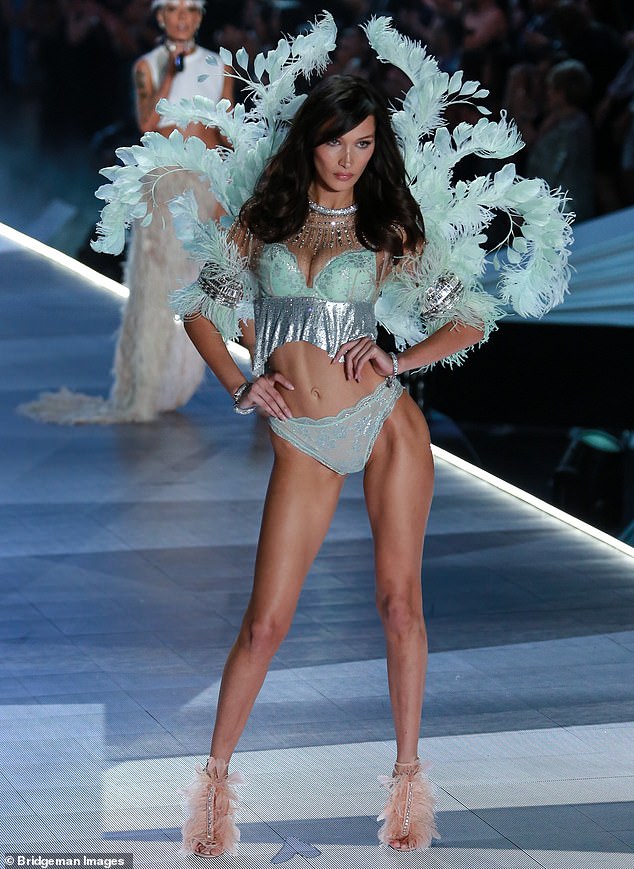 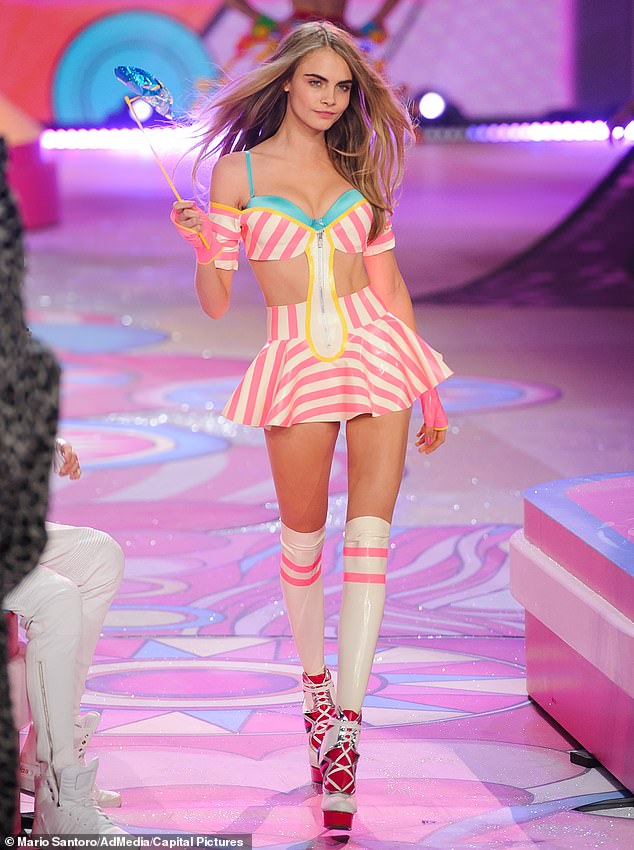 There was a time when I could look at a bevy of beautiful supermodels sporting giant wings and skimpy underwear and simply smile at the ludicrous spectacle. Harmful? It never struck my mind.

To me, they were alien creatures with their pert breasts, tight butts, endless legs and spray-on tans, but they didn’t make me feel bad about myself, because in the same way as I don’t feel worthless because I don’t have the brains to become an astrophysicist, neither do I feel without value because I don’t have the looks to bare almost all on the catwalk.

But then along came #MeToo, and revelations of bullying and sexism in the rarefied VS firmament, as well as exposure of demands for the models to half-starve themselves before the annual shows that were broadcast around the world. 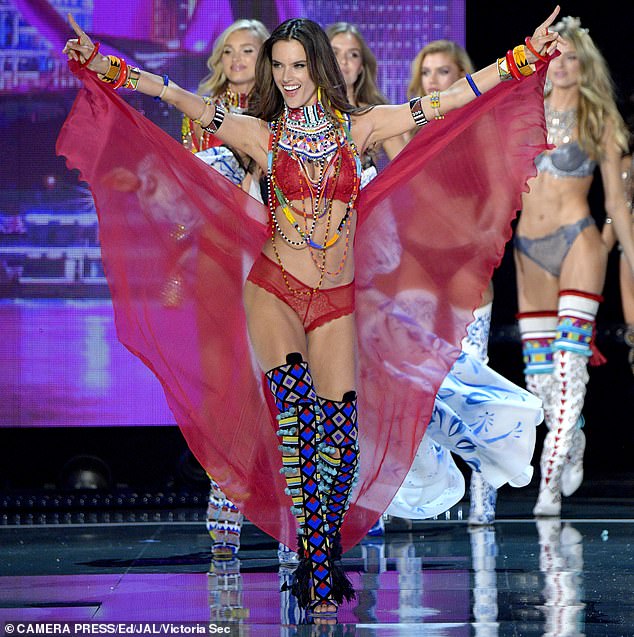 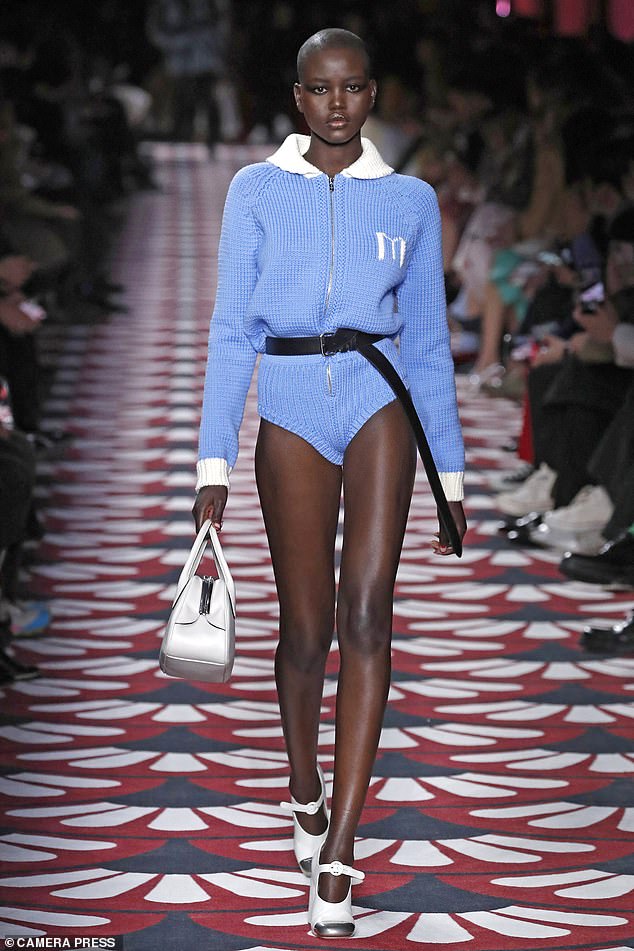 Also included in the right-on collective are model and South Sudanese refugee Adut Akech (whom Meghan Markle put on the cover of Vogue when she was guest editor), 21

And to cap it all, the revelation of a close connection between the recently resigned CEO Leslie Wexner and convicted sex abuser and paedophile Jeffrey Epstein, who was his financial adviser.

The carnival that rolled into town on a bed of feathers, rhinestones, glitter and flesh and customers willing to pay up to $15,000 for a ringside seat, began to look like the sad and faded fairgrounds we see on bank holiday weekends.

As virtue-signalling goes, the line-up of new ambassadors gets full marks.

First up Priyanka Chopra-Jonas, 38, the fabulously talented and wealthy Indian actress, singer and film producer, with 64.5 million Instagram followers and credentials as an environmental and women’s rights campaigner.

Also included in the right-on collective are model and South Sudanese refugee Adut Akech (whom Meghan Markle put on the cover of Vogue when she was guest editor), 21, as well as Chinese freestyle skier Eileen Gu, 17, and British former TV presenter Amanda de Cadenet, 49, whose #Girlgaze platform connects ‘women and non-binary creatives with business and brands’. 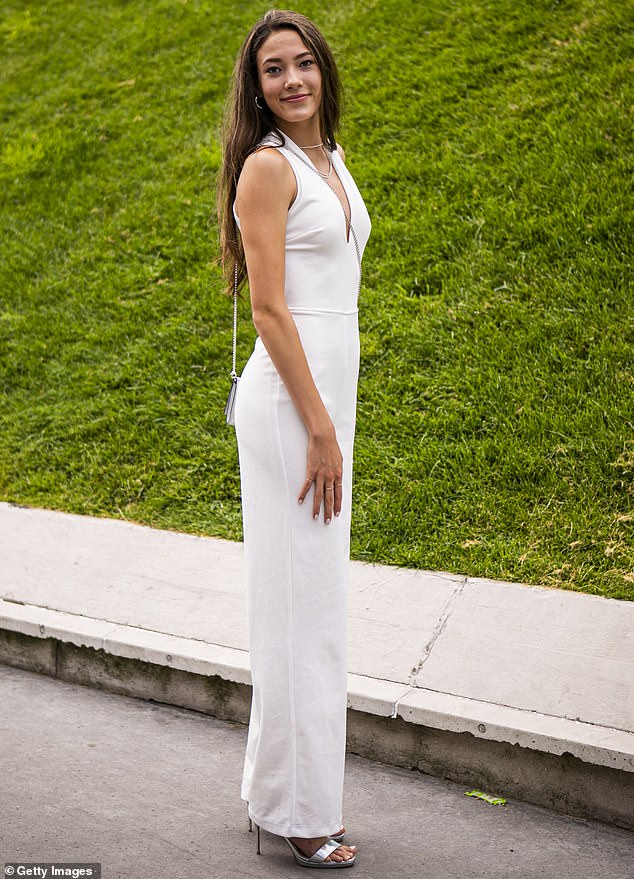 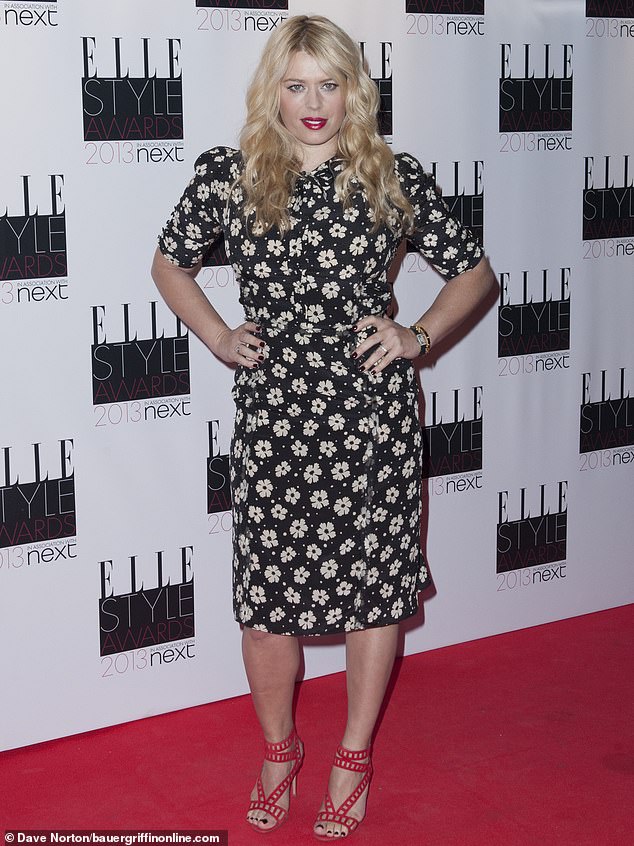 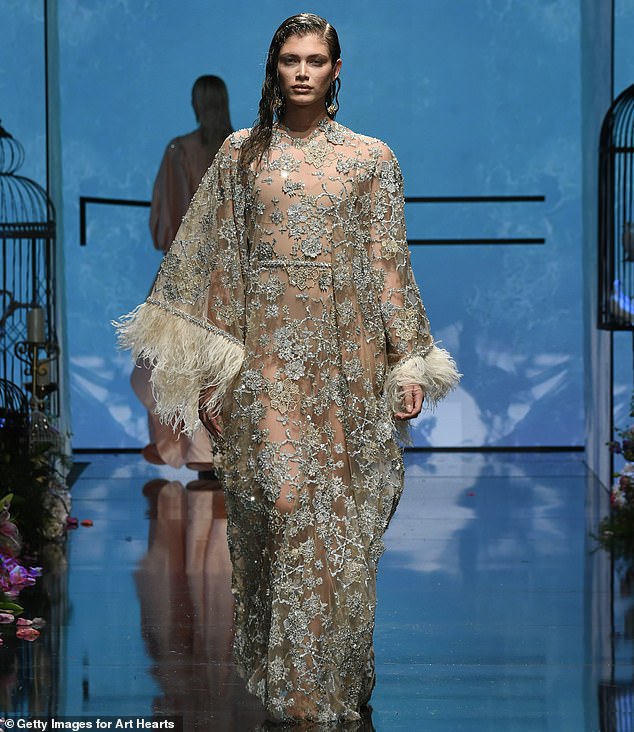 To round off, mixed-race, plus-size model and inclusivity advocate Paloma Elsesser and Brazilian trans model Valentina Sampaio (pictured), both 29

To round off, mixed-race, plus-size model and inclusivity advocate Paloma Elsesser and Brazilian trans model Valentina Sampaio, both 29.

That these are admirable women, all of whom are terrific female role models, I do not doubt.

But I have no interest in whether any of them define themselves as gay, straight or anything else, because I can’t see how it’s relevant to the underwear I choose to buy. Breasts need bras, regardless of where you are on the gender spectrum.

And quite what any of them are doing promoting the re-modelled Victoria’s Secret is mystifying.

Big pay cheques are bound to be part of the allure, and perhaps it’s a way to highlight their pet causes, but I still fail to understand why they need to do it in the realm of women’s underwear. 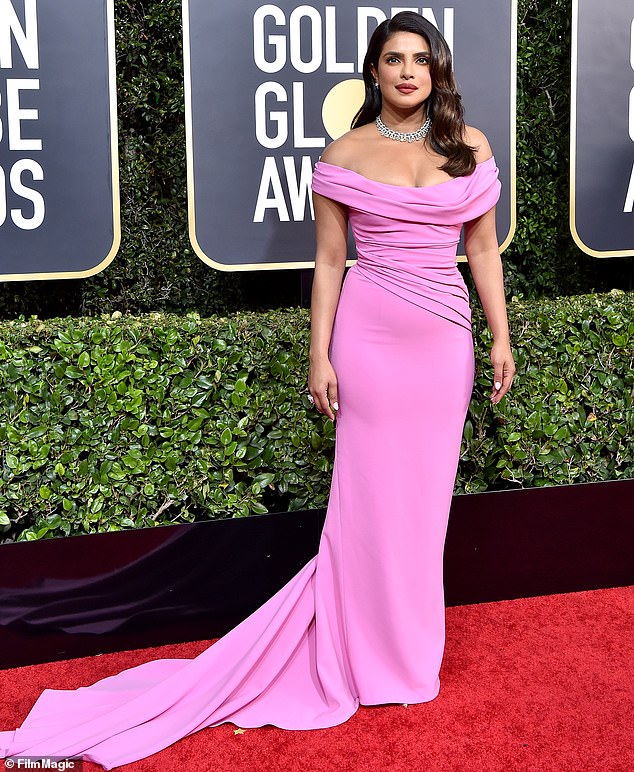 First up Priyanka Chopra-Jonas (pictured), 38, the fabulously talented and wealthy Indian actress, singer and film producer, with 64.5 million Instagram followers and credentials as an environmental and women’s rights campaigner 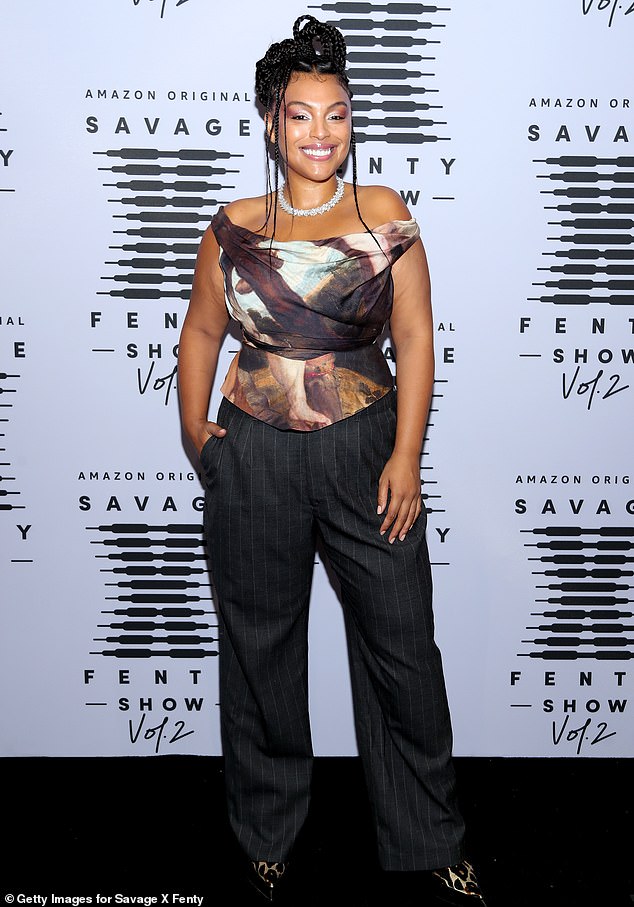 The marketing folk must have spent ages trying to find a woke enough word to describe this gathering of spokeswomen.

It must have been a real Eureka moment when someone came up with the word ‘collective’, suggesting not just a group of females but women united with a common desire to work together to achieve a common goal. In this case, to reinvent beauty standards for women. But why not be honest and admit that, ultimately, for all the new podcasts and right-on initiatives to come, the true goal is to sell more knickers in a company that has been teetering on the financial edge for years.

For surely we can see through this re-branding as easily as our slavering menfolk could see through some of Victoria’s Secret’s most transparent knickers?

The VS Collective screams more of tick-box culture than anything else. Me Too, tick. Black Lives Matter, tick. Gender inclusivity, tick; ageism, tick; sizeism, tick. 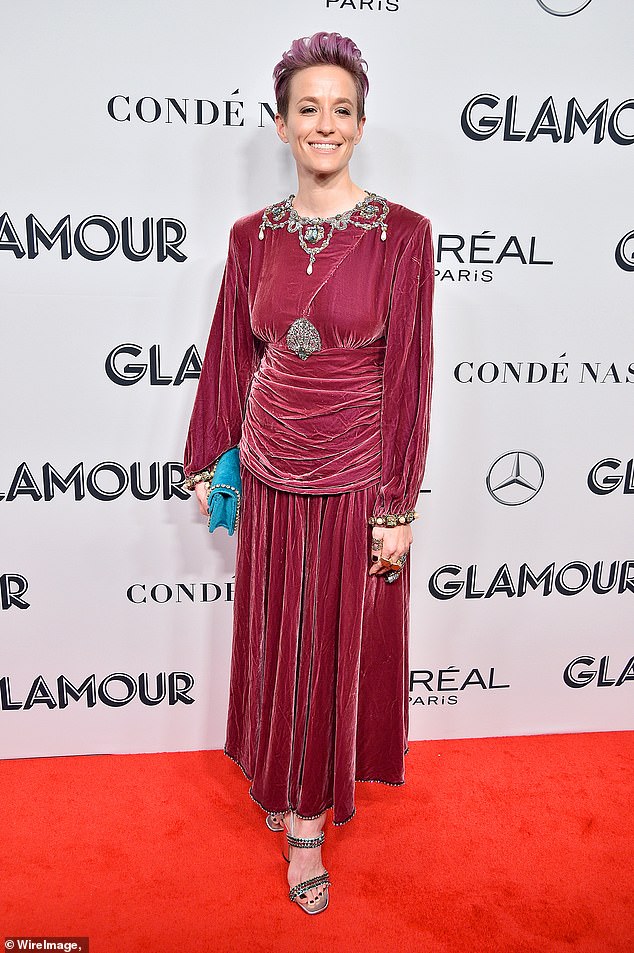 Megan Rapinoe attends the 2019 Glamour Women Of The Year Awards at Alice Tully Hall on November 11, 2019 in New York City

It’s a stunning volte-face, but is this what women today really want when it comes to bras and panties? Or might a better fit and some quality fabrics be what the female consumer needs?

You can’t blame Victoria’s Secret for wanting to do something, anything really, to shed the toxic image of the past few years.

When the company was founded in 1977 by U.S. businessman Roy Raymond, his aim was to create boudoir lingerie shops that were ‘man-friendly’. The name reflected Victorian primness, with the word ‘Secret’ suggestive of the hidden treasures underneath the clothes. In 1982, he sold the company to clothing magnate Les Wexner for $1 million.

Over time, hundreds of stores opened across the U.S., but it was the first overtly sexy catwalk show, staged at New York’s Plaza Hotel in 1995, when things took off. Newsweek described the show as ‘a combination of self-assured strutting for women and voyeuristic pleasures for men’, and it turned lingerie into mainstream entertainment.

Soon it was being broadcast to 185 countries. Supermodels from Naomi Campbell and Helena Christensen to Bella Hadid and Kendall Jenner took part.

It wasn’t until 2008 that Victoria’s Secret went international, with a flagship store opening in London’s Bond Street in 2012. But sales began to take a dent around 2016, coinciding with a growing preference for athleisureware.

Then the real nasty stuff began to emerge. Adriana Lima, the brand’s longest-serving model, revealed that she would cut out solid food nine days before an appearance. Many models didn’t drink fluids, either. Dehydration was described as a massive problem before shows.

How those poor girls held up those feathers weighing up to 30lb, I have no idea.

In 2020, a New York Times investigation showed that Mr Wexner and his former chief marketing officer, Ed Razek, presided over an entrenched culture of misogyny, bullying and harassment.

The UK arm was struggling even before the expose, racking up a £170 million loss in 2019, as customers turned against its hyper-sexualised marketing. It crashed into administration last year after sales collapsed in the first lockdown. But despite all of this and despite VS’s share of the U.S. women’s underwear market dropping to 21 per cent last year from 32 per cent in 2015, according to Euromonitor International, it can still claim $5 bn in global sales. There’s life in lingerie yet.

Little wonder the brand is so desperate to move with the times — last month it featured a Mother’s Day campaign, a pregnant model and announced it will soon begin selling nursing bras — however late in the day.

After all, it was back in 2004 when cosmetics company Dove launched its first Real Beauty campaign, featuring women of various shapes and sizes in their underwear. Only now, 17 years later, are VS finally beginning to wake up.

I can live without the feathers, that’s for sure, but I shall miss those Angels all the same, as those now outdated beauties are sacrificed to the cultural collective.