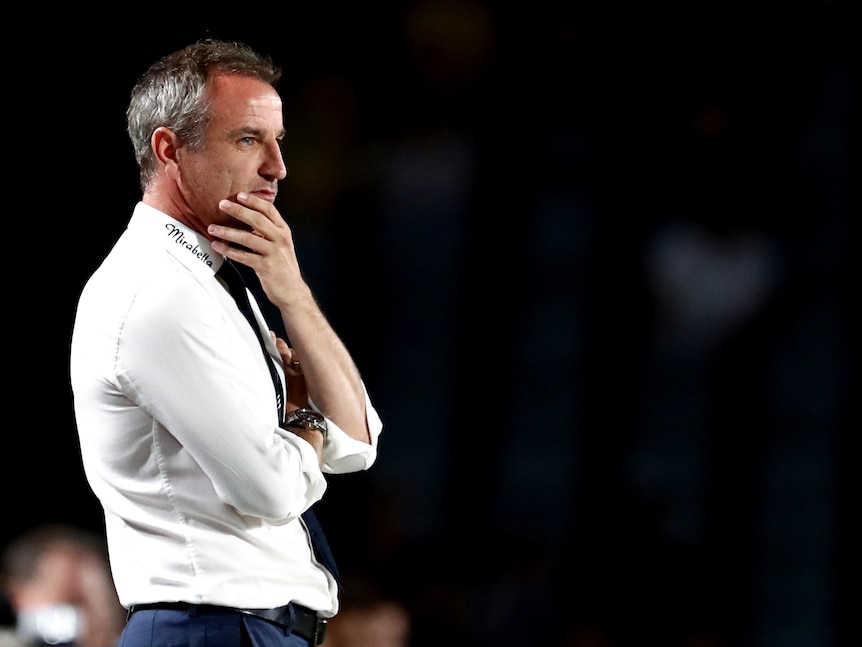 A 6-0 thrashing by crosstown rivals Melbourne City did not do it, but a 7-0 hiding from the same team has ended Grant Brebner’s troubled time as Victory coach.

The once-proud Victory confirmed within hours of Saturday night’s second record mauling this season by City that Brebner’s 16-match stint as head coach was over.

The writing was on the wall after Socceroo striker Jamie Maclaren scored five goals at AAMI Park as City romped to the top of the ladder in emphatic fashion.

“It is in the best interests of everyone involved — the club, Grant as a person — we just wanted to make that clear,” Di Pietro said.

“Things haven’t worked out for a multitude of reasons and there will be a review, clearly, of everything that has happened to lead to this.”

Brebner, who enjoyed a storied playing career with the Victory that included two championships and two premierships, said his position was no longer tenable after such a horrific campaign at the helm.

“The conversation the chairman and I had, we both were on the same path.

Di Pietro said it was undecided at this stage who would take the reigns on an interim basis with a decision to be made in coming days.

Captain Adama Traore saw red on the half-hour mark for a thigh-high challenge on Nabbout and could face an extended ban after making contact with referee Chris Beath’s arm as he argued the decision.

Nabbout then won a penalty, which began Maclaren’s amazing night.

The 27-year-old, playing in his 50th match for City, added four more in the second half to take his tally for the season to 19.

It is just the second time in A-League history a player has scored five goals in a single game, after Victory legend Archie Thompson’s remarkable display in the 2006/07 grand final against Adelaide United.

While Victory are at an all-time low, City’s win lifts them to the top of the table.

But coach Patrick Kisnorbo was eager to emphasise his team was yet to achieve their goals for the year.

“Just because of the result, there are still things that need to be done,” Kisnorbo said.

“It’s a long season. We need to keep working.

“We need to work harder, we need to be more efficient, to improve. There’s no way we’re getting ahead of ourselves.”

Revealed: Disabled Marine Shows Men Over 40 How To Eliminate Weakness And Build Combat Ready Conditioning At Any Age…

A former ethics chief in the Obama administration has accused President Joe Biden of thumbing his...