Seal-ing a friendship: Moment a 200lb elephant seal pup snuggles up to a photographer to give her a huge hug

This is the hilarious moment a 200lb elephant seal shuffled over and cuddled up to a wildlife photographer in South Georgia.

Jess Taunton was on a photographic expedition in Gold Harbour, on the South Atlantic island, when she and her husband Chris Bray came across a group of king penguins.

As Jess crouched down to photograph the flightless birds, a group of elephant seal pups approached the couple.

One of pups broke away from the group and began showing special interest in Jess. 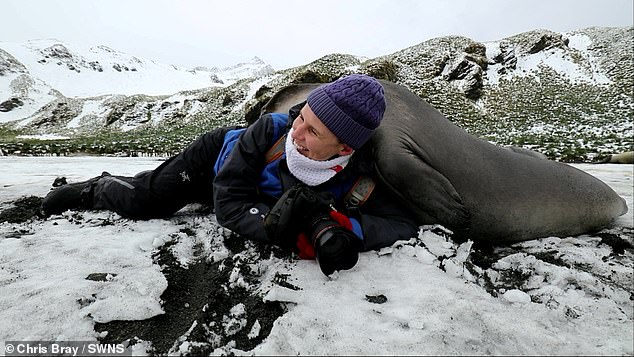 Jess Taunton, pictured, was photographing penguins in South Georgia when she was approached by an elephant seal cub 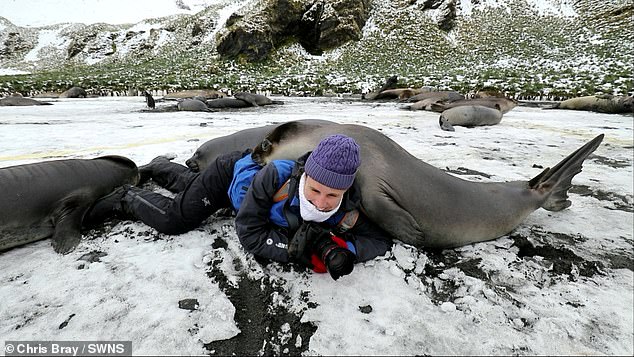 Within a couple of minutes, a second and a third seal came to investigate the Australian wildlife photographer 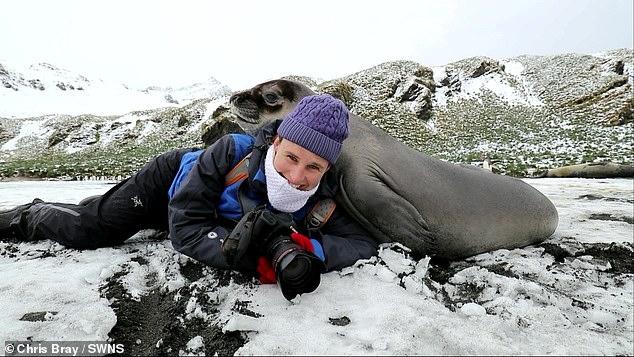 Several people criticised her online for getting too close to the seals, but she said the pups approached her and official guidance says people should not attempt to push them off

The video shows the curious creature repeatedly putting its body weight on top of Jessica as if it was giving her a big hug.

Elephant seals in the area can grow up to 8,800lbs and measure up to 19ft in length.

The first seal was followed by a second and a third who all started laying on the Australian wildlife photographer.

Chris, a geographic wildlife photographer from Christmas Island, Australia, said: ‘My wife Jess was lying down to take a shot of some king penguins in South Georgia when a marauding gang of elephant seal pups decided to flop on over and give her a hug.

‘They’re as heavy as they are adorable, almost.’

After the footage of the encounter from December 2018 was shared online recently, some people criticised Jessica for getting too close to the seals. 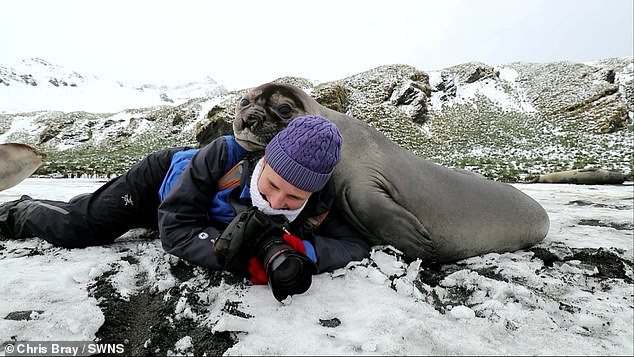 She said: ‘As anyone who’s been lucky enough to go to South Georgia knows, young elephant seal pups like this are almost as curious and brazen as they are heavy’

However, she responded on Instagram: ‘As anyone who’s been lucky enough to go to South Georgia knows, young elephant seal pups like this are almost as curious and brazen as they are heavy.

‘While there certainly are IAATO guidelines (I’m an accredited IAATO field guide) recommending Antarctic tourists don’t approach closer than 5m, no one tells the seals this.

‘If you’re crouching down photographing passing King penguins as I was, it’s not usual for one of these blubbery giants to flop right up and check you out.’

She said the official guidelines warned against trying to push off the seals, as they will eventually leave you alone, often feeling slightly numb.

Jess added: ‘Unfortunately, as when anything goes viral and large numbers of people see it, inevitably a (loud) minority don’t understand what’s actually being shown (and won’t bother to read the caption) and will leap right to the misinformed assumption I must have walked right up and pushed myself underneath this pup to get this selfie.’

There are two species of elephant seals, the northern and southern.

Northern elephant seals (Mirounga angustirostris) can be found in California and Baja California, though they prefer to frequent offshore islands rather than the North American mainland.

Southern elephants are the largest of all seals. Males can be over 20 feet long and weigh up to 8,800 pounds. But these massive pinnipeds aren’t called elephant seals because of their size. They take their name from their trunklike inflatable snouts.

When breeding season arrives, male elephant seals define and defend territories. They collect a harem of 40 to 50 females, which are much smaller than their enormous mates. Males battle each other for mating dominance. Some encounters end with roaring and aggressive posturing, but many others turn into violent and bloody battles.

Sea elephants, as these seals are sometimes called, give birth in late winter to a single pup and nurse it for approximately a month. While suckling their young, females do not eat—both mother and child live off the energy stored in ample reserves of her blubber. Females give birth to a single pup each year after an 11-month pregnancy.

Elephant seals migrate in search of food, spending months at sea and often diving deep to forage. They return to their rookeries in winter to breed and give birth. Though both male and female elephant seals spend time at sea, their migration routes and feeding habits differ: Males follow a more consistent route while females vary their routes in pursuit of moving prey.

Elephant seals were aggressively hunted for their oil, and their numbers were once reduced to the brink of extinction. Fortunately, populations have rebounded under legal protections.