Video .. “Massacre in the Sky of Rome” Fireworks kill hundreds of birds on New Year’s Eve 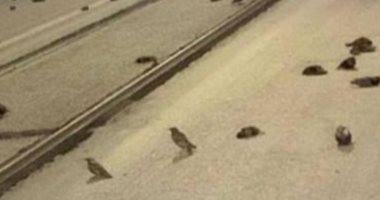 Hundreds of birds died after many people set off fireworks in the Italian capital on New Year’s Eve, according to animal rights groups that described what happened as a “massacre.”

A video of streets near Rome’s main train station showed dozens and dozens of dead birds – mostly starlings – strewn on the ground.

The cause of the death is not clear, but the International Organization for the Protection of Animals said it appeared to be related to the loud fireworks that are fired in wooded neighborhoods that birds use for their nests.

“They could have died out of fear,” said Lordana Deglio, a spokeswoman for the organization. “They can fly together and get lost in each other or get lost in windows or power lines.”

Each year, fireworks displays cause distress and death in the world of wild and pet animals, she explains.

The unusual increase in bird deaths comes despite the city of Rome’s ban on personal fireworks displays, which has been largely ignored, and despite the curfew imposed due to the Corona virus, which begins at ten in the evening.

The Italian branch of the organization had called for a ban on selling fireworks for personal use, indicating its threat to animals.

The Arab Coalition: Intercepting and destroying a ballistic missile fired by the Houthis towards Jizan

SUNDAY, JULY 11To Wembley Stadium for the Euros ultimate between England and Italy. 'Is that this...